In this episode of Ethnis Eats, we'll be covering a lesser-discussed Kajh tradition—pickled peppers. Now, I'm sure everyone knows that one Kajh or ten who goes a little nutty over peppers. Alcohol and peppers are an abiding stereotype and tradition of Kajh peoples, but have you ever learned why?

For almost as long as there have been Kajh, they have been pickling peppers.

As the history goes, Alephus Ashiman—who created and trained the initial Kajh, oversaw the later generations, and ultimately used Therianthropy to become a Kajh himself and aid in the Sazashi Revolution—was an avid fan of pickled peppers, a treat he made himself from the pepper plants native to the region he was working in.

He shared his peppered pickles with the Kajh, and a tradition began. This became such a central part of Kajh culture—culinary traditions were often the only ones Sazashi were allowed to keep in the Ancient Haimarchy—that the Sazashi word for 'being healthy' and 'having spice' are one in the same: Narthu. This is, of course, the third word in the full name of the Kajh peoples: Kajhna Kajhr'ra Nar'rthu.

Interview with a Kajh Chef

Nobody gets the peppers thing. To them it's eccentric that we love peppers so much. But it really goes back, all the way past Valuserran segregation and right on through to the Ancient Haimarchy. See, Old Mountainsoul—Alephus, if you like—Alephus loved pickled peppers and he shared them, he shared them among the early Kajh and the generations which followed. Some want to ask why, maybe pick apart that perhaps it was a guilt thing. I don't pay much mind to that. It doesn't really change the modern context, does it?

So he shares these pickled peppers, and some of the other Kajh—those who find the time to do so, and whose roles gave them access to dirt to grow their own peppers in—these Kajh start growing and pickling their own peppers. And they're doing it in their own way, and sharing with each other, and some are sharing with Alephus, and it's all, you know, it's all very mutual and sweet.

And of course that's how traditions start. Because that kept right on through the Revolution, and we were independant we kept up the peppers thing. It became a family thing. Which became a family pride thing, so you end up with contests and cookbooks and farms and famous pepper growers and, huah, so much. It grew.

Bring us forward to today. Everyone is spread out over hundreds of worlds—how many are we up to? And we've been estranged a dozen generations or so. And cultures and ideas have drifted but for us Kajh the peppers thing is still there.

You know this? I can meet any Kajh from anywhere in Ethnis and we'll be speaking different tongues, and maybe he's got green fur, or an extra thumb, or something, but I guarantee I can offer him a pepper and he'll be laughing and smiling and offer one right back. Did you know that? Test it. That's how enduring this tradition is.

Everybody's grandmother has a special family recipe. They're all amazing, but mine has the best.

Few family's pickled peppers reach commercial distribution. This is seen as being against the point. Recipe books, and each of the constitutent parts of the craft—differing jars and spices, for example—are staples of the Kajh section of any mixed market, but for a Kajh to regularly buy pre-pickled peppers is seen as robbing themself of their culinary history and a meditative hobby.

Visit any port in Ethnis and you'll find at least three shops dedicated to pepper pickling. Three walls of the shop and half of the fourth will be dedicated to all the tools and ingredients you need to make them at home, even aboard a cramped Wayship—that's where all the Kajh will be.

That other half-wall? That's where you'll find everyone else. That's where the premade stuff is sold. Usually it's a counter with a trough full of them, and you pack your own jar or can just buy one as a sample. If a Kajh is there, it's for a sample because she wants some ideas for her own peppers.

Unless there's a shortage, and often even then, Kajh aren't stingy about sharing their peppers. Few can handle the raw, awesome, mouth-blistering heat of a Kajh pepper, whose spice levels range from eye-watering to thermonuclear, so it's an offer that few people take up more than once.

For those with the audacity and wherewithal to stick with it, however, a world of social opportunity opens up. Despite how widespread pickled peppers and Kajh are, few outside of the Kajh engage in the practice, let alone understand its deep ties into Kajh culture.

You want to make friends with a Kajh, maybe even see him weep for joy, make your own peppers and keep a jar of them sealed and handy.

Friend of mine was going for a social outreach position with a startup company over in Midtown and he asks me for advice since the company owner, a Kajh, was going to interview him. He knew that us Kajh can be... tough customers.

So I told him 'what you do is you take all these ingredients, and this jar, and you take it home and you follow this recipe, and during the interview you offer him the jar of pickled peppers'. And I explained to him, why, of course. Because it's useless if you don't know why.

So he arrives to the interview, nearly breaks his hand shaking the Kajh's hand, and he offers him the peppers as gratitude for taking the time to interview him. Way he tells it, the guy practically wept. He got hired, of course, because as far as the guy was concerned, anyone willing to take the time to understand your culture and make you a cultural treat is exactly the sort of person you want in outreach.

His peppers were mediocre, by the way, cause it's important for you to know that that's not important.

Written and made public for WA Summer Camp 2020, this article is the sort which is normally only visible to Supporters of the Adept ($5) tier and up. 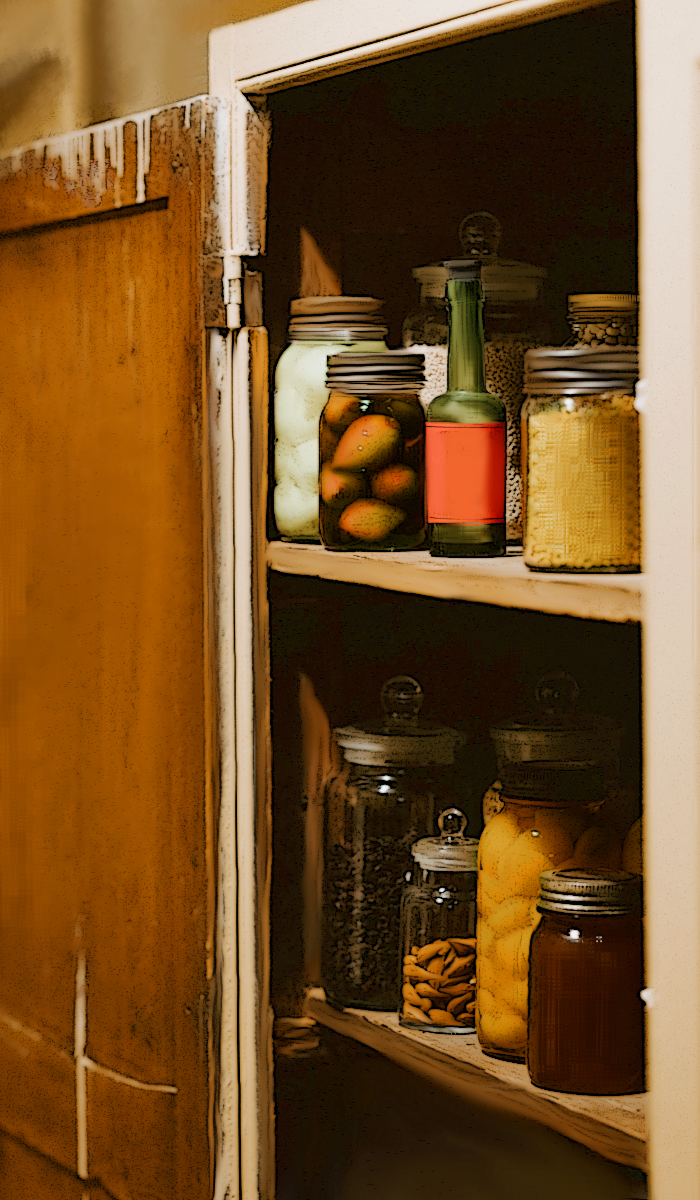 No Kajh home is complete without a pickling pantry. It is customary to leave it open when friends are over, as decoration.

Alephus Ashiman, an avid culinary hobbyist, first made pickled peppers after setting up shop in what is now Kajh-Tai of Jhoutai and beginning to construct the first Kajh.

While modern recipes are more flavorful, most Kajh make them Mountain Style at least once, often in early adulthood when they are first learning the process.

They make it Mountain Style, then follow a family recipe, and are taught the history that lead from one to the other.

All ingredients and their names are approximated into English, as Jhoutai shares no direct ingredients with earth before the Advent War.

It is considered rude among Kajh to not offer a guest some of their pickled peppers, and for the guest to deny it.

While this offer is always given to non-Kajh as well, it is not seen as nearly as rude for a non-Kajh to deny the offer, as it is understood that Kajh tend to eat much more spicy foods than anyone else can handle.

Kail is a drink as common to Kajh as pickling peppers are.

It was made by someone attempting a new kind of pickled pepper. They dehydrated the meyfar peppers in salt, then left them in a juice which was halfway aged to wine, in the hope that it was far enough along to pickle the pepper.

As a last step they introduced a strong yeast, creating a potent, bitter, and spicy wine-ale hybrid: Kail.

Answering: "Write about a food-focussed event in your world and describe how it's celebrated."
Visit Ademal's Competition Page Check all other answers to this prompt Competition Homepage

Join Ethnis Discord!
This article has no secrets.

I like to keep certain readers in mind when writing an article, and this one goes out to Glorix, Gorkam Worka, Hephaestus, and Barron.

Special thanks to SolarCat and Amy Winters-Voss for catching errors!

I love this! What a beautiful way to Worldbuild a culture. Food is definitely a central part of society (I am trying to add more myself), and making a single item a backbone of social interaction is awesome and I love it.   Also the note that the one guy's peppers were mediocre, but that's not the point, really drives it home.

I'm really glad you liked it! Thank you for reading!