GHG Session 10: No Thanks, Jezebeth

Month 8, Week 4, Year 918
Rested but still bruised from last night's fight with the poltergeists, the Fortunate Five decided to spend the weekend in Ardin before heading out to some of the more haunted sites Jezebeth had told them about. Ysmyrelda went out shopping for some holy water and healing potions from a very tired shopkeeper while Windred crafted a couple healing potions herself for the journey ahead. Bubbles spent the day studying glyphs with Jezebeth, learning about the components for 'Ray of Enfeeblement' and nearly getting crushed by a strange-looking warforged with a crystalline head.    Phaedra and Zan'kiri went out hunting for some more spirits to add to the party's collection, leading to some close calls like when a poltergeist slammed Phaedra into the side of a building and knocked her unconscious. But apart from that and the destruction of a nearby building the day's adventure was a success, and the yuan-ti bard even got a glimpse of her ally's necromantic abilities.    Meanwhile Argus took the day to look for an expert on Elflands history in the region. Fearing the life-draining power of the ghosts, he wanted to get all the help he could get to keep these spirits at bay. Old Man Bobbin proved more than eager to discuss his favorite subject, and in exchange for a delicious rum-punch recipe he gifted Argus with a pendent from the coronation of Emperor Polonius Avon III. This nearly 500-year-old relic represented one of the last moments of unmitigated joy and national pride in the Elflands Empire, hopefully enough to put elven spirits at ease.   That night the party regrouped over drinks at the Sandbox to discuss their findings while another night of storms raged on outside. After her day of instruction with Bubbles, Jezebeth felt comfortable enough to show off her pet project to rest of the party: the aetherforged. A construct based on early warforged prototypes, the crystalline head could be used to store the souls of elven spirits haunting the region and put them to rest. Not since Queen Astrid offered to join the Royal Knights Brigade on their journey to defeat the Sunken God has an idea been met with such damning indifference from an adventuring party. Zan'kiri stated flatly that the aetherforged would turn against their creators in the blink of an eye, and many in the group expressed skepticism at Jezebeth's arguments that the Ageless One would stop corrupted souls from inhabiting the bodies. It was one of the only ideas offered up so far to deal with the undead in Southern Pescat, but many feared that it would cause more problems than it would solve.    Frustrated, Jezebeth spent the night drinking with Argus while the rest of the party split up to their separate rooms. After one more day in Ardin the real journey would begin to hunt down what was riling up the spirits. 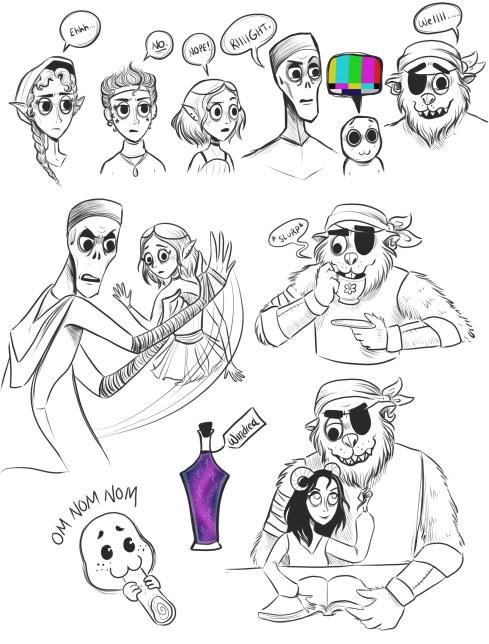