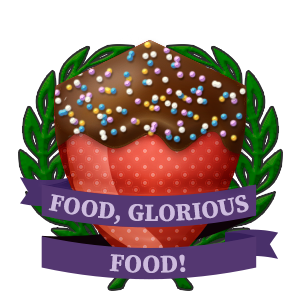 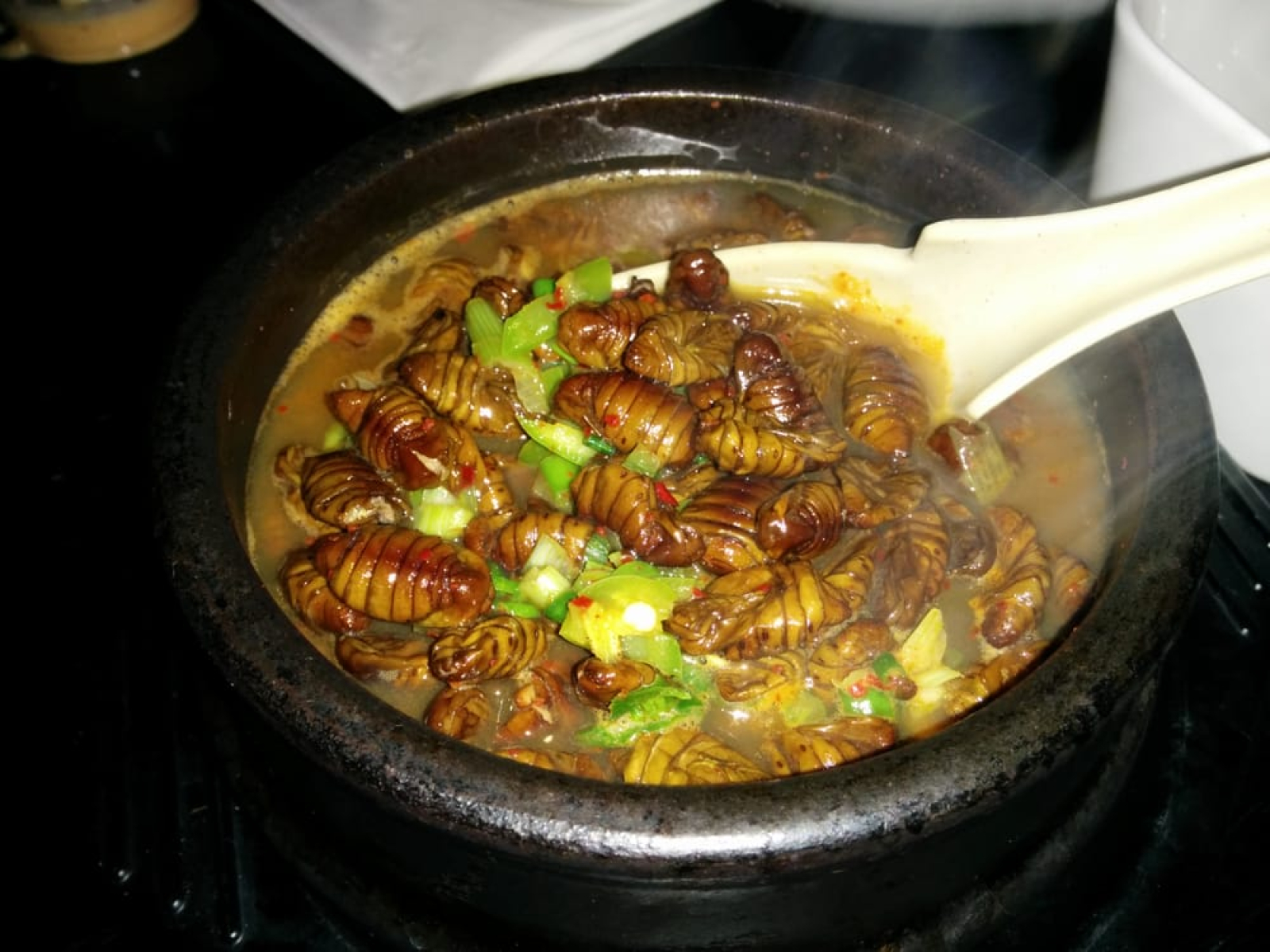 Chnagahn is a simmering stew served in large cauldrons kept over open fires with raw ingredients dipped into the broth to boil before consumption. It is a popular dish across Araea as more than just a meal. To host an Chnagahn is an event, eaten in groups or enjoyed at parties and celebrations.   When all the food has been boiled and eaten, the last of the broth served as soup and the cauldrons emptied, the festivities are signaled to draw to their end. 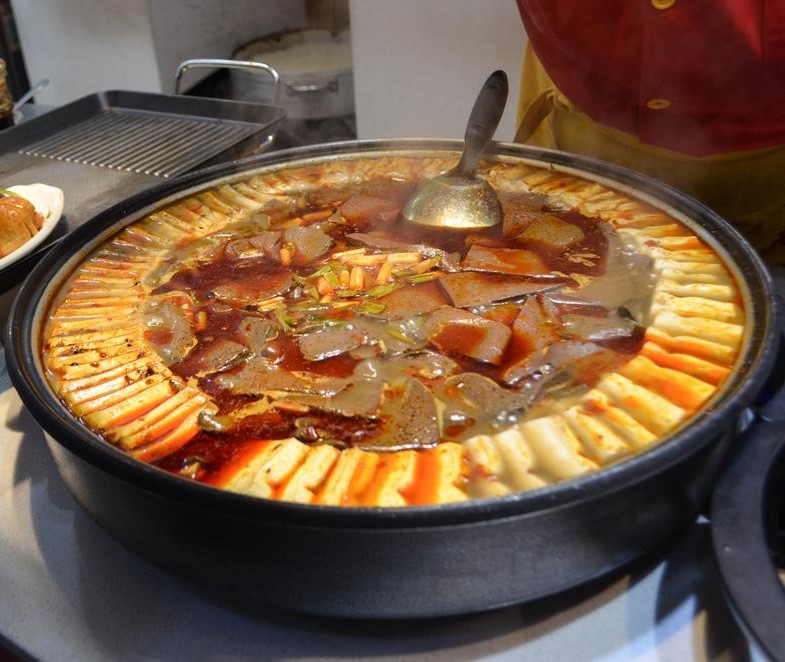 The first step to making Chnagahn is to make the broth. Water is boiled with bone and mushroom to create a heavy stock, then seasoned with flavorful fungi and animal blood. The broth is kept heated once served, with the flavor of the stew changing as ingredients are dipped, boiled and added throughout the meal.

Some chefs insist on the traditional recipe for Chnagahn and consider any alterations to this age-old recipe to be sacrilegious. Brawls have broken out between competing schools of culinary thought over what kind of ingredients are acceptable. Everyone has an opinion of how Chnagahn is supposed to be served - everyone.

The other ingredients are added raw or with minimal preparation. They are submerged into the stew either piece by piece and eaten individually, or left in the stew to boil and later eaten with ladle or spoon. The common variant of Chnagahn use Skarok bug in their larvae form, diced or whole slug-fish, a variety of mushrooms and fungi, lizard organs and thinly sliced meat. Many chefs have their own favorites they include, like spiders or other kinds of meat when available.

Chnagahn is a popular dish and enjoyed by nearly everyone. While some of the very wealthy consider it a peasant's dish, to say so out loud would be a black mark on their social standing. To say "he doesn't like Chnagahn" is to levy a subtle condemnation of someone's character and good taste. But the stew is most commonly consumed by the working and middle class. At the end of a long week of work, Chnagahn is a pleasant and relaxing comfort enjoyed with friends and plenty of alcohol.

The larger the party, the larger the pot   The size of the Chnagahn is a way to display ones wealth and generosity. People compete with one another about who can host the best Chnagahn as a sort of social status sparring.   But competing chefs must be wary not to go bigger than what they can manage: there is nothing worse than watery Chnagahn.

Informal Chnagahn are community affairs. Neighbors or work-teams all contribute to the ingredients needed to dip into the boiling pot, while one or two people prepare the broth and fire. Those skilled in the task typically end up reprising the role and are greatly appreciated for their particular talent for preparing their part of the meal. People who decline to attend the Chnagahn are only excused once. Those who do so repeatedly lose standing in their community and people begin to look on them with suspicion.   The whispers start: "he doesn't like Chnagahn".

A common way to end a feud or quarrel is to invite the other party to host a Chnagahn together. The ensuing feast is a carefully choreographed ritual, where the feuding parties are expected to sit together, drink together and eat together. At the end of a successful Chnagahn and in the eyes of all those there to witness it, the feud is put to rest.   It is considered exceptionally poor form to dig it back up after such a feast.

Sidedishes and Snacks   Vinhnh mushrooms are a popular treat to go along with the Chnagahn. The sponge-like mushrooms are dipped into alcohol until they've absorbed as much as they can before being dipped into the stew and then eaten.

Chnagahn has spread to almost every corner of Araea and each region have made their own mark on the dish, adjusting it to fit with the ingredients available to them. While the broth is generally the same, with different bones used depending on what animals they have around, the ingredients for dip-boiling can vary greatly.   Some common variants are:   Chnagahn-ika is commonly eaten by the city-states that live near the Abyss, adding seafood to the menu. Squid, shrimp, crab or sea-urchin are popular and sometimes added live to the boiling broth in cages, while thinly sliced fish of any number of variants are very popular.   Chnagahn-Rã is eaten in the Outer Shell near the Surface and substitute the ingredients of the depth for what they can scavenge from the Surface. It tends to feature less mushrooms and more questionable plant-matter. Sometime derisively referred to as Blight-Broth by chefs from the Inner Shell and it is a title not entirely unwarranted.   Chnagahn-Pai is either an abomination against Chnagahn or the highest culinary experience, depending on which chef you ask. Pai is the Chnagahn of the wealthy and substitute "lesser" ingredients for more expensive one. This variant is rich in meat, fat and rare treats like the Gar'ro'dah. 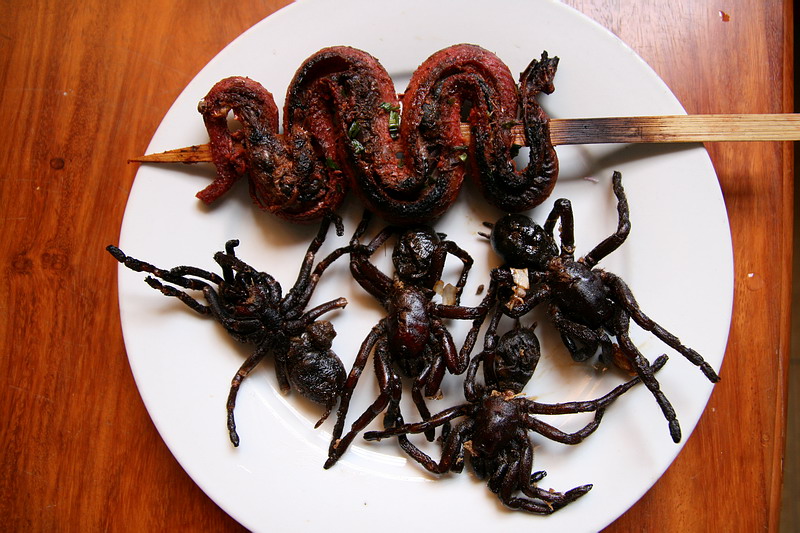 In addition to flavors from bone, blood and mushroom, Chnagahn is sometimes given extra kick by the addition of psychedelic seasoning. These are added into the stew and are sometimes an alternative to alcohol at the Chnagahn party.   These seasonings are usually mild with pleasant, sensory-warping effects such as enhancing taste or smell, changing one flavor for another or mild hallucinogenics. More powerful narcotics than that are reserved for very particular occasions. 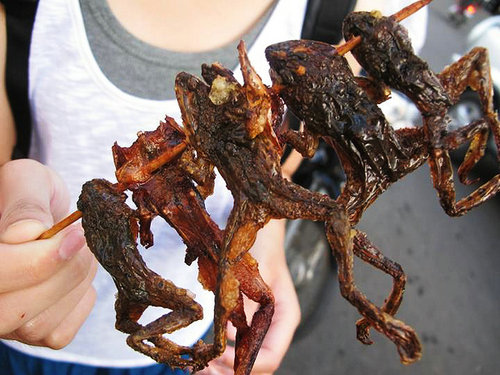 I made many expressions while reading this, most of them grossed out, and yet I've reached the end of the article to find myself somewhat envious that your people have such a binding and wholesome tradition.   They wouldn't think highly of me, though. "he doesn't like Chnagahn"   What sort of drink would you pair with this? I imagine as such a staple feast it has its impact on the economy and on what is considered necessary in a kitchen, is that true?

You might enjoy Chnagahn-Pai more: much more meat, much fewer bugs. ;D   Either weak fungi-beer or strong fungi/mushroom spirits, usually. Brewed drink are safer to drink then straight water, so that tends to be the traditional thing.   And yeah; you can make a living being the crafter who makes Chnagahn pots, for sure. There's inns with particularly good pots, etc. The pot is the big draw, as far as tools go. Otherwise, it's knives and ladles, pretty typical stuff (plus bug-skewers, I guess? :D )   Thank you for the comment! I'm glad you enjoyed the read. <3

Agreeing with Ademal on this one. It's not something I'd want on my dinner table but holy crap the amount of effort that went into tying it to the culture is superb. I also like the idea of the 'spiked' Chnagahn using some more powerful ingredients.   The way that the affair is so community tied reminds of some Ethnis Trivia I wrote a while back, and that's a good thing! Is vegetarianism a thing in Araea? Is there a Chnagahn that is more suited for folks who dislike bugs? I see the Pai varient you mention in Ademals comment.   Keep up the fantastic work Qurillion!

Thank you buddy! :D I appreciate it!   Vegetarianism isn't really an option unless you are pretty dang wealthy; food is too scarce to be very picky. Some do for holy-man-on-the-mountain type reasons. But that's about it. It's uncommon enough that there's not really a veggie-pot version.   <3

Not going to lie, I would attempt to create this hot pot and eat it too! There were lots of mention of different meat, so I couldn't help imagine what other flavors would intermingle with all the different meats like sources of acid and salt to make meat tender or to cut through fatty bits. That psychedelic seasoning is intriguing though! Does it have any taste or does it just trick the brain into different taste sensations?

If you do, I would love to see pictures of that. XD   In real life, there's a pill made from miracle berry that turns sour into sweet. Some of the psychadelics might of of that variety, turn acidic food into buttery, etc. Definitely some of that. :)

I'm not going to pretend this looks particularly appetising, but it's a great idea! I love the cultural variants you've added into the article, it makes it feel really realistic and grounded. What was the origin of this dish?

In-setting or out of it?   In the world, it probably came from communal meals where they threw whatever they had into boiling water to try and feed everyone.   Out of it, the main inspiration for the dish is the hot pot and just eating big bowls of stew with my family, pretty much. :)

The article is amazing. The amount of detail that is put in the article makes my stomach turn. But I have one question, how much does it cost to make the meal? I don't mean the exact price but how costly the meal is. The reason I say that is because it might affect on how the world might view the dish. If its cheep why would they bother making it a cultural custom? If its expensive why wouldn't the higher classes not eat it? If the price is just right how did it become popular?

It is a reasonable expense, which is why it is so popular. The cost of the quantity required is cut down because it is typically spread out over all the feasters.

Honestly, just looking over the article, it's for sure a bit stomach-turning. But the amount of depth put into the entire thing makes up for it for sure. Love that you even made a few variations of the dish with different names!   I'm just curious about a bit of history of the dish, what caused the creation or naming of dish and if any people of your world actually don't like the idea of eating lizard organs and so on... Otherwise, good article!

It probably has its origin communal meals where they threw whatever they had into boiling water to try and feed everyone, back in more tribal days.   Food is scarce in Araea: almost all of human civilization exists underground and the surface is a blasted, irradiated wasteland. Lizards and bugs are the most common sources of meat there are, so it's either like that or starve. On the plus side, both organs and bugs can be delicious.   https://www.worldanvil.com/w/araea-qurilion/a/cuisine-in-the-caves-overview-article