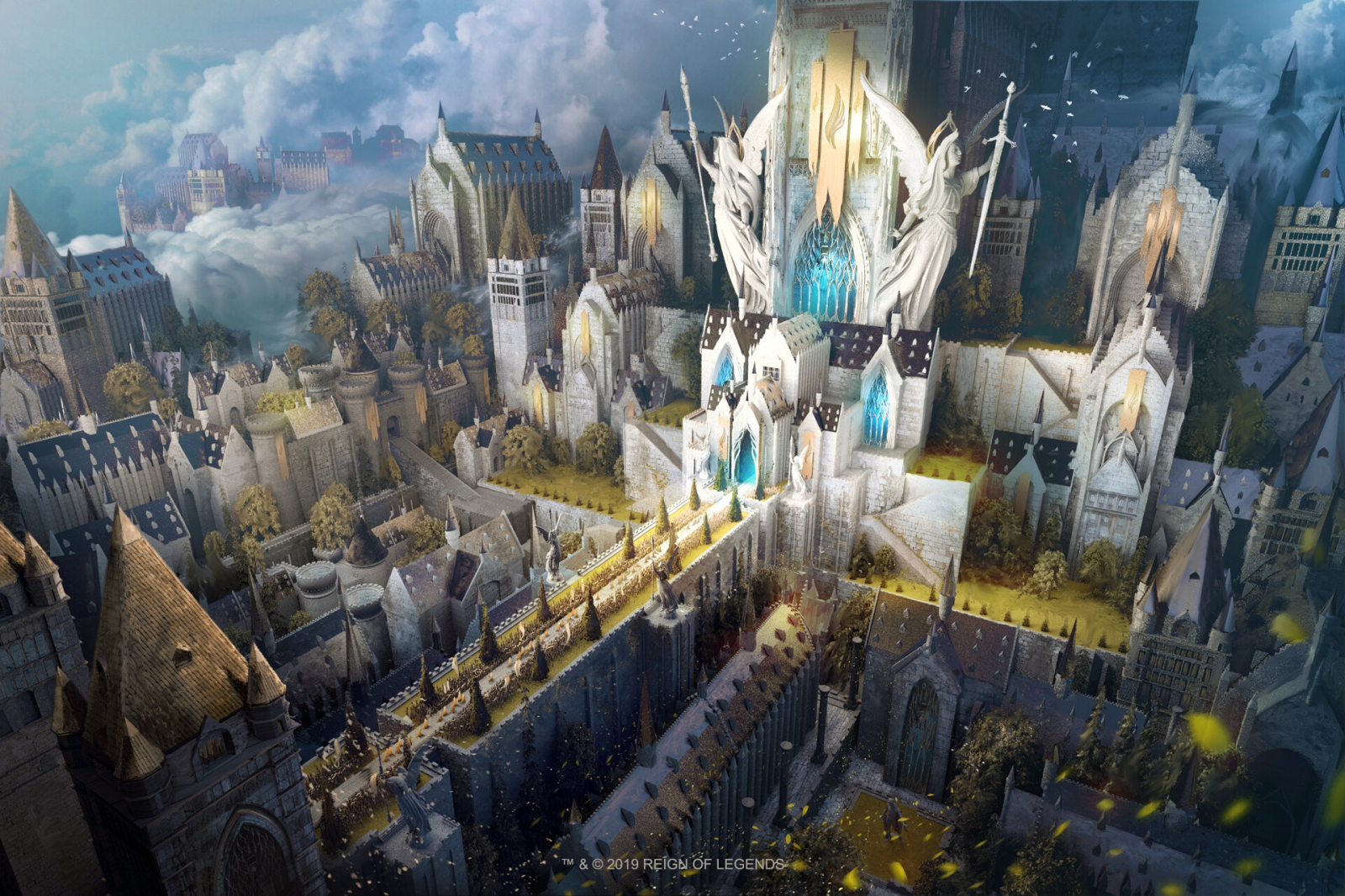 The Country founded by the High Lamia, forerunner of Zheng-Kitaran culture

Sitting atop the government of Raoulin is the God-Queen Kyra Aenai, who has ruled absolutely since the country's inception with no signs of weakness or vulnerability. She alone holds sole power over every aspect of society and the government, holds sole control over the military, and dictates the rule of law within her lands down to the finest degree - every other position of power in the government is doled out at her express whim, and even the nobility only hold power because she allows them to.   The nobility of Raoulin, though it has waned in recent years, still holds formidable power and is divided up into the following classes:

Additionally, nobles are generally distinguished by another category - the age of their status and how far back their nobility can be traced.

There are two kinds of titles used by Raoulish nobles - personal ranks, and titles of station linked to their owned lands. These are used to provide an organized hierarchy, but are not the sole deciding factor - for the Raoulish nobles, seniority, alliances, offices held as well as their illustrations(record of deeds and achievements) all play a critical role in determining hierarchy. However, to the uninitiated, these provide a basis for the hierarchy.   Additionally, there is a notion of "The Great Officers" - these are the highest ranks of Raoulish society who typically serve on a cabinet directly advising the God-Queen. Also known as some of the most powerful individuals in the country. They are all considered part of the "High Nobility"(See Below).   Titles:     Ranks:

The culture of Raoulin is one of deep appreciation for fine food and drink and all the Culinary arts - as one of the most cultured nations in the world when it comes to food culture, Raoulish are very picky and knowledgable about such things. They are also deeply appreciative and knowledge about clothing and fashion, as both are big parts of their everyday lives - fashion, fancy dress, food, drink, and how one carries themselves are all crucial parts of Raoulish culture and society, from the lowest peasant to the highest noble.   They are also a bit xenophobic, but only minorly - they simply have deep ingrained pride in their way of life, their food, clothing, and culture, and dislike outsiders coming in and besmirching it with ignorant attempts to make it their own.   For more information on their culture, see the page for the Raoulish ethnicity.

Born out of the chaos of the Age of Apostasy, the Kingdom of Raoulin was formed after the God Queen of the High Lamia, Kyra Aenai, had a change of heart and saw the ways of the spirit kings - converted to the ways of Zheng-Kitar, she went on a crusade to rid the land of her corrupt sisters who refused to convert with her, cleansing the land of their presence until only those who had remained true to her and her newly found peaceful ways remained.   Now free of her old ways of slaughter and genocide, Kyra Aenai soon formed the Kingdom of Raoulin out of the renmants of the enclaves she conquered of her kin - a kingdom dedicated to giving her people a safe and peaceful place to settle down and start a new life, free from the genocidal shackles of her people's past. Ever since, it has stood as a bastion to those who would seek to escape the shackles of their past and live a normal life - even the occasional Orc comes to Raoulin to live a normal life, burdened by their Blood-Curse as they might be.

Most of the population of Raoulin is made up of Lamia and High Lamia, with other monstrous races like Bomujeo, Orcs, Guīmogoa, being somewhat common as well. Humanoid races like Humans, Elves, Dwarves, and more common races are the least common here, for the simple fact that few can stand to live alongside monsters, though more have begun immigrating in recent years.

Raoulin's military is formidable but as not as extensive as some of its neighbors - they maintain a healthy amount of chilvalric orders(Professional Soldiers), and unlike most all other countries on Zheng-Kitar, their military is 100% professional and based solely in the Knight and Chivalric Orders that dot their country. This makes their military small in number, but extremely formidable in terms of power. In truth, it is the immense personal power of their more monstrous residents such as the High Lamia that wards off most would-be attackers, though their military is mighty by itself.

Freedom of Religion is one of the rights exercised by all citizens of Raoulin - there is no central state religion, though the most powerful and plentiful ones are the churches of the twin elemental lords of light, Amnasol, The Lambent Overlord and Vidixath, Lady of Luminescence - the faith of the Spirit King of Light Guanyong is popular in Raoulin as a whole, and the followings of the two Elemental Lords of light are the two biggest faiths in the country, as the people of Raoulin consider the God-Queen Kyra Aenai to be a divinely chosen monarch, and direct emissary of Guanyong. The sun, therefore, is a very popular symbol used on Raoulish architecture and garments.

Raoulin, as a peaceful nation not predisposed to violence, only reacts to violence when it is done upon them. They have neutral relations with all of their neighbors aside from The Danzou Theocracy, who they are on terrible terms with in a near-eternal Cold War.

Raoulin's agriculture is enough to sustain itself and then some - it produces a great surplus of crops from its yearly output that allows them to export it for a profit.   Additionally, its textile and clothing industry is absolute booming and is by and large its biggest industry aside from its food and drink - the textile mills of Raoulin is where the world's softest and finest cloths are made, and the sheer volume that the country can produce leads some to believe that the way they do so is utterly supernatural. Regardless of the mysterious means, their textile industry is their greatest asset, followed only closely by their fine food and drink, whose ingredients and even full dishes are exported to other countries by far off nobles and kings and queens.

The roads of Raoulin are top-notch well-laid cobblestone, which allows for goods and people to move around quickly inside its borders.

Born anew, as one.

A nation of monsters 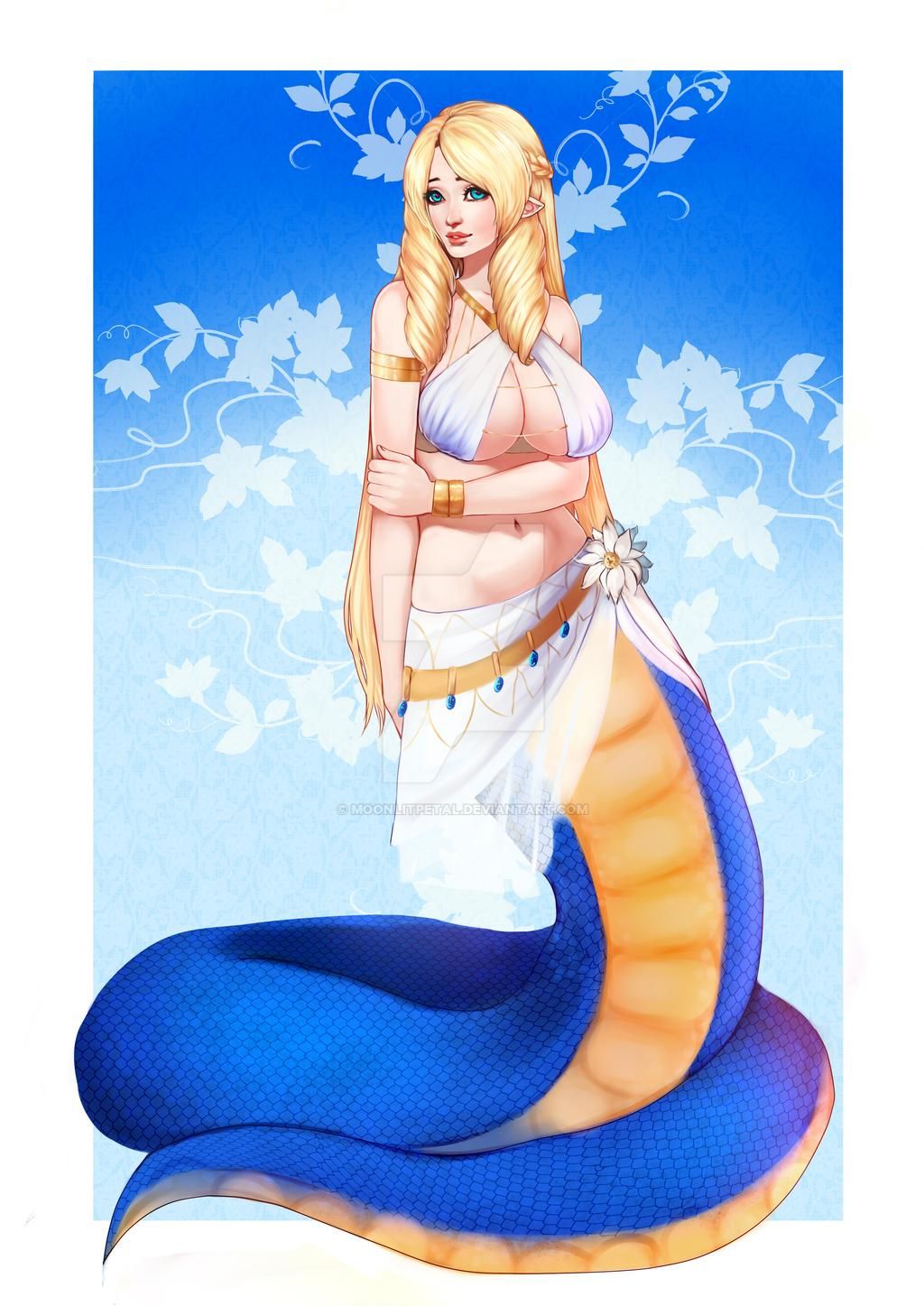 Despite its high standard of living and cutting-edge cuisine, architecture, and clothing, Raoulin stands as a nation few can stand to live in because of its unusual denizens and strange customs - as a nation founded by the High Lamia many centuries ago, it has become home for them and their lesser descendants, the Lamia, ever since its inception long ago. And though these enormous snake-women are not the country's only residents, they are the most numerous - meaning that though they have for the most part found a place as a relatively nonviolent people, their reputation and monstrous appearance means that their nation has mostly attracted the attention of other monstrous people who wish to live a similarly nonviolent life, far away from the bigots who would kill them for their mere nature.   So, with a majority of the population made up of all manner of monsters, it is little wonder that relatively few more normal humanoid races can be found here living on a permanent basis - the notion of living beside monsters beneath the rule of the country's eternal ruler, the High Lamia God Queen, means most come here as tourists to sample the wonderful cuisine and try out the beautiful clothes. However, for those who can stomach settling down beside monsters, one will find it a fairly wonderful place to live where relative peace and safety is assured - so long as one follows the relatively strict rules and abide the close watch of the God-Queen in one's life at all times. Otherwise, one might spend time in the rather unique jail system of Raoulin - a place none desire to be for long.

The original, near-extinct ancestors of the Lamia.

The Country founded by the High Lamia, forerunner of Zheng-Kitaran culture.

The seductive, serpentine predators of the world.

The various weapons unique to the Lamia species.

85
Perhaps expectedly, the two countries on Zheng-Kitar run by divine beings have become extremely close to one another as time has gone on - Kyra Aenai and Amenmeses Ra-sen Shakanasa I have gotten along splendidly ever since the first of Tarthus-Tetsu's extraordinarily lavish treasure fleets arrived in Raoulin's ports, offering extremely generous gifts in exchange for comparatively humble and reasonable trade deals and offers of alliance.   Though initially welcomed with suspicion, Tarthus-Tetsu's envoys and their Pharaoh who led them met with the God-Queen of Raoulin and quickly hit it off as none had quite done before with her, who made their first and ONLY alliance in their nation's entire history with the formal ratification of the two nations' alliance into treaty form. Ever since, the two have become incredibly close, and supported each other economically, socially, and militarily - making them a Power Duo that none have dared to attack for fear of provoking the two mightiest nations on the planet. Though unconfirmed, it is also believed that the two rules support each other personally as well - acting as very close friends as otherwise lonely beings isolated by their own immense power and semi-divinity.

50
The two countries of the Coalition and Raoulin have been neutral since almost day one - neither side is the type to provoke, so they have sat side by side as nonhostile trading partners and amicable enough allies for decades and even centuries.

35
Though they do not quite share a border, the barbarians of Kassau have formed a tense bond with the lands of Raoulin - the two lands quickly bonded over their female-centric societies(Though Raoulin is much less so), and thanks to Raoulin's progressive culture and dislike for imperialism and expansion, the two powers agreed to non-interference and made a peace agreement that has lasted ever since it was forged a century ago.   Additionally, though unconfirmed, it is believed that since both countries hold an immense dislike for the Danzou Theocracy, there have been talks of an alliance to crush them, but nothing has been finalized yet.

-50
Though the Theocracy took the city of Valennin some centuries prior in an Offensive which resulted in the death of Kyra Aenai's only daughter at the time, the two countries have not devolved into open warfare for mostly one simple reason - after the offensive, neither side wished to pay the toll it would take in lives to finish the fight.   So, they now sit in a cold war of sorts, trying to scheme and goad the other side into starting the war anew so they can use it as a Casus Belli to launch a pre-emptive strike that will hopefully claim victory in the war.
Countries