A particularly mountainous area, Oaken Rift was the site of The Light fall on Daxu. It was also the home of many of the original Sky Elf settlements, as the Light brought air currents to the world the Sky Elves found it a particularly convenient area to live in as they were able to launch themselves from various high perches and soar across the forest.   Some of the highest mountains are devoid of trees and here the Sky Elves made their home, glittering towers of marble and glass like glorious pearl nests where they could survey the entire forest from high. It also served as an early warning for anyone coming through the light. Many a traveller would materialise from Light fall and suddenly find legions of sky elves soaring in above them having launched themselves off the cliffs above.   Now Oaken rift is just another area of Daxu, the mountains providing a ready rich source of stone and ores have become heavily industrialised. Oaken Rift is seen as a running joke with the peoples of Daxu, every year the city grows a little larger and takes over a bit more of the forest. So much so that one of the lower tier jobs available to unskilled menials is as a member of the so called 'Burn Gangs', these people are drafted in to burn back the forest with flame, defoliant and hydraulic axe. These gangs burn back the forest to maintain a gap around the city and allow areas for developers to build into.   Due to the vicious nature of the flora and fauna around the city the first step of making the land safe for building is usually the introduction of one of the great Progress Class Land Clearance Vehicle. These particular devices are let loose on the burnt down ground to churn up any roots and extract the first 10 metres of soil around the area, this is then filled in with concrete to stop the plants growing back and seal any nests of underground predators.

An area of vast mountains that are now being carved up slowly for concrete and building materials, some of the mountains have been whittled down so much that there is a particular mountain 500 meters high and 500 meters on each side, a sheer cube of rock that shrinks every year.   The rest of the area has been flattened as much as possible creating a city of large circular areas of city separated by walls, from the air you can pick out where the original city was and how it has grown over the years. You can also see how very few green spaces there are within the city limits, the largest park being in one of the higher and more affluent areas of the city.

Inside the city the only flora and fauna available are imported from other areas and planets for exhibit in the zoos and indoor gardens.   Outside the city is some of the harshest forest on Daxu, this may be a byproduct of the Light fall but it cannot be proven, here you can watch the vines grow back day by day, the burn-gangs are in almost constant operation to keep the plants at bay.

The mountain ranges are a great source of rocks for grinding up for concrete, there are various ore veins running through and under the range providing a decent supply of common metals.   There is also a good import of wood from the forest area around the city. 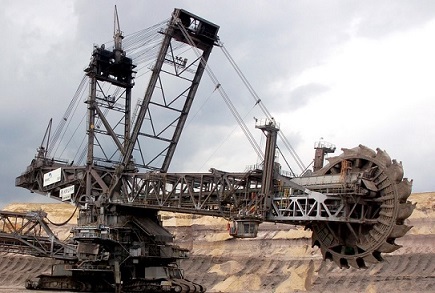 One of many dozens of Land Clearance Vehicles on Daxu, these monstrous vehicles are designed to eat mountains and spit out ores and rocks for use in metals and concrete. Oaken Rift operates many of these for keeping the forest at bay.