During the month of Harvesting, 2998 E.Alz, a massive flood destroyed the fisher town of Deep Cue Garn, on the northwest coast of the Thaur Island. For 16 years, the town laid abandoned and rotting, covered by a thin layer of sea salt that prevented any plants from growing on the structures, before it was slowly repopulated after the fall of Goldwaste City during the High Rust.   However, one of the buildings suffered a particular destiny that allowed it to be reclaimed by nature despite the salt: An old wooden building that served as a small museum for the town, where both art pieces from the town's inhabitants and historically significative items were stored, was lifted from the ground by the water, and dragged back into the sea a short distance from the coast, where it sank leaving just bits of the roof above the surface during low tides. 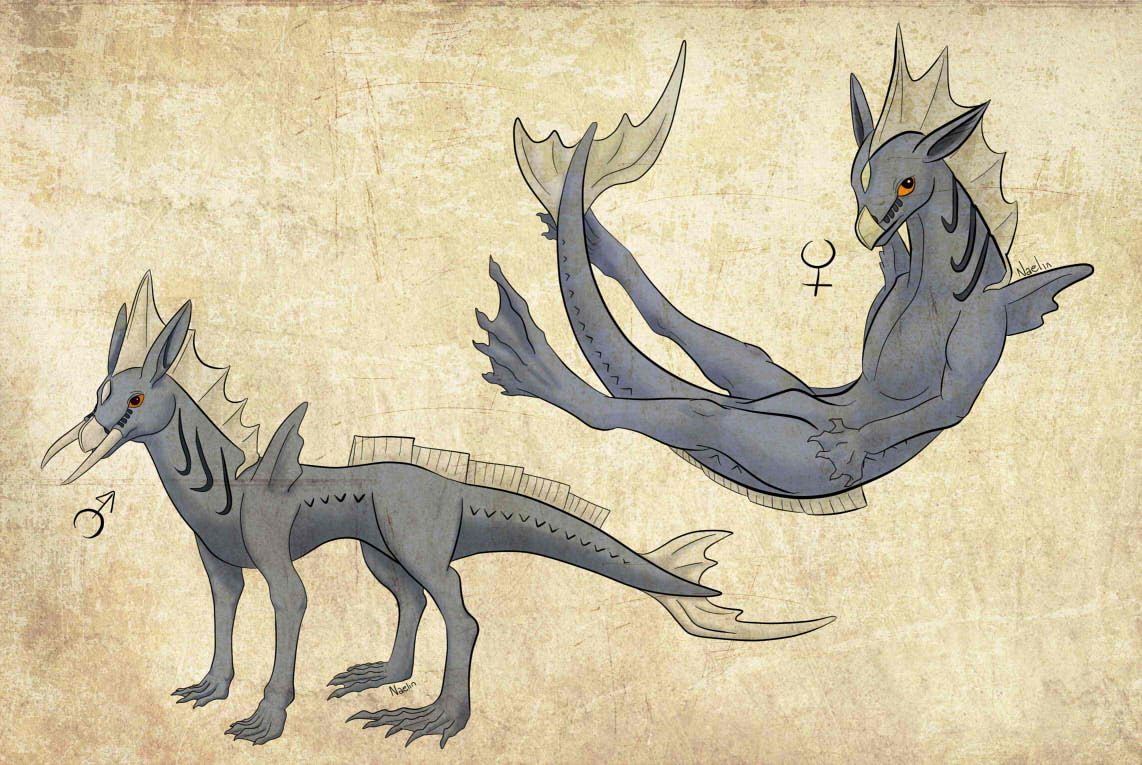 Endeler by Naelin
In a short period of time, the building, complete with the art pieces and artefacts, became populated by sea creatures and fauna, and in just a few years it became a little ecosystem with life clinging to every corner and filling every vase and statue. Endelers can usually be seen perching lazily at the top of the roof to get some sunlight, before preparing to try to get through the door and windows to get a meal out of the smaller creatures that call the building their home.   While losing their art and historical pieces was a hit to the townsfolk' cultural identity, and the flood was a terrible tragedy, after the town was repopulated on recent years the inhabitants grew fond of the sighting of this structure that they now call the Submerged Museum, which sometimes the few waterland silkies from the town attempt to explore and, in rare occasions, bring back some of the items trapped in there. However, for most of the items there is a certain level of agreement that they are now a part of the sea and should stay where they are, filled with new life.
RUINED STRUCTURE
16/02/2998 E.Alz
Type
Museum
Parent Location
Deep Cue Garn
Owning Organization
Kingdom of Thaur

A town west of Thaur ruined by a flood and abandoned, to be repopulated 16 years later after the High Rust

Deep Cue Garn
In response to the prompt Describe a ruined structure that nature has reclaimed. What was its original purpose?

Nice article! This building add a lot to scenery and the lovely symbiosis between creatures of the sea and Societarians, it is very interesting too.

God I would love to swim around that temple, it sounds like a breathtaking place to explore.

Careful with the fishies biting your toes!   Thanks for your comment Badger <3

This is such an interesting idea. I like the detail about seasalt preventing plants from growing, and I like that sealife has moved into the old museum. RIP art. :(

Thank you Emy! At first, I thought about using a surface building from this town for this prompt. But then I remembered Villa Epecuen, an actual town (Here in Argentina) that had the same fate of Deep Cue Garn. The pictures from that place are breathtaking: 35 years have passed since the flood and NOTHING is growing in the abandoned city, it looks like it had been through a nuclear fallout. So I found a little twist for that building to be retaken by nature while everything else wasn't :p

Beautiful article. Losing their history must have been such a terrible blow, but I love that they have been givne new life beneath the waves. I would love to go exploring the building!

Thank you very much Brinsmead! Even after taking the hit, they can now write a new, cool piece of history from it :)