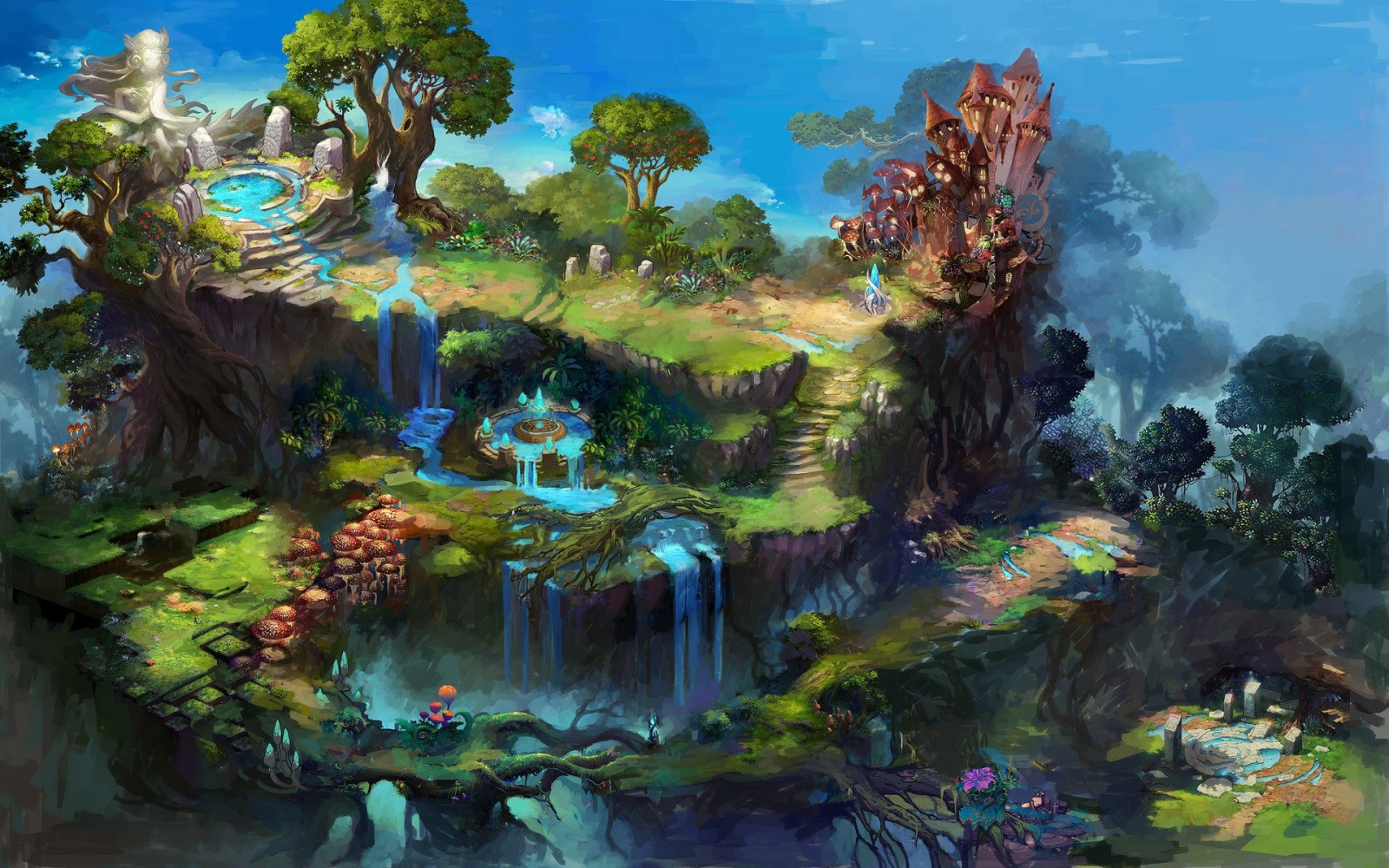 Masqued workers till the fields as knights emerge from the castle, the way they do every year. Their armors gleam in the sun and banners flutter in the wind as they re-enact legends of old, over and over again. The story is always the same and theirs will be a glorious last stand. But this time, something is.. Different. A figure emerges from the road, a woman who wears no masque, bound by no tale. The knights halt, unsure of their path for the first time in decades- centuries? - before she speaks: this time, the tale will end differently.

Quentriandal is a fantasy world that explores themes of narrative, story and archetypes. Set inside of the dream-world conjured by the distant creator-god, Quentriandal is a world were tale and narrative are laws of nature. It is a world of myth and legend, of heroes and villains, of stories formed and told. While the world may be a dream, the stories of those who Awaken inside it are real.

Chandra spoke with the king. Unlike him, with his gilded masque that marked him as still in slumber, she had a choice. Every year, this war saw the land set ablaze and every year, tales of misery and starvation played to their tragic conclusion.   Not this year.

Quentriandal function on assumption and story as much as fact; crops grow when planted and tended, the sun moves across the sky and fires burn because that is what these things are supposed to do. There is consistency to the way the world works: never will fire suddenly give frostbite, for instance. This consensus on the way the things are is enforced by the people who live in the world. At the same time, this is what makes it possible for magic to work and wonder to manifest in the world, while societies remain largely unchanged.   Beasts both terrible and wonderful roam the world, hunting each other or mankind. The land tell stories of its own, of hardship and beauty, of pollution and recovery. In a way, the world is a living thing with each breath and heartbeat reverberating through the tales told.   Sometimes, the story does change (and often, the Awakened are to blame) and the world changes with it. Nations still war, spouses still argue and plagues still claim the life of young and old.

While they wear the masque, people in Quentriandal have no way of changing their world or themselves. They are bound by their role and archetype, doomed to play their part until it concludes - or they are forgotten. The Awakened shatter their mask, by design or circumstance, and break these chains.

Are they real people?   "Drones" who still wear their masques still feel pain, still bleed when struck and cry when caught in despair. The masques can be damnably expressive and it is only the most heartless of the Awakened that see them as anything but individuals. Most see them as people. Some, as potential; of souls waiting and wanting to be free of their masques, too.

While no longer subject to the whim of the dream they live in, no longer at risk of disappearing as an errant thought, they are still bound by the consensus reality. They grow hungry and require food, thirsty and even sick when infected by a story of disease, and gravity still grounds them. The Awakened, however, can stretch these rules with Magic.

In the end, it is the interaction between the Awakened and the world that causes the most disruption to the way things are. Intent and the will to see things made different are powers more potent than any sword of spell. Battles are fought, wagers won and lost.

The other side lined up as they always had. The outnumbered knights would thunder across the battlefield that separated them and crash into the wall of shields, before being surrounded and cut apart. Its protectors slain, the quaint villages beyond the battle would burn and its citizens slain or chained, like it had always been.   But this time proved different. Never before had an arrow ever seen protruding from the eye of the enemy king and the army of masqued soldiers all stared in mute horror as he crumbled from his saddle. Chandra notched another arrow and changed the course of history, one singing shot from her bow at a time.

The masque-wearing inhabitants of Quentriandal, each bound by the dream to their role and task.. Unless they break free.

The Awakened are those who shed their masques and become free. Beyond the power of any coin, blade or magic spell, they possess the power to change the world.

Narratives are metaphysical traits attached to things, people, places or events that define and reinforce their place in the Dreaming-World.

Arete is the first circle of magic - the art of excellence and doing the impossible.

Quentriandal is a dreaming-world, spawned by the fitful slumber of an unknowable creator-god. It is a world where story carries the same weight as gravity, if not more.   The Masque is the mark of the dream, a mask that covers the face of animals and humans alike. Each one is born into the world with the masque fused to their face and each masque tells of the story and role of the person wearing it. Masques are not immutable; as a youth changes to an old man, so too does his story and masque.   The Awakened are those who no longer wear those. Through unexpected circumstance, the Awakened have cast of their mask or seen it crumble. Theirs is a power most unique; the power to change the story and tell their own tales. Awakened can disrupt and change the world otherwise fettered by narrative conventions.   Nightmares plague the dreaming-world, twisted fears and corrupting all they touch into a bleak, dreadful shadow of itself. The world is a beautiful and vibrant place, but Nightmares change it all to existential dread. They are the dark side of the dream, spawned by the Dreamer and Awakened alike.

Quentriandal is a world of adventure and of exciting tales. Quick-witted courtiers clash in courts just as surely as warriors do on the fields of battle. Agile thieves bound across rooftops and crash through windows to escape determined pursuit while determined Awakened seek their destiny and fortune. Hunger, greed, mercy or a sense of adventure- any number of motivations drive the Awakened to explore and see what lies out in the world.

From the soaring cloud-whales to spicy delicious Fire Melons that grow in sand, Quentriandal is a world of wonder. Monsters both great and terrible prowl majestic vistas and perch on mountains that spear the clouds. The deepest ravines lead to unknown darkness and there are still wilderness that have never seen the touch of humanity. Vibrant and beautiful, dark and terrible, bloody and victorious - Quentriandal is never dull or mundane.

While the Dreaming-World provides power to those who act out its stories, the Awakened make their own way. Magic in Quentriandal is based on effort and ability, grounded in action. The rousing speech of a orator that drafts an army to his side or the swing of an axe that breaks a boulder in twain are things made real by Magic. Calling divine smiting from the skies or summoning beasts from the ether are not. Only actions someone can take can be made part of awakened Magic.     Read about Arete - the magic of Excellence
To Rewrite

Out of curiosity. Have you ever seen mirrormask. Love the article and the masque idea fits so well and draws intrigue. I haven't read about the masque yet but will very soon. This makes me excited about the world. Is their a reason the awoken have to use magic through actions or did o misunderstand?

I'm a big fan of hard magic systems. So I try to approach my magic in a way that has an internal consistency to them, so that a person can reasonably deduce why they can do A, B and C, but not D. I approach magic as systems, rather than individual spells. :)   So "action" is just the engine that drives the magic system, one of the components. You can't wave your hands and fireballs fly out, but you *can* shot an arrow straight across the mile and hit someone in the eye. That's one form of magic.

Ohhh ok, see that makes sense. I tend to prefer hard magic systems, one rig setting our group made actually requires you to to find and harvest fire before u can cast a fireball, so the characters would often keep weird little trinkets to help with that resource management like lighters. Hard magic systems have alot of potential ideas and really explain the inner workings of magic. Love itt

I know you said you were going to go with a more happy world. But I didn't REALLY believe you. The name seems significant, does it stand for something?   Does this take place in people's dreams or an actual dream dimension? I"m very curious where you plan to go with this world. It almost sounds like they found power in the dreamscape.

SURPRISE! :D   No, Quentriandal was just a name I came up when I was about sixteen. I like it, so I kept it. :D   I'll return to the text to clarify this part, but this takes places in an actual dreamscape dimension. A creator-god is dreaming it, all of it, and when you get down to it, the people in the world are figments of her imagination.   The Awakened (I might pick a different name) are figments who have become people and individuals, with independence and sentience - no longer bound by what the dream might have had in store for them. :)

This is very interesting! If someone is killed there, do they die both in the dream and outside of the dreamworld? Is there anything else but a dreamworld? Nice article!

As far as the people in the dream are concerned, there are no world beyond the one they live in. :D Dun dun dunnnn!

Nightmares can be hard. But can you die during nightmares? Or do you just wake up? Nonetheless I love the idea of a dreaming world. <3   Big love for you, sunshine!

Awh! <3   The entire world is the dream of a creator-deity: the people in it are figments of that dream. Some just manage to gain a spark of independence and sentience. I'll revise the text, see if I can make that clear. :) Thanks for visiting my new world!

Gorgeous cover art! I spent a good minute looking at it before reading your article. :)   "It is a world where story carries the same weight as gravity, if not more. " I love comparisons like this.   Overall, I love the idea of this world! My biggest question is this: What about when the dreamers aren't dreaming? Is there another existence? How do events in a dream world influence a hypothetical real world?

And since that seems to be the question of the day, I'd also like to know about the circumstances wherein a dreamer can awaken.

The entire world is one dream, by the creator-deity. If she wakes up, well... There'll be another article about the Unformed, creatures who survived the end of the dream to creep into the next by hiding in oblivion. Stay tuned. :D

I really love the whole premise, and your writing style makes it come alive as well!

Thank you! :D I'm glad to hear that!   I expanded on much of the metaphysics premise when it comes to people, so if you enjoyed it, check those out too! :)   There's one for Sleepers, Awakened, Fading and Masques. Those really dig more into the way the setting works for people