The gentleman in the chair was clearly dead, obvious from the way his eyes were wide open, looking at a ghost long gone. The only clue as to what had happened could be seen on the wall behind him, a giant circle of symbols drawn in chalk, the symbols matching the ones found in the rooms of the other 9 dead congressmen.

The Ring of Death is an assassins guild, it is however not an organization out in public with what they do. Their assassination are very easy to recognize. They leave a mark near the body, drawn in white or black chalk. No one knows who is in the guild, how it's run or how targets are picked except for the members of the organization.

The Ring of Death has a leader often refered to as the Assassin King or the King of the Assassins. He's also known by the name Scar as he has a very distinctive one running from his temple to his collar bone. He is a mysterious figure only seen directly by the most trusted members. Under the Assassin King there are the Generals who are also his most trusted advisors. Under these members there are the Scouters (also known as mission leaders). Then there are the leg-assassins or the legworkers. Lastly, there's the messengers.

Roles of the different categories:

Assassin King: He is the one who is the head of the entire organization, he choses which offers to take and who to kill. He is only ever in direct contact with his generals to make sure of his safety. The other members know who he is, as he had to be a General earlier.

Generals: They are the ones who make sure that there is a post somewhere in the city with their flag on it, these are the places where the messengers can write down requests and offers from possible customers. When the messengers have the information it's delivered to a safehouse and the Generals personally deliver it to the Assassin King. 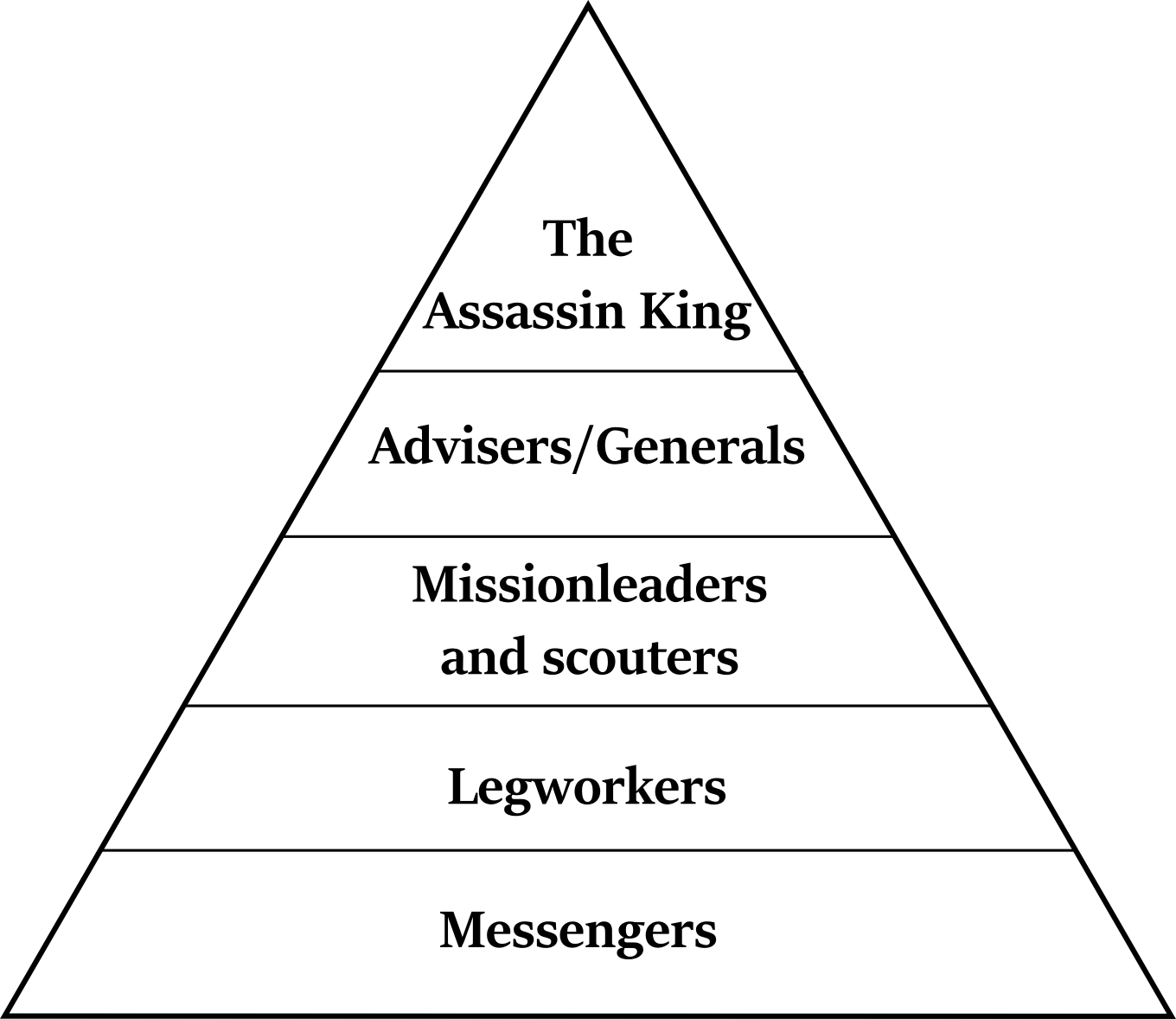 Scouters/Mission Leaders: The Mission Leaders Job is to first scout out the location the assassination is going to happen at, so a propper plan in terms of exeqution and escape can be planned. They then inform the leg-assassins of the detail before the mission and they're the leader on the mission, making sure that everything happens as it is supposed to.

Leg-assassins: The leg-assassins are the ones who actually kill the target as well as make sure the distinctive mark is left on the scene of the crime so that everyone knows who did it.

Messengers: The ones who get the offers from the possible customers, they stand at certain outposts for certain amounts of time before moving to another part of the city.

The Name of the Guild

The origins of the name come from the distinctive mark the guild leaves at every scene of assassination they commit. In the beginning no one knew what to think of it, but it is now so well-known that everyone knows exactly what it means. Even though the organization is hidden in the shadows they are pretty well known. The name was given by the public and has stuck ever since. The guild had no name for themselves so they have resulted to call themselves that as well.

The symbol left by the guild is always the same circle with 12 mysterious sumbols, often drawn in chalk somewhere near the assassinated victim's body. Other than the mystery behind the murders themselves, everyone always ask how they have the time to draw the circles at every singe scene without ever being discovered. 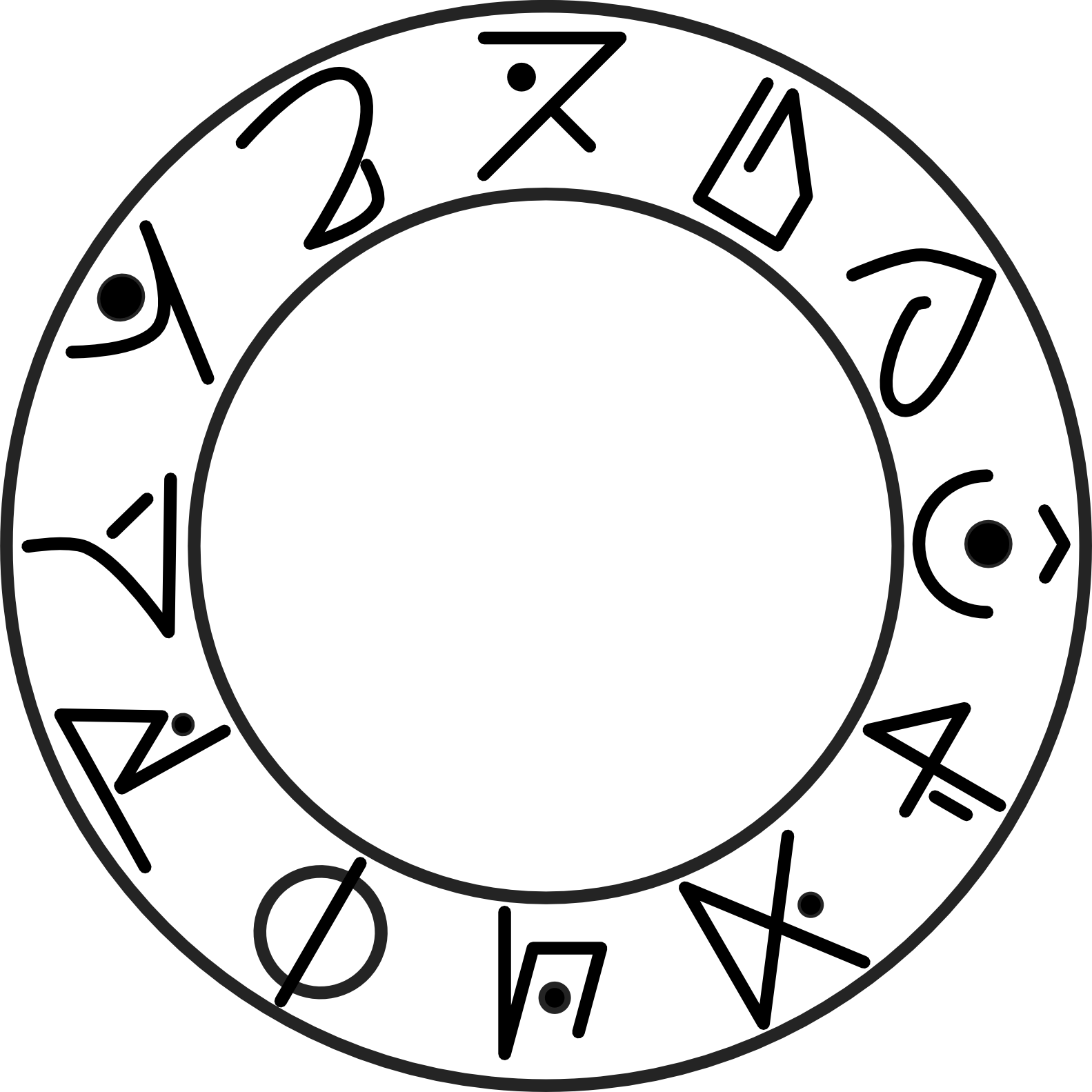 The guild was founded in 675 AK by a man called Aterin Kaledin. The first members were him and his band of thieves, who all worked together to steal enough to make a living. They were all orphans or runaways who had no place to go, and so they became their own family. They started out by robbing wealthy people, and in some places they were forced to kill them when they were close to being discovered. They gained new members by taking young boys with no homes or families of the street. They promised food, work and housing as well as a new security system. They did fulfill all the promises and they also trained the boys to be messengers and later assassins.

Then they heard of a man who wanted to pay a handsome sum for the assassination of his own brother. The guild accepted the offer, but were only ever in contact through messengers, each time a different one. This was so that there was no trail of the actual killers and no one would get in trouble.

To make sure no suspicion fell onto the brother, the group decided that they would leave a symbol that pointed towards something more sinister. They found a random old symbol on a ship that came into the habor and drew that on the floor when they had killed the target.

The first Assassin King was the founder, Aterin Kaledin. Since him there has been 11 other Assassin Kings, the 12 is the current one; he is known only as Scar. Only 2 Assassin Kings have ever been removed by a vote held by the generals. Both chose to stay within the guild and have another position. Another Assassin King was dissapeared, it is thought that he was murdered, but no one ever found any other proof than a pool of blood on the floor in his office. The reason why so few incidents have happened is because everyone care about each other, and they are also given support in different ways.

The members are given things like money, training, housing or free food so that they can get by alright.

When the ring is on the floor, death is at your door.

Distribution of money earned from missions: 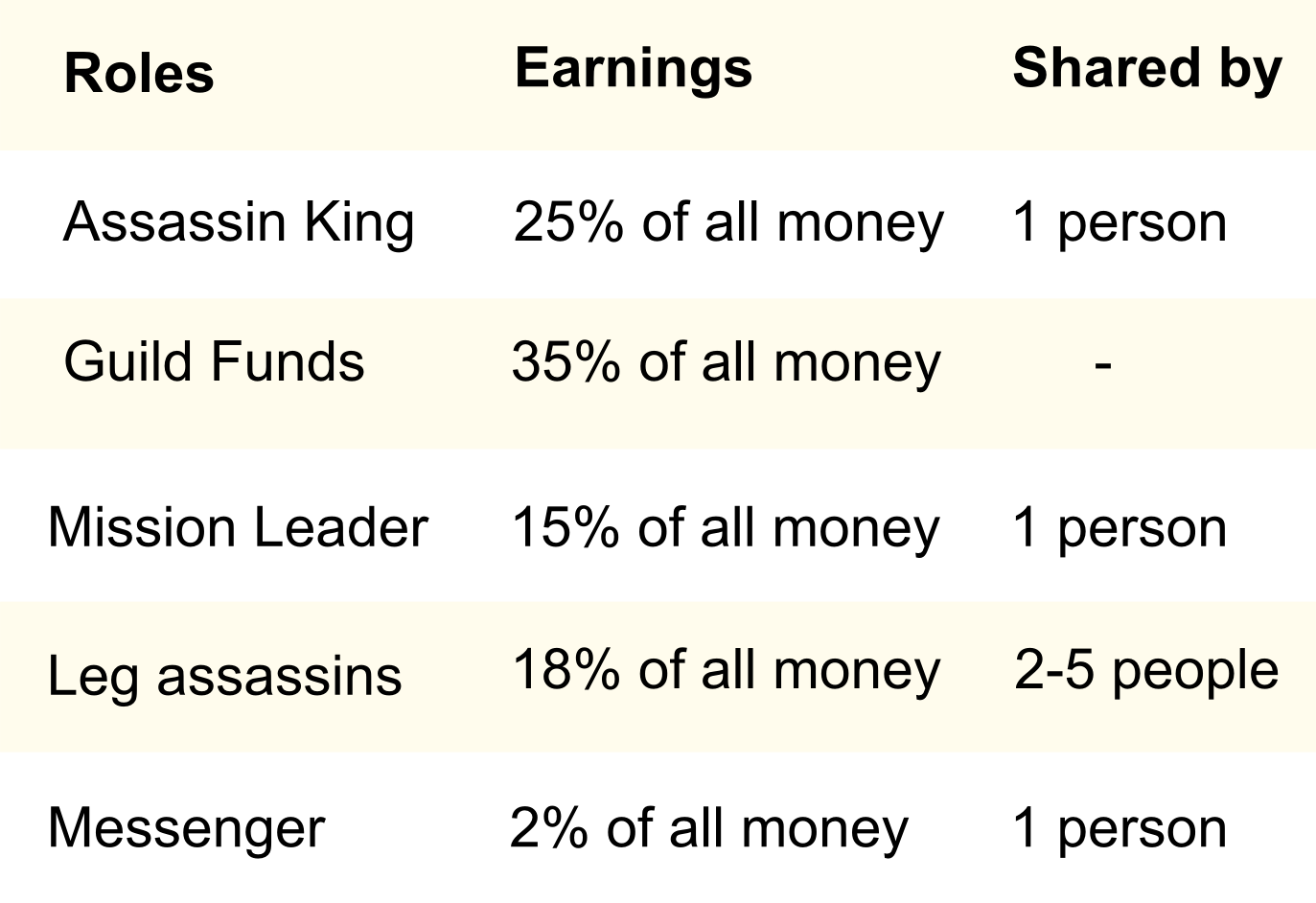 -100
The Ring of death often take out elites within the ranks of Edrea's nobles and court, this has made the kingdom order execution of any members found. The guild is not very fond of the monarchy either, they don't like the hierachy in the Kingdom.

Articles under The Ring of Death

Leader of the Ring of Death.

Absolutely! It's well deserved- and I stole your hierarchy triangle for my own organization ;)

I want to say first off I love this article it Very organized and detailed and an overall great read. And I bet some in my world would love to hire this guild for their own purposes   I also want to say the Enchanters want to feature this article in the future ( like I said its a great article ). is it possible to choose a bigger cover image for it ?. Thank you!

Thank you so much! I have put some effort into this so it means a lot! and of course I'll find a bigger cover image. I have one ready so I hope it's okay :)

Holy freak ! What a rich and perfectly organized article ! I didn't especially watched all the articles featured each week, but if all are that well worked, I will definitely get a deeper look !   Still, I love stats in World Building, and you fill me with those rich schemes and amounts :p   (If it is not too intrusive, is it possible to know the CSS or BB Code you used to do your tables ? :3)

Thank you so much for the comment! I usually just use a generator like: https://www.teamopolis.com/tools/bbcode-table-generator.aspx but the ones with images in them are actually vector images I made with Inkscape, because the image ruined the setup of the tables and my knowledge of code is not very good...

Very interesting! I like the article and there's plenty of detail! I think the first sentence under hierarchy is a run-on sentence, though. Good work!

Thank you for the comment! I can totally see how that sentence was a bit long, I've tried to fix it :)

What a wonderful article! Your formatting makes this page wonderful to look at and this is definitely being added to my read later list for inspiration! The quote and their motto drew me in for sure. : D Wonderful job at painting a vivid image of a organization!

I love the death is at your door comment. It kinda has a nursery rhyme feel that really enhances the guild as does the fact that the symbol was just some random thing they found and drew on the floor. Is there something more to it or was it really just that random?

It was based on an old "death" spell, but it doesn't have any effect except being a signature of sorts :D Thank you for the comment and the like! It means a lot ^-^

Okay holy moly. I keep thinking that the last article I read of yours was the best and I keep being proven wrong every single time. THIS IS NOT ONLY A MASTERPIECE, THIS IS A PRODIGICAL REVOLUTIONARY MASTERPIECE. No I mean seriously, The way this article is organised and formatted makes me jealous. It’s seriously amazing! The way you detail the funds of the organisation, the numbers and the hierarchy alongside the banners and symbols just makes this beautiful to read. Oh and did I mention how badass the name sounds? congratulations and keep being awesome!( I ran out of compliments to give you at last XD)