Rikica'asnet isn't necessarily the most popular boy in the block, even if among the drow of Silver Shore Island he is from the powerful House of Spiderbane. For those unfamiliar, he can feel cold, distant, arrogant, and aggressive, and his fascination with arachnids isn't something looked fondly in post-Llothian society. This fascination with the creepy crawlers his family breeds for the finest Spider Silks of the island has earned him the nickname "Drider" among his peers.

Yet those who dare to look more closely at this secretive wizard find something inquisitive and even endearing from the grumpy book-worm... It is easy to dismiss such ill-mannered boy as simply a talented wizard, reasonable guard, and little else, but this little "Drider" has quite a bit in his sleeve.

In the game, Rikica has become a love interest of the player character May'chalithra Palefury, and also caught the interest of Izil'daerryn Frozenheart, who is interest to see if he can use Rikica's ambitions to his advantage. Rikica works in Yanta Menothar like Valdor Bloodworth, but they know one another only by appearance.

Rikica is very lean and is slightly taller than an average drow male. He has long fingers and graceful build, making him pretty as far as elven beauty ideals are concerned.

Rikica keeps his hair uncharacteristically short for a man of his status, front hair having a bit more length than the hair in the back of his head. This is most likely done to avoid harshest comments and make it look "stylish", though the decision is mostly done out of practicality.

His skin is dark grey, and his eyes are golden yellow with a sharp gaze. He also boasts particularly long ears and sharp yaw.

Due to his graceful and pretty build, his mother likes to display the family silks on him, both to boast about her son as well as to show off the wears and get more business involving their Spider Silk trade. Rikica doesn't seem too bothered by this but tends to wear very different get-up when choosing clothes to himself. 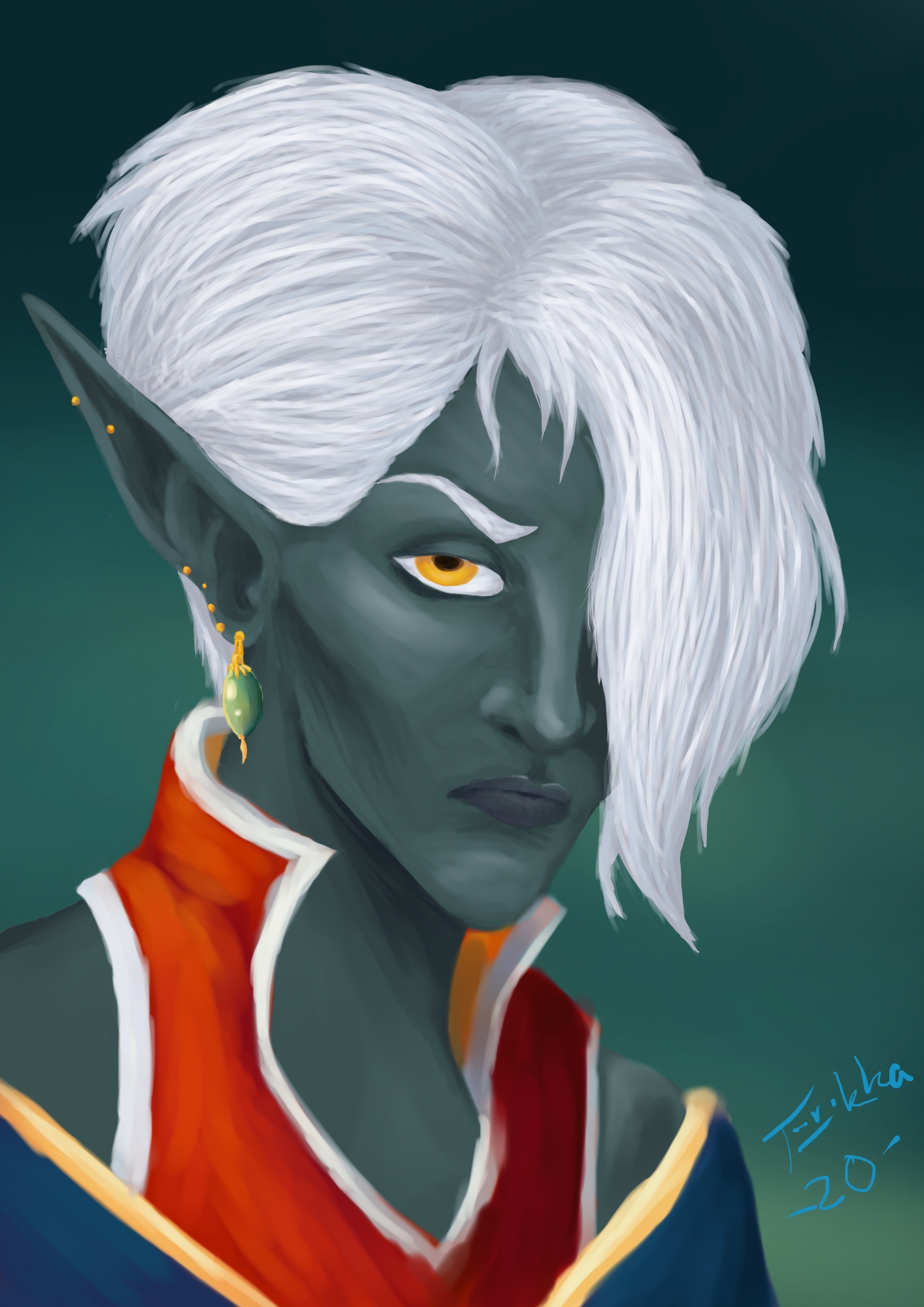 Besides being very graceful and having a very identifiable frown, Riki has recently received some nasty injuries from a roper attack. He has some scars on his waist, and one looking like a mark of whiplash on his right shoulder.

Rikica'asnet Spiderbane was born 12th of Seper, 3909. He is 3rd child and currently only son of Shrikacha Spiderbane. His conception is credited to the house patron, Tarinfein Spiderbane, who likely is his biological father. Rikica's past has been quite mixed, while he has simultaneously managed to gather himself knowledge and formidable skills, but not so much favor as a man of his status would have been expected.

Early Childhood
From as early as anyone can remember, Rikica'asnet was reserved, individual. While he was sweet and obedient to his mother, Rikica has always been prone to anxiety and thus, socializing with non-family members was troublesome right from the get go.

Out of his own valition, Rikica has also learned from the family's workers, training, reading and working with the family's spider farms, in order to produce beast quality Spider Silk.

After unfortunate incident with his sisters, Rikica was sent to train in Thalack Nost in Netehdrez and join the Yanta Menothar, in 4020. Rikica did not do this gladly, but tried his best, managing to complete his training in mere 25 years. He is often considered as a prodigy.

During his years Rikica has served his family in several tasks. He has done bookkeeping and breeding programs for the silk spider farms and participated in magic research with his sisters. Most notably, he has served his mother as her assistant during meetings of Arcane Council of Zaetron Derraz and ran on her errands.   After being sent to Netehdrez for training and joining ranks of Yanta Menothar, Rikica has been working in the street patrols, offering his skills as a mage to the usage of the guard.

The defensive attitude and passive-aggressive behavior indicate that Rikica has his share of mental blocks. He seems slow to trust and speaks more in stares and glares than with words and can appear needlessly provocative in one moment and fade to the background in the next.

Riki can be at first glance hard to approach and looks very much like a loner, but it doesn't need much poking to observe that he is fiercely loyal for those he counts to his in-group, even if he can look crude for them as well. Besides this, he also shows good work ethics and a high dose of ambition. There is certain ruthlessness in his actions that makes matronal society around him very uneasy with him, and he shows worrying amount off independence for a drow male.

For a drow, Rikica might appear surprisingly prudish. He doesn't seem to like to be touched, and while he seems to be comfortable to be wearing most ridiculous and revealing outfits, he doesn't seem to appreciate too hungry stares and shows little overt sexual interest towards anyone.

Most people never realise it, but Rikica's odd habits seem to connect to a feature of him that is easy to ignore: he has several sensory sensitivities that affect how he experiences the world and reacts to it.

Rikica is notoriously bad at responding to being suddenly touched by other people he doesn't feel comfortable with, and he has a low tolerance to crowded places or noise. However, he also seems to enjoy lights and light-reflecting objects (as long as they do not burn his eyes) and things that give him otherwise engaging sensory experiences. Thus it is not unheard of him just ending up getting lost to just touching an item or a starring something visually pleasing for quite some time.

Rikica is also likely to huff and puff, as he gets quickly overwhelmed and as such happens, speaking becomes difficult to him. This can make him snappy and rude sounding, and as he tries to focus he quickly loses track of socially ques while doing so.

Rikica has become very close very fast with May'chalithra Palefury, and two are in a relationship.

He has total on 4 sisters, none he is particularly close to, though he can cope better with some of them than others. Growing up, sensitive and difficult Rikica became his mother's favorite, which has caused jealousy from his sisters.

Rikica has been born and raised as one of Children of The Dancer, yet he hasn't shown signs of being particularly religious.

Rikica loves reading and studying, and often gets caught up by whatever is his current passion project. He is mostly interested in biology and geography but generally sucks information like a sponge. He is very fascinated by insects and arachnids.

While very talented and smart, speaking has been a bit of a problem for Rikica. He often huffs, glares and frowns, and can sound very cocky in his speech, giving compliments somewhat indirectly than straight forward, and sometimes can be a bit of an ass. 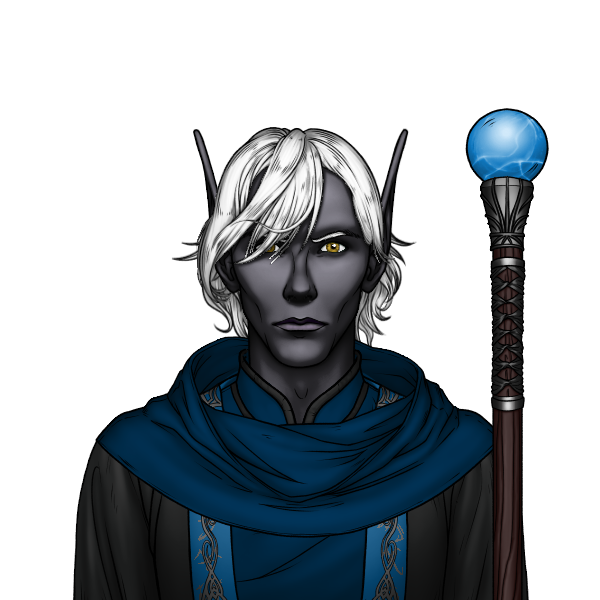 Melyria is a custom roleplay setting made to work with Dungeons & Dragons 5th Edition by Tiirikka and friends.
Melyria draws is inspiration from several Dungeons & Dragons settings and their lore, mainly from Forgotten Realms.
Dungeons & Dragons belong to Wizards of the Coast and I claim no ownership of it.
Melyria and it's quirks belong to me and getting inspired is very much allowed and credits appreciated!
Cover image: Melyria cover, eyes from digital painting "The glare" by Tiirikka
Character Portrait image: Rikica'asnet Spiderbane
This article has no secrets.
Article template
Character
World
Melyria
Category
Drow NPCs in NPCs
Author
Tiirikka
Publication Date
16 Mar, 2020
Creation Date
15 May, 2019
Last Update Date
11 Mar, 2021
Visibility
Public
Views
177
Favorites
Comments
0
Tags
alive-male-drow-npc spiderbane-bloodline