May'chalithra is the youngest daughter in the current main branch of the Palefury family. She is ambitious and smart young lady, who dreams of greatness - maybe she will be Matron herself one day!

She is still a growing young female, and is probably going to be around average height, still having that lithe teenager build for now. She is very nimble and loves to do acrobatics stunts and dance.

Her skin is dark, almost black, and her eyes lovely golden yellow. Her hair is white as usually is the case with the drow.

She has sharp, but pretty features, with a still few traces of childhood softness lingering on her skin.

She is a dragonic sorcerer and has golden yellow scales. They fill her back, staritng from the hairline on the back of her head, running down the nape of her neck and following the spine. The scales start small and slowly grow larger starting from between her scapulae. The last big one rested on her lower back, just above the tail bone. Smaller scales look like they would be sprouting from the bigger ones and spreading in oddly symmetrical patterns on her sides and more recently also on her shoulders.

She is a dragonic sorcerer plus a bard, so she has quite a sly arsenal of everything anyone would want. Mostly for sly undercover stuff, apart from few other nasty spells.

She loves dresses, and more skin they show, the better. Although, she is at home in more conservative, practical clothing, too.

May'chalithra was born 16 of Aug 3978 as the youngest of the 7 siblings, being 5th daughter of the family.   It was very much hoped that she would inherit the dragonic ancestry of either of her families (most likely from the Palefury side, because of how drow genetics work), but as a child she didn't show any signs of those. She was named May'chalithra, 'ithra' meaning dragon. It was dropped from her name early on, when she didn't deliver the hopes of her mother.

Later, though, when her mother had already been dead for several decades, rough patches of skin started to form on her back. She was concerned, but so embarassed of her 'eczema' that she never told anyone. She was flabbergasted when she finally realized that it wasn't just irritation of skin or a rash; scales had started to grow on her skin. She was delighted, but also unsure of what to do. Her sister could have taken it as a threat, because she was the only one in the family with scales. Thus, she fled to see Grandma Voidthrone about the situation and how to confront and reveal her big secret to the Palefury family.

After that incident had been taken care of, she quickly found herself confronted by another problem, an 'accident' which could, and most likely would, change her life for good...

Her father taught her the skills needed for a proper entertainer; sparring with boys and singing. She's especially good at dancing with the scarves.

Officially she works for her family, but she's wuite an enterpreneur and has started some side businesses too, like drawing indecent pin-up-ish pictures and then selling them. She's also secretly an editor of her brother's book, and has some information gathering jobs here and there for certain individuals.

The loss of her first crush was a big problem to her.

She is smart and witty, likes to tease (boys) and prance around like she would own the place. She really takes the stage.

She is a merchant by nature. She aims to make deals that are good for both parties.

She loves long hot baths and likes to groom herself. Make-up and perfymes are also her thing, but she's not afraid to get dirty in the work.

She's not very religious, but does respect the gods.

She is extremely social and like a fish in the water in social situations. She loves to chatter, but also sing and entertain in general.

Shrimolna is May's temperamental riding lizard. She likes to dance, sing and play instruments on her leisure time, but also does draw indecent pictures of people... sometimes imaginary, sometimes not. One could have worse hobbies than drawing pornography, right...?

She is very good in persuasion and master wordsmith. When she speaks with boys, her voice often adapts an odd accent [The player somehow switches to mild Irish accent in such situations.]

She is quite well-off, especially now that she's a manager of the family business' branch in other city. 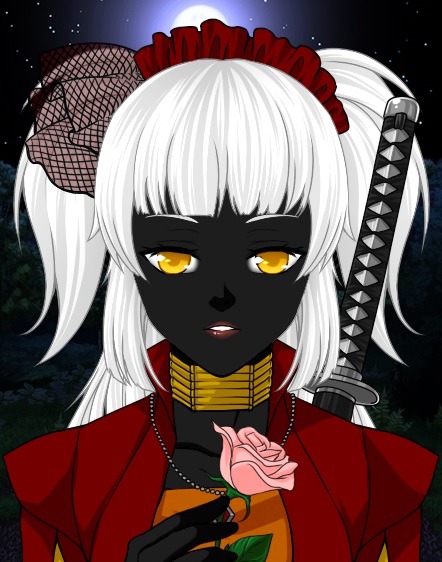 Character Location
Zaetron Derraz
View Character Profile
Professions
Year of Birth
3977 AoS 70 Years old
Birthplace
Zaetron Derraz
Parents
Zar'qualnarra Palefury
Beldaragh Voidthrone
Spouses
Siblings
Ssapriina Palefury (Older sister)
Zesbryn Palefury (Older Sister)
Rauv'thara Palefury (Older Sister)
Adinas Palefury (Older brother)
Minwae Palefury (Older Sister)
Izzton Palefury (Older brother)
Children
Current Residence
Treiw'delmah, Zaetron Derraz
Presented Sex
Female
Sexuality
She is extremely active on that area. She likes to flirt and likes to sleep around, which is not necessarily a bad thing in the Drow Society. She is quite a teenager, though, and has remembered to drink her no-baby-juice, up until quite recently...
Gender Identity
She is a woman in all the sense of the word, but she doesn't endorse common rules and taboos about how the men should behave around women when she is alone with the men and gives them more freedom. But when there are other women present, she expects the men to behave as they should.
Eyes
Golden Yellow
Hair
White
Skin Tone/Pigmentation
Black
Aligned Organization
Palefury
Other Affiliations
Full Playlist
Youtube
Player Characters

Melyria is a custom roleplay setting made to work with Dungeons & Dragons 5th Edition by Tiirikka and friends.
Melyria draws is inspiration from several Dungeons & Dragons settings and their lore, mainly from Forgotten Realms.
Dungeons & Dragons belong to Wizards of the Coast and I claim no ownership of it.
Melyria and it's quirks belong to me and getting inspired is very much allowed and credits appreciated!
Cover image: Melyria cover, eyes from digital painting "The glare" by Tiirikka
Article template
Character
World
Melyria
Category
Player Characters in Characters
Author
DarkTsuyoi
Publication Date
9 Apr, 2020
Creation Date
14 May, 2019
Last Update Date
11 Mar, 2021
Visibility
Public
Views
388
Favorites
Comments
0
Work In Progress
Tags
palefury-bloodline alive-female-drow-pc