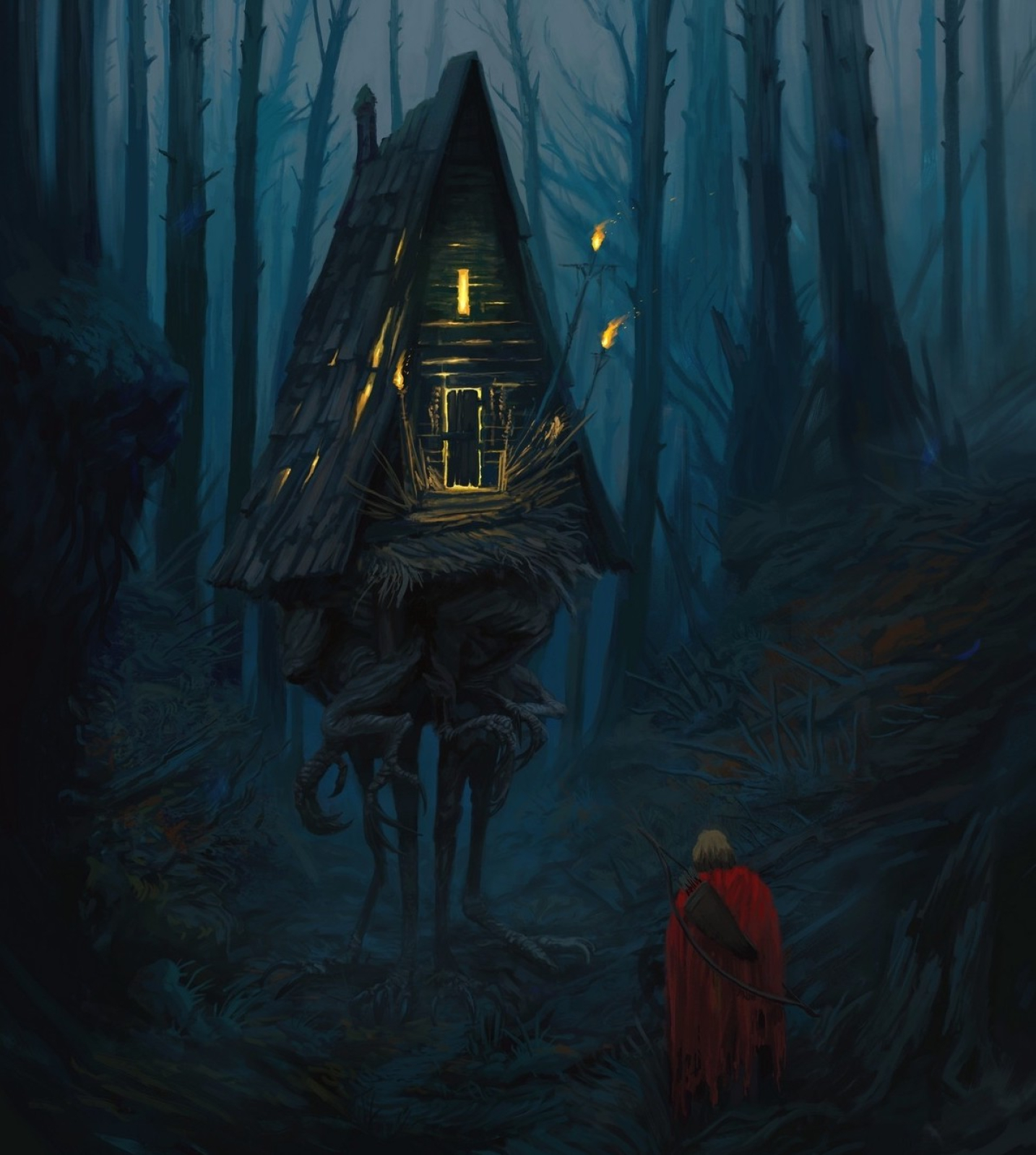 Chapter 26 - To Grandmother's House We Go

Plamen and Khurshid begin making their circle around the fence, but manage to provoke the skulls again. This time, it is Khurshid who is unlucky, and gets badly burned. Plamen pulls him into the bushes and cures him, but in the commotion, they decide to take the opportunity to abscond, and to lead the knights away. Plamen obscures himself and his companion, and uses his voice to provoke the skulls, and to lure some of the knights away from the fence, and deeper into the forest. Andreas, Hubertus, and Franz follow.   In the meantime, Chonkorchuk, Druvvaldis, Raskel and Katarina sneak up, and then launch an assault on knights' camp, where Father Sigismund is currently being guarded by Dietlieb and Hans. Chonkorchuk, using a newfound power, plunges the camp in darkness, through which he can nevertheless see. Infernal arms reach out from the darkness, and assault Father Sigismund and the remaining knights. Druvvaldis and his new dog, and Raskel and his new raven, are poised around the perimeter of the darkness. Chonkorchuk wades in, and begins blasting, while Druvvaldis delivers Dietlieb a blast of cold. Sigismund attempts to respond by silencing the enemy casters, but after figuring out what the matter is, they sidestep it. Vasya fights on the side of the Knights, but as the fight swings against them, he stops helping them. Katarina uses her newfound power to launch lightning from her hand. Sigismund and Dietlieb finally skirt around the darkness, but the Father, Dietlieb and Hans are harried by Chonkorchuk's arcane blasts. Finally, Sigismund is brought down by the dog, which begins to devour it. Dietlieb and Hans, surrounded and outnumbered, are intimidated by the hermit into surrendering. But Andreas rides into camp and lifts the father's body onto the horse, and is able to ride away before anyone can stop him.   The companions search the camp, take their prisoners, and advance to the walled compound. Here they are presented with a dilemma. Chonkorchuk has remembered the flaming skulls and their terrible potency, so the question is, how to get past the wall. There is some discussion about climbing it, or finding the latch that lifts the gate of arm and leg bones. The main group is soon joined by Plamen and Khurshid, who have managed to lose the knights, and, hearing voices, circled around back to the main gate. Khurshid uses his last reserves of energy to once again transform into a falcon. Along with Kutkh, he soars high over the wall, where the skulls' infernal power cannot reach him. Inside, he finds an overgrown yard. A small, wooden hut on chicken legs stands in the middle. It is guarded by a huge wolf on a chain, and a lynx-like cat, that circles it. There appear to be no other obvious ways in. The birds return to relay what they learned to the rest of the group.   Discussions about what to do continue for several hours. No one wants to risk provoking the skulls, and there is some fear that the remaining knights will return. Indeed, soon, the sound of hoofbeats is heard. The group adopts a defensive position, but a sole rider, dressed in black, and on a black horse, rides out of the woods. Ignoring the party and the skulls both, he makes straight for the gate, and somehow sinks down below it. Chonkorchuk says that the three riders are Baba Yaga's servants, and remain with her while the other riders are abroad.   Soon after darkness falls, and the skulls begin to glow with their terrible light, there is a crack of lightning and a peal of thunder, and a wooden mortar comes flying up to the gate. It alights by the gate, and the crone herself steps out. She calls out to the group, gently chiding them for taking so long to get there. Raising her arms, she causes the gate to open, and invites all assembled inside. Chonkorchuk tells his mistress about the knights, who are nearby, somewhere, but she dismisses his concerns, saying that the empty poles will soon be crowned by their skulls. She leads the party past her guardian oak, dog, and cat, who act compliant and do not threaten them in any way. The she invites them inside the hut.   As they settle, Khurshid withdraws a scroll he has been hiding in his vestments, and presents it to the crone. It is a scroll he purchased at a market in his distant land, and discovered that it related of a fire demon of some sort, and instructed in ways of his summoning. Baba Yaga examins the scroll, and says that it tells of an entity named Koshchei the Deathless. "You have brought an item of great evil here," she tells the young man as she closes the door to her hut.