Koshchei's origins are uncertain - he may have been a god, a steppe-dwelling nomad, or a prisoner at various times. Now, he is the world's most powerful sorcerer, who cannot be killed. His Death is reputedly hidden away on the Island of Buyan, or another Realm, and without finding it and learning how to release it, Koshchei cannot be destroyed.   Reports as to his appearance differ - not surprisingly, as most who meet him do not live to tell the tale. Some say he is a gaunt and grizzled old man with a beard, others claim that he is hairless and skeletal. He usually wears some sort of crown - perhaps a gold tiara, perhaps a spiked iron crown. He wields a huge sword - some say, the famed Sword of Agrik, which can slash an opponent of its own accord. Koshchei can reputedly fly under his own power, but he also rides a nightmarish black horse that can cover huge distances in the blink of an eye. According to some sages, the horse originally belonged to Baba Yaga.   It is widely speculated that Koshchei was the real power behind the Kochmak invasion. Why he prompted the Kokchon to conquer Nor' is unclear, but many submit that Koshchei has great treasures hidden underground in Noriki lands, and he guards that treasure jealously. He seems to have an interest in keeping the Noriki divided, and sends Kochmak forces to cut any prince becoming to powerful down to size. Koshchei also requires the Grand Prince, whoever he or she might be, to deliver maidens to him as part of the annual tribute. The purpose of this is also hidden.   Although he has been called the Dread Lord, or even Tsar of the World ever since the invasion, Koshchei does not have a court where he receives supplicants. A variety of fortresses located in the southern or eastern mountain ranges have been reported, and all are quite unapproachable by normal means. The fortresses are staffed by Koshchei's servitors - possibly undead - who are unquestionably loyal to him. There is also some speculation that he controls the old ruined graveyard cities of the Fogarma, but there are no reliable reports of anyone having visited these sites in centuries. With all these dispersed fortresses and treasure troves, and so many people and other servitors under his command, it's obvious that the Dread Lord is still planning something. The plagues that have ravaged the country in recent years are supposedly his doing in preparation for something big.   Many stories are told of young heroes who manage to find Koshchei's Death, and defeat him. The Dread Lord does not take kindly to these, and people who tell them tend to disappear. He has infrequently spared those acting against him if they have done him a service in the past, but no one gets third chances with Koshchei.   Koshchei has many and varied relationships with other powers and deities. There is speculation that he is identical with, or the younger brother of, the winter god Karachun. He is also the rival, though perhaps also former lover, of Baba Yaga. 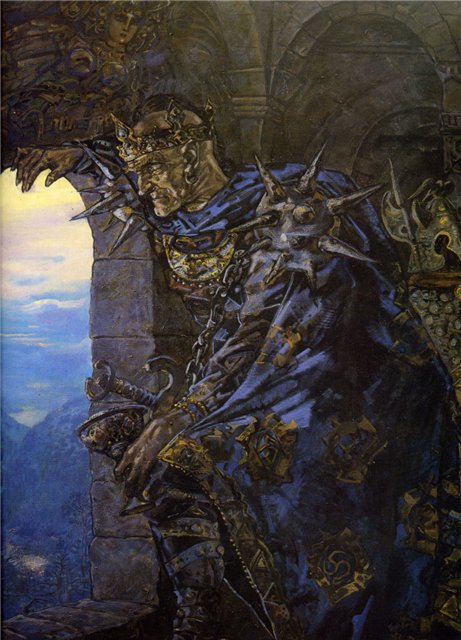