Work in progress
Volk Antonovich Borisov is a support character from Seeking for the Lost Northern Stars who first appeared in chapter five. He is one of the Royal Guards who works at the Royal Palace, where his main duties are guarding the doors of the Ball Room, the Throne Room and the hallaways of the Palace and The North Tower. He currently lives and work in Ulán Shang Kov despite being born in Tula.


Volk was born and grew up in the city of Tula, located in the Tula Oblast. He is the only child of the Antonov family, which was mainly involved in commerce. Despite the commercial tradition of his close family, since an early age he has shown interest in militarly and militarly related stuff such as weapons, uniforms and and the idea of protecting Moskova's population of treaths or fighting for the country .   His family didn't have an actual opinion on him joining the Imperial Army and preferred him to follow the family's bussiness until his 16th birthday, when during the brithday celebration he and his family saw a robber attacking a group of children who were asking for food, trying to take away the bread gotten by the kids. When seeing this event, he faced the robber in order to fight him and protect the children. He ended defeating the criminal, and both him and his family ended deciding that joining the Army wouldn't be only a honoring decision but also it was something he was destinated for.   Following his desires, he took a trip to the capital, Ulán Shang Kov and applied to the Army. He began working as part of the Royal Guards when he was 18, and since he was 21 until he was 25 he was in the City Patrol. He returned back to his job at the Royal Guard because he felt very comfortable with it and met Ugor Yusupov, another guard who got closer to him by the time.   He had enjoyed his job during Grosnik Vasily's reign. However, when Prince Vasily died and his place was ocuppied by Tsar Grosnik Ivarosovic's, everything became darker at the Royal Palace. The new monarch was very violent, and for preventing any kind of punishment against him, he had to obey it without whining, even when he obligated him or other guards to do horrible things. Mikhai Rankash's involvement in the Monarchy and military was something that made things even worse since the Tsarevich tends to mistreat him and the other Guards and servants in several ways.


Volk is motly calm and shows himself as a serious and obeying person most of the time, mostly because of his millitar training and the custons he has to follow during his worktime. However, he likes a lot humorous stuff, children, animals and loves to hang around with Ugor, his closest workmate. His job is one of the things he used to like the most, as having close contact with the Monarch is something he always considered honorable, but since Ivar's goverment begun, that dream turnt into almost a nightmare.   He is strong and brave, but he's also afraid of Mikhai Varizoniev Rankash and Tsar Ivar, since their treatment towards him is far from decent. He dreams of better days coming for him and Moskova in the future and also moving with Ugor Yusupov someday.


He is mostly seen wearing his Royal Guard uniform, which has as main colors orange, yellow and green. The uniform is formed by a long sleeved jacket, a pair of pants and fur boots. It also includes a har made of wool and fur. His most used arsenal is a combat axe. 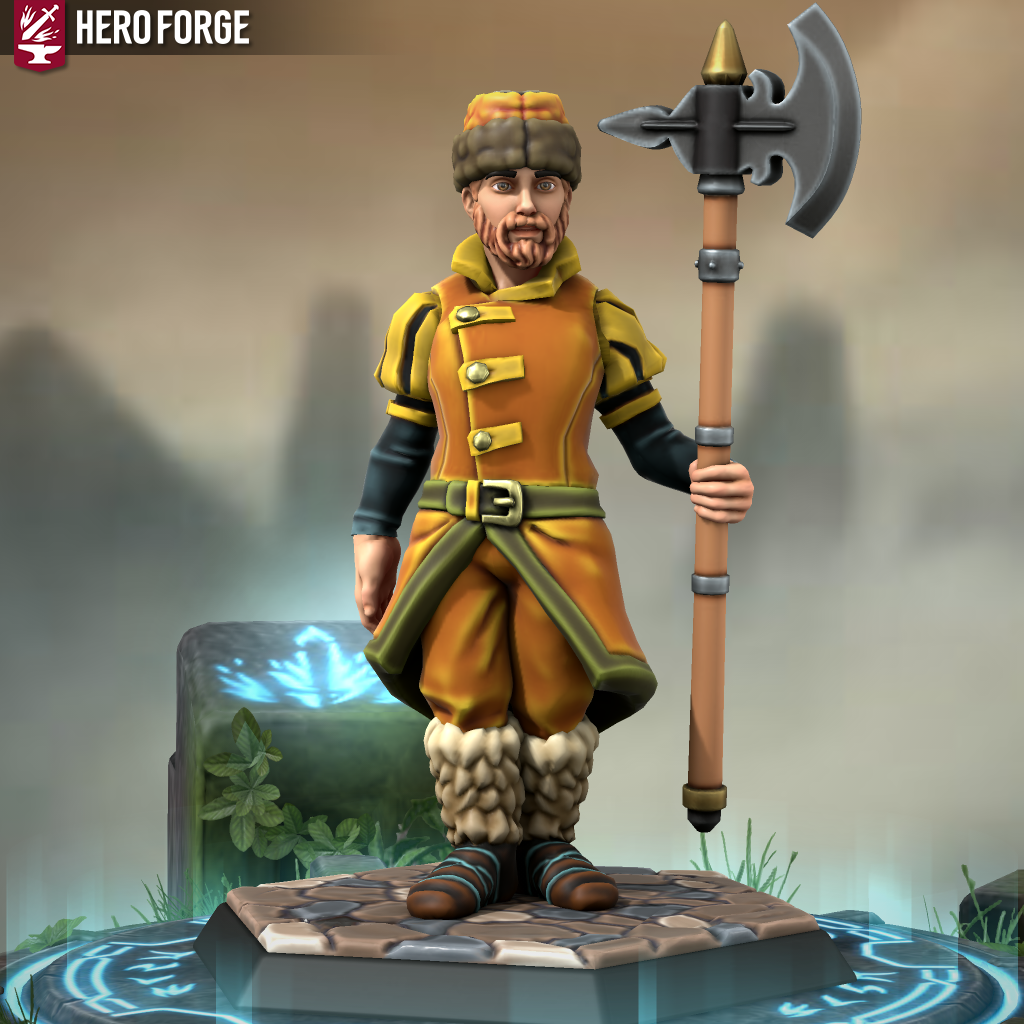