Give a man a coin, and he'll be two steps away from Hell. Sorround him with a crowd of dumber people, and he will be by it's doors. Put a crown over his head, and even the Darkest Demons will eat from his hands.
— Mikhai


Mikhai Varizoniev Rankash, born as Serik Nhurshem Yakivenkov, is one of the main villains of Seeking for the Lost Northern Stars. He's the Tsarevich of Moskova during the novel.


His father was Nhurshim Yákivenkov, a Kozzakhi from the Timur Steppe's clan. He used to be ambitious and ingenious, his greatest dream was becoming the second ruler of the clan, which is chosen by the debate of all adult members and the vote of the older ones. When the second ruler's ready to do it, then turns into the main ruler. But unfortunately his personality made him get in trouble with the rest of the clan's members.   He was proppensed to aggressive or dishonest behaviors for getting stuffs,which goes against the philosophy of the Kozzakhi culture. He used to get angry when someone tried to pointing it out. His unique motivation made him almost the perfect candidate for that position, the older ones liked him,but when he started to show his bad behaviour toward other clans, they started to think that Vladek,who was the other possible candidate,was more appropriate for it.   Finally, the day of the election came, he expected to be the chosen one. But the Elder ones choose Vladek instead. Nhurshim collapsed in anger .Vladek tried to calm him but he denied his help. After knowing the results of the poll he ran away and got into the forest by the steppe and noticed that there were other Kozzakhi clan. During the night he decided setting a fire in the forest. The other clan noticed it was him and asked urgently for talking to the main ruler. This action almost caused a war between two clans, something never seen before among them.This was enough for giving him the worst of the punishments: getting expelled of the clan.


Nhurshim roamed as an outcast after his expelling out of the clan and used to survive by stealing,when he got into Moskova’s capital city, Ulán Shang Kov.There he met a woman who was part of a Shankovian stealer gang. She was known by her gangmates as “she-raven” because she once assaulted a doctor and stole his mask. He joined the gang and both them had a son, named Serik Nhurshem Yakívenkov.
Serik grew up in a violent environment, stealing jewels for his parents. He grew up having a negative image of Kozzakhi people, because his dad (who never forgave the exile) used to tell him that them were savage creatures with no worth,who ruined his life and condemned him for living of waste. Even being a half Kozzakhi himself, did not stop the growing hate inside Serik’s mind, feed by his father’s negativity. Even sometimes he used to feel ashamed of his own origins. Since a very early age, one of his main life goals was taking vengeance of his father.

A life change for Serik


When Serik turned a teen, he used to get involved at gang fights. One of them happened near to the Royal Palace, so Royal guards tried to suffocate it getting no results. After a while of fighting, Ivar himself decided to take action with his soldiers.   They could scare the most members of both gangs and capture them. Serik was one of them,but when Ivar and him stared at each other, they both felt in a very particular way. The Tsar found potential for a killer warrior on the boy after seeing his rude attitude and fightings techniques and he also felt that getting in touch with the Crown would be the best way of getting enough power for his revenge and money. Ivar ended adopting the teen as his apprentice and son-wanna be.   For making sure that his life changed completely,he changed his identity and declared Serik dead, denying all his linking to Kozzakhi culture and instead standing for an open racist attitude towards it.
Mikhai Varizoniev Rankash,as his whole new identity stood,grew up surrounded by luxury without blame and being treated by the emperor as a favorite, receiving his special trainings for war and when he got enough old for it, participating in military campaigns. By the passing of time, a truly fierce beast developed inside Mikhai.

Due his complicated life story, he had developed such a broken personality,characterized by trust issues, insecurity and wishes of revenge but the luxurious raising at the Royal Palace also added to those features some like vanity and ambition for material stuff. He has learned how to hide his weaknesses by the pass of time for apparenting to be a strong and grumpy stone-hearted person. He always tries to get what he wants and doesn’t stop until getting, as he uses flattery and seduction as main strategy for this purpose. He’s the main sidekick of Ivar and always accompanies him on his conquest campaigns and fights.Cause of this,he’s also Ivar confident and sometimes, the only one who knows almost all of his plans.Is treated as an apprentice by Ivar. He considers himself as the only one capable of occupying the Eagle’s Throne after Ivar’s gone so the main reason why he tries to please him is for getting the power. However, besides the desires of becoming Tsar, he actually feels admiration towards Ivar,specially because he taught him most of the things he know about fighting and domination and also rescued him when he was a homeless teen.   His hate towards Kozzakhi people has molded his hunger of power and he also want to do vengeance on Vladek’s clan due the incident of his father.   Mikhai uses sarcasm a lot, has a vulgar treatment towards servants and guards, and got a pretty dark-twisted sense of humor. Also he speaks in a charming way, so is very difficult trying to lie to him or hiding something.


"This world may have failed you
It doesn't give you a reason why
You could have chosen a different path in life"
— Within Temptation, "Angels"

*He’s usually called by his first name (Mikhai) in the novel,but sometimes, his surname comes first.The reason behind this, is that Moskovar’s royalty member are officially called using their surname at first .This means that actually the formal treatment of the Tsar is Grosnyk Ivarosovic.
*The concept of the character’s role was inspired by Red Queen’s sidekick Ilosovic Stayne from Tim Burton’s “Alice in Wonderland”and by Gerda from “Maleficent: Mistress of Evil” mixed with their respective leaders’ personalities.
*He’s considered one of the most handsome members of Moskova’s Royalty and also one of the most attractive inhabitants of Ulán Shang Kov.
*His Kozzakhi heritage is maybe his best kept secret.
*His horse is named Alpha.
*His favorite food is barbecue.
*His favorite weapon is the double edged axe.
*He thinks making Royal Guards act/look stupid is funny.
*No one knows if he’s on a relationship, he seems to be single during the whole novel but possibly he has gotten several girlfriends.

*He has some strange reactions towards death, he usually doesn’t care about it or take it as joke showing his dark humor in awkward situations but sometimes he even enjoys it and gets pleased by other people’s suffering. Even he has showed that someone/something’s else life has the same value as a simple and replaceable object.This could be a sign of his unstable mind.   *His name is a variation of Mikhail, a name that means “Angel Michael” in Russian. In some sense, this meaning could be considered pretty ironic toward his personality, but at the same time it can be pretty accurate If he's considered as a “fallen angel”. 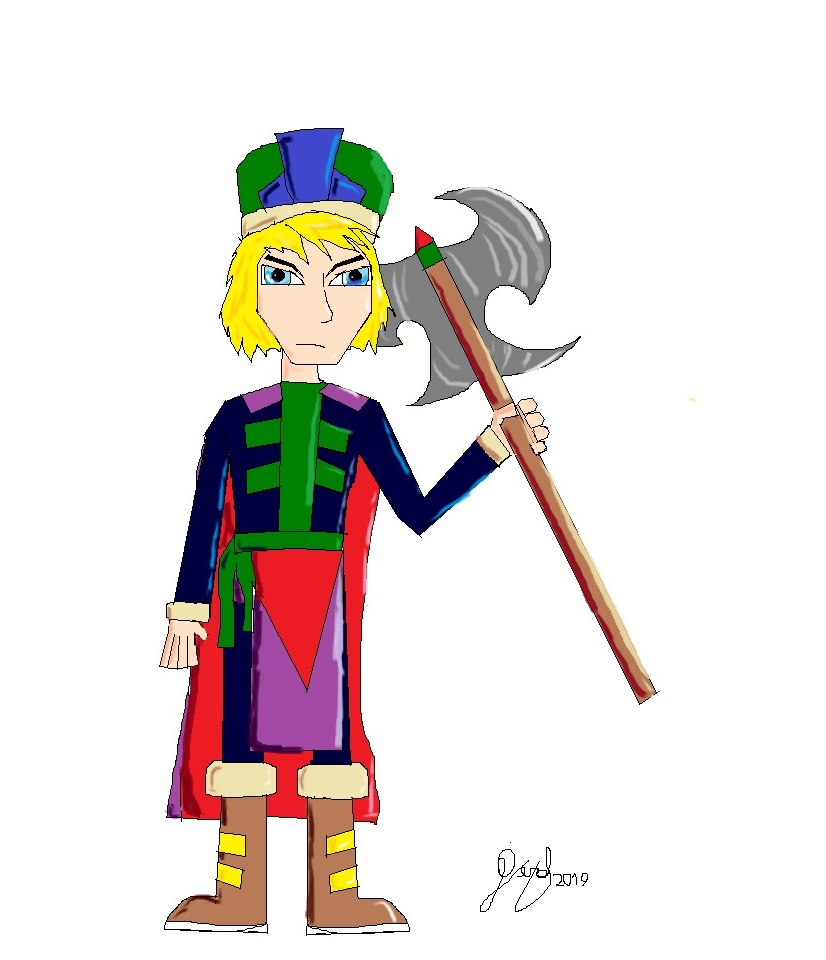 by Gege16 through PicsArt

What an interesting character. He sounds like he is a great antagonist. I don't like him, but I can understand why he is the way he is somewhat. Great article!

Thanks a lot for reading and commenting, i appreciate it a lot! I don't like him either (he's...what can i say...horrible in many senses) xD, but is maybe one of the most complex characters i have in this world :)

I'd enjoy reading about him and hating him for all his evil acts!! Brilliant character!!

Thank you so much! I appreciate you like it! :D Developing him was a fun challenge, is one of my most complex characters by the date. Yes! He's an evil bastard >:(