Ugor Viktorovich Yusupov is a support character from Seeking for the Lost Northern Stars who first appeared in chapter five. Longside Volk Borisov, he is one of the Royal Guards who works at the Royal Palace, where his main duties are guarding the doors of the Ball Room, the Throne Room and the hallaways of the Palace and The North Tower. He is native from Ulán Shang Kov and works there.


Ugor was born in the capital of the Empire, Ulán Shang Kov from a family of carpenters who worked for the Army. Since he was a child, he always liked to bake and to take care of little birds and other animals, so one of his biggest dreams used to be to have a family and a bakery. However, the link his family had to the Imperial Army pressioned him to join said institution.   Despite his pations, his family's expectances of him joining the Army made him to apply at 17. He began to work at the stables of the Cavalry at 18. They expected him to climb to higher positions and become a Saergent someday, however it wasn't actually Ugor's desire to make such military career. When his workmates from the cavalry noticed he was a very good cooker, they talked to their chief in order to hire him for working at the kitchen of the Royal Palace, an idea that Ugor liked.   Yusupov ascended to a position at the Royal Guards and he also kept his job as cooker in the Palace. Working as a guard and a cooker was an idea he liked a lot more than becoming saergeant despite of the expentances of his family. He ended loving his work as a Royal Guard when he met Volk Borisov, who by the pass of the time became a good friend of him and maybe his closest workmate.   His times at work during the reign of Grosnik Vasily were in some sense enjoyable, since the work environment wasn't toxic. However, this situation changed with the death of the Great Prince in 1356 and the following coronation of Grosnik Ivar in 1357. Ivar's inestable and violent behavior turned the Palace into a somber place where even the littles mistake could have bad consequences. But it even became worse when Mikhai appeared in scene and became closer to the Army and The Dark Army because he tended to mistreat him and the other guards and servants. Volk's presence was the only thing that made such nightmare standable for him.   Just like Volk , he met Vladimir Kuznetzov when he was captured, and during the time Vladimir worked as a servant, they used to meet to each other pretty often.


Yusupov Ugor may look as big and fierce (image that's not helped by his work as a Guard), but he's actually a sweetheart who always had a chill personality. He tends to be calm and doesn't get angry too often. Some of his likes are animals, to cook, to bake and children. He's also afraid of cockroaches, Mikhai Rankash and Ivar. Regarding his dreams and desires, some of his wishes are to have his own bakery, to move away with Volk Borisov and habe a family with many pet ducks. Thanks to his training as Royal Guard, he knows how to use weapons for self defense.


He is mostly seen wearing his Royal Guard uniform, which has as main colors orange, yellow and green. The uniform is formed by a long sleeved jacket, a pair of pants and fur boots. It also includes a har made of wool and fur. His most used arsenal is a combat axe. 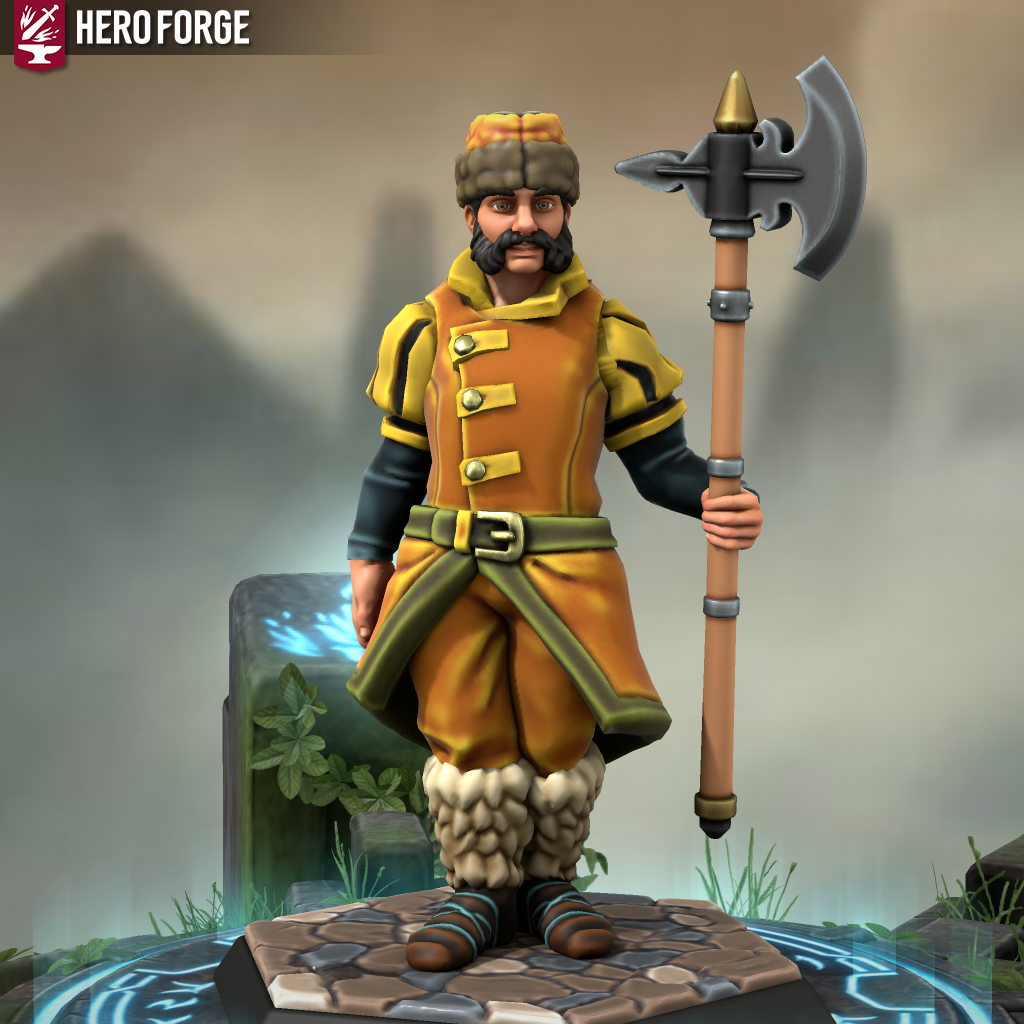 I really enjoyed the section on his dreams for the future!

I'm glad you did :) Thanks a lot for reading and commenting!