Vladimir Dimitriev Kuznetszov is a secondary character from Seeking for the Lost Northern Stars who appeared for the first time in the fourth chapter of the novel.

Early years and before Ivar's reign

Vladimir was born in the spring of the year 1335 in the autonomous city of Nodvragoda as the youngest children of Dimitri Kuznetsov and Tanya Kuznetsova. His father, as his last name states, is from a family of blacksmiths. Vladimir got an older brother named Ilya.   During his youngest years, Vladimir was known among his family thanks to his distinctive personality as he was pretty quiet, kinda shy and a boy of very few words. But after earning his trust, some traits of him like his smartness showed up. He liked a lot to play with Ilya in tricky ways and building unique devices and tools by combining parts of pre existing stuff.   As his parents were friends to Shirkania Yanga, he developed a good relationship towards her too. The witch encouraged him for developing his talent.
He met his girlfriend Tatiana during a summer solstice festival at the city's lake and they got married two years after it. In 1358, Ivarosovic Groznik became the new monarch of Moskova and as he started a brutal expansion of the Principality (after turn into Tsardom), several rumors of a possible reconquest of Nodvragoda did spread. The couple had their first son in 1360 and in 1361 they had a daughter.     His life married with Tatiana and his children was relatively normal until 1362, the year everything became darker for his life. During a blood moon night of 1362 in which the Annual Summer Festival was being celebrated, Ivar and the Dark Army raided the city, creating chaos and horror in all its corners. Many civilians got killed, tortured or captured while the troop burned down most of its buildings. Some others (like his parents and his brother) could escape of the disaster by running away. Unfortunately, he, his wife and children got captured. He had to choose between serving the crown and getting his family executed so he decided to turn into a servant of the palace.

Nodvragoda (Нодврагода) is a city located in the center-north of Moskova. It is one of the oldest settlements of the country that's still inhabited.

The Dark Army (Темная Армия/Черная Армия) is a paramilitary organization from Moskova which is feared by most of the Kingdom's inhabitants and well known for its brutality and use of terror over people, implying the commitment of several kinds of crimes.

As a servant of the Royal Palace

After being captured by The Dark Army in 1362, he and his family got transported to Ulán Shang Kov by horse-hired carts.   While his family ended being jailed at the prison at the Kremlin's North Tower for being considered "suspicious" of conspiring against the Tsar, he ended turning into one of the many servants of the royal palace. There he worked without resting nor payment, cleaning the dirt created by the monarchy in the palace and doing other not nice tasks as helping executioners.   If he dared to refuse to do something, he ended getting beaten or yelled at so he learned to accept everything requested by his superiors, but when they weren't hearing, he could express his discomfort and disgust towards his work and his life at the palace. He even once got yelled at by the Tsar himself and almost got killed by him, but the monarch's involvement in an apparently more important issue saved his life.   Sometimes he used to talk with some royal guards like Ugor and Volk and noticed many of them actually hadn't too much against him, them were in a kinda similar situation to him (in the sense that them were In a place they didn't want to be at), but they weren't too abused as servants.   He used to sneak into the kitchen and the prison without getting caught for giving extra food to his family but by 1366, royal guards rewarded him by allowing monthly visits to his family under vigilance. However, during some of his sneaks he started to urge a plan with his wife for escaping, getting and saving his family and fellow nodvroguites.   By the pass of time, he secretly began to feel a desire of doing something even bigger and a lot riskier than it. He didn't want just to set his family free, he started to want to get rid of Ivar's horror reign.   Then, one night, after months of meditating it, he finally decided to escape. As he cleaned the mess and dirt of the hallway that leads to the Palace's Ball Room very quickly, he was awarded by Ugor (one of the Royal guards he used to talk to) by getting an extra opportunity for visiting his family that month. By taking advantage of a distraction of Ugor, he ran away and after a chase trough the indoors hallways of The North Tower threw himself through a window. It was believed that he died due the fall so he was replaced by another servant.

I came to end this, to free us all. Not only Nodvragoda.
— Vladimir to his older brother

After his escape from the Royal Palace, hid among bushes and then he ran away through the streets of Ulán Shang Kov until he found a bunch of big carts of merchants that was parked near the market. He hid among the carts for getting unnoticed.Among these carts, he found several ones which destination was Nodvragoda and without doubting it he got into it. It was the perfect opportunity for returning to his beloved hometown. By his surprise, he found that was not the only one in the cart who wanted to run away from the capital, as he met there several men from the other stops of the commercial route as Rekalikov, Tula or Bombailog.   He and the outlaw/stowaways voyagers met Aliosha and Dylara during their trip to Nodvragoda and joined the teens' quest.   By the time he and the others stowaways became allies and eventually friends. Them made a great team and helped Vladimir to reach his goal.   Vladimir got widely known for planning and leading the Party Assault to the Royal Palace, a riot that got this name because it happened during a party of the royalty in which were Invited royals of Western countries.   He used his knowledge about the palace gained in his years as a royal servant for guiding his mates and helping them to invade it. The insurrection into the palace did lead to a fight inside it. While the riot was happening, he freed his family from the prison. Instead of running away, he stayed and helped his allies and friends.   THE HEAVIEST SPOILER EVER
After the riot lead by him worked and the Lost Northern Stars could finally reunite and go back to the sky, he was chosen as the new Tsar of Moskova, founding the Kuznetsov Dynasty as Vladimir I Kuznetzov. Contrasting to Ivarosovic, he was a nice, humble and comprehensive monarch whose goal was seeking for the common well of the people. He tried to keep a not too wealthy image compared to the previous Tsar so he only wore the The Solar Crown at special events and usually wore a coat without jewelry.   He abolished the Dark Army and released the innocent people who had been unfairly jailed, ending Ivar's horror machine. Another government measure he took was the restitution of the parliament for helping to have a more equilibrated distribution of the power in the Royalty.
Little by little he tried to undo the damage done during Ivar's reign to communities like Kozzakhi, but despite having gotten a lot of advances, it was a very difficult task to commit in some places like the capital due the heavy influence of the previous government on its people.   His period in the power was considered like a "Bright Age" for the kingdom and he ended gaining nicknames as "Vladimir The Great" or "Vladimir The Kind One". He ended gaining fame of "savior" in Nodvragoda besides being known for the insurrection he did lead and helped. His name went down the history of Moskova. Even during the following centuries he was still admired by a lot of people and he got depicted in paintings, statues and streets named after him. 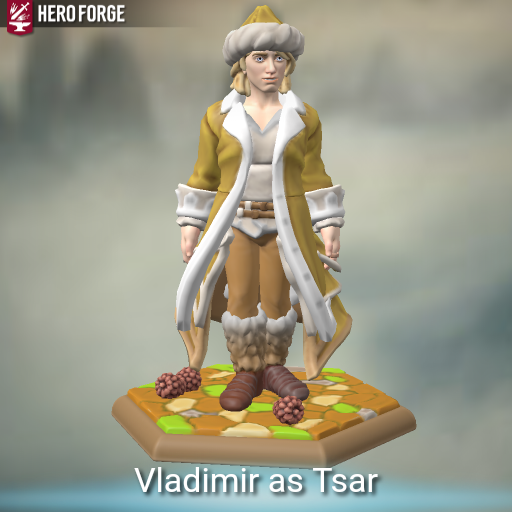 by Gege16 through Hero Forge

Vladimir is quiet, caring, loyal and humble. He's pretty ingenious. As most of the people of his city, he had learned to be patient and resilient so, even despite the circumstances being really dark he conserves some hope for a brighter future inside his heart.   He also got a strong sense of morals as his main conviction is justice, thinking lot in the common well. His brother Ilya always believed him to be capable of reaching great goals in the future. This made him have constant moral struggles during his time as a servant because many of the tasks he was obliged to do were really contradictory towards his convictions.    During his time in the royal palace, he had to see how some of his "work mates" received rough punishments while he wasn't able of protesting against it. Those issues usually made him cry of frustration and anger at nights pretty often, making nightmares something common in his life. He is very selfless, got a big heart and is capable of taking really big risks for helping his family and his people. He is also very nice to kids and animals as he treats Aliosha and Dylara like little siblings.

Vladimir dresses in the traditional Nodvroguite peasant fashion. He wears brown long pants tied by a red rope and a creamy white shirt. The shirt got around its neckline intricate red embroidered design. He also wears leather boots with wool within them for protecting his feet of the cold weather. 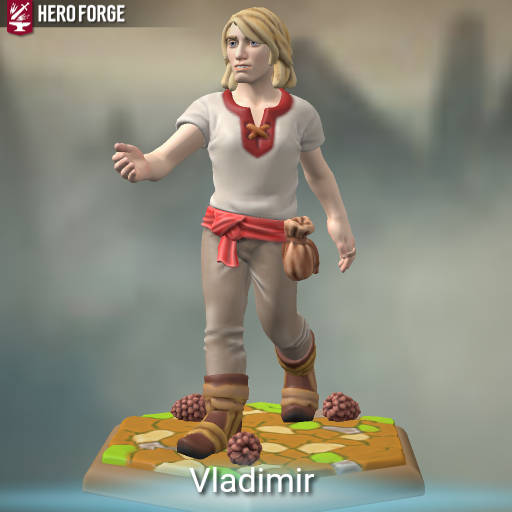 by Gege16 through Hero Forge 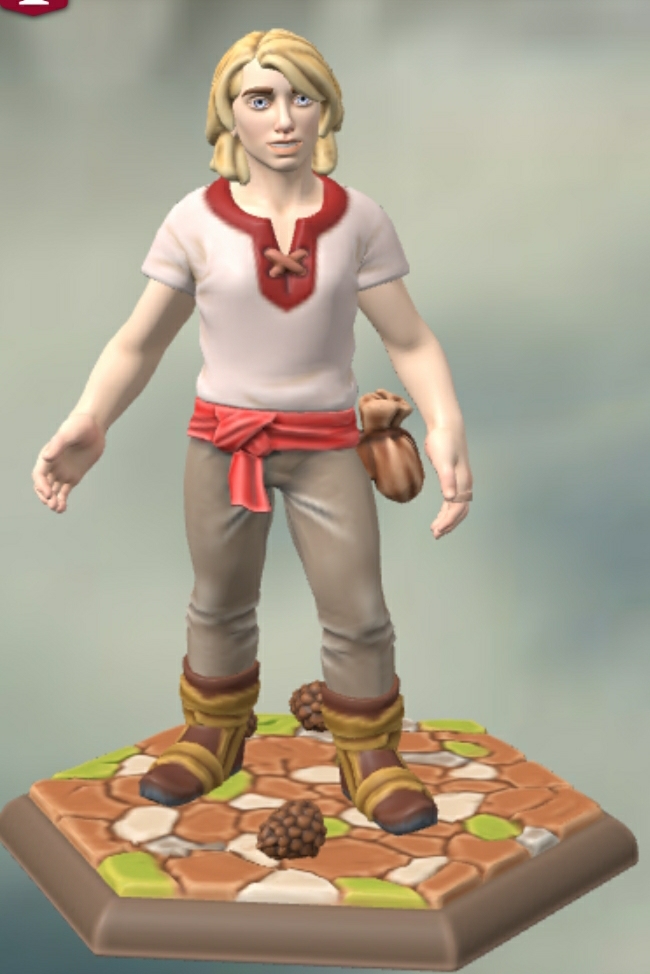 I like that he has a big heart and cares about his people not only his family. I'm glad he survived (but I didn't read the spoiler, don't tell me if he dies!)

Thank you a lot Melu! I appreciate a lot you like it! He's one of the characters i enjoyed the most to develop, is one of my favorites! :) (a good spoiler: Don't worry, he didn't die :) )

Awww, I love him. I want to give him a massive hug. What an amazing story. <3

Ikr? He's very lovable and deserves many hugs! Thank you a lot for reading, Emy! I appreciate that you like it! :)

*applauds* Attaboy! I like this guy, he did good.

Thanks a lot! :) I appreciate you like it :D