Nodvragoda (Нодврагода) is a city located in the center-north of Moskova. It is one of the oldest settlements of the country that's still inhabited and got a very active role through Moskova's history as it's been the setting of many historical events and was the country's former capital. This place is also seen as a symbol of resilience and hope because it had gone through several rough events but it's people always got the strong conviction of standing their ground and waiting for a brand new day after the darkness. The city of Nodvragoda is one of the places in where the plot line of "Seeking for the Lost Northern Stars" takes place. Some characters from the novel who are native of here are Vladimir and Baba Yanga.

Most of the people living is this city is Moskovar but it's also possible finding some ethnicities as Somi people.

Some of the main economic activities of this city are the cultivate of cereals, breeding of sheeps and the use of their wool for clothes and hats and their meat and the hunt of several animals like minks. Commerce also got a pretty important place in Nodvroguite economy as it always has been an strategic trade point for fur, food, clothes and craft. There is a main road which connects this city with southern cities and northern villages.

It is considered that Nodvragoda got officially founded in 850 because the first mention of this name can be traced down in time to that year, but the region and the settlement were already inhabited by Moskovar and Somi tribes, but them tended to fight pretty frequently so their organization of the land was rather chaotic so despite having many cities, none was considered a capital. Nodvragoda was a very strategic point in the commercial route between southern countries Helenia and northern ones like Norsen and the most traded items were fur, textile products and such. Respecting the founding of Nodvragoda as an organized city, its story is sometimes seen as a legend. It is said that the city's inhabitants invited Oleg Grosnik, a prince from a northern nation to be their leader and and helping finishing the constant fights between the tribes so the city could grow into a more organized settlement in peace and unity. Some people believe that these tribes actually got subdued by his forces and others even doubt about the existence of Oleg. The city started to be considered as a capital in 903 . Oleg is considered the founder of the city and later he ended being considered the founder of Moskova. The city grew in population and power because its role in the commercial activities and could get access to several surrounding cities for creating the first Moskovar state. The government of this city was a principality with a big democratic participation as an elected parliament of nobles used to make every decision alongside the prince. The whole people ended having in one way or another, participation in the government. During the period 1030 -1040, Moskova had an invasion usually referred as the Ivasion of the Peoples from the East, in which several nomadic tribes founded an empire that got a large expansion. These tribes tried to implement a feudal and absolutist monarchical system, which was almost the opposite of what Nodvragoda stood for. During the following years,known as the Troubled Times (1040-1055) the central power of Nodvragoda disappeared as the other cities that were currently part of the principality got subdued. Contrasting to Nodvragoda, a city that could get benefits from the invasion and the chaotic Troubled Times was Ulán Shang Kov as it got more power and influence. In 1055 Ulan Shang Kov became the new capital of the Empire and after around 50 years under its power, Nodvragoda seceded. By the way, Nodvragoda survived as some sort of autonomous republic with a good and close relation with the rest of the principality of Moskova until its total subduement in 1362 by Tsar Ivar. The raid against Nodvragoda is the most infamous thing done by Ivar's troops and the The Dark Army as it caused a serious damage in the city (which got burned down and even after many years the traces of the fire were still being visible) and into the population's collective mind, as the trauma turned them into lesser confident and even sadder people, but their hopeful spirit remained in silence inside their hearts.

Nodvragoda's architecture got a more modest use of colors compared to the exuberantly - and chaotic- colorful and luxurious Ulán Shang Kov or many other cities of Moskova. Most of the buildings are white, light, grey, brown and in some exceptions red, giving the city a pretty sober,cold and almost nostalgic appeal. The main materials used for building are wood, stones and clay stone. Most of the buildings got also simpler shapes as many of them are round or square with pitched ceilings. There are also temples with their recognizable golden onion domes, contrasting with their light wall colors. The streets are mainly muddy but the main streets are stone streets. The city's Kremlin is rounded, made of red bricks and it got squared based towers with pitched greystone roofs. 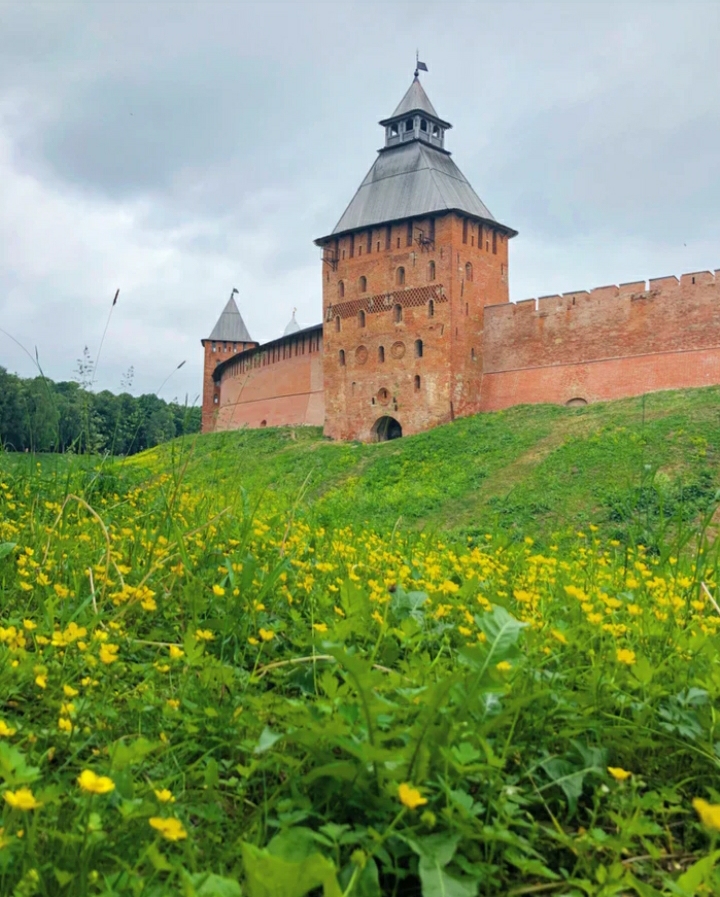 Kremlin by Georgy Trofimov
As a defensive feature, Nodvragoda got a fortress on its southern frontier, and merchants are able of entering through a door. However, there is some vigilance from the fortress' towers and its main purpose is asking the carts' drivers that intend to get into the city, for knowing what products they carry with them and preventing attacks.

Nodvragoda is located in a plain region which biome is the grassland, but is still having some reminiscence of the steppes and is located near the forest. The weather is colder than in southern cities like Barkistán and tends to be grayish, as cloudy and windy days are pretty common. These weather features create a pretty melancholic atmosphere, and in complement with the overall vibe of the city, give an explanation to the nickname "the city of nostalgia ".

The main natural resources of the city are the grass of its huge surroundings fields that are used for feeding livestock animals such as cows and the its land used for cultivating cereals. Agricultural producers also breed sheeps for obtaining wool. When it comes to hunting, minks are the main prey due their fur.  There's a lake close to the city from which the people obtains fishes, water and shells for crafting. Nodvragoda's lake is also a good place for leisure.
Founding Date
850
Alternative Name(s)
The city of nostalgia
Type
City
Population
7.000
Inhabitant Demonym
Nodvroguite

So, a city clearly inspired by Novgorod (also known as Holmgardr) and a whole block of references to Russian history including Oleg the Seer, Ivan the Terrible (known as Grozny), and even the Oprichnina in the form of the Dark Army. As a resident of the city of Moscow, I couldn't just pass by it ;)   Great article, keep up the prep for your novel.

Thank you so much!! I appreciate a lot that you are taking your time for reading and leaving a comment. I'm very glad that you liked it and I love seeing people getting the historical winks and references that, among many ficticious stuff from my imagination and references to other cultures , can still feeling identifiable despite this world not being an exact copy of real history. And I have to say that I feel honored that an actual Russian likes my setting, is really flattering. I'm pretty interested in Russian culture since some years ago and it is one of the inspirations for this world. A lot of greeting to Moscow! I have some friends from there and they are lovely people :)

Explore the Kingdom of Moskova with me!   Is time for  Summer Camp!