Barkistan (Баркиiстан) is a small-middle town located in the Timur Oblast and it is where Aliosha Vladekiev Takhmanov and Dylara Vadimievna Sanaki live. It is one of the places where scenes from "Seeking for the Lost Northern Stars" take place, as it's first introduced in chapter one.
Located in a region that's the transition between the steppes-savannah and the forest, during most part of the year it got a middle dry weather but it also got a humid season which starts when winter begins.

Most of the inhabitants of Barkistan are Moskovar but there's also many other ethnicities living there for example, Kozzakhi. As this town is not a priority of the capital's forces,Kozzakhi people here can get to work in the market unlike In the capital and its closest cities.

One of the main economic activities of this town is the trading of several products. The main point for commercial activity is Barkistan's Central Market , which is the largest market of the town and is located in the central area. This market got a pretty big diversity of products. Another important activity of this town is the animal agriculture as the main species Barkistani people breed are cows, horses, mules, donkeys, sheeps and goats. A species that got a remarkable presence in this town is the camel as them are mainly used for transportation during dry times,but also for obtaining milk and meat. Despite the fact that them are lesser valuable here than in dessertical regions, they are still being a pretty common animal in farms and on the streets of the settlement, becoming one of its symbols. Their presence is also something that's seen as surprising by foreigners.   About the production of vegetables and fruits,the mostly dry weather adds some challenges to it, as producers had to learn how to take water from the river by watering channels for giving the plants enough water. The most cultivated plants are cereals like wheat. Some other items such as textile products like tunnics, weapons and tools are manufactured in the town.

⁸Barkistan was founded in the year 1247 as a strategical point for merchants for connecting the capital with the villages and cities near the forest and also for making it a place where the merchants could have a basement for resting before resuming their trip. The place was chosen because it was near to the forest and a river. In the same place there used to be an older city that got abandoned and in some parts destroyed during the invasion of the period 1030-1040 so the still standing buildings (including the Kremlin) and the the debris of the destroyed ones were recycled.

The architecture of Barkistan is usually seen as "exotic" by foreigners as well as most settlements of Moskova. The houses and other building are mainly made of wood, but it is pretty common finding buildings which walls are made of stone, specially in the central area.Some roofs are gently curved out at the corners in order to allow more light enter thoruhg the windows, and providing shade in summer, while them are also kinda pitched for helping snow slide suring winter. Other buildings got plain roof and temples got onion dome roofs.The most common colors schemes of the town are the earthy colors and warm colors. Outside the most populated area,houses are more dispersed.   Some minor streets are muddy while the main streets (like the one in which the market is located) are stone streets.The main stone used is cobblestone, which is transported from the mountains behind the forest to the city by carts.   Near the Central Market the city got a ruined Kremlin which used to stand long ago before falling down. Inside its walls there are a few temples. The Kremlin's west wall got destroyed in 1300 after a lightning fell near it and the thunder's expansive wave made it collapse. The passing of the years have done its own thing to the other walls,as them got plants growing between its stones. It is unknown if there's a reconstruction planned for this ancient Kremlin (some people say the authorities haven't done it yet because get always lazy about doing it) but people got already used to see it collapsed so it is considered like a trademark of their place. It is believed that this fortress originally belonged to an older city which got destroyed during the Invasion of the People from the East.

The region where Barkistan is located in a plain with a few occasional hils. The plain is next to to the western branch of the Sentinel Mountains, the mountain range that crosses the kingdom and got several branches. Between the plain and the mountains is located the Wild Forest in which the predominant trees are conifers as pines. Close to the city is the Op River, a lowly deep river that's used as water supply (besides some wells the town got). The river Is located between the city and the forest.

The natural resources this town uses for its survival are taken from the surrounding steppe but also from the forest which is pretty close to it. The resources taken from it are wood for construction, berries and animals hunted for their fur. The steppe provides grass for feeding livestock but in when it's to dry it is limited. The closest river is Reka Op (Op rRver) from where people take fishes and water. 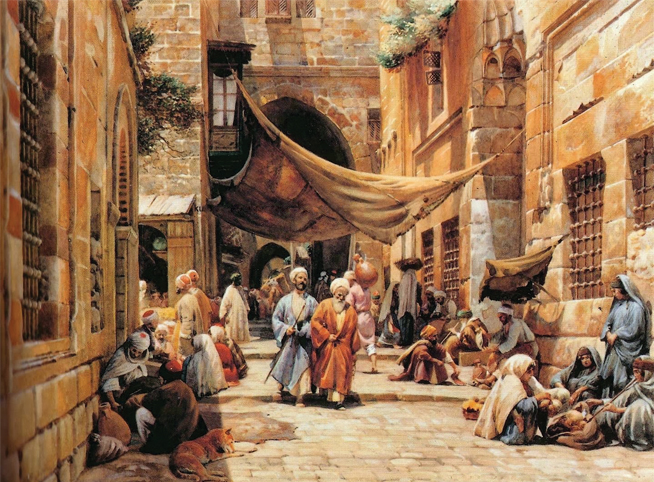