"You can't know if it is worth going into the unknown if you never try it."
— Dylara

Dylara was born as part of the Timur Steppe Kozzakhi Clan which used to be ruled by Vladek, the same day as his own son, Aliosha. As is common in their country,she was exposed at early age to other kids for learning how to live together and the Kozzakhi’s morals and life philosophy. The one who turned into her best friend was Aliosha and this friendship was pretty special because in Kozzakhi culture,when two people share their birthday they have an especial connection between them both (they may share one or more interest and are meant to meet in some moment of their lives, even if they live far from each other) and if they meet and become friends, they’re blessed by good luck.   Her parents, Vadim and Samaria had a good relationship with Vladek because he was beloved by almost every member of the clan but after their children became friends they became even closer. When Vladek started to read tales and tell legends to all the kids at night before sleeping,the kids from both families started to be united by more features: their admiration towards Vladek and their interest for magic related stories. He used to be like a second father for her and he inducted her for learning how to use a sword.   Dylara was such a naughty and hyperactive girl as a little child,she used to be very playful and run every time her parents called her.This made her get some nicknames as “Little Squirrel”. One of her favorite activities used to be riding horses with her parents.   She used to be recognized as the most cheerful children of the clan

After Ivar took the power

When Ivarosovic Groznik claimed the Eagle Throne as his own and changed the traditional title of the monarch from Prince to Tsar (Caesar, Emperor), his heavy desires of making the Kingdom of Moskova even larger and getting more and more resources and money made him lead conquering campaigns that were bigger and stronger than any other ever done before. Kozzakhi peoples were, alongside with Nodvroguites, the most affected ones but Kozzakhi also had to face a stigmatization propaganda and repression from the government due their culture. Mikhai’s presence on the Royalty had a pretty big influence on this situation. Ivar troops made threats on Vladek’s clan (some people think Mikhai’s story influenced in the decision of fighting this specific clan) so he felt the obligation as a leader of defending it.   Vladek’s death affected Dylara in the way she started to feel broken inside but she could handle the desperation over the years by the support of her parents and Aliosha which whom she shared her deep sorrow. However she haven’t lost her whole cheerful personality, her faith and optimism were some of her features that could make her hold on herself and cheer up seeming a normal child to almost every person who met her. She ended being the most positive of the pair, because those features of her personality helped her to hide the sadness very well.   About the move to Barkistan,when her family moved, she became a helper of her parents at clothing embroidery, especially of tunics and ponchos.They managed to get a spot on Barkistán central market.   Even despite ended forgetting the adventurous life she used to have when she was very young like Aliosha and the other Kozzakhi kids who had to become sedentary after the conquest, some bits of her curious and dreamy instinct remained as her hope for a brighter future and thirst for adventures.

Her clothes are similar to those worn by Aliosha, because them follow the traditional Kozzakhi fashion. She usually wears a white shirt covered by a wheat color tunique with red traditional embroidery.   Her baggy trousers are red and made of a shiny fabric. Them are wide and comfortable for jumping or fighting.   She wears a brown fur hat with multicolor feather ornaments.The only difference between her hat and a hat used by a male Kozzakhi is the orange velvet veil that covers part of her hair. She almost always wears it wided but she can screw it up her neck for a complete covering of the hair and neck.The veil and used to have a strong cultural meaning in the remote past,but now is actually used just for sun protection so, is more common seeing old or adult married women using it than children unless they use it for that practical purpose or just an aesthetical one.   Due the typical cold weather of Moskova’s winter, she wears snow boots which are dark red as her hair. 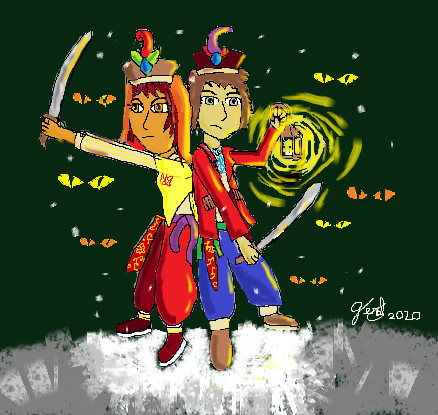 She always has been the cheerful one of the pair. Her optimism (sometimes excessive) is what makes her still trying even when everything seems lost. She is pretty dreamy, distractful, innocent and naive,this sometimes makes her get in trouble.Despite not remembering nothing of her previous life she is still keeping the adventure in her blood, so she sometimes is pretty impulsive and insistent when it comes to take risks. This feature of her personality may seem annoying for some people but she always has the best intentions and likes a lot to help, even when her actions end messing up everything.   She may seem fearless to most people (in fact hasn’t got too many fears), but her worst nightmares are losing the people she cares about (as her family or Aliosha) and The Dark Army .Even thinking about those ideas make her get nervous and if she dreams about them, it means it’s gonna be a really bad night. She’s very curious and friendly so she tends to ask a lot of questions when she’s doing something new or meeting new people.

"Take my hand, make a stand, and then hold your breath See what comes, see what runs, in the face of death How is it that you never seem to worry?   In the end, I must bend, and then hold or break Kneel to pray, come what may, when my soul's at stake And you loosen all the knots with a smile on your face"
— Visions of Atlantis, "The Deep and the Dark" 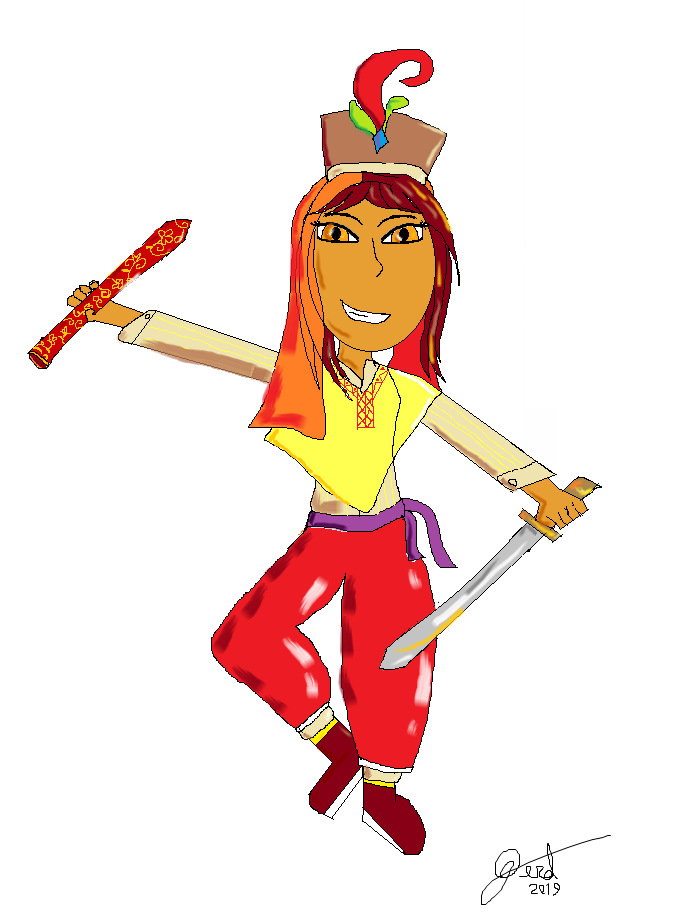 by Gege16
Concept picture for a realistic depiction of Dylara as a young adult. Made using Pics Art 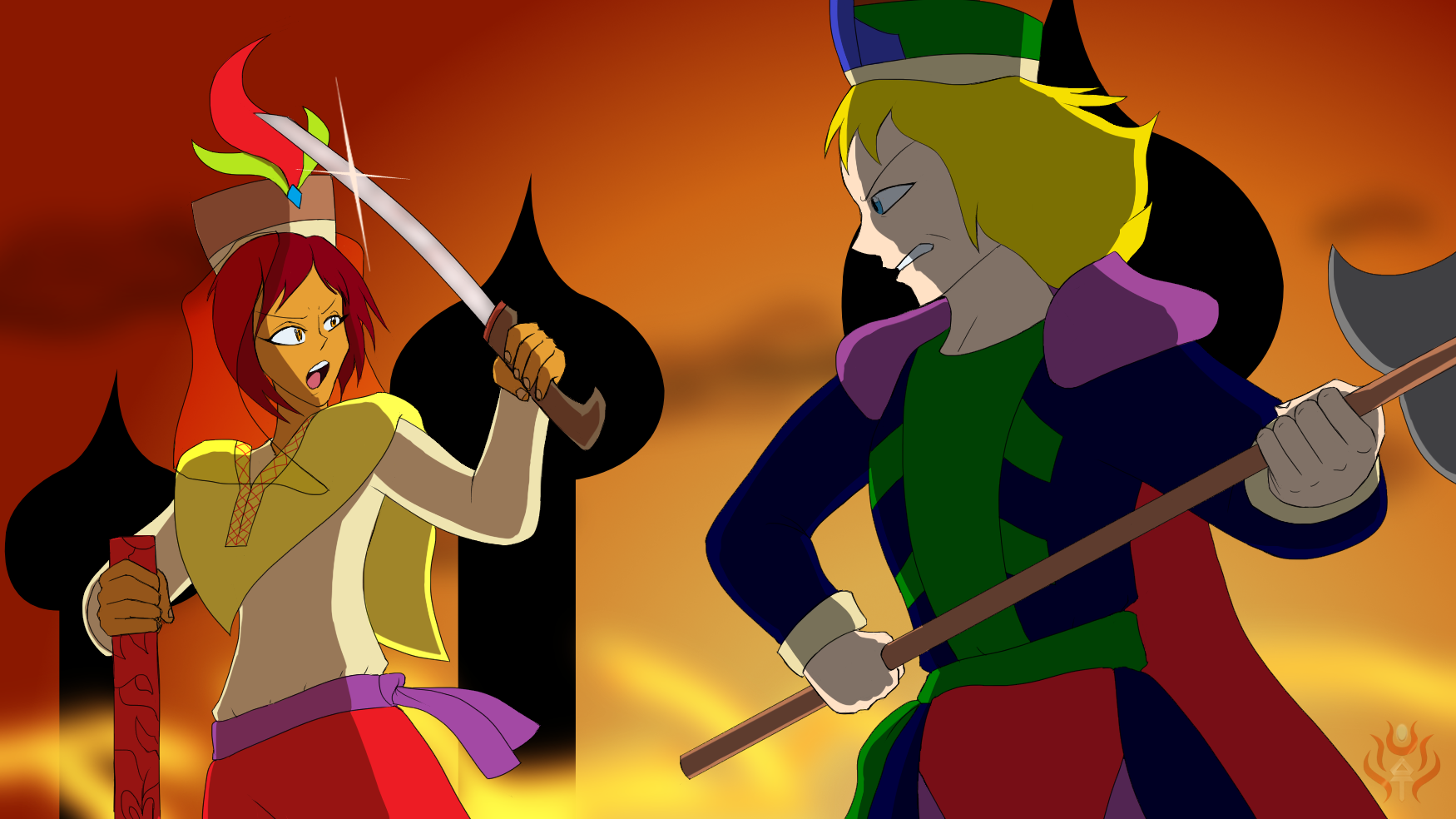 I really like that you included how her life continued after the great conflict. It's also really wholesome to read that she found peace :) The Trivia part is also a nice idea to quickly give an overview of her personality and traits without having to write a lot of text.

Hi!! Thank you so much for reading and commenting, I appreciate it so much !!! :) I'm glad that you liked it! I think I will write how her life continued during the novel in which she's protagonist and after it when I'm done with the chapters so the backstory section will be updated sometime. Yes! I think the trivia section doesn't just give a few of flash curious facts,it can help a lot to imagine how a character's personality is and can give it some realism since maybe someone of us can relate to at least one fact. It is also fun to write! : )

That sounds great! :D It's a good point that the trivia might list things one can relate to :)

I like to read of a fairly lighthearted character, that despite having reasons to feel down, fight back and tries to find a solution. I have noticed that you use in the clothes section the word "pants" and, despite being understandable, in the UK most people will read it as "underwear", you may wish to use trousers or some synonymous word (hopefully I am not too peckish). :)

Hi! I'm glad that you enjoyed reading her story and liked it! :D About the word, at school we used to call them pants and I was used to it so i didn't knew about the other meaning (at English class we used to call underwear...just in that way) but is good to know about more synonyms! Is good for widening the vocabulary and preventing funny misinterpretation xD Thanks a lot!

I have learnt it myself moving over here. A lot of words are slang, therefore different from what they teach in school. I believe the in the United States pants has the meaning you use in the context, never been there to learn otherwise though ;-)