Planes of fire exist above the cushion of air called the sky. Under the ground is cold and darkness, no fire or "lava" within the crust (aside from fire pulled under with lightning). Icy areas are areas low and away from the Sakzyg Oiov poles (valleys below sea level having snow while mountain tops have wildfires). Some "stars" can be of different colors or can be seen during the day. these are actually dense pools of flame high in the sky. Also, Like mountains piercing the air and water making troughs in earth, fire and air share a similar structure high in the sky (though it is frequently shifting).
And, as caves and large bubbles in water are pockets of air, the ground can have pockets of fire and water too; or the air having pockets of ground and water (floating islands and rivers/pools), or fire more dense air. And every other "domain" can have pockets of other material that didn't fully mix and/or disperse.


And I'd thought I'd be safe from rainy days when I moved to this seafloor city. Though it is pretty with all these bubbles everywhere.

Just as the surfaces has, the underground and large bodies of water have their own weather and climate. Underground has a form of rain where water seeps through the ground, either escaping upwards or falling down. Vibrations and tremors act as wind storms. Caves may get clouds, or wildfires. Water has more kinds of weather: sudden currents, freezing, ash or sand from storms above falling down into the depths, vibrations and tremors, bubble storms, and so on. These phenomenon are not has well known as surface weather, as it is only the Ayabba’aru who live under the waves and predominantly the Solumkerd who find home in deep caverns.

highest in the atmosphere, above where most fly and just below the sea of fire. It is where clouds come to be blown about and coalesce before until they can hold themselves aloft no longer. It is where the winds are strongest, tempests no one could see or survive. The currents of wind are more streamline, less susceptible to change than the meso or lesser winds.

Lower in the atmosphere where most choose to fly. The bottom half of the Meso Wind is where most floating land comes to rest. The weather the Meso Winds control are not as strong as its older brother, and more localized. Meso Winds have more variation in direction and types of weather over smaller areas.

The wind on the ground where most beings walk, grow, and generally use. Right on top of the Kag/Nep mass which has unique weather different from the Meso and Greater winds (mist, tornados, heat patches). Are extremely local and have more variation than Meso and Greater winds.   In Kald, wind is pushed down from hot above to cold below. The currents spill down mountain tops, over the land, and out to sea before getting sucked back up above. Because of this east and west winds meet and collide at the Rot Saegri, stirring in very strong winds and being pushed back up into the sky (Imagine two currents crashing into each other).
Wind systems swirl around cold low points such as the valleys in the Hasehak/Kexist valleys and the three sister lakes (wind systems creates swirls around the lake with the winds being colder where two lake swirls meet and warmer on the peripheries).
Winds start their flow from mountains because air is repulsed by earth, so earth spikes pushes the wind horizontally rather than a flat spaces verticality.
That would mean that water currents would work differently as well. Underwater currents would be coming towards the shore while the surface currents would be traveling away.
there would be some erosion to the land that is underneath the water's surface, and there could be some overhangs from the landmasses toward the seas. And potentially some underwater-ey tunnels that lead to the land

Rain is defined as any substance either falling or raising up through the cushion of air in the sky. It can rain any element, though water is the most common. Fire can comes down in slow ribbons, or can come down as lightning. Other forms of rain include falling dust or dust storms. Some rain, named pattern rain, has their droplets fall in patters; droplets always falling in the same locations

Spark Blisters, or simply Spark, is a phenomenon when sparks of energy pop in an area. Most of the time these sparks are harmless, but larger storms can set things on fire or flash heat an object. The onset of these spark blisters is usually a rise in dry temperature. Spark weather is when pockets of flame collapse and create random sparks in a given area.

From the outside, Rainbow Fog looks like a fog of bright light. But when one is within the fog of light, the worlds colors distort. It is different for each species, but the colors things change too, and their perceived textures all change. A shiny red apple may become an orange and blue apple with the texture of cloth (it changes sight not touch, it still feels like an apple). Other affects include the fog energizing the ones within, having them wanting to do things. It also masks and subdues one's ability to sense auras.

Clouds of millions of small air bubbles exist deep within the ocean, being pushed around by currents. The bubbles do not join into one pocket, but stay as millions of small spheres of air. When they are pushed together, they escape upwards, rising to pop at the surface. This can be a simple dribble that will tickle those who enter the bubble storm, or it can be torrential with swift currents being formed from the rapidly rising bubbles.

Rolling Darkness always occurs at night just before dawn. It is when a large bubbling mass of thick shadow falls from the land and into a body of water (mostly the sea). It rolls down the floor of the shore, into the sea, disappearing into the dark depths.

Also known as Blood Moon and Crimson Sun, these events happen when the sea of mur is so dense, it filters the light of the sakzyg, turning the light it casts into a bloody red.

On this hallowed night, we shall lay our fears to rest. Under evil skies may we conquer what we dread, what twists and chokes and drags, our evils and demons that slowly consume us.
— Kanøu follower in preparation for Fright Night

Bubbles of air are pushed horizontally through the ground. Behind the bubbles collapses the eart while the front of the bubbles burrow through. If the bubbles are small, it is more of a tickle to anyone caught in it. But the bubbles can be the size of large caverns that, when collapsing on the sorry sort, could be very dangerous. A Sweeping Collapse is initiated in softer more clumped together ground, when one part of a cave collapses in on itself, it pushes the air to the side or up and to the side. This then pulls more in where the air pocket moved away from, perpetuating the motion untill the pocket reaches looser or harder ground. 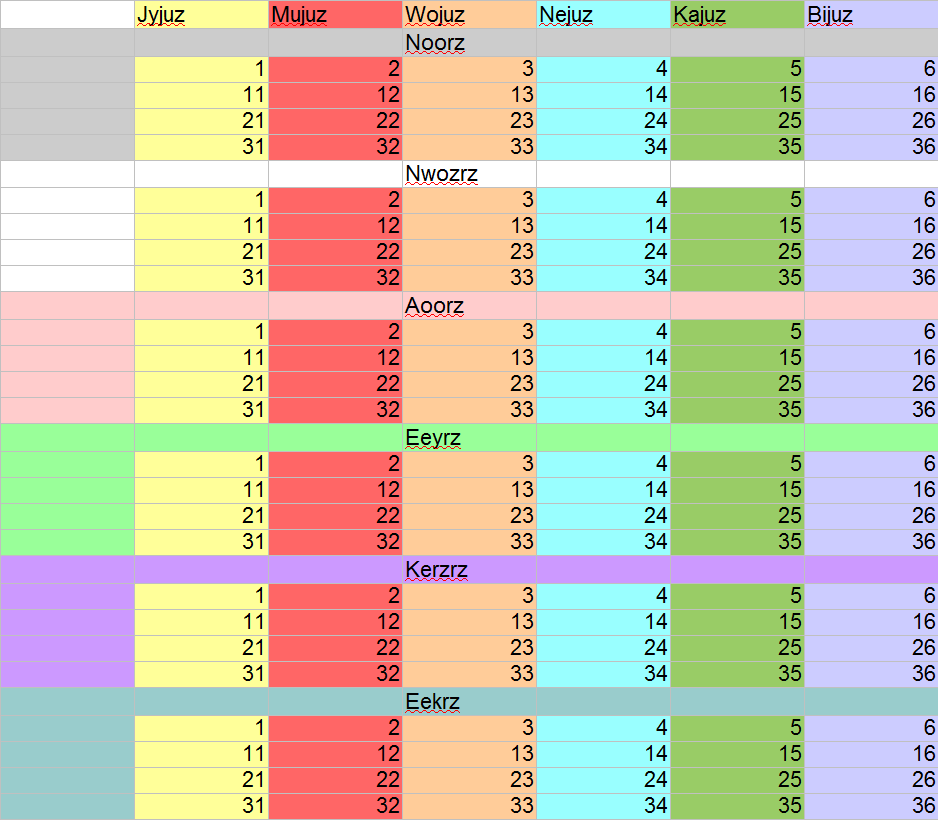 I've seen rain of water and heard about rain of fire. But rain of shadow? That's interesting. Good article. The time division is very cool too.

Thank you so much! Though the rolling darkness is less rain and more of a boiling fog that flows from the shore into the ocean or lake. Rain of shadow is still possible though, might have to add that ;D

Heath O'Donnell
Content | 4 Quite a lote to break through! This gives me a very good idea about all of the planes various weather and phenomena and is very filling on the technical side!
Technique | 3 Good use of the sidebar, and good seperation with headers. I might suggest messing with Key Value Pairs for your Terms Section, as well as the Other Seasons portion. A quote or two would not go amiss!
Style | 3 Many of the sentances lack any flow, and come off very staccatto. I feel like I've been presented with random, if slightly connected, bits of information in each paragraph.
Overall | 10 A good article with lots of information that I vould see getting brought up elsewhere in your world quite nicely. The CSS is also nice. Keep up the good work!