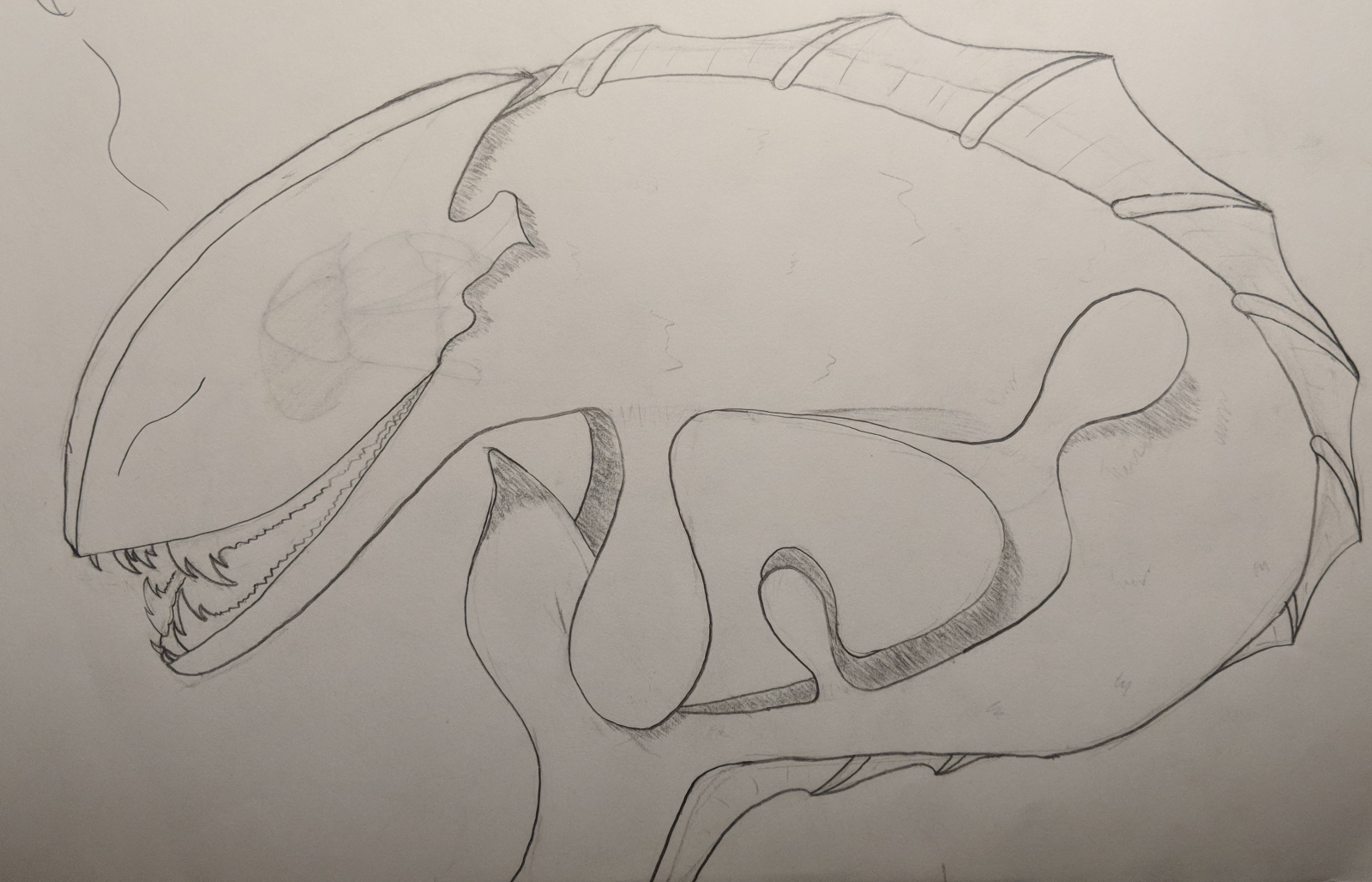 The Ayabba’aru’s most prominent feature is their exoskeletal skull. Females have wider and longer skulls while males have horn-like protrusions. The skull completely encasing their head, covering where they would have eyes, leaving shallow divots. Without sight, they rely on sensing movement in the water and the auras of other lifeforms to “see”. On the bottom of their skull, bordering their jaw, the bone is serrated mimicking teeth.

It is only their skull that is exoskeletal, with the rest of the bones being endoskeletal. Starting from under their skull to the end of their tail, they have one long membrane that wraps over spines protruding from their back. These spines are not part of their spine but are completely separate with muscles to move them under their scales.

Along their sides they have thick plated scales, harder than thick keratin yet thinner. Their scales are also fairly large in proportion with their size, when compared to most other fish. The scales on their bellies, though softer, are still relatively hard. Most Ayabba’aru scales are blue-grey in color, their belly scales being lighter than that of their sides.

To move, they propel themselves with hefty swings of their tail. The use their six paddle-like fins to both help propel them and to steer them when moving swiftly through the water. They are able to reach speeds that would make a diving avian blush. Though they are only able to achieve these speeds in very short bursts.

Carnivores
In their pods, they dash into any large grouping of fish, sensing their frantic movement in the water to track and catch them. Most of the fish they swallow whole, relying on their speed and precision to overtake them. If a fish is too wiley, they use the serrated part of their skull to catch and rip into the fish. If all else fails, they use their heightened telekneesis to try to pull the fish into a more favorable position. Most fish have adapted to resist the telekinesis, so they use it rarely.

The female has a larger frayed end to their exoskeleton, to house the eggs. A better suited female is one with a wider and longer frey, to hold more eggs. They are also much larger than the males, nearly twenty times. To choose a fitting pod of males, they actively seek to harm males, sometimes going so far as to eat them.

The male is much smaller, and form large pods to bully the females into mating. The pods are so large to combat the females pods, having them all submit or drive one female off to be bred with. Males also have horn-like protrusions on their exoskeletal skull.

While females do have animosity towards males, they are very friendly with like genders of other species. They dislike males of other species too, but tolerate them more than their own. Both males and females create gender exclusive pods.

When preparing for mating, the female moves her eggs to the underside of her exoskeletal skull, on the fringes overlapping their body. The male pod then frantically fertilizes them, swimming away before the female is no longer receptive to them. The female keeps her eggs under her exoskeletal skull, her movements through the water giving them constant clean air in the water. Other creatures sneak behind the females and snatch their eggs to feed. Females, to combat this, form pods to guard one another’s eggs.

Strange to other fish, the pod of females take care of the young that survive long enough to hatch. And for the young that do hatch, the males are quickly cast off to fend for themselves. Most immediately form pods of their own or join the pod of males who follow in the shadow of the female’s pod. The hatched females join the pod, and are guarded by the elders. For every one female, five or more males are born.

Bahju'eru live in ocean reefs and near shorelines while the Sapma'alu live in deep rivers and lakes. It is at the throat of the Rot Saegri that the two distinct variations meet. They keep their distance from each other, keeping to their own pods and farmland, rarely interacting with each other beyond casual meetings and trading. They find the other species undesirable.

Due to how naturally adept in telekinesis they are, they manipulating their environments to be more suitable for larger schools of fish. It is unknown if they created this form of agriculture by learning it from one of the many land-based species with this development or had come to it themselves.

Bathing: They shed their scales with every change of the season, rubbing against rocks and other hard objects. Their scales are hard enough that they leave marks in the rock.

Though they live under the waves, they have strived to make contact and open communication with their fellow rela on land. This is most evident when they seeked to be deemed sapient after seeing the muzoval had been deemed the same without striving for it. After years of petitioning, they were finally accepted.

Their major Reln is nep.

Live deep underneath the oceans where little light permeates.

Live in shallower waters, such as reefs, lakes, and deep rivers.
Rela

Their original name was Saestel.