Everything and everyone are made of the bases of existence, reln. Primordial, the two Aoreln, Dax and Suz, have governance over the six Nureln, Jyk Wox, Mur, Nep, Kag, and Bil; each Aoreln having three Nureln respectively. Each reln, too, have eight components that they represent in life: form, time, sensation, color, element, body part, emotion, and motion. Moreover they, in and of themselves, have one representation that they have sovereignty over.
By themselves, via various structures, concentrations, positions, and mixtures, reln create all the world. Though a kind of metal and a kind of rock might have different properties, it is how the bits of kag coalesce, its interactions, and combinations with other reln that make them the way they are. Everything natural in the world is reln interacting with one another to make things. It is through intervention that the reln are separated into their natural states. 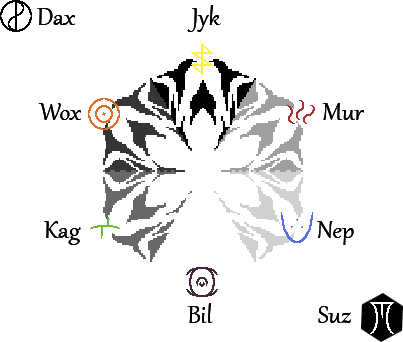 Because of the different pressures from each reln to another the world was formed by the Sakzyg Oiov encircling other reln, pushing them into a center. Bil sunk to the core, Kag layered on top, with Nep filling where it could, Wox Above, and the outer limits being of Mur. Beyond the Sakzyg lies a vast void of scattered reln, bil being the most prominent. On the shattered half of the sakzyg, the zuyg, bil tries to fill in as many gaps as it can, the pure radiance of the ring dimmed from the dispersion of jyk.   Although Reln have a specific state they are native in, they can change in some circumstances. It is easiest for a reln to change to a state that is slightly hotter or colder than their natural state, such as Nep becoming a solid or gas. The further away the native state is to what it is to become, the harder it is to change. Such as there is rarely a Kag that becomes energy let alone an inconstant state.   Movement is the action of passing through a reln. Swimming is through nep and blinking is through mur. While specific mechanics make moving through a reln easier such as hollow bones for flying, there is little to limit something from being able to move through various conditions.   Ssnmuz (conflicts) & Sswa (Wishes)
Oo (Life): Jyk-Bil
Id (Substance): Wox-Kag
Suz (Soul): Mur-Nep
All relns push away from each other, some more than others (they also attract their like)
Dax - Suz have the most force
Jyk and Bil have the most force of the Nureln
Mur - Nep
Wox - Kag
Bil - Mur
Jyk - Kag
Wox - Nep
Mur - Kag
Bil - Kag
Jyk - Nep
Bil - Wox
Jyk - Wox
Bil - Nep
Jyk - Mur
Mur - Wox
Kag - Nep have the least
Reln native temperature (makes shape of jyk when connected from hottest to coldest)
Jyk - Hottest
Mur - Hot
Wox - Warm
Nep - Cool
Kag - Cold
Bil - Coldest

Metal is purest kag, other earthy substances are impure with nep or other.
All aspects applied to each reln is how they are perceived to be. No one truly knows the nature of reln, and only apply the aspects as they notice their correlation. There are plenty of inconsistencies, such as: If life must consist of all reln, why are some forms of life able to live without skin, though it is a base aspect of the rlen Bil.

Very original, and a great idea. Hats off to you!

Thank you so much! I'll be sure to add more and clarify more stuff when I get back to it another day ;D