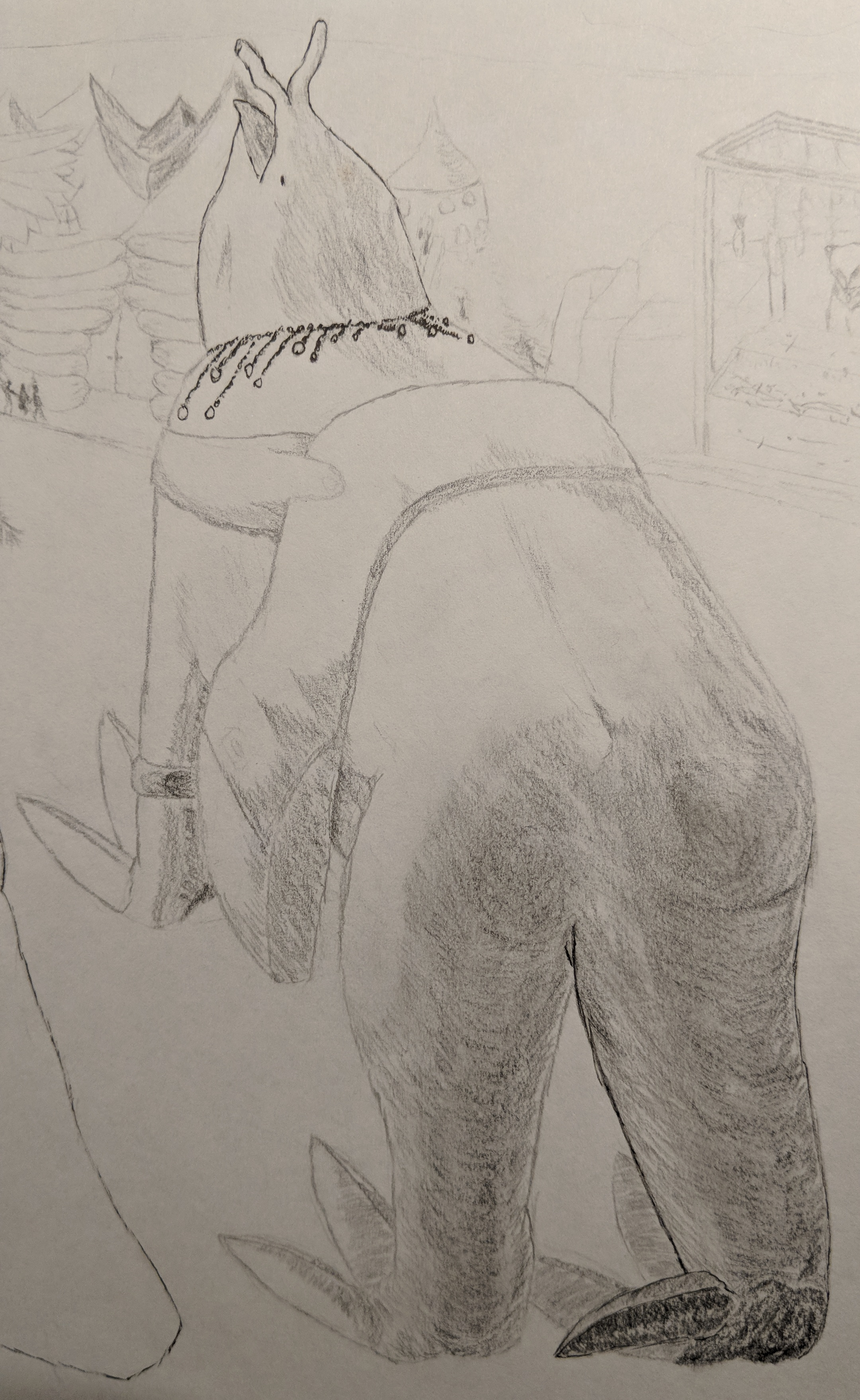 Solumkerd have a layer of blubber beneath their thick dark grey to wooden brown hide to fend off the cold of living underground. They also sport a thin coat of fine black fur over most of their body to repel dirt and to see. They do have eyes, but they are underdeveloped, relying more on touch and smell to see. Each hair root is highly sensitive to vibrations in the things the hairs are touching. All around their cheeks, chin, and forehead they have even thinner hairs that match the size of their body. They use the special whiskers to tell whether they are able to fit into a whole or if they would have to make it larger.
In more open areas, such as larger caverns or the surface, where they don't have many hairs touching ground, they use their sense of smell to experience the things around them. Their sense of smell is not the greatest, but they are more sensitive to the scent of temperature as a compensation.
Solumkerd are quadrupeds with four trunk-like limbs. Their joints are very loose, allowing them to splay their limbs out an above their belly. Their loose joints also allow them to spin their limbs in 180 degrees both clockwise and counterclockwise. They use this range of movement to push and pull the ground around them to either dig or build their homes. Their forelimbs are more muscular than their back limbs, as they use them to break apart stone while their back limbs are primarily used to push back dirt or shattered stone.
The size difference between their fore and hind limbs also applies to their claws, their hind claws being smaller than the foreclaws. They have five claws that encircle their balms in two-hundred and seventy degrees. Their claws quite large, half the length of their limb and a third as thick. They curve like shovels with pointed and dangerously sharp tips that they use to dig into and break stone.

Solumkerd are omnivores, eating anything they filter in the dirt they eat, small insects, roots, burrowing creatures, and the like. As they dig, they eat any loose dirt with the scent of living things in it. The expel the non-organic material from glands in their cheeks while they chew with large molars in the back of their jaws and teeth-like formations of cartilage on their tongues. If they are able to fit it in their mouth, they will eat it.
While this form of filter feeding will sustain them for a time, it is not enough to support them completely. They also hunt near any creature that burrows. To find their prey they use their fur to feel for movements within the ground, rapidly burrowing towards their prey once they sense them. Their potential meal sense their approach and try to flee, but the solumkerd use their massive claws to pierce and or cut their victim, killing them near instantly, in one swift and calculated stroke. After they dig out their prey, if it is large they use their incisors to cut into it.

A group or labour of solumkerd is made up of one family. While not all in the labour are directly related to one another, each are treated as relatives, even new members who may have come from a far off land. Solumkerd are so loose with who they allow into their labours that other species have found protection by becoming one of their family. While solumkerd allow nearly anyone into their labours, they keep their distance from other labours, not mingling or allowing a group entry. This leniency with who is allowed to be part of the labour comes with some danger though, as anything that is seen as a betrayal of the labour is harshly punished. The perpetrator of the betrayal can be beaten, exiled with no hope of redemption, or even killed depending on the offence.
They are as liberal with their family admittance as they are with who they breed with. There is little conflict or stigma with who are able mate with who, nothing either sex does or looks like affecting how attractive they are as a mate (unless the mate has noticeable deformities or is sick). The choice of those who mate comes down to who are in heat at the same time. Both males and females only have select times that they are willing and able to breed, about only once or twice a year.
Solumkerd give birth to one child at a time, in rare cases two but never more. Both parents will take care of the young until they reach maturity, not going into heat again while the young grows. The young mature rapidly, being able to breed after their fifth year. The child continues to stay with its parents, not reaching mental maturity for many years after. During the child's upbringing, the family stays within the center of the labour with other child and parent units.

Solumkerd spend their lives underground, some never bearing witness to the Sakzyg Oiov. If they hadn't grown reliant on the need to communicate with surface dwelling species (for trade, religion, politics, etc), they would not come to the surface. They prefer to live in the underground climates of vast cave systems and moist ground (as opposed to more dry or more wet climates or areas with narrow or no natural cave systems).
Solumker use both the natural cave systems around them and create their own. The typically make their homes just off of a large open cave (some being so large to have rain and other Climate & Weather). They dig out a complex system of roads, homes, and public areas they use similarly to villages. They make their villages close to such large cave systems as an easy access to food.
Solumkerd hibernate, which is unique among Rela. Their hibernation does interfere with their interactions with other species, disappearing for two seasons every year, the dead season and silent season (See Division of Time). They all huddle into a large closed off pocket of air deep within their village, forming a giant mass of sleeping bodies. The children and their parents are kept in the center while those with thicker hide sleep on the outer ring.

Bathing: Simple answer, they don’t. That is to say, they don’t actively or purposely clean themselves. The tunnels they dig are only just big enough to fit their bodies, scraping at their calloused hide constantly. This clears away any surface debris.

I’m curious about the Solumkerd. Do they inhabit only colder caves, like ice caves? I can’t find much on how cold rock caves are but I’ve read that it can be anywhere from 55-65° F underground which is relatively warm. So I was wondering if those from ice caves might have thicker blubber and overheat in rocky areas or rocky individuals get too chilled from ice caves.

Their major Reln is Kag.