Can't you hear the world crying out in pain?
— druid

Gaia's Lament is a current ongoing continent-wide crisis and conflict that affects the entirety of Takawaoku, and as a result, the entire rest of Istralar. Currently, it is suspected by certain entities that the Earth-Mother's Gift, one of the Shards of the Void, is heavily involved and a potential cause of the Lament due to the aberrant behaviour seen throughout the continent, particularly in regards to the effects on the dead.   The Lament is not known to have direct kills. However, its effects have proven extremely deadly, and for every day that it continues, more citizens of Takawaoku fall. Protective measures are in place throughout all countries, but keeping the entire population safe and fed is a nigh-impossible task.   Intriguingly, the exact starting time of the Lament is impossible to pin down. Despite it afflicting the entire continent at once and many of the involved nations keeping meticulous records, no two accounts of when the Lament started agree. The only consistencies are that it began recently, within the past few months or years - and that its effects are still deeply felt.

We awoke to the sounds of deepest grief. Not audible to our ears, no, but resounding in our minds; we felt at once like we had lost something utterly dear to us.
— citizen of Rhaead

As far as the various countries, tribes, and peoples of Takawaoku were concerned, there was no evident warning of the Lament's oncoming. They were simply swept up in it when it happened, in the very early hours of a day in the mid-5620s. All sapient beings were suddenly overcome with a deep grief and a sharp pain that brought all, completely involuntarily, to tears. At first, this seemed like an odd magical phenomena, but nothing to be greatly concerned by.
It was when the day came that the effects of the Lament began to become apparent. Those relying on magic to create food or water - perhaps as their only sustenance, even - found their magic failing them. Worse, countries structured around the production of magical food for large-scale agriculture and industry found their magic, too, now failed. Immediately, messages began to fly across the continent, and meetings were scheduled.   When the first mages to teleport found themselves driven far from their intended destinations, they knew things were more bad than they had seemed. Not only could they no longer sustain themselves in the rough lands of Takawaoku - particularly in desert areas or the Xotlan wastes - with food and water created by magic, but now they could not even consistently teleport. 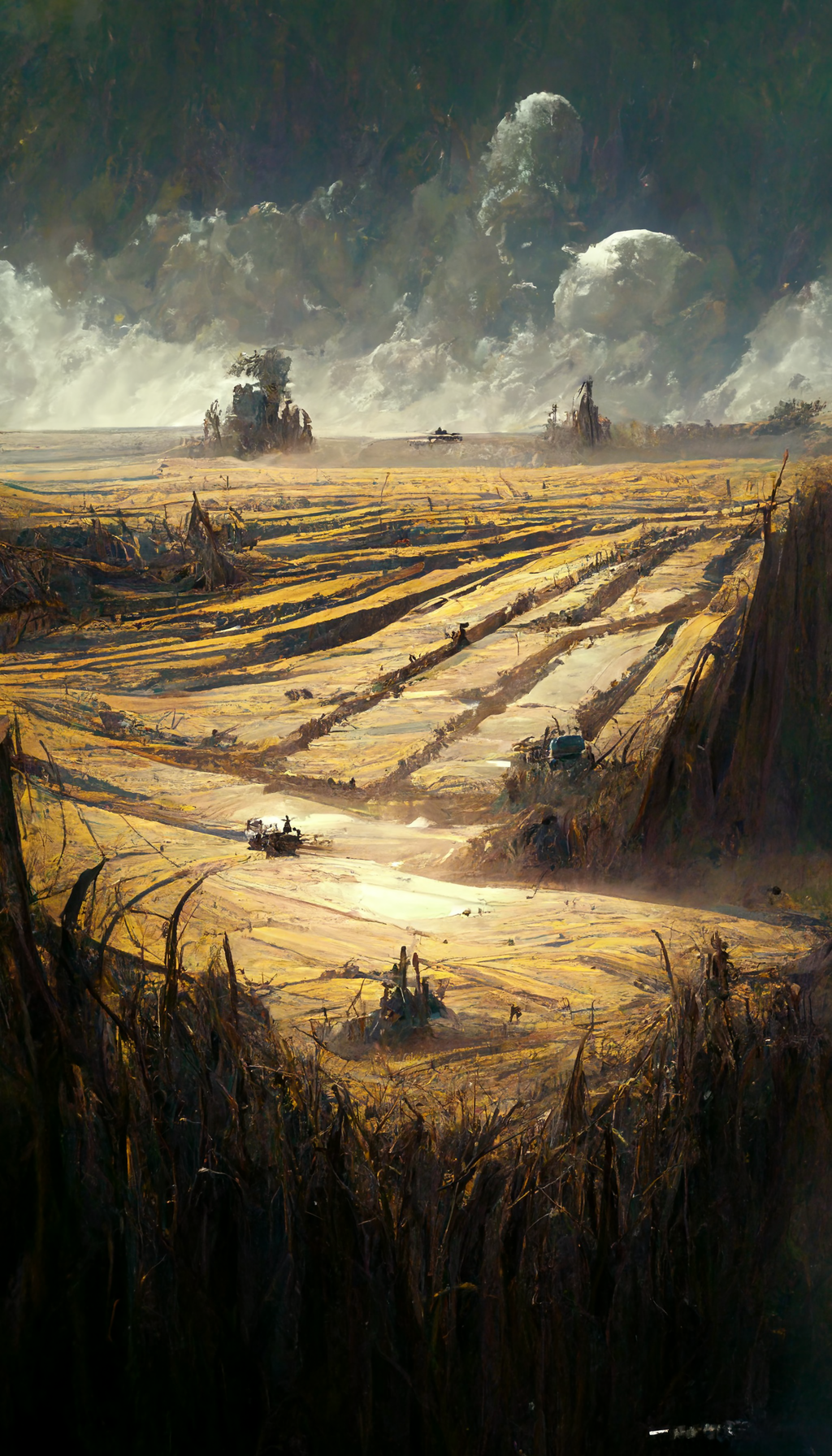 Barren fields by Hanhula (via Midjourney)
The news only grew worse when outside aid was sought. Teleportations beyond the continent failed entirely. Requests for outsiders to travel in via magical means failed. Attempts by said outsiders failed, whether they tried by sea, air, teleportation, or even elf-gate. Takawaoku was locked away from the rest of the world, and far more dramatically than Kudara before it.   Finally, the worst effect of all was discovered: the Lament's effects on the dead. All who died were not left as bodies to rest; instead, they disintegrated into a fine black mist that disappeared entirely after a few moments. Inspection of this through magical means revealed that the souls of the dead were not being sent on to the River of Souls: they were consumed by this blackness, and forever lost to it. Naturally, this threw the leaders of all nations into a frenzy - and though this particular effect is still hidden from the bulk of the continent's populace, more are learning of it every day.

Us, saving mortals? Oh, no, no, you misunderstand. We're not doing this for your sake.
— Socothbenoth

In the short-term, drastic measures were put in place to assist the suffering populations. Shiar acted swiftly through the powers of Divine Queen Asfiya and the numerous universities across the nation; existing infrastructure, especially that developed by Holy Princess Chandna, helped them greatly. Rhaead followed suit - as a nation well-versed in food struggles through their Underdark populace, they were uniquely able to adapt, though they do continually run into significant challenges.   Worryingly, demigods found these new rules applied to them as well. Eight demigods were trapped on Takawaoku at the time of the Lament, and seven of these were capable of immediately leaping into action. For once, too, this was a threat requiring good and evil cooperate. Though the good-aligned demigods chose less obvious routes to provide their aid, travelling in disguise and teaching sustainable methods of survival, they did aid Belial and Socothbenoth in the construction and operation of the Silkways. 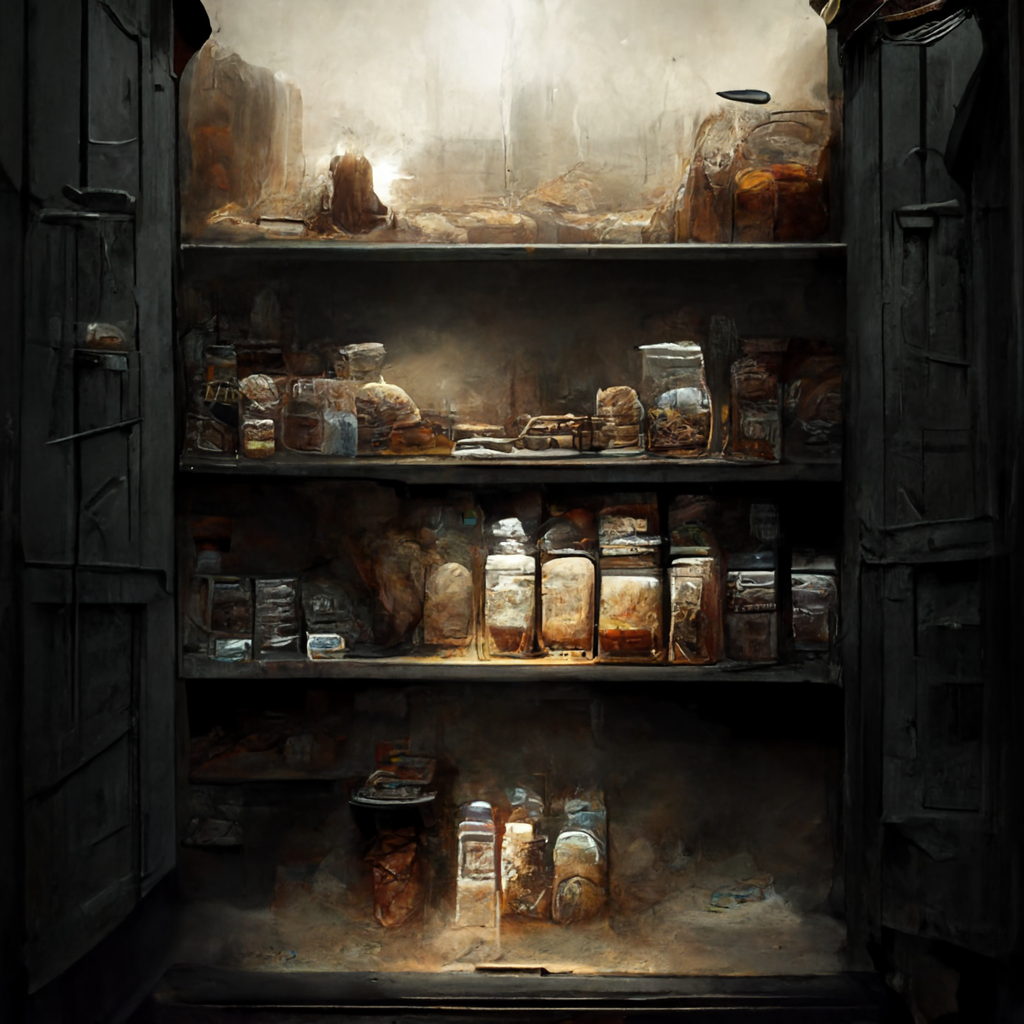 Empty Shelves by Hanhula (via Midjourney)
The worst-off were and are the more disparate nations. Forced to rely on often-twisted methods of survival, the scattered, distant populations of nations like Bharaduz are drastically suffering under the Lament, their numbers falling lower each day.   They live in deserts and storm-flooded jungles, scorched by heat that requires a significant flow of water to survive. Without it, they will die.   Only significant intervention from external states and actors is saving these distant populations right now, and even that is very limited.
Conflict Type
Siege
Battlefield Type
Planetary
Start Date
5620s EA
Ending Date
Ongoing
Conflict Result
Ongoing continent-wide crisis
Location
Takawaoku

Continents' worth of people
The planet

Reading this article is like reading a great book report or a recap of season 1 in an excellent TV series. It is strong, large scale even affecting demigods and magic the very laws of the world. What a great environment for characters to move forward and poke how the world functions now as to what was always accepted is now turned on its head.