Beautiful, driven, and sweet - oh, but if she were only a little more like her mother.
— one of Chandna's critics

Chandna, daughter to Divine Queen Asfiya and the current sole heir to Shiar, is a pleasant and kind young woman who, when not dressed for occasions, does not seem like she holds the title of Holy Princess. Somewhat of an idealist, she is currently studying politics and advanced applications of magic at the University of Masdarat as a graduate student, having already attained certification in economic theory and natural magical phenomena during her late teenage years.   Like her mother before her, Chandna was originally trained as a cleric in her youth. She has continued her studies in her own way, choosing to experiment with magic rather than continue to follow in her mother's footsteps.   Her duties as heiress to the Divine Queen take up a large majority of her free time; when she is not studying or carrying out various ceremonies, she often finds it comforting to escape to the safety of her bedroom, where her trusted ladies-in-waiting - all chosen from her closest friends throughout her adult life - help her to avoid thinking too deeply about the burden she will one day bear.   In this, she is grateful for her family's divine gifts - chief among which is her mother's seeming inability to grow old.

Chandna is a woman of average height and slight build, often dwarfed by her mother and those around her. She carries herself with a quiet determination when in public, but tends to relax more fully in private. Her hair, thickly textured and tightly curled, is often styled into various beautiful braids if she isn't leaving it to sit naturally; she often accessorises with various gold beads, charms, and tiaras.

Chandna was born to Divine Queen Asfiya and her consort, Dayaal of Shiar shortly after the turn of the century. Her birth was considered highly auspicious; golden meteors shot across the sky in a beautiful meteor shower, and the drought that had been plaguing the country cleared in rapid time after the girl's birth. 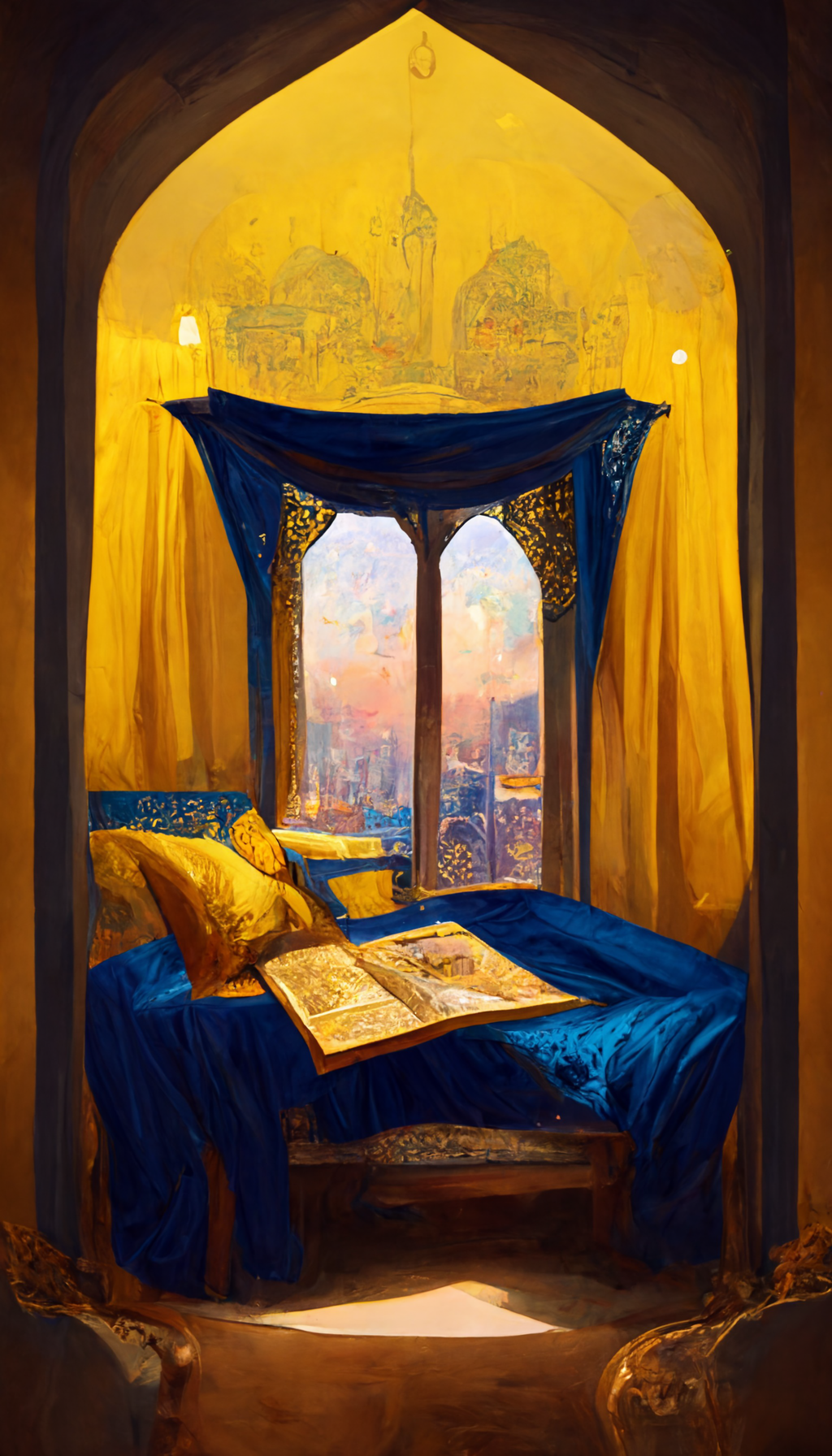 She was not the first child birthed by Asfiya. If all had gone well, she would have had three elder siblings. Nitara, the eldest, only survived until her early teens before an impossible sickness claimed her in scant days, and no magic could be worked to retrieve her.   Indali and Kairav, fraternal twins of opposite sex, came next; they were inseperable friends and beloved by the nation until their tragic disappearance on their 18th birthday.   Their bodies were recovered three months later by way of divine ritual, but their souls were forever lost. Even now, the Divine Queen offers great reward to any who can retrieve the souls of her lost children - and yet all who have tried have inevitably failed.   Whilst the other three were allowed to live peaceful, open childhoods, Chandna was different.
Wary of the fates that had befallen her other children, Asfiya kept her daughter close and trained her well. Where Nitara would have gone running around beaches for hours, Chandna's childhood was full of education and guided exploration. Where Indali and Kairav would have clambered through the city together at night, Chandna's round-the-clock guard prevented even the idea of it. And yet despite the relative captivity, Chandna flourished.

She realised her passion for the magical arts at a young age, mastering the ability to throw items around the room before she could even write, and her mother immediately took up teaching her the art of divine magic.   As she grew, this passion blossomed into a love for history and a drive to always test what could be; she often spent her allowance funding the experiments of the few friends she'd made in her schooling, or sending away for strange books from distant lands.   The stars, in particular, drew her attention - she had heard tell of attempts to study the stars and travel the depths of space, and for a whole year, this was all she would speak of outside of her royal duties.   As she aged, she was forced to learn how to balance her thirst for understanding with her necessary service to her nation. Her focus turned from the impossibilities of space to the practicalities of magic in daily life, and she began to research land-based magic to offer improvements to her nation. 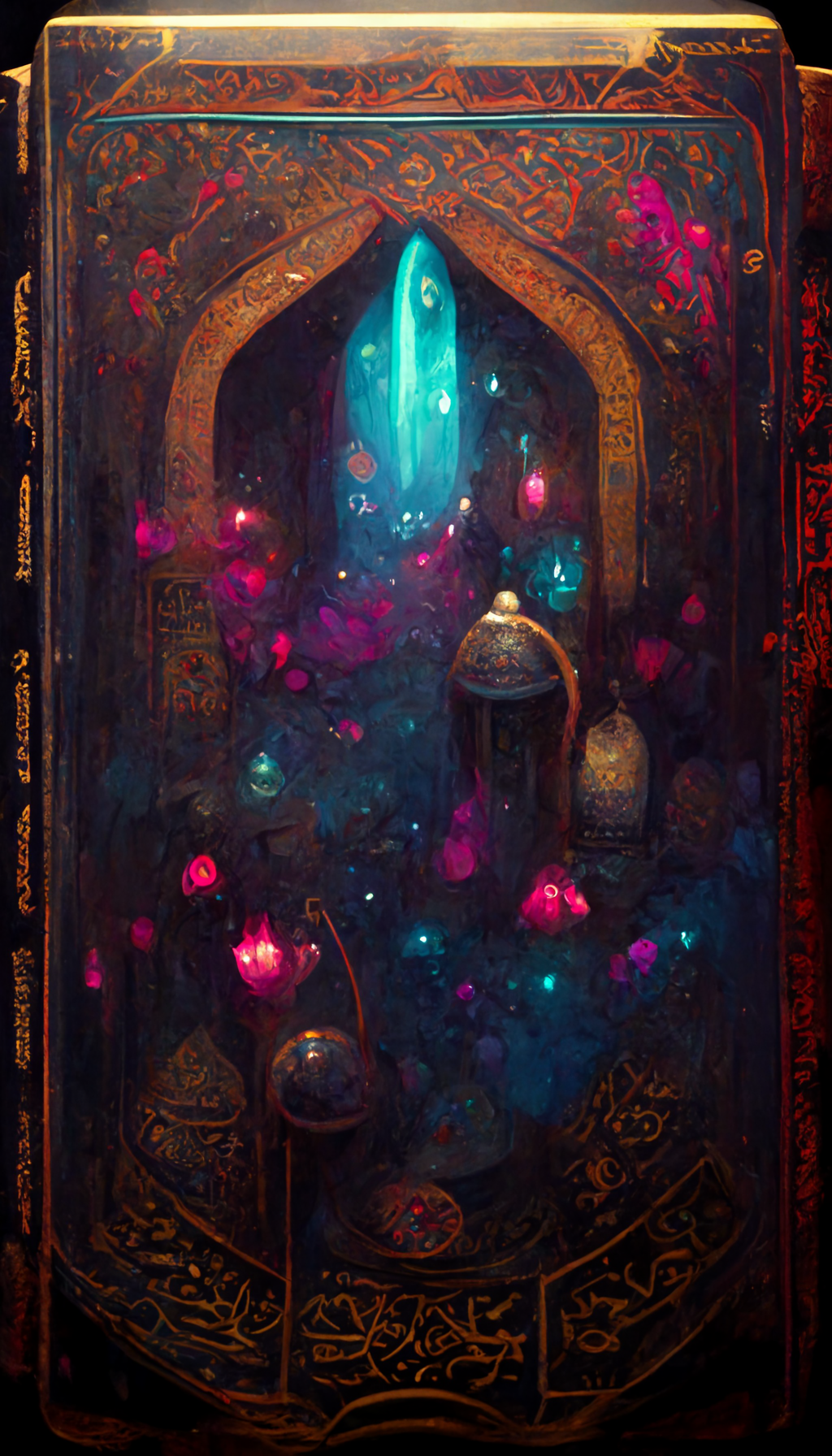 Chandna's Book by Hanhula (via Midjourney)
She came into close contact with the Circle of Harmony in this time, befriending a number of local Shiari druids and rangers, and offering their ideas to her mother's courts.   Though her time was taken up by her university studies, she would not realise the impact of her suggestions until much later - until Gaia's Lament hit, and her very suggestions were the ones now providing the nation with enough to survive the bitter months of famine.

The Holy Princess is one of the most intelligent and attentive subjects I have had the fortune of teaching - when not distracted by her own thoughts and studies.   She benefits from exercises in focus and additional free time in which to free her mind.
— one of Chandna's tutors

As someone forced to live her life largely through books and the stories of others, Chandna's curiosity and intelligence lead her to great things. She has the wisdom of someone far older, and though she does not compare to her mother, she can command a crowd with relative confidence.   She is incredibly empathetic, actively seeking out ways to improve the lives of her nation's inhabitants whilst protecting the land, but her failings come in her confidence and humility. She struggles to accept the cultlike worship her mother fosters, and often feels inadequate in her role as a royal, even when she has more than proven otherwise.

Chandna is a strongly lawful individual, so long as the laws make sense - she believes that her mother's laws are fair and just, and that law is a necessary instrument to prevent horrific abuse of both the land and its people.   However, in recent years, she has begun to see beyond the golden shimmering curtains around her as her friends and studies slowly reveal the darker side of Shiari politics.   She believes strongly, regardless of anything, that humanity (and indeed all peoples of Istralar) must continue to innovate and learn from both one another and the past to be able to continue to grow.

She's very opinionated. You just don't know the real Chandna.
— one of her friends to a politician

Chandna is not shy to make clear her general dislikes, big and small - her dislike of those seeking to game the system or abuse laws built to protect, for instance, and also her vehement dislike of avocado. Her likes and loves, she is most open with - her love for the stars, magic, and nature is known throughout the land, and both her friends and her chefs have lengthy lists of her favourite foods (and those she similarly despises).   And yet there is one deep dislike she can never bring herself to voice: her eternal feelings of inadequacy compared to her mother. When the seemingly-immortal Divine Queen is your mother and your friends pray to Her daily, life can be challenging. She longs for company that is less like this; prior to Gaia's Lament, she was regular penpals and close friends with a number of scholars abroad who helped reduce this feeling, and she hopes to one day travel for herself to experience normality. 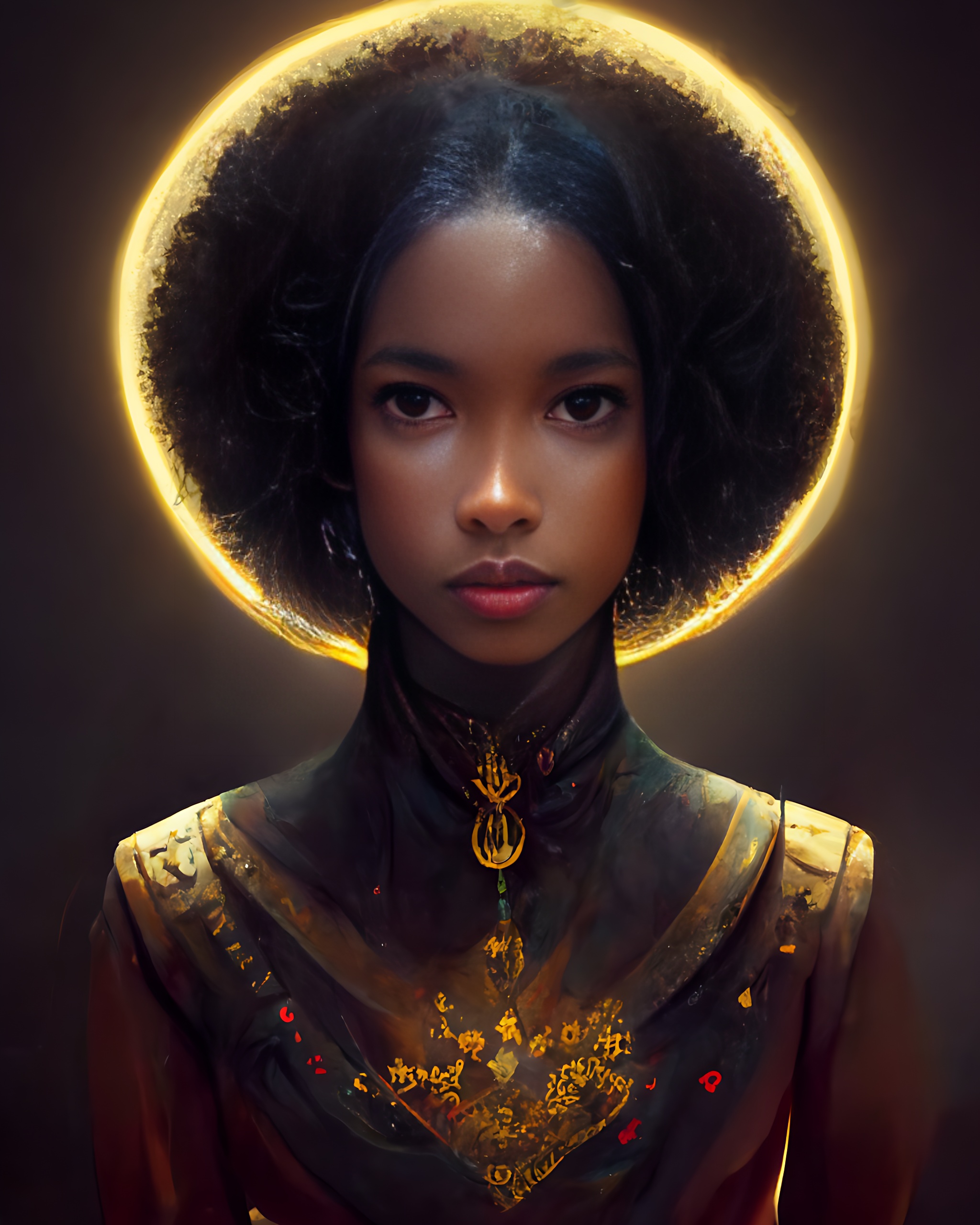 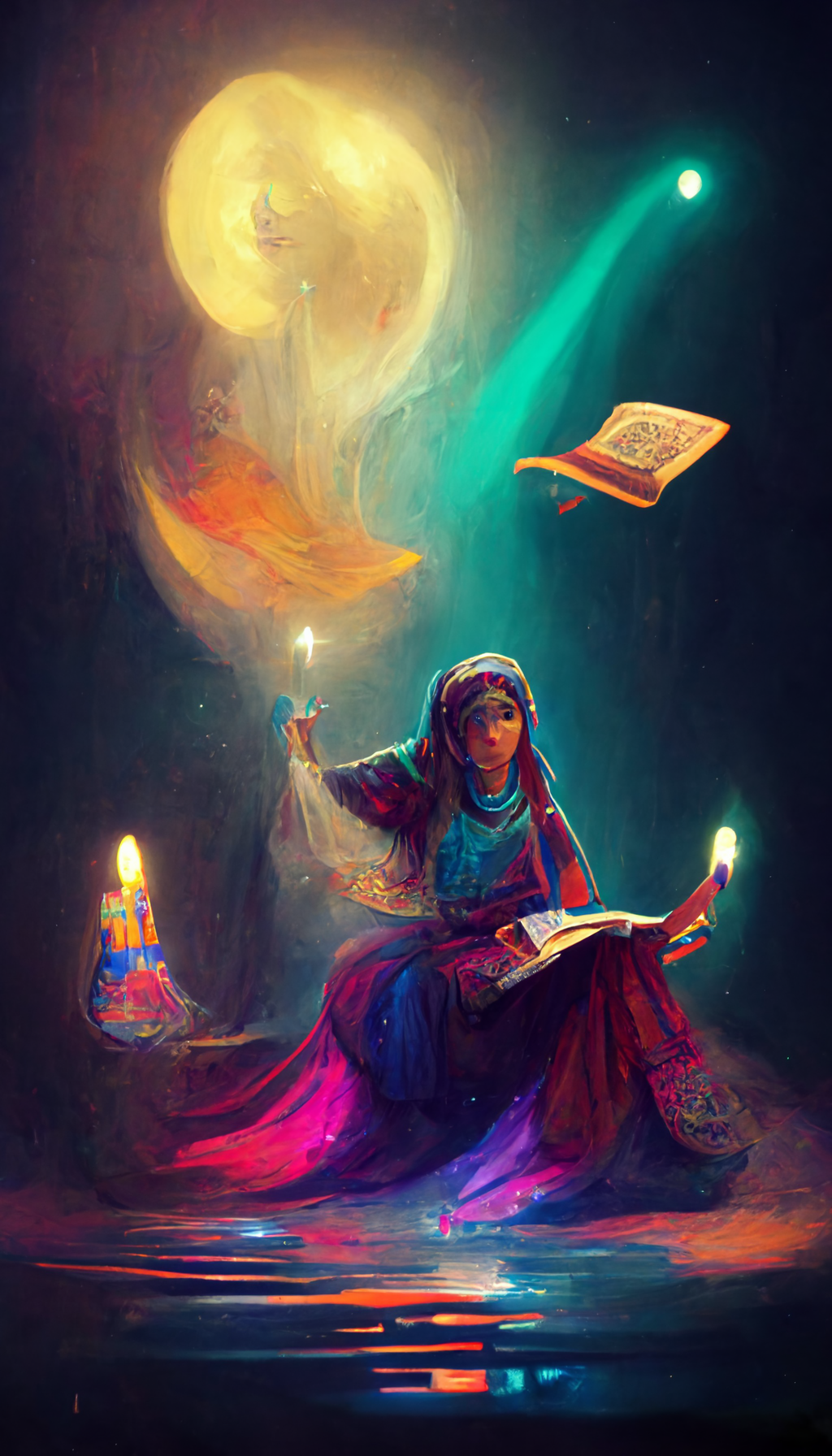 Answering: "a great leader of their people"
Visit Hanhula's Competition Page Check all other answers to this prompt Competition Homepage

She is just the kind of character that I love <3 You did a great job in presenting her :D

Wordi my love!! Go the *** ahead idm <3 I'm on holiday right now so I don't think I'll be able to tune in, but I hope the streams are fun and GL with the judging!

lol thanka thanka! It would have been great to have you there live but I totally understand. :) I appreciate the response and the permission! <3 Have a blessed and safe holiday!

Thank you for the review! I've fixed the credits on the cover (which.. I definitely typed in originally, I'm not sure why that hadn't saved) and the weirdness with the links in my global footer (which worked when I first typed them but apparently http now needs to be included).   Regarding my sidebar, I have a personal dislike for article blocks in sidebars as I find it's quite distracting - it's why I'd rather leave it blank or fill it with pictures and quotes to not distract from the text. Same for sticky sidebars; it's just not an aesthetic I like. Sometimes, the negative space helps the article, too! I often get overwhelmed with long articles that have too much in sidebars because I struggle to focus between the two sections, so I avoid it in my own work.   I'm glad you liked Chandna! Pronunciation guides are something I'd like to include in the future, but I unfortunately do not have a very good grasp over IPA. I can't even type things like CHAND-na or SHEE-ar because the way I say things is still quite different to how you would - I've an English accent, you've an American one, so it's a bit of a struggle!

Understandable and very valid points. As I've said, the sidebar thing is a pet peeve of mine and it's totally fine if you don't feel the same. Thanks for checking out the review and I'm glad it was at least a bit helpful for you. <3