To follow development and see what's planned next for the Helyk and other Kinds page, Join the Ethnis Discord!

The Helyk are a Kind of Sazashi with a brain built for the arts and a gift for Auric Metaphysics. The mind of the Helyk grants them an innate ability to convey and decipher messages through artistic form. Their chosen mediums for their messages can vary as much as their demeanor.

They are a laid-back people, especially when compared to many other Sazashi. They don't need a forceful personality, as they can let their chosen form of craft do the talking for them.

Helyk as a Kind have never held a country of their own, they have never needed one. Instead they have always left their mark, visible or not, on any land they find their home in. Their knack for the arts is unrivaled, and so for every great work of art that the Sazashi have brought to the universe, it can almost be guaranteed that a Helyk had a hand in it.

Helyk are often described as being relaxed, creative, kind-hearted, eccentric, dramatic, and manipulative. A Helyk with a forceful personality is rare, they let their chosen craft do the talking for them.

You ever you know, look at something. Like a building, or a mural, or painting, or even a Æthernet site and your mind just builds a meaning around it? A subtle anthropormization as if it was talking directly to you?   That's what a Helyk does, they speak not with their words but with their craft.

The Verin of the Ancient Haimarchy built the Helyk for an esoteric and specific purpose: to while their lives away making the Verin cities beautiful by way of stunning mosaics, intricate stonework, colossal tapestries, and other such crafts. For this task they bestowed the Helyk with great patience, a gentle demeanor, a creative mind, sharp eyes, and deft hands.

Physically, the Helyk possess angled features and a flowing white coat of fur. Their tails are long and powerful, banded black or grey from the midpoint to tip, and end in a broad fin-like brush. Helyk are naturally tall, similar in size to Shejlt-Rajh and Parisan.

They have dark-tipped tufts of fur along their arms and calves like the fetlocks of a horse. Their manes are among the longest of all Sazashi, growing thickest around their head and becoming shorter as it runs down their back before terminating halfway down their torso.

Their most outstanding facial feature is their eyes, engineered to take on a multitude of pastel tones to reflect their artistic nature. Central Heterochromia is common in Helyk, granting them a greater range of iris color combinations.

As with all Sazashi, the Helyk have been gifted claws and fangs from their Sazakraht heritage. Helyk claws are slow-growing and thick, with a durability similar to that of bone. The claws were designed to be forged into tools by the Helyk; some turn them into guitar picks, others sharpen them to use as chisels.

Similar to the Parisan, their claws are not retractable, lending their hands a more Verin-like appearance.

Their fangs derive closer to the Verin than the Sazakraht, yet they are still long enough to lend a bestial smile.

Most Helyk shape their claws to fit their craft. Their fangs are subdued but still visible to the close observer even with their mouth closed.

A Helyk's natural abilities do not come from the strength of their arm, or their wit, but rather the artistic clarity that the Ancient Haimarchy forced into their genes. Their abilities help them further their chosen craft. Combined with their native strength in Auric Meta, they can craft works that impart their intentions in unresistable ways.

A Helyk's core is in their creative pursuits, they are so honed with their craft that they can weave intrinsic messages and values into their work that impart on those that observe it. These messages can be both negative and positive.

Many Helyk specialize in delving beyond the physical bounds of their mediums, imprinting Auric Meta on their work. This effect not only appeals to the mind, but to the soul as well.

The Aen struck the match that started the unrest, but we Helyk put down enough fuel to grow it into a revolution.

The Aen struck the match that started the unrest, but we Helyk put down enough fuel to grow it into a revolution.

Despite their calm nature, they did hate their lot, especially because the Verin expressly forbade them from putting any personalization into their work unless it was in reverence to them.

The Helyk did not express their displeasure in the same openly violent ways that the other Sazashi did.Instead, they put their crafting skills to use. They took advantage of the rampant confusion, wielding their preternatural perception of art to weave subliminal anti-Haimarchy messages into their work.

Once the revolution escalated into warfare, they helped the war effort by crafting elaborate traps to snare or kill Verin soldiers and officials.

Throughout the storied history of the Sazashi, Helyk have engaged in wars that are entangled-with and hidden-by the wars of others. They call these Silent Wars, because they have been so clandestine and passive-aggressive that you'll find almost no reference to them in common historical records.

Even in the era of the Banners, Helyk play a major role in the ValuSelu Pact's cultural significance, even if they don't hold a place of their own in the Moot.

Helyk culture is a wildcard when compared to the other Sazashi. Many Helyk wander without calling any place their home, instead indulging themselves in the countless cultures of the universe to further their own chosen craft. Others may settle down, honing their skill set either with their kin or as part of a larger organization.

Some Helyk focus on their Metaphysical abilities, wielding Auric Meta to treat mental illness or deal devastating mental damage to their foes.

I shall make physical the wonders of the world.
— Helyk Akjhe

The staple of a Sazashi’s drive is their Akjhe. This underpins all other actions, pushing them to adopt values and strong stances towards those values.

At times a Helyk can care more about the sanctity of their akjhe and values rather than the reasoning of them, which leads to confrontation. By the same token, they hold high opinions of those who respect their Akjhe and enable them to fulfill it.

If a Helyk gets inspired, I'd recommend not telling them to do something else. A Helyk can't throw a punch like a Kajh, but god damn can they rip your head off with their iresome glare.

Many Helyk spend their lives stricken with wanderlust. Whether it’s wandering their town, or exploring the universe, they’re drawn to expand their craft using the advancements from other cultures. They’re loath to consider a single place home, if they have one at all.

Many Helyk are rooted to a single passion, developing their skill set or working for a single entity whether it be a government or business. These Helyk are often very specialized in a single form of work.

This Sophont is playable in Ethnis Lite! 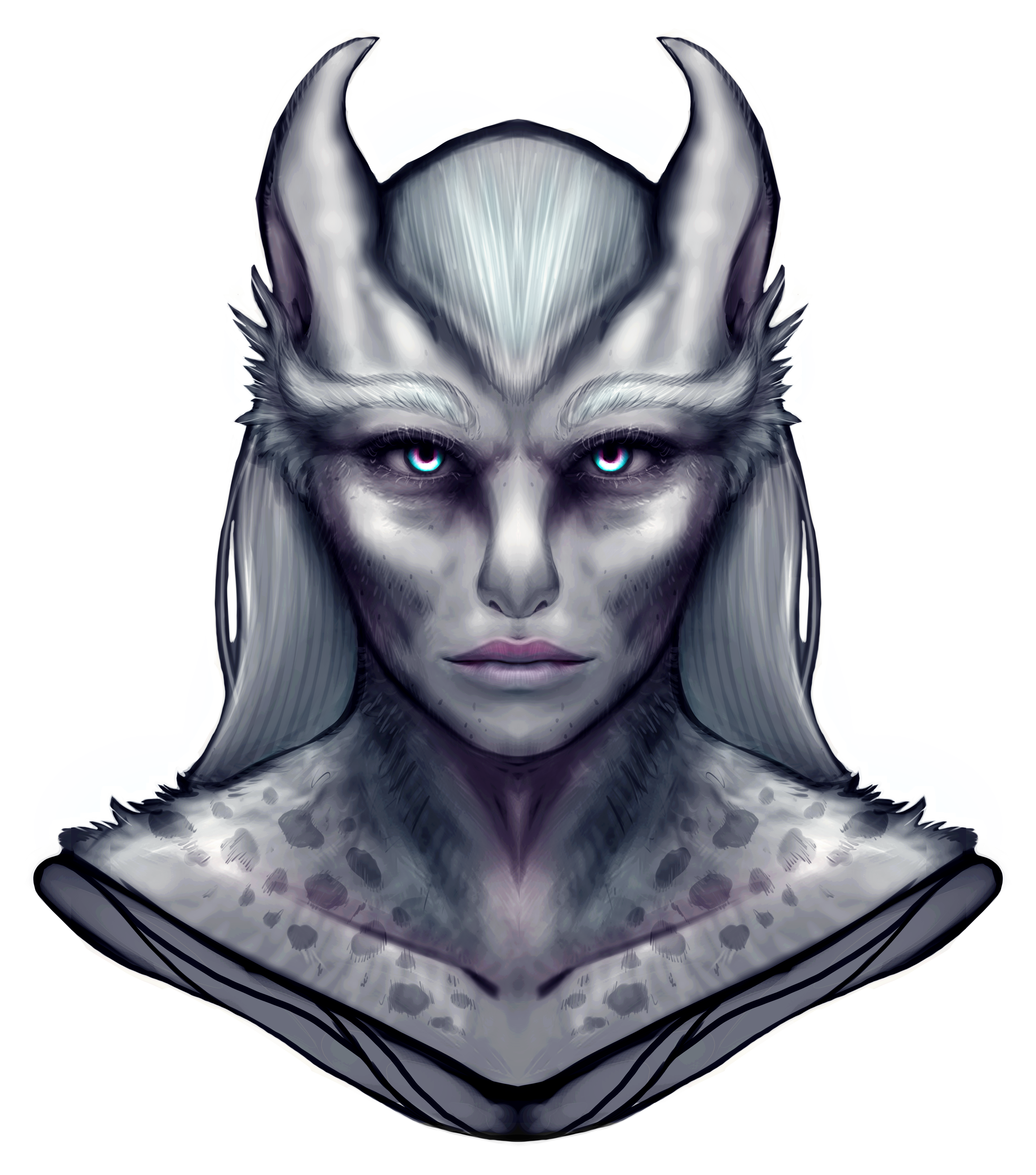 You see the universe as a melting pot of culture. There are so many experiences, all evolving from the infinite backdrops and upbringings of the Universe. You spend your time learning and pulling in as much as you can, so you can reflect it in your own creative pursuits.

You have found a culture that suits you and allows you to hone your craft to the point where you are at the top of your ability. The messages you can weave with such focus can be far more powerful than those who venture far and wide looking for deeper meaning.

You are more focused on others’ messages rather than developing your own. You have a shrewd eye for the arts and can scry hidden messages even in the most elaborate pieces. This makes you a master of defense against the sway of other Helyk, and against propaganda overall.

Playing a Helyk is a very specialist and complex role. The personality of a Helyk can be as multifaceted and eccentric as their art, but their ability to craft lures and subliminal messages is invaluable to the scheming player.

When you choose your medium, aim for something you know about or are personally interested in—your only limit is creativity!

Helyk are adaptable to the local culture, they are great guides to the do’s and don'ts of the locals.

Helyk will find ways to bring art and culture wherever they go. Have them know about local cultural hotspots or interesting locales!

Helyk are personality wild-cards, you can have snobs and socialites, wealthy and starving. Yet no matter what, their crafts matter the most.

A Helyk can bring a rich personality and eye to the campaign. Their speciality skills can round out a party nicely, especially against auric meta.

Millennial Skystrike struts through conflict, clad in glory and carbotanium. Millennial’s Raiment is his medium, and his appearance on the battlefield rallies allies and sows dread in his foes. His glorious mecha-plate armor is engraved with epics of his bloodshed and valor, so stunning as to make Parisan weep.

“And when at last I do fall, display my armor for all to see. No statue could ever compare.”

Nelkino Tor Linel Tor Jhoutai is convinced he's found the essence of justice buried in the forgotten archives of spaghetti westerns, and has hung his hat on all the symbolism contained therein. His duster and pants share the same shade of pale cream as his luxuriously kept coat. Strapped tight to his hip, a leather holster hugs an intricate ivory-handled wand.

When the Slinger draws, his foes fall under his spell, breaking rank or breaking down in tears. His art is in his style and the aura of justice that follows in his wake.

“If the grit in his eyes don’t break your spirit, his spells will. Sure as sunshine.”

The Helyk are a Kind of Sazashi who have a mind built for the arts. Their mediums can be in any form yet through any of them, they can understand and convey such powerful messages that it can help sway even the most rooted opinions. The Helyk are born with angled features and long, luxurious white fur.

[Passive] As part of a project, you can declare a value to enhance with Auric Meta.

[Passive]Upon completing a project of artistic nature, declare a value that you have and impart that value onto the completed project.

"I shall make physical the wonders of the world."