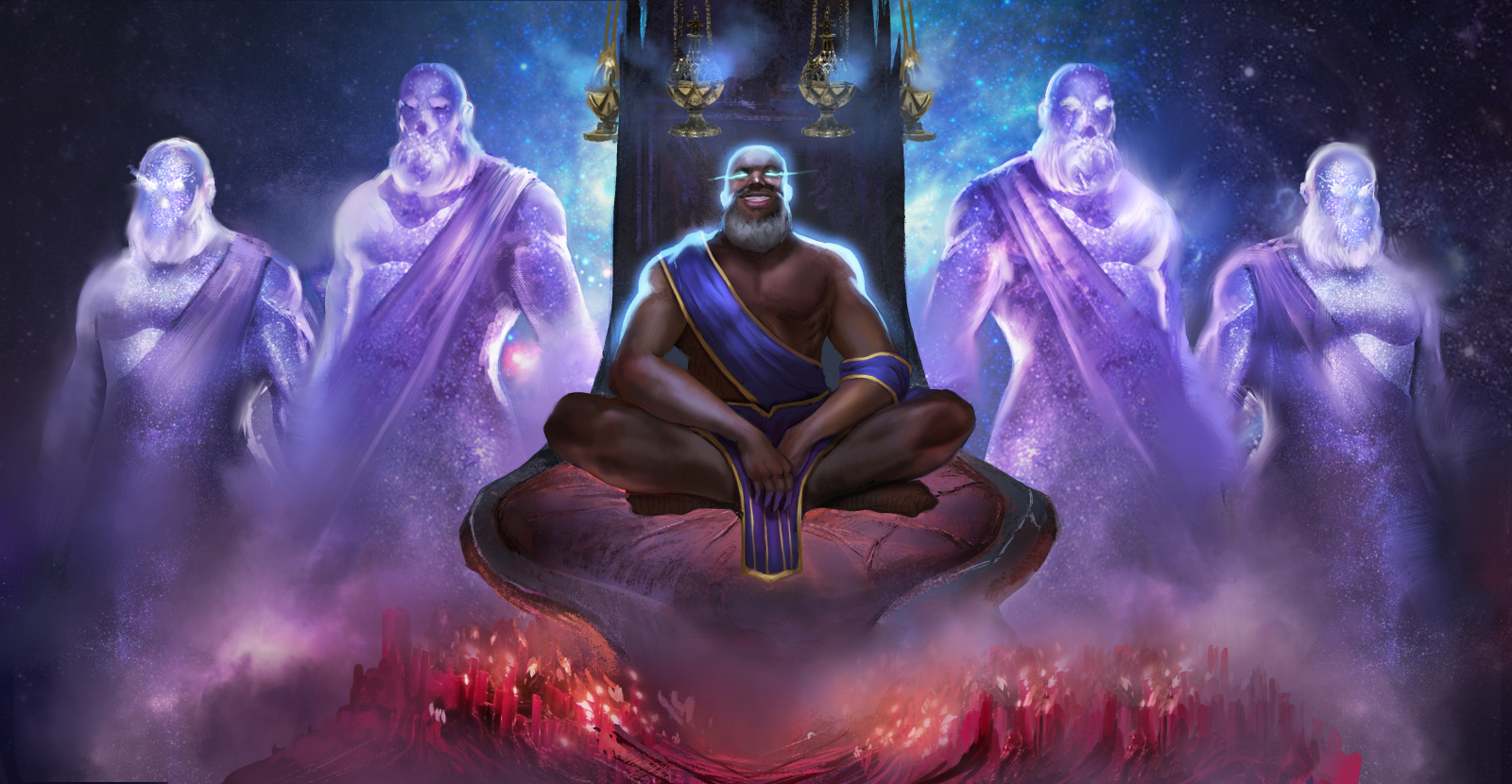 The Somnolent is locus of power within the Church of The Somnolent. He rules from Ex Cinere, the city built atop the ruins of Jerusalem.

The Somnolent was visible for miles as his Projection overlay the cross-legged figure of the Somnolent. When he spoke, we felt it as much in our minds as with our ears, if not moreso.

Behold, thus forms the Somnacy. Built by your hard work, crafted by your hand, secured by your will. All I do is in service of humanity, and all I expect is faith.

—At the Edenic declaration of freedom

Akinyele Abayomi grew up in the flooded lower deoccupied zone of Lagos, Nigeria, where he worked with the repair crews shore up the columns, piers, and levees which held up the south end of the city. It was a cosntant uphill battle, as rising sea levels had undermined the soil entirely, and sinking was common.

As part of an economic growth program put forth by the Willow Corporation many families in climate change disaster zones received scholarship grants. Akinyele's family was among those given the offer, and his parents chose him to be the one to spend the grant, as he was already the most academic of his siblings.

Driven by a desire to help his city grow past the constant ravages of climate change and the mistakes and cruelties of companies long past, Akinyele collected a degree in civil engineering and used the knowledge to help better allocate funds for Lago's restructuring while also picking up a degree in history. He was fascinated by the past of Earth, and brokenhearted about how much of Earth's culture was getting suppressed by Aempian ruel, erased, even.

Well into his 40s, with degrees under his belt, a tenure working for the University of Nigeria, and multiple renown civil engineering projects under his belt, Akinyele made the inevitable leap into politics. His local popularity as a renown humanities professor to tens of thousands of the successful businessfolk resulted in such an overwhelming following that he was soon launched into the larger social media sphere, where many were drawn to his neospiritual approch to having a whole self and living as an indivual without sacrificing the strength of your community—tenants so popular that they became the basis of many civic rehauls, which then fueled the growth of Fundamental Meritism many years after.

Unfortunately, Akinyele's anti-capitalistic messaging made him unpopular with the numerous native and alien corporate interests of Earth. His time in office was wrought with allegation after allegation, and openly vicious smear campaigns against him. None of it stuck in the long term, but the allegations were vile enough to weaken people's desire to be associated with him, and so after a few election cycles he was eventually voted out, and found no job for him back at the university.

With no job, no prospects, little support, and an open season sign painted on his back for attack from corporate thugs, Akinyele Abayomi pivoted his life. He wanted to understand his oppressors, and so decided to go to the source: Jhoutai. He converted all his credits, sold his belongings and holdings, and went to Jhoutai.

Already a moderately skillful caster, Akin was able to find work as an Auric Scrubber, a profession that afforded him a lot of time alone to listen to educational casts and to hone his Sazasharanare—especially as a human living among Sazashi in the Aempian undercities.

While being a scrubber afforded him a steady living, Akin really wanted a job working the intercontinental rail. Any role was a good role, and once he managed to snag a job as an onboard cargo hand, he was off, working port after port and able to interact with Sazashi beyond just the Aempians.

He enjoyed the time, but came to a troubled conclusion.

It is with great sorrow in my heart that I realized that the imperialism of the Vadakendanic Procession is coded directly into the Sazashi through their Akjhe. Given the power of leadership, they will always favor a division of Kinds into classes, castes, and roles. They will always favor facism.

This issue does not arise when the Sazashi are made to follow, rather than lead, but no collective would ever agree to such a loss of agency over their own identity, nor would they enfaith their safety wholly to the hands of anyone who believes that they should only be allowed to follow. Nor should they. Rebellion is the history of the Sazashi—against the Verin and against each other.

If sober minds, from all quarters and with a love for the future rather than a grudge from the past, were to convene, we could no doubt build a system which suits Sazashi, Verin, and Humanity all in peaceful manner and equal measure. I want the believe this is true, and I strive for it, but I am an ardent student of history, and history has taught me one lesson over and over again:

The Somnolent's rise was one of the contributing factors to the Bannercasting. He rose from a disenfranchised people, and claimed that the Creator had spoken to him by granting him a great power and the responsibility to guide humanity.   The intensity of his proclamations, his status as a Sovereign, and his introduction of a type of meta nobody had seen before, Projections, inspired faith, allegiance, and zealotry.
Back to Top

Above: The Somnolent greets you with a warm smile from atop his modest throne.

On either side of him, rumbling with all the power and grandeur of distant thunder, he is protected by a quartet of his Projections, each to draw mountains from the earth, or to knock them flat.

Answering: "Write about a great thinker in your world and the impact they had on society."
Visit Ademal's Competition Page Check all other answers to this prompt Competition Homepage