This Shard of Thaya is anchored to the moon's surface by Lokorn, the great balete tree on the moon. It's the site of the Sarch na Thaya, the main elven miliary base on the moon as well as the Tomb of Thaya herself.

Gateway to the Shattered Moon

Once a month, when the Shattered Moon of Thaya is full in the sky of Erathia, Telperion Skyships can make the three-day journey between worlds. Travel between the spheres is anchored by the great trees Menelost Telperion and Lokorn. The Telperion Drives of the elves hone in on the gravity of the moon generally and on the great trees specifically. Therefore all traffic from the world to the moon passes through the Barrow Shard.

Until very recently, elven skyships were the only ones able to make the trip from the world below. However, with the rise of two new moons, the elves are preparing themselves for new visitors. They are strengthening their defenses and considering reviving old alliances.

Most activity on the Barrow Shard takes place in the branches of the great balete tree. The Sarch, the main military base of Thaya's Vindicators is woven into the crown of Lokorn.

The great skyships anchor themselves to the docks along the arms of the balete as they wait for the next full moon when they can fly back to the world below.

The elves and druids make themselves at home amongst the boughs beneath the base and the docks. Dwellings, warehouses, and shops hang or grow from the branches without damaging the tree itself. Walkways, rope lines, and arcane elevators connect the disparate buildings on Lokorn.

Hex crystals from the world run out after a week or two without the Kirinal Pit to recharge them. The elves do not rely overmuch on terrestrial magitech, rationing it for when its necessary. On the moon, they rely on the old ways and their primal magic.

They have tamed the giant insects native to the nearby Swarming Shard. They fly into battle on giant dragonflies. Enormous beetles serve them as perfect beasts of burden in the canopy of the great balete tree. 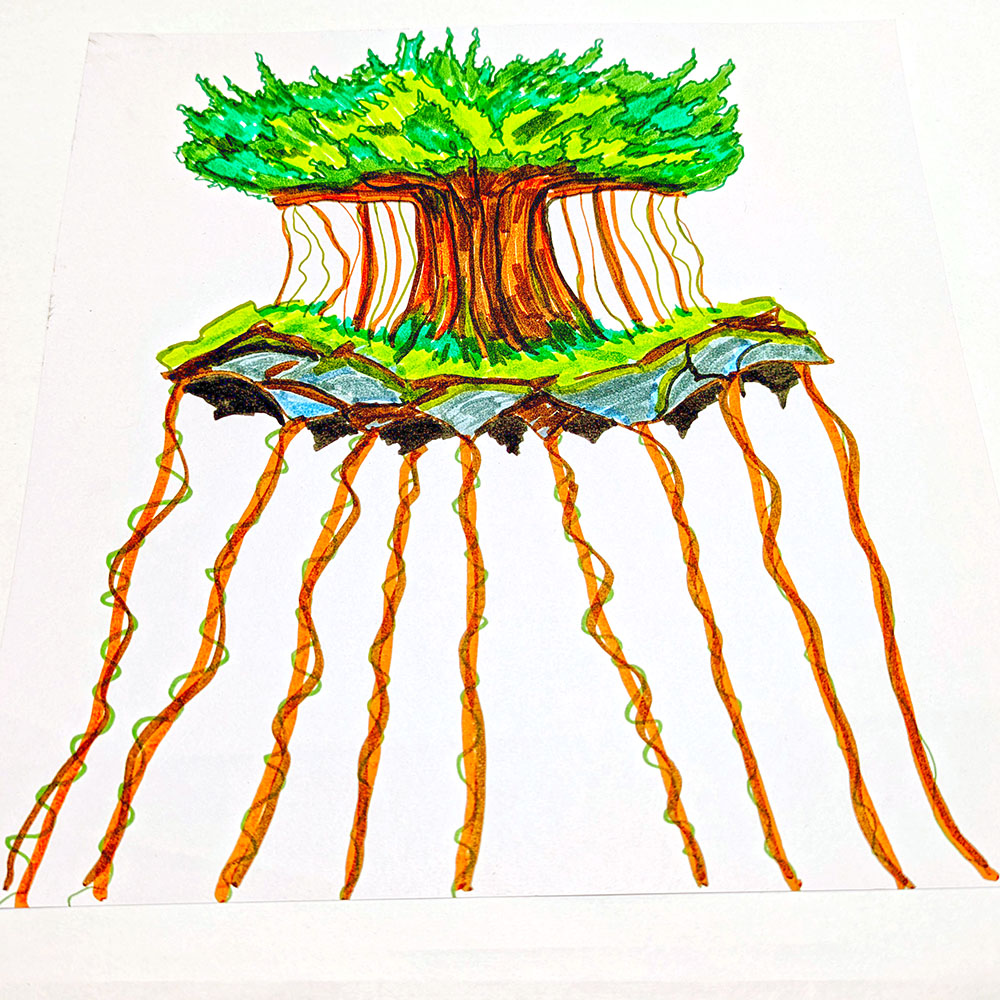 The great balete tree that completely covers the Barrow Shard used to be the corpse of the Bakunawa. It was transformed into a great tree during the Far War.

The Trunks and the Forest Floor

The massive trunk and hanging roots of Lokorn form a forest-like environment underneath the canopy of the great tree. The perpetual twilight down to the forest floor is humid and full of tropical life. A riot of phosporescent plants, unknown on the world below, fills the shadows with dim lights. Familiar animals: great cats, wild hogs, and colorful birds; mix with giant insects and aberrant monstrosities from the Far Realm.

Grave of a Moon Goddess

The Tomb of Thaya lies at the base of the main trunk of Lokorn. A mithril statue of the goddess Thaya's elven aspect stands above the tomb with a seedling of Telperion itself growing next to it. Her immense divine corpus lies beneath a ritual room within the crypt itself. This was the site of the Ritual of Lunar Apotheosis that raised the Silversong Moon and gave birth to Thaya's lost sibling as the new moon goddess Jenevieve.

The roots of Lokorn break through the bottom of the Barrow Shard, anchoring the shard to the lifeless moon below. This area of perpetual darkness is the home to an unknown number of vampires and undead. These representatives of the Blood Moon Covenant are allowed to remain in peace so long as they do not feed on the citizens of the Shard. To date, it appears as if the vampires have kept to their part of the agreement.

Lokorn is an immense balete tree on the Shattered Moon. It anchors the Barrow Shard to the surface of the moon.

The elven military city is named after and built around the tomb of the goddess Thaya. It stands on the Barrow Shard of the Shattered Moon.

The beautiful Tomb of Thaya marks the final resting spot of the goddess Thaya. It is carved from white marble with a living silver tree growing from the top of it. It is one of the holiest sites of the Church of the Sun & Moon.

So with crystals running out of energy, that means any attacking force will only have limited time to win before they start running out of their supplies, right? Sounds like invasion would be hard.