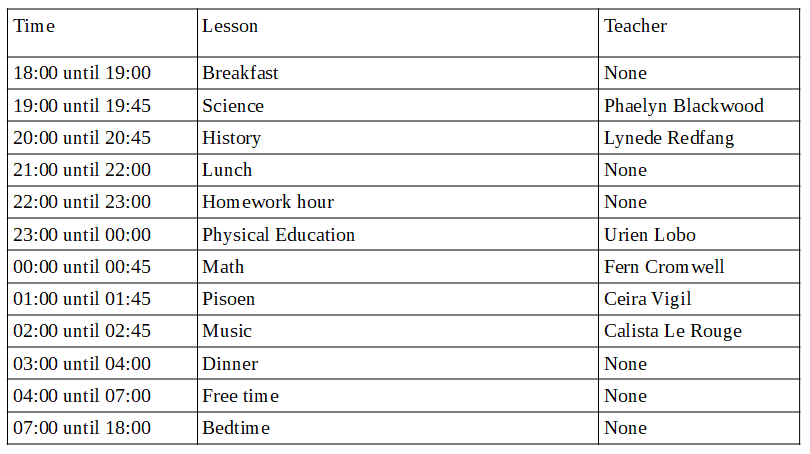 The lessons are every day the same, and at the same time. If there is a change it will be announced by the Professors or by the Headmaster Vance Dracul.

In science the students are studying the concept of bending nature to one's will. This is during group studies and experiments. The Science lab is near the cafeteria, next to the library.

During Physical Education, the students take part in sports like basketball or soccer. This class is new and students are graded on how well they behave during the lessons. The gym lies behind the old mansion.

During this lesson, students need to solve advance calculus, that sometimes often look impossible without a calculator. The door to the classroom is in the library.

During this lesson, students learn to decipher this dead language, which not has been used since the First war. The door is on the opposite side of the library from the math class.

During music class, students learn to read musical notation, playing instruments, and how to sing. The music classroom is on the second floor in the old mansion

The students are free to use this hour to do some homework. They can do this in their dorm room or in the library. It is also the time to study before a test or sit back and relax. If needed the Student Council uses this hour to have their meeting.

The students have this time to participate in the various clubs, do their homework or hang out with friends.

She is part of the noble Blackwood Family. She doesn't like Science, but loves cooking. So this lesson came close enough. Among the student she is famous for her dark chocolate brownies with bloodberry jam.

Like every member of the noble Redfang Family, Lynede is passioned about history, She hopes to past some of that passion on to her students. She is always willing to help where ever she can.

The students do not know this strange teacher very well, this is because he doesn't come from Traimora but form the Mantorboran Empire. Because of this he has trouble with speaking, fumbling between the common tong and Prisian.

He or they, love difficult advance calculus. But they are willing to take as much time as needed to explain it to students who are struggling with it.

She was in the past he, it is because of her that the Red Tempest Academy has become so open-minded. When a student comes out as trans, it is most often her that chaperons the students.

As a former singer, she sees it as an obligation to pass on her knowledge of the subject. She doesn't care if the students don't share her passion. She simply ignores it and goes on with her lesson.

Chef of the Red Tempest Cafeteria, not one dish is strange to her. She is also concerned about a student if she doesn't see him or her eating in the cafeteria.

As Headmaster he has a lot on his plate. Not only the care of his 223 students but also of his daughter Nadia.

The Liberian of the Red Tempest Academy does nothing more than keeping the library clean. He really loves his job and he is popular among the students.

He is the doctor of the Academy, he studied medicine under Jorin Barnier. But he really loves the simple cases like Food poisoning or headaches.