Though well into its fourth era, the continent of Thea is still teeming with bountiful wealth and potential. Large stretches of untamed land occupy the continents interior, while many robust and thriving kingdoms dot the coastline. This is a place of great danger and peril, but also one of great beauty for those willing to go and find it.

Originally home to the orcs, fledgling kingdoms for the elves, dwarves and humans were established during the first age, following the event of the First Migration. Subsequent waves of immigration would bring populations of halflings, gnomes, and a myriad of other races from the old world. The last of the great migrations, that of the draconic races, was the catalyst for the Dragon Wars and the end to the Second Era. Though there has been no more immigrations from the old world have reached the shores of Thea, though groups of exotic races, such as the Tabaxi and Kenku, have trickled in from the east.

The interior of The is populated by high and harsh mountain ranges, interspersed with untouched forests. The foothills of these great peaks slowly blend into the rolling hills and plains that house most of the continents population centers, until they reach the ocean.

The vast majority of the natural life on Thea is mostly harmless, though the magical nature of the land has given way to more than one monstrosity haunting the countryside.

Great stretches of forest cover much of the continent, most of those being locked away behind mountains rich in mineral wealth. Esspecially large deposits of copper, iron, gold and silver have been found and exploited by The Federation of Dwarven Underkingdoms. The kingdoms of The Neldë Mardi have established themselves near particularly pure sources of the rare magical mineral ogarine. 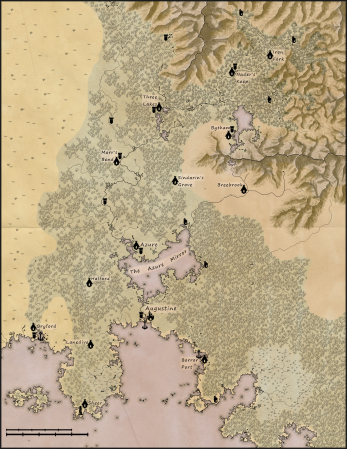 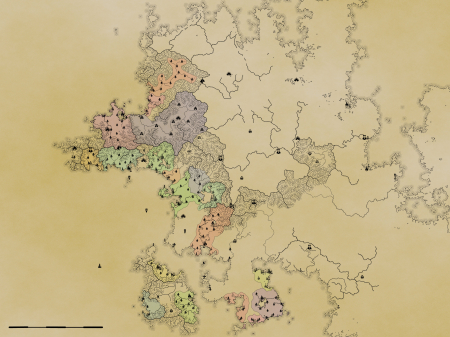 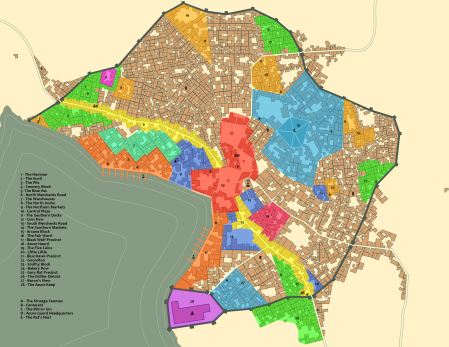 Wow, that is a hell of a map! For aome reason I liked the word "underkingdom". I may read more about it later.   Keep the good job: )