While the out edges of any world is guaranteed to be strange Araborea takes the cake with its out rim. At the edges of Araborea the land and the creatures are warped and twisted from the strange effect of The Darkness . The creatures on the edge of Araborea are so strange that they are almost unimaginable. Some of them are terrifying and some are just plain weird but this area is by far the most dangerous part of Araborea. People who spend even a few days there slowly get warped into horrible forms.

This place is a cartographer's worst nightmare.
— Elden Yetral, head of Araborean exploration

The geography of the rim is ever-changing. Mountains come and go in but weeks, rivers change direction at random, and fungus forests migrate across the landscape. Thrown in among the shifting landscape are the ruins of cities and temples of the age before The Fall. The only permanent features of The Outside are The Obelisks, these six monolithic structures are evenly spaced around the rim. What they did and who made them is a mystery, but they radiate powerful magic.

The edges of Araborea go through a series of strange seasons. These seasons can last for as long as a decade or be as short as a year, but they will always go in the same order.

The rim blooms with fungal life. During this time creatures from The Shining Caves sometimes emerge onto the surface to procreate. The most geographic change occurs during the bursting and The Obelisks glow a greenish-blue.

Fungal life dies off and the ground becomes oily and hard. Most creatures retreat underground and temperatures drop. During this time powerful electric storms ravage the land and the ground off-gasses poisonous fumes. In the bending, The Obelisks glow a dim purple.

The Obelisks shim an angry red as the Outer Rim mutates into a living mass of chitin and flesh. Pond-sized pores sweat green goo and self-cannibalizing orifices dot the landscape. As the bleeding progresses scars and cracks form in this monstrous meat glacier. These fissures bleed away the tissue around them until all that is left is a rocky wasteland, rime for a new Bursting.

During the bursting, the flora and fauna of the Rim are similar to the life in other parts of Araborea. However, the nightmare powers of the Darkness twist these creatures into even more terrible versions of themselves. During the other seasons, life is very rare on the rim. 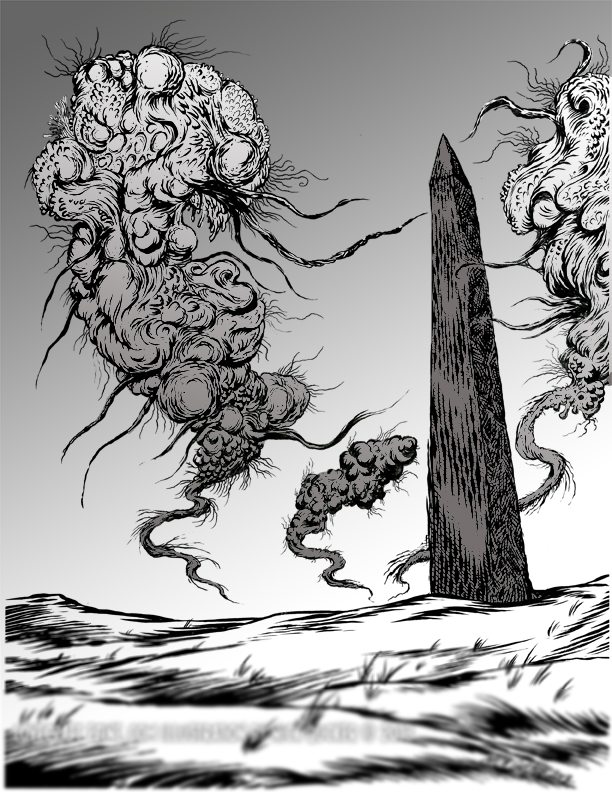 by Nick Gucker
Alternative Name(s)
The Outer Rim, Far Out and Over, The Outside
Location under
Araborea
Contested By
Inhabiting Species
Related Professions

Remove these ads. Join the Worldbuilders Guild
Formations of Araborea