The Cauterizer of Northriver, The Zealot of Navara, The Divine Legate, Saint Kairoz Half-Elven, The Andorian

I am blessed with divine might by Agusten himself; it is my duty to purge the corrupt, the wicked and the evil; it is my right to force the heretical out of the shadows, into cleansing fire.
— Kairoz Half-Elven, the Enlightened, on his Inquisitorial Ordainment.

Kairoz Half-Elven is a Saint of the Andorian Church, the former High Inquisitor of Navara and the founding father of the Kadian Dominion. He is the only Andorian Saint to be canonized while still living, thus he was titled 'The Andorian' until a name would be picked for him postmortem.

The most striking feature of Kairoz are his tattoos.
The second verse of the First Dogma is tattooed on his face, with the third passage being the most prominent.
His right palm has a myriad of them, each symbolyzing a quality of Kairoz; this follows conventions of Navaran criminal society. His left hand is tattooed with his most defining events; the wrist has six black stripes (years spent in Agorak), crossed by six white lines (years living as a free man); his entire forearm and palm is completely dark-red (The Culling of Northriver).

Kairoz was born in the city of Navara, in a brothel called The Rozzet, to an elven mother. His mother was a courtesan and his father was one of her patrons, who impregnated her by mistake. Neither of them knew, nor cared, about his identity.   He was abandoned by her around the age of seven, and from then on grew up on the streets as a common street urchin, hoping to end the day without begging for food. While not prone to violence, he would often steal or cheat.

While living on the streets, Kairoz made two good friends: Ixil, and Nair, the trio were roughly the same and clicked almost immediately. Ixil, a Dwarf who somehow always manged to stay fat, was a street rat of some Undercity big-shot. At least according to what he told the group. Nair, a Tiefling, was too smart for his own good. His daring plans usually included the risk of certain death but were almost always executed without a hitch, providing food and coin when needed.   kairoz himself found a strange liking to religious sermons spread by the Andorian Church, finding them meditative and resolving. He began to hang around the church of Northriver, sometimes even going to see the sermons and rituals in the central Church of Navara.   Ixil gave Kairoz his name; 'Kai' is "king" in Dwarvish and 'roz', short for Rozzet. Since his mother never bothered to call him anything other than "son", the name quickly stuck. Kairoz never tries to hide its origin, but people rarely ask.   In 1164, Ixil almost died of dysentery, but made it through. Few months later Nair, decided to leave for one of the Free Cities after receiving a promising lead from one of his contacts, he never contacted Kairoz again. That very same year, after talking back to a city guard on patrol in, Kairoz was falsely accused of assault. He was sent to Agorak Prison for 6 years.

In the labor camp of Agorak Kairoz dreaded the frigid winter. The valley would freeze almost completely and everything that wasn't essential would often be used as fuel for fires. According to the place's tradition, each winter Kairoz tattooed a black stripe around his wrist. During his time in prison, Kairoz have read the teachings of the Andorian Church. As his freedom grew closer he began to see the truth, every sermon, every passage, every glorious sunrise, all called him to bask in Agustin's radiance and sanctity.   As soon as he was able, and with the help of the jail's pastor, he joined the ranks of the Andorian Church's Inquisition.
Kairoz later named his horse Ixil, after his old friend, as a joke.

After a couple of years as a Venator Impius, he became a "Tiro Inquisitor" under an ordained inquisitor, honing his senses and learning much; Since he was yet unordained, he served as the inquisition's eyes and ears, and occasionally its fists.

Kairoz was regarded as a capable and relentless inquisitor and high inquisitor, acting with zeal but never without thought. Prior to his major role in the dissolution of the Second Empire of Ader he published a treatise regarding the proper function of the inquisition; this treatise, Ferrus Manus Contra Haereticus (Strike Against Heresy, lit. "Hands of Iron Against the Heretical"), serves as the standard procedure of action for inquisitors.

The Zealot of Navara

See The Great Kadian Split, War of the Cleric.

I had no interest in the fey for most of my life, even though I am, supposedly, their descendant. However, I had an incident in which I misidentified a ritualistic summoning of a fey for a ritualistic summoning of a demon; the presence of cold iron as a precaution threw me off. The summoners, while knowingly breaking the law, claimed had no ill intent; I was not convinced, and summarily executed the pair. Weeks later, it became clear that they were speaking the truth. I cannot bring them back to life, but I could learn of the fey, so that such an event wouldn't occur again.

The Cautrizing of Northriver was a key event in Kairoz's life. He tattooed his left palm and forearm completely red, citing that he is unable to wash his hand off of the blood of the district's denizens; he suffered from recurring nightmares of the atrocities he had to commit, and would reportedly pray for an additional hour each day for the souls of the innocent. In the months following the event he became disturbingly distant and remorseless, and he became prone to outbursts of anger, often lashing out at his advisors and family; this state of mind was evident in the cruel and pronolnged death of Areyus Verhill. With the birth of Idari and Reseah, however, he slowly realized that he cannot continue in this manner, and opened up to his wife. While not completely relieved, he regained his previous composure and mannerisms; in one entry in her journal, Invyre remarks that "...the nightmares never left him. I pray that in his current state they did".

"I'd argue that an inquistor must know at least four language to be reasonably efficient; knowing me as you do, I know twice that."   "Eight?! How did you manage that?!"   "Well, I have two mother tongues: the common language and elvish. As an urchin, I picked up thieves' cant and as a cadet of the venatores perdita I have learned the Abyssal and Infernal tongues. This headband,"   Kairoz briefly removed his cowl, revealing a neatly shaven head adorned with a golden circlet with ruby gems, then quickly pulled it on again   ",allowed me to learn Draconic in a matter of months, consequently foiling a ritual whose purpose was to bridge our world into another. In this enlightenment I was reborn, and thus renamed myself Kairoz the Enlightened
As I said, an inquisitor can never know too much, and learning Undercommon pays off, as it is spoken by many racketeers, black market traders, and other unkindly folk that hold invaluable information. More often than not they willingly sell it to you; other times, it can be... persuaded... out of them" 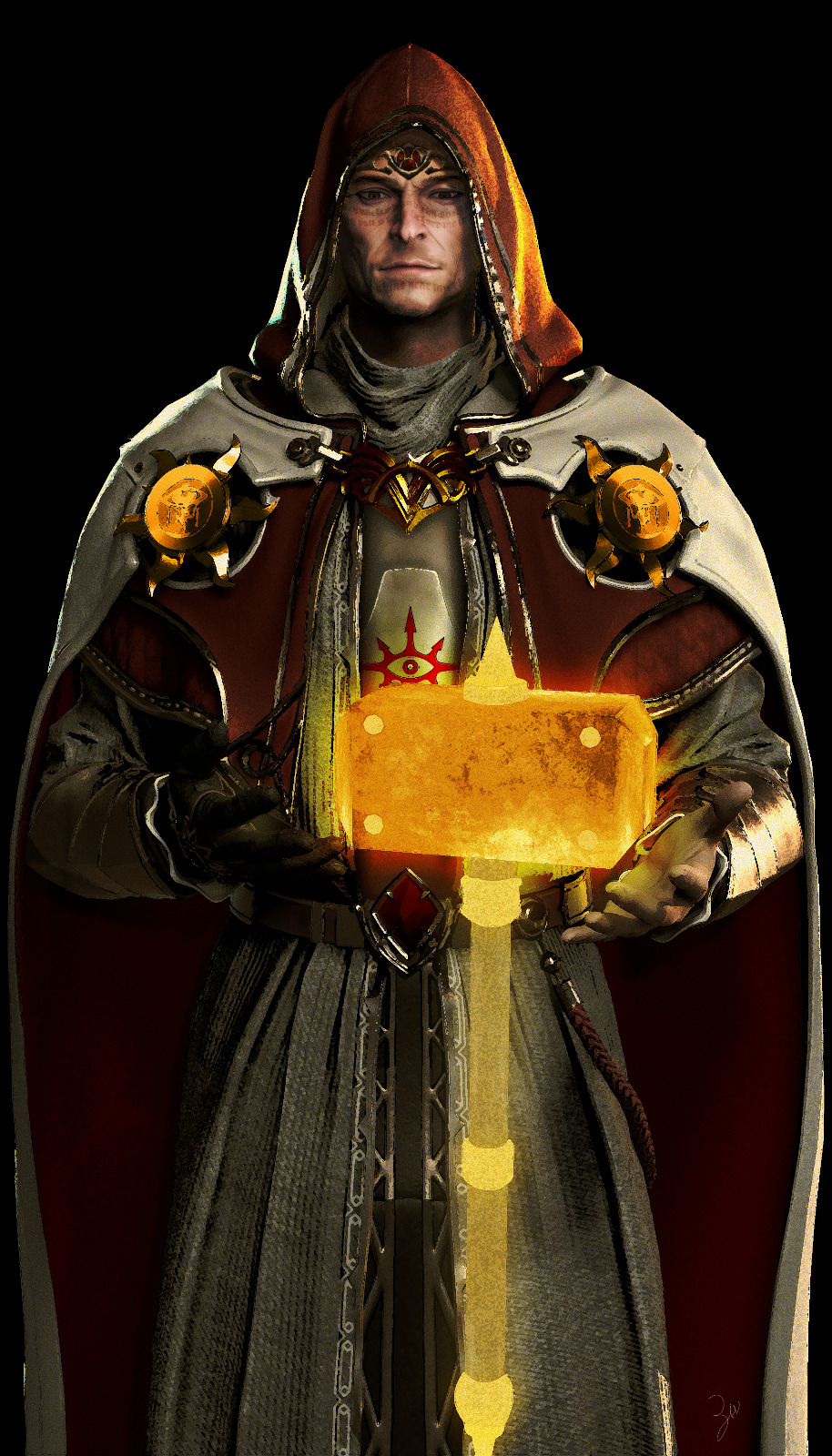 View Character Profile
Known For
Authoring of the Hereticum Percute.
Leading 1205's War of the Cleric
Causing The Great Kadian Split.
Spiritual ruler of the Kadian Dominion.
Founder of the Andoriani dynasty.
By some traditions of the Andorian Church, the true successor of Agustin Andor.
Current Status
Crystalized since 1207
Current Location
Andorian Cathedral
Species
Half Elf
Conditions
Ethnicity
Navaran
Other Ethnicities/Cultures
Currently Held Titles
Previously Held Ranks & Titles
Date of Birth
15th of Father's Gaze
Year of Birth
1144 AC 428 Years old
Circumstances of Birth
Unexpected pregnancy, father unknown
Birthplace
Navara
Family
House Andoriani
Spouses
Siblings
Children
Quotes & Catchphrases
● "It is not innocence that differs one from lawlessness, but adherence. Your innocence proves nothing."
- during trial and prior execution of cult leader's brother-in-law.   ● "In nomine populo urbis Navara et authorita dei quattuor; Ego depose tu, meus rex." ("in the name of the people of the city of Navra and the authority of The Four; I am deposing you, my king.")
- to Tobias Malion after the Culling of Northriver, declaring his The Usurpation of Navara.
Aligned Organization
Andorian Church
Other Affiliations
Related Myths