I dreamt of a world without endless wars. I dreamt of travels and encounters. I dreamt of sharing, and people helping one another.   The wise heard our words, brutes faced our strength. By Giraun's grace, we pacified and unified Menicea for the first time in History.
- Nelandra Aigleran
The Nelandrean Cult, or Nelandreism is a religion born two centuries ago, based on Nelandra Aigleran's life and values. It is the only official form of worship on Menicea and among Gérouns.

Followers of the cult devote their lives to peace, growing and protecting the Menicean culture, and seeking happiness. Nelandreism has few rituals; weekly prayers in front of an altar, usually done in small groups led by Doves.   Festivals and parties are the true heart of the cult. Its members are taught to enjoy getting to know members of their communities and to enjoy living together. Mornings are for the family, work time is filled with songs, and evenings are spent playing games with friends and neighbors at taverns.

Almighty God of creation, nature, and fate, Giraun was and will always be the first. Storms remind us of his strength, spring breezes of his grace, and he gave us Nelandra to remind us of his unconditional love.   Through or prayers and offerings, we acknowledge his might and appease his wrath.
Menicean roots, Kelyeran Asturac
Giraun used to be the only god Gérouns believed in until Nelandra came along. Books and prayers often describe him as an elusive presence who shaped the world and now watches it unfold from afar.   Nowadays, his worship is done through prayers to Nelandra, who is believed to take them to Giraun. It is ultimately the first god who decides whether to grant them or not. Seasonal festivals and offerings of food to nature are the only direct way of worshipping Giraun. Despite having to share Gérouns' hearts with Nelandra, he is still the most respected god of all.   Learn more about Giraunism

Brought to us by the whims of fate, Nelandra was the first Géroun to be blessed by Giraun. Goddess of peace, ambition, and success, she is the model we should always follow. Her body rests, but her spirit is still among us.   Should she be forgotten, we would inevitably fall back into an age of eternal wars.
Menicean roots, Kelyeran Asturac
Nelandra Aigleran is the core of Nelandreism. She once was a mortal who managed to put an end to the neverending Clan Wars. Her whole life and values inspired the cult as she was deified shortly before her death.   Her statues, the Nelandrean Altars, dot every hamlet on Menicea as they are gathering locations for weekly prayers. Gérouns believe that she is the one hearing their prayers and handing them over to Giraun. There is not a soul living on Menicea that doesn't know who she is.   Learn more about Nelandra

While Nelandra was chosen to sit next to Giraun, Kelyeran was chosen to stay. Blessed with immortality by Giraun, he helped us get back on our feet after the end of the Clan War and made sure we grew united.   Our prophet, God of wisdom, protection, and travels, intervenes in case of need to keep us out of harm's way.
Kelyeran is the second mortal Géroun known to have ascended to divinity. He used to serve in the Nelandran army as Nelandra's primary strategist. When he stopped aging at 53, he devoted his neverending life to building the new Menicean society. He is the one behind most of the founding tools Gérouns know today, such as the Menicean Calendar.   Still, he avoids interfering too much with mortals' life and decisions. He only intervenes if the cult is disrespected or during crises, such as the first contact with humans.   Learn more about Kelyeran

Mylandron was the sword of the Nelandrean army. His kindness and care for his fellow soldiers were an inspiration to all. He always spared those who yielded, and mourned those who fell alongside him on the battlefield.   His spirit went with Nelandra next to Giraun. There, he became the God of laws, community, and strength.
Mylandron is the most mysterious member of the pantheon. He was also a mortal that served in the Nelandrean army during the Clan Wars, but many things about him got lost in History like his last name. What remained was his charming personality and the rumor that he might be the father to the royal family.   He was also deified by the people around the year 10, after his passing. Worshippers offered him prayers and offerings to protect their families and loved ones, which later stayed as his domains within the pantheon.   Learn more about Mylandron

The Clergy is a vast network working directly with the people. The Doves, citizens who were taught to read and write, are spread throughout the whole continent. Even the smallest hamlet has one to take care of children's education and to maintain the Nelandrean Altars.   Every five years, all the Clergy reunites at the Peace Palace, the headquarters of the cult. There, they discuss the future of Nelandreism and take their directives from the hierarchy.   Learn more about the Clergy, its hierarchy, and how to become Dove.

Nelandreists worship their gods through prayers, in groups or alone, and through festivals.   The most common prayer is the "Glen Vinnien," which is usually recited many times a week by Doves at Nelandrean altars. The very least one can do to be a good Nelandreist is to participate in one of those recitals once a week.

There are two types of marriage in Nelandreism.   Unions are for couples that wish to take one step further into committing to their partners. They have no conception of eternity, as people are encouraged to break up if they are unhappy.   Bondings are for couples wishing to have children, as having them without being married is highly disapproved. Parents are only allowed to separate once their children come out of age at 14.   Learn more about marriages and their ceremonies

Each year, from the 17th of the fourth month to the 27th, the Great Nelandrean Market opens up in the capital.   As an essential part of the Menicean culture, this gathering raised many problems as years and decades went by. Its organization is a baffling and costly process, demanding more and more resources and escorts as the population grows, and criminality increases.     Learn more about the Great Nelandrean Market

Calls to Elements are ceremonies held twice a year when seasons change. Mostly found in the countryside, they are festivals revolving around music and offerings to nature. Calls are the only remains of Giraunism's old ways of worship within Nelandreism.   Learn more about Calls to Elements

Every now and then, Nelandreists write their wishes on a small piece of paper that they tie on their wish-holders, hoping they will be granted. Wishholders come in many forms: small and individual ones, or larger and shared ones.   Peeking into someone's wishes can tell a lot about their personality. However, it is profoundly rude to do so without being invited to.   Wish-holders

Nelandrean Altars are everywhere. Sometimes made out of stone, wood, or even marble, they dot every settlement on the continent. These statues of Nelandra are where Nelandreists come to pray. Every altar has at least one Dove taking care of it.   Each year, many pilgrims travel around the continent to deliver Nélandrée seeds, a flower every altar must-have to be authentic.   Learn more about Nelandrean Altars

Most Gérouns living in the countryside don't store their unimportant goods in their houses, which are usually too small for that. Hamlets have common houses where each household has a little space to store the things they don't want home.   These houses are also shelters for poor travelers who cannot afford to stay at inns every day. Homeless gérouns are also welcomed to sleep there during the cold or stormy nights. Some houses even have small kitchens for travelers to cook. In exchange, people are expected to clean the building in return.   Since beds are provided and cleaned or free, it is extremely rude to stay there if you have the means to sleep at inns. Not only will people be given mean looks, but their supplying might also be denied.
Founding Date
20
Alternative Names
Nelandreism
Demonym
Nelandreists
Leader
Kelyeran Asturac
Location
Nelandra (Capital)
Related Items
Pious those who live their lives at their fullest.
Grateful those who were blessed by fate.
Honorable those who shaped their future themselves.
- Nelandra Aigleran

Nélandrées, the eternal flowers, emblem of the Cult.

Love those who are the closest to you. Have parties, sing, drink, eat to your heart's content.
But remember. Remember what we sacrificed so you could live your life.
- Nelandra Aigleran 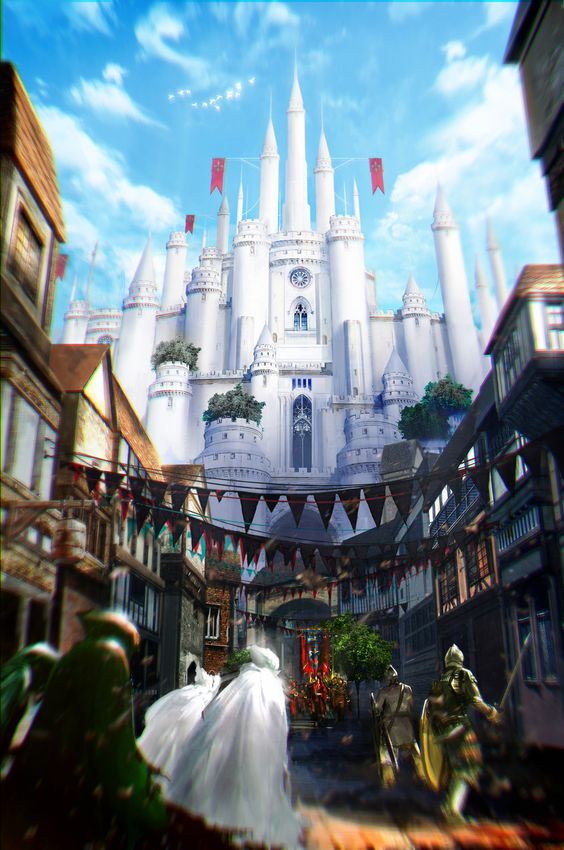 by Oh kyung rok
The White Castle, home to the Royal Family and headquarters of the cult.

We will gather. Every year, a festival will be held in the capital to remind us of the bond we share as Meniceans. Each town should bring their wares, specialties for others to discover.   Our beautiful white city will be painted with the colors of every menicean region.
- Nelandra Aigleran 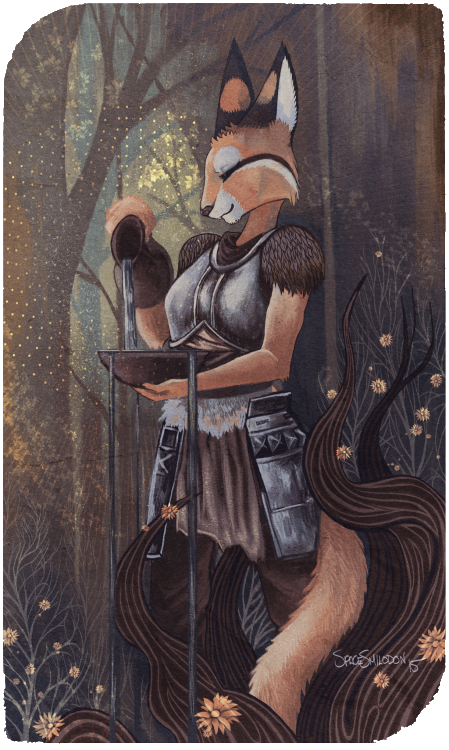 A lush pilgrimage site in the Great Forest.


Their eyes lurk in every corner of the land. Their ears catch even the faintest whisper. That is the real purpose of the doves. This is no freedom; their faith is like the grasp of a parent who can't let go of their child.
- Conversation between a Morknar and a Human 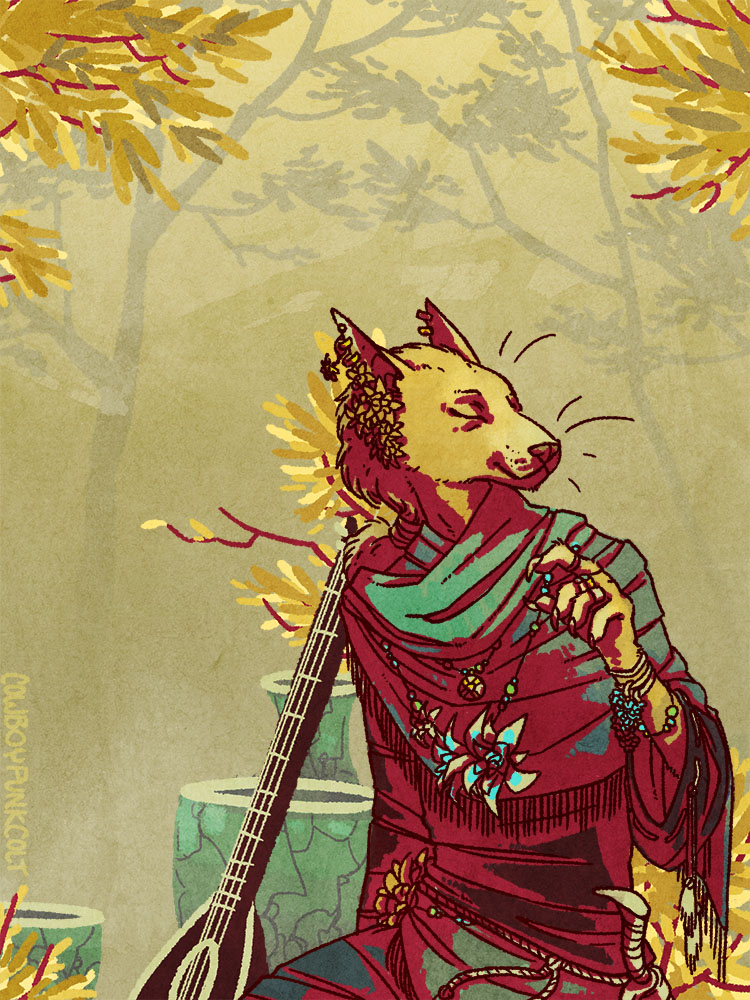 Always great to see some menicean lore coming to light. I love the different ceremonies that you describe ! Well done Happy.