"MAKE PLACE! GIRAUN'S ENVOY HAS ARRIVED!", I shouted.   After a collective gasp of surprise, every soldier, every geroun present fell to their knees and slowly raised their head to contemplate the sight of their prophet. Kelyeran Glen Asturac stepped among them, bearing an ancient-looking book I never saw before and joined me on the dais.
Tynn Glen Greshorio, 155, The arrival of Humans at Irisport
Kelyeran Glen Asturac is a prophet on the Menicean continent. Just like gerouns' goddess Nelandra Aigleran, he once was a mortal that ascended to divinity thanks to his many heroic feats during his life.   Tactician, counselor, war chief, religious leader... Kelyeran has worn many hats and excelled in every role he played.


I started to kneel as well, but he stopped me by putting his hand on my shoulder and gently shaking his head. "It is going to be fine now," he said. "I can speak their language, tell the soldiers to go back to their duties. I can sense that these humans mean us no harm. Please stay and help me welcome them," he further explained, in a cold and neutral tone.   I wanted to praise the move, but the surprise and shock stole my voice; leaving me to nod an affirmative and turn to hand the orders to the soldiers.
Tynn Glen Greshorio, 155, The arrival of Humans at Irisport
Shortly after he was named Giraun's envoy, Kelyeran clearly stated the limits of the help he would provide to his people. Even if he is immortal, he believes that he belongs in the past, and thus will not further intervene in the geroun History.   This first rule, however, has some conditions. Without ever revealing what it was, the prophet explained that Nelandra foresaw many things that she wanted him to handle. Humans' arrival in 155 was one of them; she told him the exact date and location and asked him to learn their language.   The second exception to the rule is blasphemy. Kelyeran should be merciless to anyone disrespecting the Nelandrean Cult. The Cut-Throats learned it at their own expense when the prophet joined forces with the Royal Army to hunt them down in central Odelia using his divine powers.   The third and last exception is imminent danger. Any people trying to invade, infiltrate or hurt Menicea and its people will face the full power of Kelyeran's divine magic.   Apart from these two cases, he should not meddle in any way in his people's history. He sometimes gives advice to the king and has a close relationship with the clergy.

Kelyeran Asturac is very calm and shows few emotions whenever he gets to talk with someone. He does not seem to value himself more than anyone as he often sleeps in cities' Common housesbefore locals notice it and invite him over to the inn, embarrassed.   Every story seems to be entertaining him, as he listens with a soft smile on his lips. People noticed that he does not like talking about the Clan War so much. Being asked to do so often manage to change his emotionless face into a slightly annoyed, frowned one but still, he will. Humor and silly puns do not work very well too, at best giving him a slight grin.   The prophet has a small ritual in each town he visits. He will always stop by the local Nelandrean Altar, give it a quick inspection before inviting everyone to recite the Glen-Vinnien with him. Sometimes, he can be seen lost in his mind, staring at the statue and remembering god-knows-what memories, his eyes and expression frozen still.

Kelyeran is a thin old geroun, measuring about 1.60 meters high. He always wears his traditional religious outfit whenever he makes public appearances. His walking staff receives the same treatment, as he does not seem to ever let go of his usual apparel.   Despite his age and seemingly feeble physical condition, the prophet shows no signs of fatigue at the many stops during his travels. He stands straight and carries around his rations and his belongings in the many pouches on his belt.   His fur also seems frozen in time despite showing signs of old age. His black stripes used to be darker and his grey fur less dull. For centuries now, he looks like a fifty years old geroun.
When I turned back to follow the prophet, I saw that he opened his book and took a glance inside before immediately closing it again. Gathering all the courage within me, I dared to ask how he could speak the furless people's language, and his answer stole my capacity to speak once more.
"I see why your family is so successful. You are indeed curious! Nelandra foresaw these people's arrival and had me learning their language," he answered with an enthusiastic tone. It felt like I was talking to someone else, as his body language, expressions and intonation completely shifted.
Tynn Glen Greshorio, 155, The arrival of Humans at Irisport

During the Clans War

Kelyeran was born within the Aigleran clan, in a renowned family within the army. While he didn't have the required strength to become a soldier, fate put him in the right place at the right moment so he could display all of his intelligence and tactical senses.   At the age of 12, he was serving as a squire in the clans' army like many other young boys of his generation. One day, as he was cleaning his master's armor, he spotted an enemy scout and managed to track him down unnoticed to their encampment. After a day of observation, he came back to the camp and drew a very detailed map of the local geography, the location of the enemy troops and all the possible ways they could take to attack. The quality of the mapping was such that the war chief had to take it seriously and sent his own scouts to confirm the squire's reports, which all proved right.   As a reward, the war chief allowed him to stay and learn from the clan's strategist, who he ended up outclassing pretty quickly. Militaries just couldn't ignore his advice. Everything he said, every directive was always right, precise, and lethal to whatever enemy they were facing. When he was looking at a map at a war council, it was like someone else took possession of his body and spoke through him.   Naturally, when Nelandra took the throne after her father passed, he became one of her closest advisors and played a massive part in her conquest of the continent.

During the Golden Age

After Menicea was united, he played a significant role in organizing the new life on the continent. He made most of the tools needed for civilization to grow such as the Menicean Calendar, the Nelandrean Cult, and the Commonworkers.   While people already adored him for participating in the great salvation of all the gerouns, everything took a few steps further after he revealed his gift of non-aging. A few months after his announcement, he vanished in nature without saying a word to the population, and showed up a century later to be named "Giraun's envoy."   From there, he started roaming Menicea, reinforcing the Nelandrean Cult and teaching everyone its new values. This long travels took him years, where he stopped at nearly every hamlet on the continent, staying in Common houses or at someone's home if they had enough space.   Nowadays, he is still wandering on the continent and helping with leading the country when he stops at the capital.

Kelyeran is portrayed as a divinity of wisdom, protection, power, and travels in the many texts and ballads where he appears.
I never thought I'd see a divine intervention with my own eyes. Glen Asturac was in front of me, facing ten bandits attacking him with all their rage. "SIT, CHILDREN," he shouted at them, and I swear they did.   It looked as if they were crushed by an invisible hand, and it was not long before I could hear the bones cracking followed by the screams. He remotely broke one of each bandits' leg. One of them snuck on our side and tried to shoot an arrow to the prophet. Without even looking at it, he made the bolt turn over and reach the bandit in its leg.
A participant of the Cut-Throats' hunt 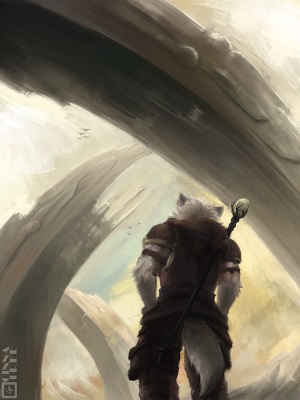 He kept that same attitude during the whole conversation with the strangers we would later call humans. We only talked once more before he went back to his travels, and he was back to his cold and gentle self again. Should he did not show up that day, we would certainly be at war with humans right now.
Tynn Glen Greshorio, 155, The arrival of Humans at Irisport
Important characters

I like that he's a person of abiding peace! He sounds like a kind and protective soul.

He's very respected for that. People used to ask lots and lots of questions whenever he would stop by their town, but they learned to stay calm and discreet as he didn't seem to enjoy talking a lot. He's very stoic around people most of the time.

Although I have no concept of age or time in your world (My fault, not your's, i'm sure), he does strike a very 'wise old man' archetype and I think it fits to him well. I'm curious to his travels and the people he meets.   This is clearly a good article if it has gripped me so. Thank you for writing it.

And thank you even more for reading. If his travels intrigue you, keep an eye out during summer camp ;) I might write them out if the right prompt shows up. :D

I just had to come back here from Fenris' article. I still love the art, brings a smile to my face everytime. Such a kind gentlemen, and I really wanna shake his hand.