Wait... what? You're telling me that this ain't Ménicéa's capital? How can it be? This city is freakin' huge, and... beautiful and... modern! What the heck?
— Arold Grentas, Human traveler.

Irisport is a coastal city, deeply settled in the Eastern Desert. Once a small village of fishers, it is now the second biggest city on the continent. It is, in fact, the place where humans arrived when they discovered Menicea. Having already a well-established road to the capital, Irisport stayed the main port for foreign boats and their wares.

Long ago was the time where Irisport's locals were mainly fishermen and glassmakers. Now, they look a lot like their brothers living in the capital, a direct cause of the cities development over the years. 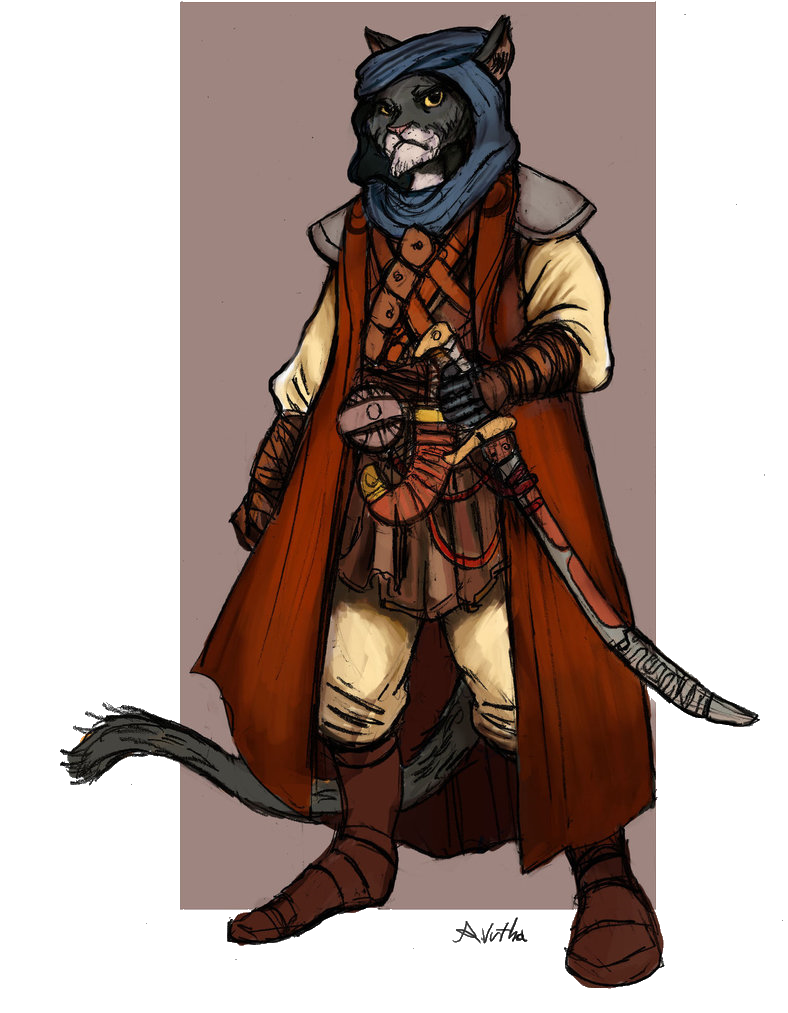 by TheLivingShadow
However, living for a long time in the desert marked their coats that stopped growing when approaching the cold season since the desert is always so hot. They became resistant to heat and can now easily handle it.   With new encounters came knowledge and culture. Foreign literature and art flowed through the city of Irisport. The presence of foreign engineers and scholars gave Irisport even more knowledge than the Capital City.   Just like culture did, the average wealth of people raised compared to the rest of Menicea. A lot of Gérouns reacted smartly with the arrival of merchants from overseas and moved to Irisport to offer their services and partnerships. Irisport is now richer than Nélandra, and it can be clearly felt by walking in the city. People are well dressed, and the first fashion movements appeared a few years ago.   However, the former inhabitants of the desert didn't completely disappear. There are still a few hamlets to be found at the corner of a dune, where people live away from the city's agitation, sometimes even by the wind for a few nomads. They thrive by selling some trinkets, small objects or handcrafted jewelry to foreigners that will resell them for a few coins back home.   Gérouns can be found in every kind of work in Irisport as they represent 80% of its population. They are though the only ones to be in the high spheres of society in the city. Even though they make a lot of money on them, a lot of aristocrats, that rule the city, don't see humans and other foreign species in a right eye. They prioritize their brothers in everything and are even said to make harsh things to reluctant strangers where nobody can hear or see them.

Other species have a rough time on Menicea, and Irisport is one of the best places for them to be. Gérouns are overtly racist, or at least they don't like the idea of having foreigners on their lands. This feeling, still lowered as the years went by, is still present as most of the non-Gérouns will be called "Sien-Grisso" or "Sien-Grissa" - Furless instead of gati or gatia - mister or miss. 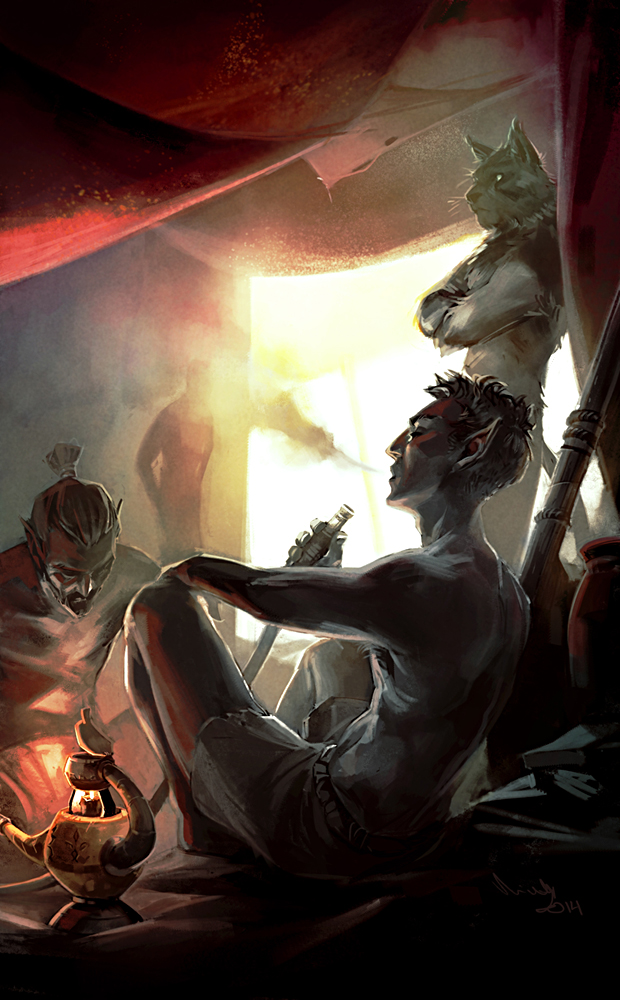 After they were finally allowed to sleep on the lands, a special district was built for them next to the ports and the poor neighborhoods. Gérouns said that this separation was necessary since humans are taller, but the actual difference is only of 10 centimeters. The less subtle locals clearly told that they didn't want strangers next to their houses, and many complaints from the poor district were heard at the Governor's office.   Yet, foreigners play a crucial role in the current modernization of Menicea and especially Irisport. They are the ones who brought knowledge and wealth to the city and who keep working for them. Through the years, reluctance and reject of the locals slowly became a delicate tolerance. Nowadays, Gérouns and the other species have this spark of rivalry that leads them to playfully argue about who's the smarter and who's been the more blessed by nature in taverns.   Humans and other species will only be found in manual works, building mostly and in trades. The city is solely ruled by Gérouns, who aren't ready yet to let anyone but themselves in command of their lands. 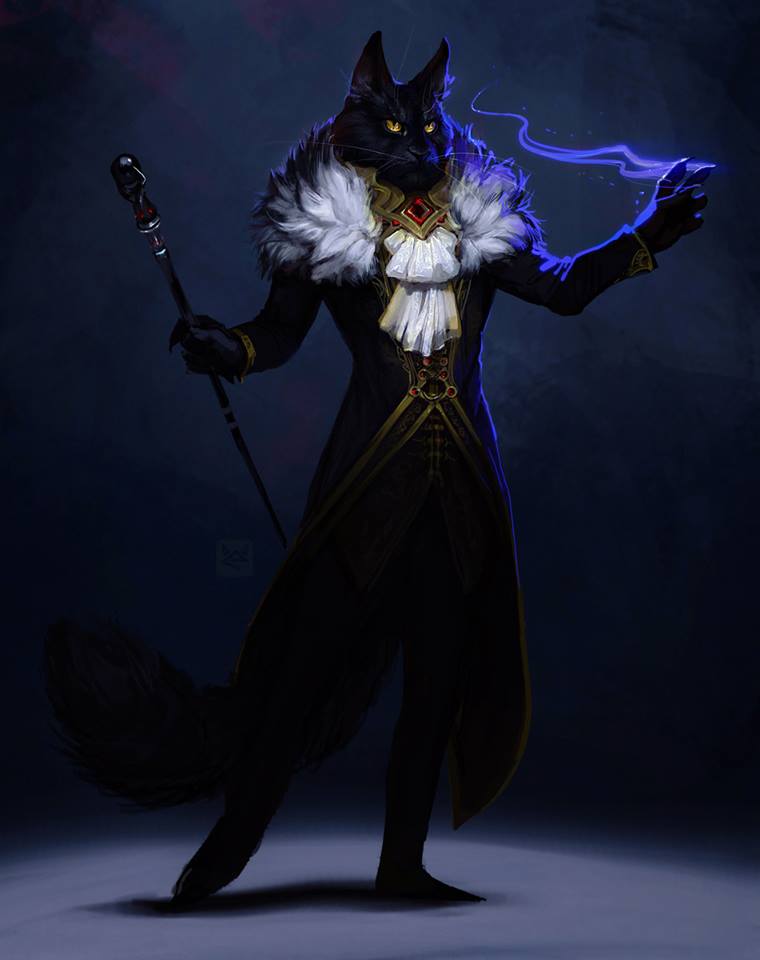 by Exellero
Irisport is led by its aristocracy. Nobles were entrusted with the control of the city after it grew bigger. Each house has to attend a council held every week and debate then act decisions. They still have to fulfill the mission they received when accessing the nobility, which makes their work quite exhausting.   If this manoeuver was intended to make the city's management more comfortable, it did the exact contrary. There's no place in Menicea similar to Irisport's court concerning corruption and inner struggles. Most people live in the city without even knowing it, but there's no doubt that local nobles are fighting for more than everyone's sake.

Irisport is the central hub from where overseas merchandises flow into the continent. From there, dozens of caravans depart each day to the rest of Menicea.   The city itself is specialized in the forge industry and jewelry. Still, there are thousands of craftsmen of every kind living in the city. Workshops are spread all over the city, and their wares flow directly into the ships sailing to the rest of the world.

The most remarkable thing about Irisport is its Golden Palace. It is the Governor and Aristocrats court, where they host parties and conferences about the city's policy. Foreign merchants are also received in the palace when they come to Menicea for the first time.   The palace's construction began right after Menicea was discovered by Vrans Gardis. Human builders were hired to build the city's water network for the fountains and the fields. The castle is surrounded by five towers, covered by golden domes visible from kilometers away.

I don't know how these cats can be racist in front of that building, honestly. There are marks of our architecture everywhere. That's pure hypocrisy.
— Arold Grentas, Human traveler.

You cannot speak of Irisport's history without mentioning The Greshorio Family. If it wasn't for them, this city would likely still be a small fishermen's town.
— Ferik Cissa, historian

Irisport began shortly after the beginning of the Golden Age. A few nomads of the @Eastern desert gathered nearby the coast and founded a small village.   Irisport's story is currently being rewritten alongside the whole region where it is. Please check The Greshorio Family meanwhile.

Beautiful fountain built in Irisport to celebrate the friendship between Humanity and Gérouns.

Excellent design, excellent use of images, plenty of detail. Only criticism is I felt that a few of the bolded phrases did not need to be bold (such as 'wealth'), but that doesn't really detract from the article's quality in any meaningful way. Great work :)

Cool! I love the artwork and the level of detail, and how integrated it feels into the world, plus the lore behind the city.

Interesting article, great use of imagery and artwork, and formatting. And you've filled out all the details to get a good picture of this city.

You said in another article that Irisport grew to ten times its size in a few years (in 155). Can you be more precise? Did the population go from 40 000 to 400 000 or was Irisport smaller at the time?

Oh, that was probably in the Golden Age article, which is very old. I won't take the risk of giving you precise numbers for now; I'm currently reviewing all these values as things got pretty messy when I moved to WA a while ago. I just want to be done with moving the Geography so I can get a good grasp of what I want the city's size to be, which is probably larger than 400 000.   The city blew up with Humans and Morknars' arrival, I used 10 times without really calculating it but yeah, a lot of people came in a short amount of time considering how much it grew. Still, I think that Irisport was around 40 000 inhabitants back then, yeah.   I'm really sorry, this must be so confusing. I'm bad with numbers, so I'm taking my time with this to make it right once and for all. x) This article is about the leading family of the city, it's way more recent and should be a better source of info about it, even if nothing is really numbered for now.