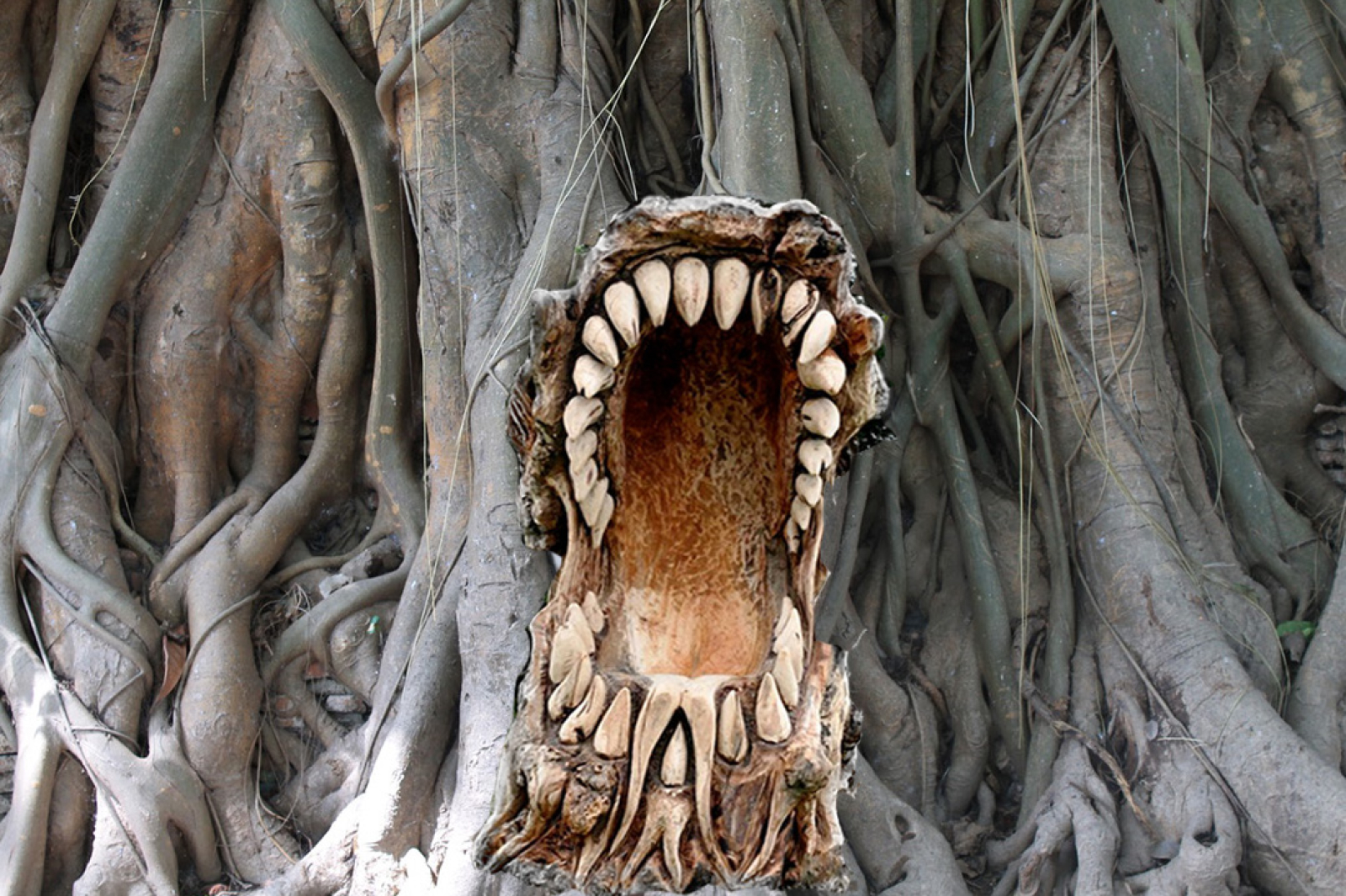 Zalyn, lost during the heat of battle, looks out over the devastation. Three of the wolves lie upon the ground, wounded. The rest are trying to gather themselves, and attend to the fallen, after Lokan's attempt to take control of the pack. Her erstwhile companions have all vanished down the dark hole at the base of the tree.   She approaches Tserg, who came through the battle better than most, and glances at him sideways with her arcane eye. She then asks him to accompany her down the hole, to seek out her party, and keep her safe from whatever might be down there. Tserg does as she bids.   After the pair finds themselves on the dark, snow-covered ground of the other realm, they hear the voices of the rest of the group up ahead. Catching up, they find Augusta, trying to keep a candle burning in the chill wind, along with Lokan, Agapia, Yuri, Svetlana, and Zorina.   Soon, a huge, ominous fortress made of living trees, and with a gaping wolf maw for an entrance, stands before them. A large, hirsute man with yellow eyes and fangs appears from a thicket to the side. He tells them that his name is Kolovul, and that he represents the Grey Wolf - master of this realm. If they would speak to him, he bids them to enter through the maw. Agapia immediately runs through, and the rest follow.   On the other side, they emerge in a huge domed chamber made of trees and vines. All appear to have made it through, but Agapia is nowhere to be found. A low, booming, disembodied voice welcomes them, and thanks Lokan and Tserg specifically for having heeded the call. To the rest it says that in the interests of fair play, it will let them go to prepare for what is to come, for the wolf people are now gathering, and preparing to lead the assault on those that long ago treated them unjustly, and drove them away. In response to numerous questions, the voice calling itself Grey Wolf says that long ago, his people, the Children of Darkness, lived in harmony with the Children of Dazhbog - the god of Light. After the latter left for southern climes, the Children of Dazhbog were left in charge of these lands. Because they were wise, they became the priests, magi, and leaders - the volkhvy, and the princes. But after the coming of the New Faith, humans turned against them, and tried to destroy them. Now, in possession of the one who has swallowed the Egg, they once again have power on their side, and will mete out justice to those who wronged them. Lokan objects that the humans have numbers on their side, and that other creatures will not be under the wolves' control, but Grey Wolf counters that all creatures of Darkness - including Zalyn and Zorina will feel the pull, Nezhit' will fall under his control. As for humans, they can decide for themselves whether they want to seek out a place for themselves in the world to come. Those that refuse will be destroyed. Lokan submits that Grey Wolf makes a good point, and is sent out, along with Tserg, who is suddenly unsure about why he is there, to rejoin Danifa's pack, help guide it to their hideout, and await further instructions.   Most of the rest realize their predicament, but feel like staying here is not an option, and decide to take the opportunity to leave. Augusta in particular tells Yuri that the reasonable thing is to leave, and to fight another day, but the cossack refuses to leave without Agapia. This elicits a reaction from Svetlana, who accuses him of abandoning her for the girl. When Yuri says that it is his duty to protect Agapia, just as it was his duty to rescue Svetlana, Svetlana shouts out that she is pregnant, and storms out of the exit that has appeared. Lokan, wondering aloud whose the child is, follows her out with Tserg, Augusta, Zorina, and Zalyn.   Yuri remains behind. Soon, the doorway opens again, and Kolovul enters. Grey Wolf's voice commands Kolovul to finish it, and the hairy one changes his form into that of a wolfman, and lunges at Yuri with a cudgel, and snaps at him with his teeth. Yuri holds him back with his spear for as long as he can, but he is hurt and exhausted by the battle, and Kolovul soon overcomes him.

* * *
Back outside the tree, the Serpentslayers discuss what to do. Zorina wants to seek out her horse, and Zalyn, now without a mission, and out of place in the woods, wants to return to Ladeisk. Augusta speaks of doing the same, to warn the prince about the impending wolf attack. Lokan, for his part, has made up his mind to stick with the pack, and to part company with his companions. He and Tserg depart, and soon find the rest of their brothers, and Danifa, resting up after the battle.   Back at the tree, the rest of the Serpentslayers group take a rest before parting ways. In the morning, Yuri's bruised and battered body is belched out from the hole. He is unconscious, and has a handwritten note pinned to him, warning any who read it to go forth to the surrounding settlements, and to warn the residents of their impending doom. Augusta restores Yuri to his feet, and then he, having failed to rescue Agapia, must decide where his duty now lies. Svetlana is clearly avoiding him.   Soon, the sounds of an approaching party of riders from the east are heard. It turns out to be Archbishop Nikifor, along with Zinovii, who was apparently visiting the latter on a mission from Grand Prince Vasilii. The Bishop is glad to see Yuri, and asks him about his exploits since the cossack left Malinka early that summer. After hearing Yuri's story, he explains that he is on his way to Ladeisk for the winter. He is obvously concerned about Grey Wolf, and asks Yuri to go warn those of his servants who are left behind to take care of his summer estate. He also relates that there is a cavern somewhere on the outskirts of Vladykino, where, according to legend, lie bogatyrs, waiting until the Land of Nor' has need of them. That is a place which, according to prophecy, Faithful refugees may also hide, to ride out tribulations. Nikifor takes Yuri back to one of his wagons, where there is a sacred icon which should help him and any others gain entry into this place. But Yuri is surprised to find that also in that same wagon is a bound prisoner - Zbigniev the Miller. He is ungagged, and then knowingly asks Yuri how he has been, and how his bride is doing. He suggests that Yuri should free him, and bring him along back to Malinka, but Yuri refuses.   In the meantime, Zalyn, after she discovers who Zinovii is, takes him aside and has a chat with him. After he figures out who sent her, he says that their conversation is one that should be had in private, so he recommends that she accompany him and Yuri back to Malinka.   As for Zorina, she spies her horse among those being brought along by the Archbishop's people. She is unsuccessful in getting it free, but after Nikifor departs, she follows his coterie west, in fox form, and waits until they camp out for the night. She then changes to her human form, and attempts to sneak past the watch, to lead it away. After one unsuccessful effort, fortune smiles on her, and she is able to ride away, toward Malinka.
* * *
At the werewolf camp, it's clear that Danifa and the others do not trust Lokan anymore, despite his change of heart. She tells him that she has had a vision, and that he should go to Malinka to help prepare the place for Grey Wolf's assault, while the rest of the pack will return to their hideout, and await reinforcements for the assault on Ladeisk. Her prodigal son does as he is told, and departs.
* * *
After a full day's travel, Yuri, Zalyn and Zinovii arrive in Malinka. Svetlana travels with them, hoping to continue on to Vladykino to rejoin any remaining family, but she keeps away from Yuri. They arrive at the archbishop's estate after night has fallen. An early fall frost descends upon the settlement, and snow begins to fall.

A sacred icon, supposedly helpful in accessing a lost cavern