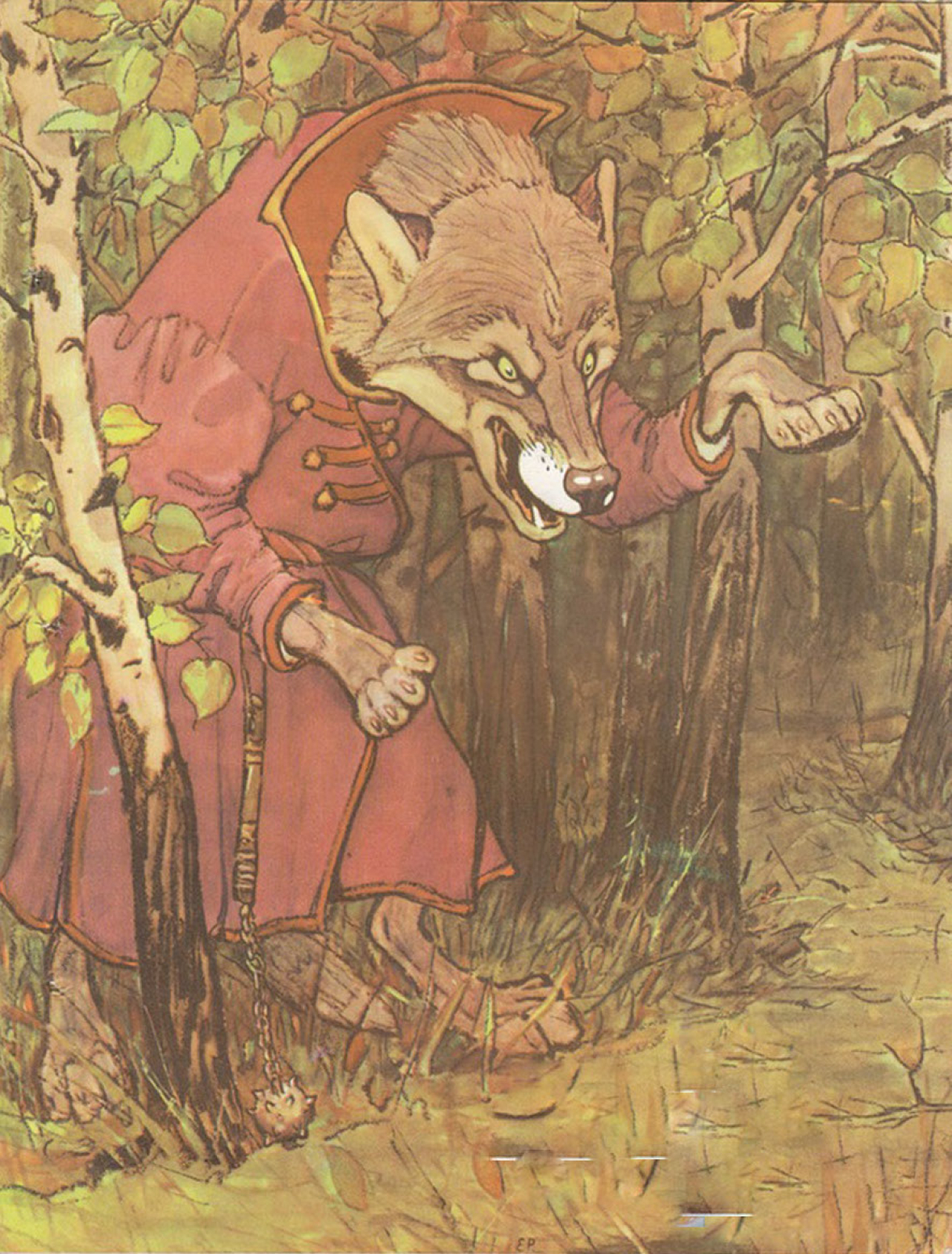 Initially, the Wolf was a wise councilor of heroes and guide to the volkhvy priests, many of whom are probably descended from him. His power, and the great respect afforded to him resulted in the wolf being the most common of the shapechangers, the being that was most closely associated with them in the popular imagination. But with the coming of the True Confession, the leaders of human society began to regard him as a minion of the netherworld and the forces of Darkness, a harbinger of war, winter, and famine. In their view, he dedicates himself to destroying Light, swallowing the sun, or, at the very least, to devouring the human servitors of light and their livestock.   As a result, the Grey Wolf, unlike most other shapechangers, is greatly feared, and virtually never referred to by any endearing epithet. To the Church, he is a servant of Bies (the Devil), to the peasants – he is in league with the netherworldly god Veles, nechist’, and ‘unclean’ beasts like the raven and the lizard. But paradoxically, the Wolf sometimes acts on behalf of divine powers, when he turns on his unholy allies and devours them. Thus, though greatly feared, he is still respected for his power.   The wolf is most commonly associated with the male of the species (who is frequently blamed for the theft of women), but female wolf shapechangers are not uncommon, and often attain great power as hunters or practitioners of the arcane arts. In human form, wolves may sport a graying mane, yellow pupils, and oversized yellowing teeth.   Unlike most other shapechangers, wolves often live in groups of their kind, dwelling together in forest lair or fortress, and attempting to expand their domain. Nevertheless, scions of such groups are introduced into human society quite frequently, either to promote some long-term purpose of one of their parents, or because their parent or clan lost a power struggle, and is trying to hide their young and keep them from harm.   In the wild, the word of the flock leader is law, but within human society, the path of the lone wolf is a common one. Wolves know themselves to be feared and hated outsiders, and they either hide their true nature in order to survive, or relish their marginal status. Wolves thus commonly assume the heathen station, though they are just as often ruffians, vagabonds, or persons-at-arms, and less often, boyars, peasants, or scribes. Whatever the case, they are driven to live and act in accordance with their nature, and hate pretense, false modesty, and hypocrisy above all vices. Those wolves that long for structure and belonging typically join (or are placed onto) the retinue of princes or boyars as soldiers, enforcers, scouts, or magical advisors. But a wolf shapechanger will never entirely feel at home in cities and villages, and will always long to return to his or her own kind. No matter how much you feed a wolf, the peasants say, he is always looking toward the forest.   Given their difficult and dissident lifestyle, wolves are obviously not without their vices. They tend to exhibit selfish, greedy, bloodthirsty, and gluttonous behavior, and that can often lead to their downfall. They often rely on others to attain their goals and to ease their integration into society, and these others often turn out to be unscrupulous manipulators who exploit the wolf’s disadvantages to the fullest extent possible.   Wolf shapechangers sometimes have difficulty controlling their appetite. Alden Gravenitch, who admitted to being one immediately upon joining the party once attacked a householder in order to take his cow, and ended up eating him. Wolf shapechangers also frighten livestock. It was initially difficult for Alden to get his friend Fedor's horse to allow him to ride it. Lokan, who also recently came out as a wolf shapechanger, frightened lifestock at the Holy Veil monastery without even transforming into hybrid form.   The wolf shapechanger is also known as a volkolak.