Remia is the most prestigious school of the arcane in all the world. Everyone with the proper means and interest attends this school. Those without the means but shows exceptional talent are allowed to participate but are required to work at the school amongst the servants to earn room and board. The exclusiveness draws incredibly talented rune casters from all over the world which the school then uses to justify making the tuition high and making the school all the more exclusive. This cycle has led to the school amassing a significant amount of wealth and opulence that further adds to the mystique of the academy. Even the school's detractors have to admit that the school has produced the most substantial number of proficient and talented rune casters out of every arcane school. Although, these critics are also quick to point out that the school's tendency to snatch up promising rune casters from other schools contributes a great deal to the other schools having a much lower number of prominent alumni.

Archmage - Headmaster of the academy voted into position by the Magus. In charge of hiring and dismissing Magus and approving the more outlandish research and experiments done by the Magi and students.
Magus - Teaches classes at the academy and researches their chosen study of runes.
Acolyte - Research and teaching assistants.
Student - Students from the ages of 10-18 who learn how to write and use rune magic.

The public agenda of Remia is to provide children and teens who show tremendous potential in rune casting an environment which they can learn how to power and use runes. They also give Magi and Acolytes a place to conduct research and experiments with runes. In times of need, Remia can also provide healers or other rune casters to villages and towns that need them. In other times, Remia can pass on these requests to alumni who are skilled in healing or other runes necessary to help the situation.

The history of Remia began a few decades before the idea was even conceived or the keystone for the initial school building was laid down. Decades before the start of the new era, around 67 B.R.C, an albino man Leobwin Cenric received a vision from the goddess, Isyn, who showed him the wine stain birthmark on his face could be used to power runes. Before this revelation, runes were thought to be useful but entirely unmanagable as there was no set way for someone to write runes. Instead, runes were symbols, usually fashioned into necklaces or painted on shields, passed down through families that believed the emblem would protect them or provide them luck or provide some other kind of benefit. Anyone who took the symbol by force would find themselves experiencing the opposite of the family with them being more susceptible to harm. Anyone who received the emblem not by force but instead through trade or rediscovery would find the symbol neither beneficial nor harmful. And so, by using the symbol created by his birthmark, Leobwin Cenric was able to tie the rune to himself and then any runes added to it would be powered by his abilities rather than belief in the rune.
Isyn
Don't trust what she says. Demons always lie

Leobwin Cenric spent years traveling the world, recording runes he could find and figuring out how to combine them with his own symbol. During this time, Leobwin Cenric began gaining a reputation as someone who could cast runes at will and he began being approached by nobles and peasants alike to take their children and train them. Wanting to spread his knowledge, Leobwin Cenric began teaching children from a shack on the lake where he'd had his vision. He had to turn away a number because of lack of ability but, in the end, Leobwin Cenric had a group of about thirty children who showed promise. Amongst these children were Folcher Chlothar, Otwin Theudemar, Amelina Humbert, Osanna De Rege, and Rosmunda Blackwell who would go on to found Remia.A schism formed between these six and their teacher in 11 B.R.C caused these six as well as some other students to leave. The cause of the schism has been lost to time and history but from then on these students never interacted with their teacher ever again.
Schism
He wanted rune casting to be available to all. They saw an avenue for profit. A shame Leobwin wasn't more discerning in choosing students.

Otwin Theudemar, Folcher Chlothar, Amelina Humbert, Osanna De Rege, and Rosmunda Blackwell cultivated an even bigger reputation than their former teacher by selling their services. Eventually, the then Lord Gautier Oweyn of the fledgling kingdom Aryia offered to give them the best plot of land in the capital city of Llyne if they agreed to build a school there.   The current era is considered to begin the year construction of Remia began. While construction was going on, Folcher Chlothar and Rosmunda Blackwell and their followers who were talented in the then-fledgling art of healing expanded their renounce when they accompanied Lord Gautier Oweyn and his soldiers on a campaign to conquer the neighboring kingdoms of Tapis and Lales. Not only were the campaigns successful, but they were also completed faster and with fewer casualties than any other thanks to troops being healed and returning to the frontline faster than the opposing army could. With these victories, the usefulness of rune casting was finalized in the eyes of most people, and the growing kingdom of Aryia prospered greatly for being the first to capitalize on this valuable resource.   Three years after starting, construction of Remia Academy of the Arcane finished in the 4th year of the new era. With the opening of the school, once again there was a flood of parents from every walk of life seeking to send their children to the school but, for the most part, only those with ample wealth were able to achieve this goal. There were a few students from the peasantry who showed remarkable skill though, and the founders declared that they would be allowed to attend but on the condition that they work on the academy grounds to earn their way. There was some grumbling about the apparent biases the school had towards the peasantry that led to some to try to seek out Leobwin Cenric but, no one could find him or the students who had stayed behind to keep learning from him. The founders expressed great dismay over this news and declared the shack he had taught them in to be a sacred site and expressly forbid anyone from seeking it out for fear that it might be vandalized. To further honor their teacher, the six founders declared that Remia would from then on have one Archmage to lead the academy rather than six as they had been doing so far.   As the years passed, both the power of Remia and Aryia grew until the kingdom of Aryia covered a third of the continent of Thaesia and Remia now contained so many students, magi, and acolytes the construction of a second academy Aldert Academy of the Arcane was needed. At the same time, some magi originally from different countries expressed interest in building academies in their home countries as there were many children and teens with innate abilities with runes whose parents could not afford to secure their passage across seas. After some debate, the then archmage, Jesper Thøgersen, agreed to let these magi leave not only with his blessing but, with a large number of funds that would, if not cover all of the cost of the construction of these academies, would cover most of it.   Remia saw a brief period of disfavor following the arrest and execution of Baron Gavriil Aukes. To counter the negative news that was causing people to question the academy's secretive nature, the then archmage, Moritz Ruhl, made the first ever public decree saying that the academy would require all students who graduated and began selling their services to submit to twice-yearly inspections by the city guard. He also made it so no one, not even an archmage or an alumnus would be allowed to perform research with healing runes without at least one other person present and made every student who entered the field of healing runes swear never to harm another person.   In the years since the incident with Baron Gavriil Aukes the academy's reputation has recovered. Currently, there are branch academies of Remia in all the major cities of Aryia and sister Academies in every single nation except for the island nation of Kimiri and the marsh nation of Huición. The academy has also undergone recent renovations that expanded the land surrounding it to make Remia the most lavish site in Llyne, outshining even the palace. Due to the academy's close relationship with the Oweyn line, there is a small section of the population that wonders if the archmage of the academy can influence the King. Given that many prominent rune casters find employment in the palace or the Aryian army there does seem to be some truth to this talk. Some though, still remember how the academy never truly became transparent after the incident with Aukes and did not disclose what research goes on within the walls of the academy to anyone, not even the King. 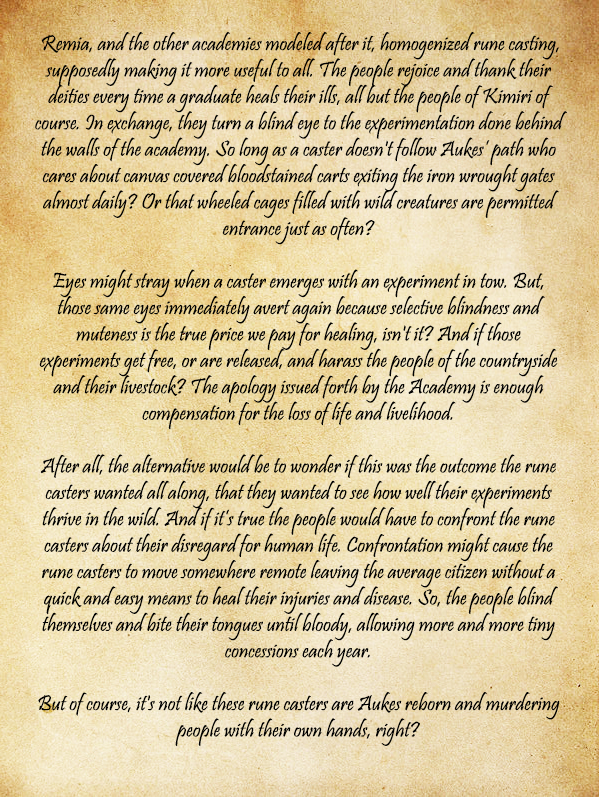 by yukimoda
[Transcript:
Remia, and the other academies modeled after it, homogenized rune casting, supposedly making it more useful to all. The people rejoice and thank their deities every time a graduate heals their ills, all but the people of Kimiri of course. In exchange, they turn a blind eye to the experimentation done behind the walls of the academy. So long as a caster doesn't follow Aukes’ path who cares about canvas covered bloodstained carts exiting the iron wrought gates almost daily? Or that wheeled cages filled with wild creatures are permitted entrance just as often?   Eyes might stray when a caster emerges with an experiment in tow. But, those same eyes immediately avert again because selective blindness and muteness is the real price we pay for healing, isn't it? And if those experiments get free, or are released, and harass the people of the countryside and their livestock? The apology issued forth by the Academy is enough compensation for the loss of life and livelihood.   After all, the alternative would be to wonder if this was the outcome the rune casters wanted all along, that they wanted to see how well their experiments thrive in the wild. And if it’s true, the people would have to confront the rune casters about their disregard for human life. Confrontation might cause the rune casters to move somewhere remote leaving the average citizen without a quick and easy means to heal their injuries and disease. So, the people blind themselves and bite their tongues until bloody, allowing more and more tiny concessions each year.   But of course, it's not like these rune casters are Aukes reborn and murdering people with their own hands, right?]

I have liked this article when it was still work in progress but dammn you have done great! Beautiful work, well designed and an excellent timeline!