Something just isn't right about this place

"Hello?" Joris called as he approached the dilapidated buildings.   All of the buildings looked run down as if no one had maintained them for years, but he still had a feeling like someone would pop their head out of a window or door at any moment. He made his way from one building to another until he reached the shack on the edge of the lake. He fully expected the interior to match that of the other two buildings with everything covered in a thick layer of dust and cobwebs. When he peered inside, however, he found the interior to be oddly pristine as if the owner had only just stepped outside.   "Hello?" He called out again.   The hairs on the back of his neck stood on end, as he received no response yet again. Something wasn't right about this place, and he did not want to stick around to find out what it was. So, he bolted from the area and did his best to put the remote cabin from his mind.   After half an hour, Joris slowed and tried to remember why he'd been hurrying in the first place. Unable to remember, he shrugged and continued looking for some shelter he could sleep in overnight.   The cabin, forgotten once more, silently slipped into obscurity, waiting for someone to come and unearth its secrets.


This seemingly unremarkable cabin is the home Leobwin Cenric was living in when the secrets of Rune Casting were revealed to him. After he began teaching students, this cabin became the first school of Rune Casting and was declared a sacred site by his former students. The exact whereabouts of the cabin have been lost to history as all records of how to reach the cabin have been locked up in a vault in Remia Academy of the Arcane. 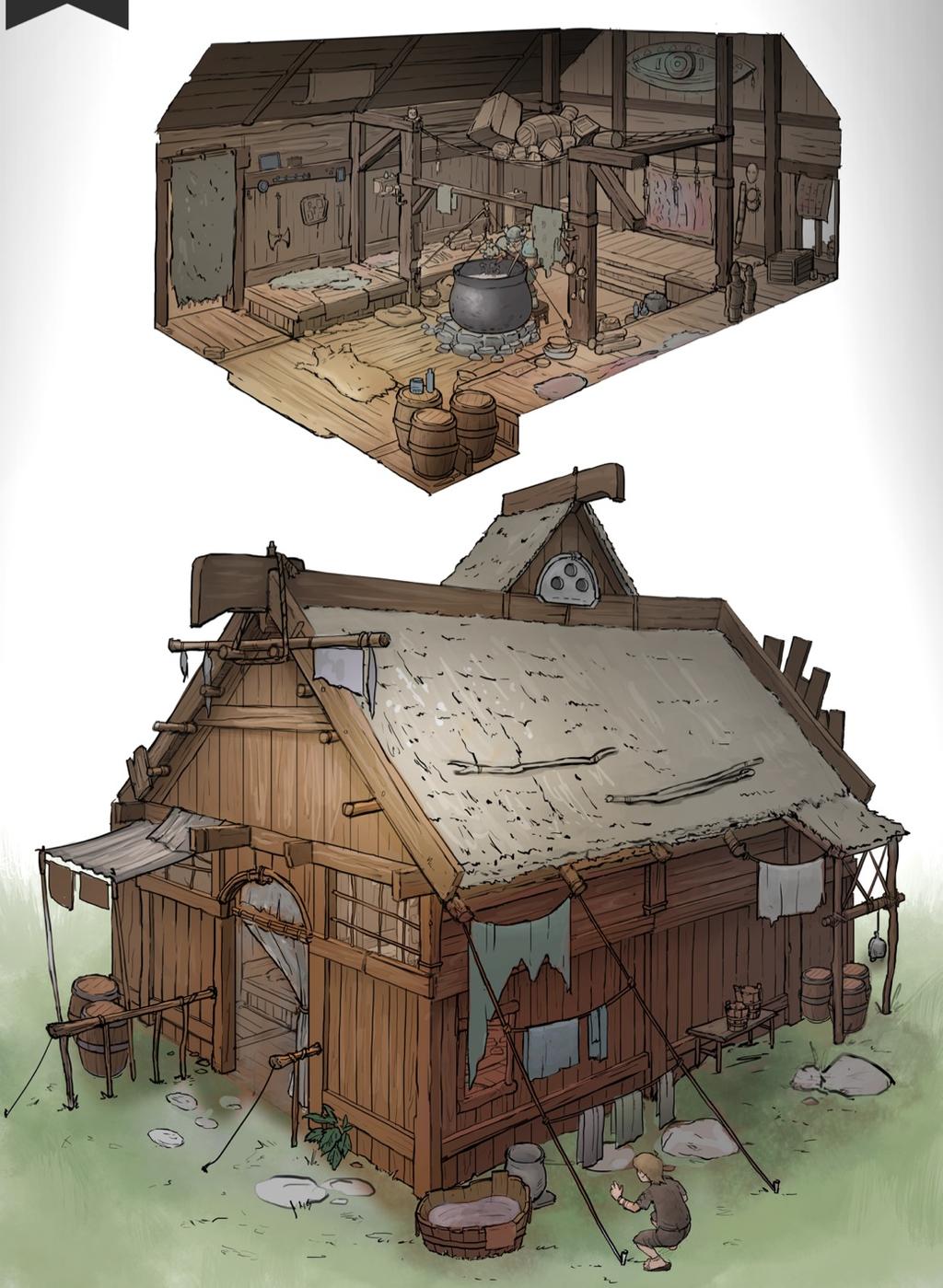 The Hut by whiteoxygen
When the cabin was occupied by just Leobwin, it was a small one-room shack built with hardwood planks and tree trunks that looked modest, rustic and warm with small curtained windows.   The two buildings he built, later on, were built using similar materials but were twice as big as his own cabin with bunk beds filling up most of the space inside. The student buildings also had small curtained windows and sturdy wooden doors left undecorated.   After Leobwin's disappearance, the buildings became rundown and took on a rough, cold look.

When Leobwin finally could not take the teasing and ridicule he received for the large birthmark on his face, he sought shelter in the mountains near his village. After wandering for days, he came across a small lake. It was on the banks of this lake that he built the cabin that would be his home for the rest of his life and eventual schoolhouse.   When he returned home with his thirty students, Leobwin built two other buildings. One to house all of his male students and the other to house all of his female students. But, the cabin he lived in was where he and his students learned how to harness the basic runes of healing, fire, ice, and earth. After a schism formed between Leobwin and some of his students the number of students living in the area was reduced by half.   schism
The schism like with so many things was the result of Isyn's meddling. By dropping a few comments and suggesting people pay for services to several of Leobwin's students, they were able to pick away at his ideas of rune casting being available for all. Gradually, some of the more greedy and scheming students began questioning these rules he'd set and Leobwin, a stubborn man by nature, refused to even consider changing his policy. He could see how starting with allowing people to pay even a few coppers for services would quickly evolve into nobles offering hundreds of gold to prioritize their needs over peasants. The arguing continued until finally in a fit of anger a number of prominent students left taking half of his students with them.
At some point after the schism, Leobwin and the students who remained with him seemed to disappear. It's assumed that Leobwin died as he was in his late eighties at the time, and his remaining students dispursed. However, the families of the students who hadn't founded Remia Academy of the Arcane reported losing contact with them around the same time. After these disappearances, the cabin fell into disrepair and its exact location was forgotten when all recordings of its exact location were destroyed in an attempt to keep the building intact.
RUINED STRUCTURE
10 ARC
Alternative Names
The Cabin, The Relic
Type
Hut
Owner
Leobwin Cenric
Owning Organization
Remia Academy of the Arcane

The guild of ambiance music (which i love, superb channel) and the art add soooo much to the reading ! You could make a horror/dark novel of this i'm sure !   However, i was wondering. How are thirty student could fit in his solo shack ? Would he do the teachings in rotation, or is the number 30 more of a max capacity than a full number. And did they had small hamlet like commodities to live by themselves like gardens ?   That was a really nice read and this music is going in my playlist. Ha

The 30 is more of a max number and I wrote that he built other buildings near his cabin so the female and male students could have their own quarters but I may have to be clearer about the living situation.

The guild of ambiance music (which i love, superb channel) and the art add soooo much to the reading ! You could make a horror/dark novel of this i'm sure !   However, i was wondering. How are thirty student could fit in his solo shack ? Would he do the teachings in rotation, or is the number 30 more of a max capacity than a full number. And did they had small hamlet like commodities to live by themselves like gardens ?   That was a really nice read and this music is going in my playlist. Happy Summercamp !

Nice article. I liked the introductory story and the music.   A few suggestions: "All three looked rundown" -> I was really confused for a while about this sentence, particularly the beginning. I think something like "All of the buildings looked..."   "when the secrets of Rune Casting was revealed to him." -> replace was for were (secrets is plural)   This sentence is unduly long, with names the reader is not familiar with, which makes the reader tune out.

After the schism formed between Leobwin and his students Amelina Humbert, Blaise Rouzet, Eliose Bain, Folcher Chlothar, Osanna De Rege, Otwin Theudemar Rosmunda Blackwell, and Solange De Verley the number of students living at the cabin was reduced by half.

I think the paragraph may read nicer if you simply said "After the schism formed between Leobwin and part of his students" and then added a sidebar with the students' names and the reason for the schism.   I really liked that the cabin is being mysteriously maintained and the mysteries that may lie within!

As the other comments have pointed out, the atmosphere was brilliant when reading. the music and design (CSS) complemented each other as well as that introductory story. One thing that I only recently discovered and now would like to see everywhere are excerpts. These are short description of articles which appear when hovering over a link to them. For example, this would be really helpful to understand the idea behind Rune Casting without having to go to another page for the information. You can find the place when editing the article under Design - Excerpt. Another thing I commend is your use of the sidebar to link the reader further into the depths of your world.

Thank you for the feedback! As you suggested I have added excerpts to the articles linked to this one. I hope that makes things clearer!

It does, thank you very much :D