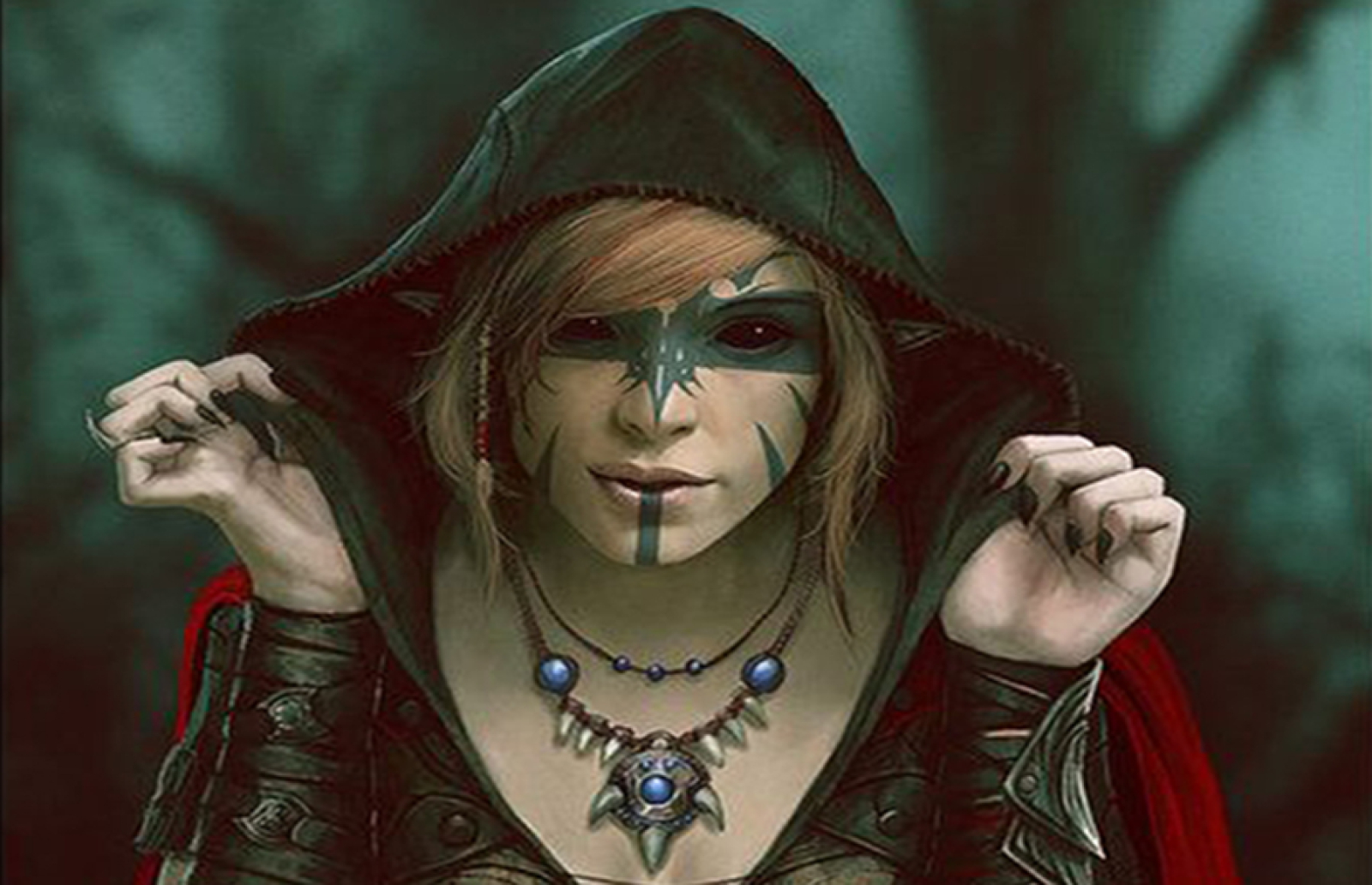 Spread chaos throughout the world.

Isyn in their most familiar form appears to be scrawny and underfed despite not needing to consume food. Their body and limbs are short and skinny but they are incredibly fast and strong because of their demon blood.

Their natural skin tone is a yellowish white color and their hair is short and choppy looking with a few braids mixed in the varying lengths of hair. Their shoulders are narrow and hips are nonexistent on a skinny waist. Their arms and short, thin, and gangly and their legs are equally as short and gangly. Their fingernails are naturally points and naturally colored black and they purposefully keep them short.

Has pointed ears that are pierced with small black rods.

A majority of their face is covered in a tribal tattoo that has been on their face as long as they have existed. They have a small round face and pointed chin, their cheeks are slightly gaunt just like the rest of their facial features. Their nose is small and upturned and their lips are oddly full despite everything else looking quite gaunt.

Walks with a massive slouch. When they sit, even on a chair, they sit crouched on top of their feet.

Can change their appearance at will. Is super strong and super fast.

They wear a hooded brown leather armor and a bright red cloak that they emerged from Sedum wearing. Around their neck is a necklace they created using bone, stone and jeweled. They also wear a single clawed ring on the middle finger of their left hand.

Isyn had existed for as long as time itself. All they remember from their birth is that they were in a great mass of writhing blackness and then suddenly they were outside the mass fully formed. Their new surroundings held their attention span for less than a second before they grew bored and looked for something to do or someone to bother. The other divine beings provided a respite from their boredom and Isyn spent many millennia harassing and pranking them.   But, soon this too did not satiate their boredom, so they looked for another target. They found their mark in the newly emerged beings known as humans that Lyvona was so carefully raising up from their meager beginnings. Isyn found this incredibly dull and began sowing chaos amongst these beings. They soon discovered that with just the right amount of manipulation, they could get two groups of humans to slaughter each other. And so, they spent the next few centuries causing massive amounts of bloodshed.   Until they came up with a brilliant idea to cause chaos in both the mortal and divine worlds: teach mortals to bend the ways of nature using runes. Lyvona, in her kindness, had instructed the humans how to use runes using their belief in symbols but, had neglected to tell humans that they could power runes by using their spirit both because it would go against nature and it would be harmful to humans. Isyn, however, had no such reservations.   Isyn journeyed far and wide, looking for the perfect person to 'gift' this knowledge to before stumbling across Leobwin Cenric. Leobwin was an albino with a large red birthmark on his face, who because of his albinism and the eye-catching birthmark, had been ridiculed and teased throughout his life. Because of this ridicule, at the age of 15 years old, Leobwin left his village to go live in the mountains. It was at his remote cabin on the bank of a lake that Isyn appeared to him in the form of a beautiful goddess. They told him that his struggles had been a test of the divine beings to see if he was worthy enough to be given great knowledge they then told him that the mark on his face could be used to power any rune. As proof of this, they instructed him to draw the spirit rune, and the flame rune using his own blood and a fire erupted from the spot the rune was drawn on.   With great amusement, Isyn watched Leobwin immediately began going from town to town spreading the word of rune casting and eventually wound up with a group of thirty students. Six of which, Isyn was able to turn against their teacher with a few encounters where Isyn would be present when the students were using runes and made comments about paying a lot of coin for the service. As Remia Academy of the Arcane was being built, and Rune Casters helped King Gautier Oweyn. Isyn relished in the chaos but had to go into hiding because Lyvona and the other divine beings were actively searching for them. Because all of the rune casting was causing small ripples in nature that while unnoticeable would turn into devastating issues in the future.

Like every other divine being, they never received any kind of education or training in their abilities. They just knew how to do the things they could do.

Tricked Leobwin Cenric into believing she was a goddess and teaching him how to bend runes to his will.

Due to their innate abilities as a demon, Isyn is able to read humans well enough to accurately predict how not just humans, but entire social classes, will react to a stimulus.

Isyn has absolutely no morals whatsoever. Their only philosophy is that they hate being bored and will anything to end that boredom. They've been free of boredom for the past millennia.

If you can name a taboo, Isyn has either participated in it or was the one who created it.

Wants to cause as much chaos in the world as possible.

Oddly is very patient for a being that embodies chaos.

Gets destructive when they are bored.

Looks like she hasn't washed in a few days but, not totally filthy.

The beginning of time when the divine beings were emerging from Sedum the Divine Chasm.
Divine Classification
Demon
Species
Demon
Circumstances of Birth
Isyn was one of the many beings to emerge from the writhing mass that makes up Sedum and like all the others their existence was not wanted nor planned, it just came to be.
Biological Sex
Intersex
Sexuality
Pansexual
Gender Identity
Intersex/Genderfluid. They can change into whatever gender they wish at any time and typically appear before men as female and appear before women as male but, when they are with other divine beings they switch to their standard intersex appearance.
Eyes
Pure black
Hair
Short, ragged, blond hair
Aligned Organization
Remia Academy of the Arcane
Other Affiliations
Known Languages
They can speak, understand, read, and write in every language.

Their height changes depending on what form they choose to take. However, the one they are most commonly in is 4'10"

Like with their height, their weight changes depending on which form they choose to take. In their most familiar form, they appear to weight about 85lbs.

Unknown but if chaos erupts somewhere, they are usually nearby.
Form Isyn appeared to Leobwin Cenric in: 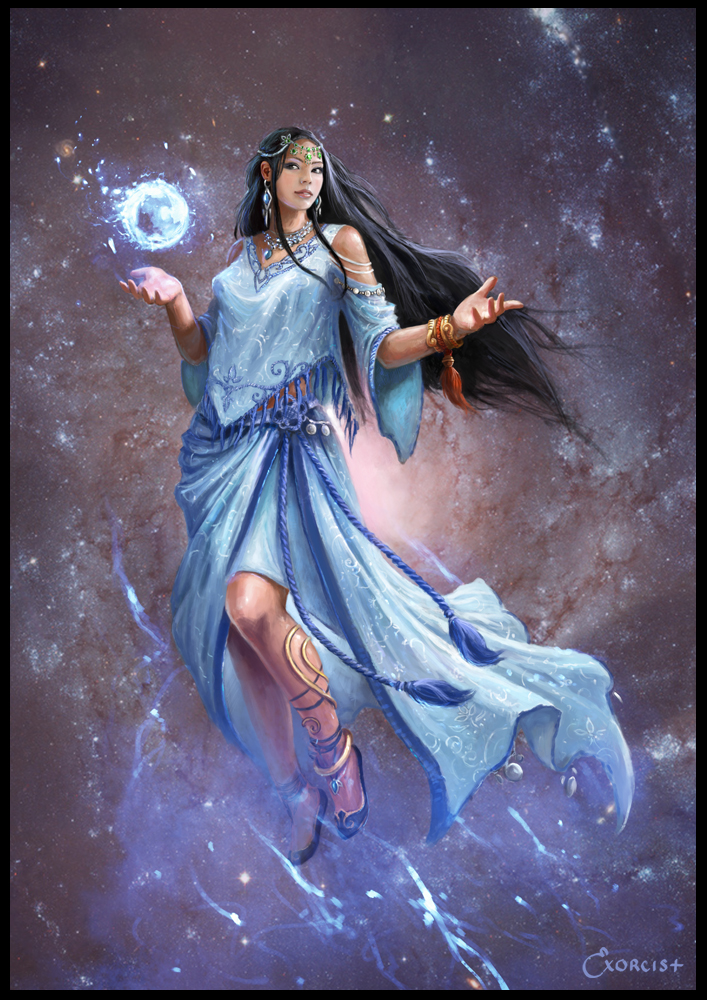 The Goddess Naaz by alexanderexorcist