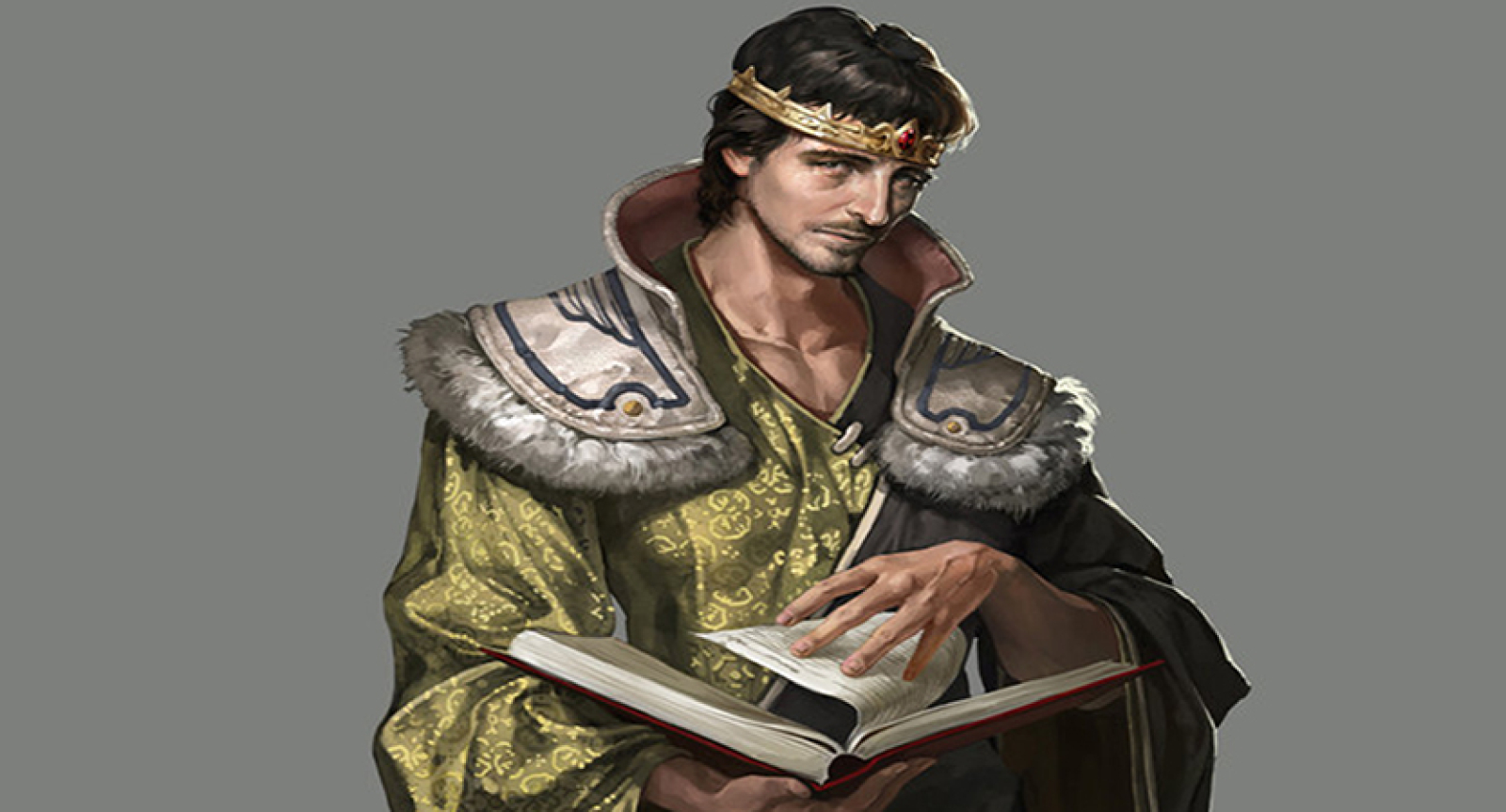 In order to become a rune caster, the individual must possess some innate ability with runes and graduate from one of the various arcane academies found throughout the world. 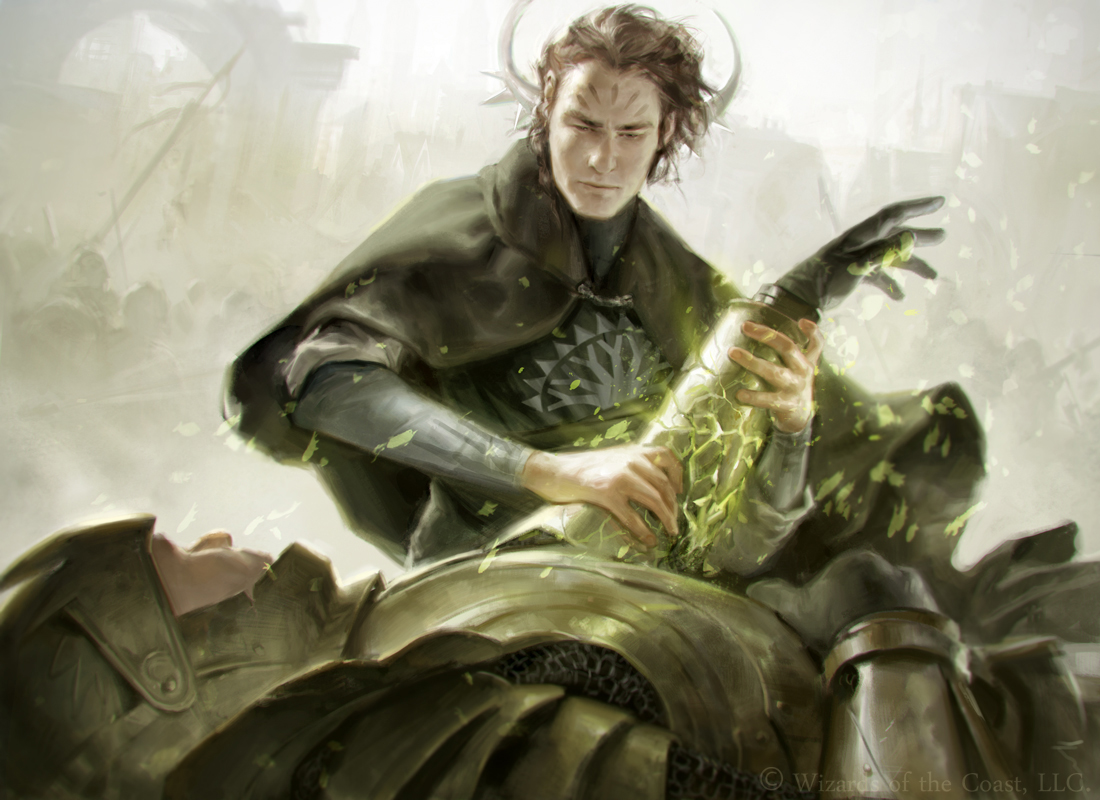 Mending touch by karla ortiz
Within the academies, there are a few ranks a person with enough skill can obtain. Immediately after graduation, a caster may apply to become an Acolyte at any academy under any Magus they so choose. After five years of being an assistant, they are able to apply to become a Magus at any academy. Alternatively, they can apply to become a member of the Survey Council where they take care of and look out for casters affected by Ataxia Putrida. If they choose to become a Magus, after two decades of teaching or researching at a particular school, they become qualified to become Archmage.   Outside of the academies, a caster may set up shop in any city they so choose, outside of Kimiri that is, where they sell their abilities for a steep price. Depending on how skillful they are, and how renowned they become, a rune caster may find themselves being asked to work exclusively for a member of the nobility or even a ruler.

Rune casters whose services are called upon are paid quite well and paid upfront for whatever service they are asked to provide. Many will refuse someone if they aren't able to pay enough while others will work out alternative means of payment or take the person into their debt.

Being a rune caster gives everyone, regardless of skill, a great deal of respect, fear, and fame. If they are skillful enough to rise through the ranks, a caster will also gain quite a bit of political clout as they become friendly with nobility, or in the case of those who work for nobles learn quite a few shames and secrets about the nobles around them.

Rune casters are perceived as a kind of sub-nobility. They command a great deal of respect and authority but, they do not own any lands beyond those they purchase or titles besides those they are born with, marry into, or earn.

Out of the total, 10 million people in the world roughly 150,000 are rune casters while an estimated 100,000 have the potential to become casters, but they are not interested in the profession, or are needed to help run the family farm, or are not within proximity to any of the academies. 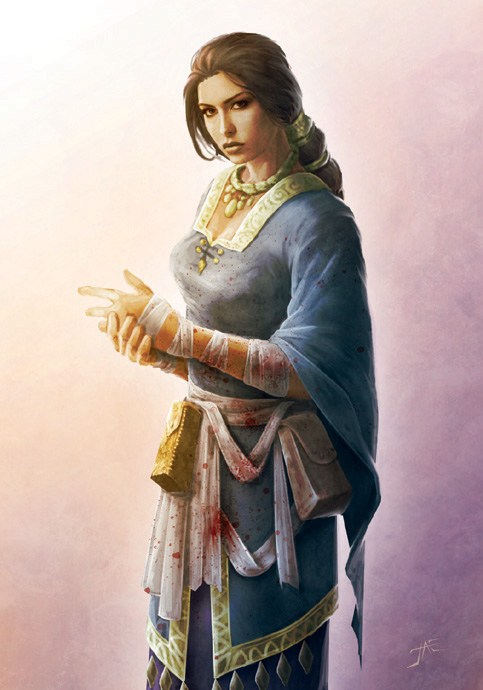 Healer by Jason Engle by Jason Engle
When Leobwin first used and taught rune casting, the profession was incredibly rare and looked at with a mixture of disbelief, astonishment, and a bit of fear. Due to him being the first, he was unable to help many people with his rune casting. Instead, he devoted his time and energy to teaching others in the hopes that they could help those he couldn't. Some of his students did provide aide for a small fee or nothing at all but, his most famous students Amelina Humbert, Folcher Chlothar, Osanna De Rege, Otwin Theudemar, and Rosmunda Blackwell deviated from this by selling their services to the highest bidder, King Gautier Oweyn. With the money they earned from helping his conquest, they were able to build Remia and became, at least to the average citizen, the foremost rune casters. The history books do not mention any of their classmates or their practices and Leobwin's disappearance meant there was no one famous enough to combat their way of doing things.

A surface or item that can be written on like paper, rock, dirt, or even a person's skin and something to write with such as a quill and ink, a hammer and chisel, but most typically the caster's own blood. The last type of writing implement is why many rune casters carry around at least one knife on their person's at all times.

Ink, blood, parchment, any surface that can be written on, and anything that can be used to write with. 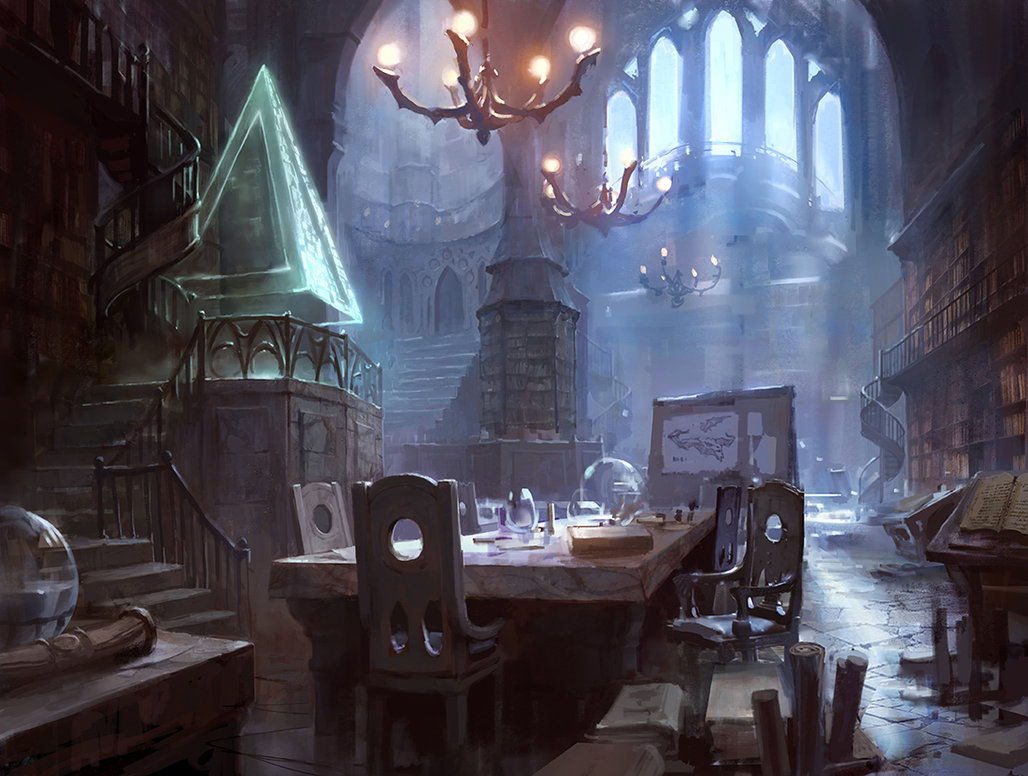 Jace's Sanctum by adampaquette
Depending on the academy a rune caster works and lives at, their surroundings can be quite lavish or quite sparse.   Academies like Remia Academy of the Arcane and Tarora Academy of the Arcane have great portraits and tapestries covering walls made of marble or sandstone in halls further adorned by vibrantly colored rugs and carpet, lit by grand colored glass windows during the day and ornate chandeliers during the night. The libraries use the same stone walls, carpeting, windows, and lighting but, have a vast number of tall, sturdy wooden bookcases and long tables and benches made from sandstone that have cushions placed on top to make them more comfortable to sit on for hours on end.   Academies like Basora Academy of the Arcane and Chatou Academy of the Arcane, on the other hand, are built using whatever stone is available, plain windows and sconces, and small libraries with shelves carved into the walls and small wooden tables and chairs.   Independent rune casters may make their shops as lavish or as plain as they like regardless of how much they earn or their skill level. 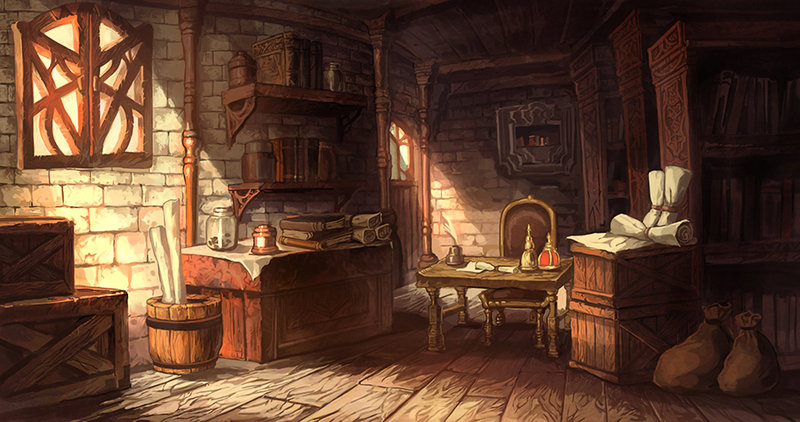 untitled 1 by drybread44
The one common factor every single workplace for a rune caster has in common is there is always a faint smell of blood lingering over the casters and their workstation. In the research rooms at the academies, the scent is stronger with the smell of copper is an almost overwhelming constant. In shops and academies more open to the public, they try to mask this smell with flowers, candles, and perfumes but the scent always bleeds through.

The casters who become researchers are in a small amount of danger if the runes they're working with have some adverse effect. Research assistants are in far more danger as depending on the researcher they work for; they can find themselves used as test subjects. If the research caster uses animal test subjects the danger of their research multiplies as some runes can have unexpected effects on the creatures and animals can lash out in fear and pain.

Rose knew it was impolite to stare. Her mother, goddess rest her soul, would have rapped her knuckles right there had she caught her youngest daughter doing it even though Rose hadn't been a child for over two decades now. Yet, she could not stop staring at the man going in and out of the small shop on the corner. Unloading boxes and crates from the back of a cart.   "So that's what a caster looks like," a voice said from behind her.   Rose jumped at the unexpected sound and turned to find the bakery Mary Barbary standing behind her. Mary unabashedly stared at the man while she wiped her hands on her apron, a smear of flour on her left cheek.   "I guess so," Rose replied, turning away from the other woman.   "He's as scrawny as I imagined they'd be after spending so much time in those academies of theirs."   Rose hummed faintly, neither agreeing nor disagreeing. The man was quite skinny and tall, giving him an almost bean or pole like physique. His short, messy, hair was a brownish-red color that fell over the spectacles he wore. His light blue jacket, tan pants, and bone white shirt were a bit dirty from the road, but Rose would bet all the fabric in her shop it was made of a material more expensive than she had ever touched in her whole life.   "Didn't think he'd look so normal though," the baker continued. "Or human."   Rose turned to look at her friend with a baffled look on her face. "Did you think he'd look like a demon? Or have blue skin?"   Mary shrugged, running one of her hands through her messy brown hair. "Everything I've heard about casters makes them seem almost inhuman. Plus, from what I've heard, some casters live solely at the academies who do have blue skin or are half wolf."   "You need to stop listening to the stories Arden tells. You of all people should know how much of a liar he is."   "True," Mary shrugged again. "But there has to be some truth to those stories. I mean none of us know what they get up to behind the walls of their academy. Or what he might do now that he's out here, miles away from his academy where no one can watch him".   "Well I for one am glad we have a caster in town now," Rose said, a tad sharper than necessary, as she placed her hand on her swollen belly. After her sister died giving birth to her nephew last year, Rose was angry with Mary for dismissing the good the caster could bring.   Mary's expression fell. "Of course, forgive me, I let my tongue get the better of me I apologize."   A tense silence filled the air between them that was finally broken when Mary took a step back. "Well, I have to get back to my shop. See you around Rose."   Rose nodded in farewell to the baker as she turned and retreated into her shop. The seamstress glanced once more at the small shop, but the young man must have finished unloading his things for he was speaking with the driver of the now empty cart. Shaking her head, Rose turned away and continued into the market. She'd wasted enough time lollygagging around.

Alternative Names
Casters(Positive), Jackals (Negative), Perverters of the Natural Order (Negative)
Type
Arcane
Demand
Rune casters are in high demand because of how small they are in numbers and the amazing things they can do.
Legality
Rune casting is entirely legal, much to the chagrin of the Kimirian people. The only laws in place are those that require a caster who works independently be subject to twice-yearly inspections by city guards.
Famous in the Field
Related Locations
Used By
Ranks & Titles

"Ink, blood, parchment, any surface"   I'm really curious: whats the difference between ink and blood when it comes to Rune Casting?   Other then that, a nice detailed article! Awesome :)

The only difference is that with ink the caster needs to maintain physical contact with the runes whereas blood provides a conduit through which the caster is technically maintaining contact at all times so they can go off and do other things.

That's an interesting take on the arcane-link idea. Blood sacrifice to make it more persistent, and due to the nature of how it works, it has to be your blood. Really neat! :)

Very interesting concept! Lots of potential for plot hooks and the sort with this. Are there any notable rogues or mad-men from the rune-caster group?

Well, there is Baron Gavriil Aukes who is famous for murdering over two dozen women while trying to figure out a way to prevent death from happening at all. And there are a few more whom the public doesn't know about.

Solid proffession work! I would have liked another small quote elsewhere in the text, or even another picture, as it is a lot of block text on mobile. Otherwise, a solid article!

I've actually been trying to find a couple images that might work but haven't been successful so far :/