Llyne, like all cities, towns, villages, and settlements within Aryia's borders are subject to laws and taxation passed down by the king or queen of the kingdom.

Llyne is surrounded by high, thick, walls that have turrets and towers that provide archers with a vantage point. The gates are made of thick reinforced metal and the parts of the wall directly above them have murder holes. Due to the city expanding numerous times, there are walls identical to these running through the city, that provide further protection to the people living in these areas.

The most important 'goods' that Llyne has are the rune casters in Remia Academy of the Arcane who give a portion of their earnings to the crown whenever a rune caster performs a service. After rune casters, Llyne's biggest industry is trade as they are the access point between the other nations on the Thaesia and the rest of the world. The city is also home to some of the best blacksmiths, coppersmith, tailors, jewelers, woodcarvers, and brewers, with good from each of these industries leaving port or being sold in vast amounts every other day. Within the walls of the city itself, the biggest industry is agriculture with the city having numerous festivals and celebrations simply to show off to themselves, and any visitor to their city, that they have the best bakers, butchers, pastry chefs, brewers, farmers, fishermen, and cooks.

In the wealthier parts of Llyne, every house has at least a small courtyard either made entirely out of stone with benches, fountains, and planter boxes filled with hedges or small flowering bushes or the courtyard is a neatly trimmed field of grass is flanked by huge hedges and shrubs with a stone walkway. Surrounding these homes, are roads and bridges made with high-quality stones that become less high-quality as it reaches the marketplace and less wealthy areas. Sewers bring water from the river into the city, where citizens can use wells to retrieve it for personal use or in case of a fire.   Outside the city, in the farmlands, windmills, and grainerys dot the landscape while watermills liter the river banks.

The Golden Circle: A knightly order dedicated to keeping the peasants safe from outlaws and nobles alike. The members of the Circle provide military support to Llyne and all of the other major cities in Aryia. The main headquarters are located within Llyne while local headquarters are found in all of the cities the order protects. In recent centuries, the order has focused more on combating outlaws than nobles.

Long ago, Llyne started out as a nameless hamlet that eeked out a living on the banks of a river whose people constantly feared attacks by bandits or the kingdoms of Grerin, Tapis, and Lales. It was from this hamlet the the House of Oweyn draws its lineage and eventually emerged as leaders. On their own, the people of Aryia were able to expand their borders some, making Llyne a proper capital city but, their growth only truly took off when Otwin Theudemar, Folcher Chlothar, Rosmunda Blackwell, Osanna De Rege, and Amelina Humbert brought their rune casting and their school Remia Academy of the Arcane to Llyne. Since then, Llyne ceased expanding after a decendant of Gautier Oweyn grew tired of war and signed treaties with the neighboring contries of Rushil and Visea. The treaties are incredibly resticting when it comes to declaring war so the only 'wars' these three countries engage in are the yearly tournaments they hold where soldiers, farmers, sailors, and anyone from any walk of life fight each other in gladitorial games for fame and riches, but most importantly to prove that their home country is better. 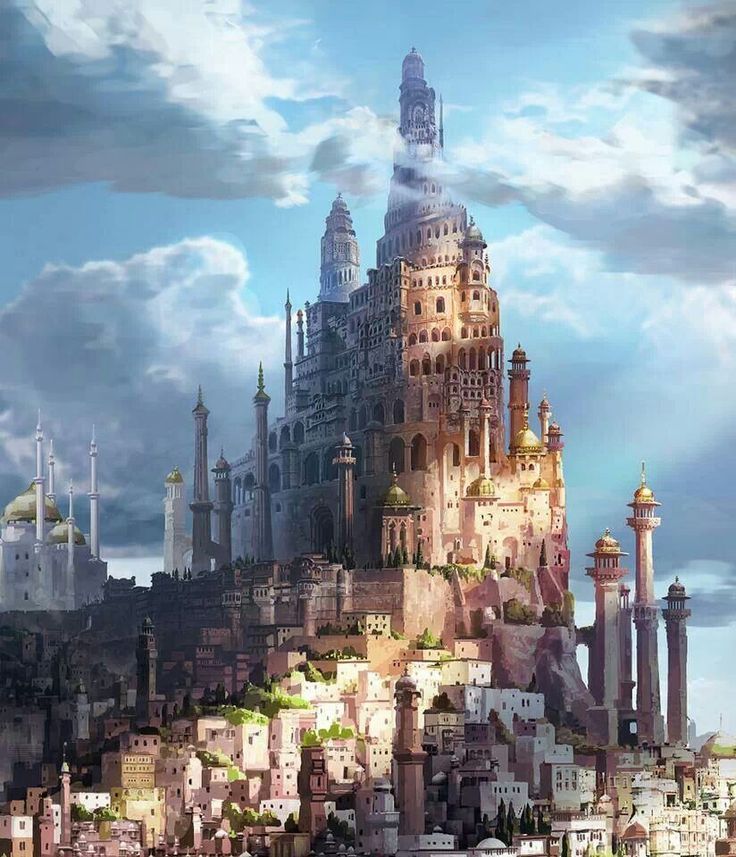 Alamut by Patrick Lambert
The architecture of Llyne is known to have a style that us superfluous and ornate with a desire for decoration with patterns, shapes, and detail worked together to create a visual effect that was both imaginative and impressive. Builders worked tirelessly to design newer and fancier ways to add decor and ornamentation to houses and buildings. Windows are distinctive in their design with shapes and size varying significantly. Window sizes vary between those in the second story and those in the first story through the windows for shops and homes of commoners tend to be fairly simple. Bay windows are a new trend amongst the nobles, who seem almost to be in competition to see who can have the most bay windows on their house.   Houses are built from wood brought in from the surrounding area while buildings are built using bricks made from clay. Both houses and buildings are colorful, with houses being painted in vibrant colors while the bricks are made from various colored types of clay. They also both have ornately carved window sills and lintels to further add to the ornamentation. The towers within the city are all octagonal and round with steep bell or cone-shaped roofs.

Llyne was built on the bank of a wide river and is framed by a small mountain range to the south and a slightly larger mountain range to the west. Surrounding Llyne are picturesque farmlands and gently rolling grasslands covered in bright and lightly scented flowers. Following the river north, leads to the Sea while following it to the south leads to a branching off point where the river splits to the east. The southern part of the river eventually leads to the marshlands that border the country of Rushil while the eastern part branches off three more times before ending in a crystalline lake.

From the area surrounding the city, Llyne receives a number of resources. From the forests nearby, the city receives its supply of wood while the fields and farmlands provide grain as well as many vegetables. Ranches provide the city with cattle, sheep, horses, chickens, and goats that provide meat, wool, milk, eggs, transportation and beasts of burden. The river provides the city with fish and also allows access to the city via ships that deliver and receive goods from other countries.

One of the founders of the Golden Circle

How do the Golden Circle interact with the rulers/nobility of the city? Is there ever any clash between them about (perceived or real) injustices or politics?

There have been a few clashes between the Golden Circle and the House of Oweyn over Remia's lack of transparency but because the rune casters offer so many services to the people of Aryia the Golden Circle has always backed off.

This was a big ol' read. Very detailed, I enjoyed it. Do they trade with any other cities?

I'm glad you enjoyed the article! Yes, they trade with pretty much every city that has a trade industry.

A very lore-ful and detailed article, I very much like seeing these. Excellent writing!   (I feel like where it says Llyne has ceased expanding in the history, there's a missing 'never'?)

Close, I put a comma in the wrong place and threw the phrasing of the sentence off.