The Goddess of Light

Fanenta was the first twin of Alpha and Omega, born alongside her brother Suhkor . She was created as an extension of the Gods, so they may have a physical presence in the world they created.

Her symbol looks vaguely like a sword impaled in the ground. At times simplified versions of this look similar to a cross, but with an extra tick at the bottom.

(I haven't decided on a name, but every winter there is a Fanentous holiday where the village will go to the temple and leave offerings are the Fanenta statue inside, before hosting large family gatherings for a meal. Giving other people a gift is also a common tradition, but not offering a gift to Fanenta is considered disrespectful.)

Fanenta is tall, pale and ethereal, like other high angels. Her skin is a pale gold and she had a large pair of feathered wings. Fanenta only has one singular eye in the center of her face, like her father. However her's is in the correct orientation and consistantly blue.   While she rarely used it, she did have a human form like her brother. In this form she was an average sizes woman with pale skin and long, flowing white hair. Her eyes would have a similar iris to her god form and they would glow. She wore a veil over where her mouth would be.   He wings and halo would also be part of her human form. Some paintings and statues depict this form with elf ears, even though she did not actually have them.

The power of Creation.

She wears a long pale blue robe with golden ties and accents. She has a large golden halo around her head.   However Fanenta is occasionally depicted with out clothes at all, as she was born to this world naked.

Her weapons of choice were five enchanted crystal swords.

Fanenta came to be, fully adult and on the surface, around the beginning of human civilization. She roamed the surface for quite some time before she would meet her brother. The two cared for each other deeply. Eventually they were both called up to the Overworld to make theirselves home.   As time passed they ruled over the Earth as they were meant to. Fanenta was always most comfortable watching the mortals from afar, but started to notice Suhkor frequently going to the surface to commune with the mortals. This bothered Fanenta, as she saw the mortals more akin to an ant farm, and believed constant devine intervention was tasteless and potentially dangerous.   Tensions rose when Fanenta discovered that Suhkor had somehow had a child with a mortal elf woman, and that she had given birth to a Demi-god. Fanenta kicked Suhkor out of the Overworld as punishment.   Not long after Suhkor created the Underworld and began collecting the sinful souls that Fanenta had started disallowing entry into Overworld. He would eventually build an army and attack Overworld, thus sparking the The Hundreds Year War .   After 200 years of fighting between each other, Fanenta defeated Suhkor. However prolonged exposure to the surface had greatly weakened both of them, causing Fanenta to have to retreat her soul into her crystal swords. .

Due to her soul being split into five pieces, her memories and personality was also broken apart. The piece of her that resides in the psychic blade is missing much of her memories. However these memories will come back to her once the blades are fused.

Fanenta believed strongly that as a god she had to remain responsible and not abuse her powers. While she cared for mortals, she deeply believed that direct interaction with them could cause severe problems in the long run. She also feared a mortal having access to more magical energy than they were mentally capable of handling.   She also saw mortals more like pets, and not the same species as high angels. She believed the idea of mating with one to be akin to bestiality.   Which is why the idea of a demi-god terrified and disgusted her.

Post war, her goals are to find a warrior suited to wield the swords that now contain her soul, as the world is now invested with demons and monsters as a result of Suhkor's actions.

She speaks in a very polite old english accent. Tends to use Shakespearean phrases and terms. She has a tendancy to talk in circles around people, or speak in riddles.   In the comic, she'd use a fancier looking serif font, compared to the normal handwritten font. by IbbyWondrous
A Statue of Fantenta on the great bridge.

Fantasme Imagination is being mirrored on BlueWondrous Wiki, so feel free to check that out too. 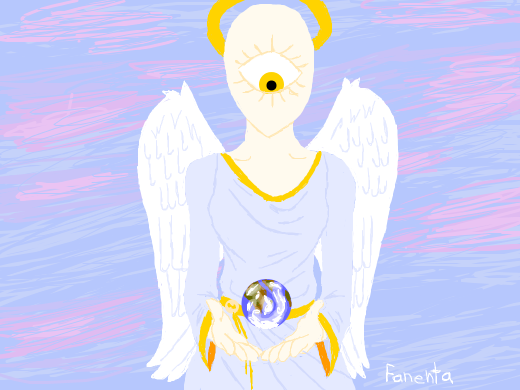 Divine Classification
Goddess
Current Location
New Earth
Species
High Angel
Realm
Overworld
Year of Birth
5000 BC 7016 Years old
Children
Gender
Female
Eyes
One
Height
20 ft
Known Languages
Fanenta knows every language in existence, as all she needs to do is read the mind of someone to learn their language.

Alpha and Omega are the gods that created space and time, New Earth and The Fantasme, and then disappeared with out a trace.

Suhkor was one of the twin gods and the son of Alpha and Omega, before he was destroyed by his sister Fanenta.

A group of High Angels that took the place of the Gods when all of them disappeared.

An elite race of angel like beings created by the gods and exist only in Overworld.

A collection of five powerful weapons that contain the soul of the Goddess Fanenta, and grant the user powerful holy abilities.

The Empire of Fanentous is the largest country in the Fantasme. It is named such due to their primary worship of the Goddess Fanenta.