"A young bronze dragon has taken up residence in Deepwater Harbor. It startled a few sailors recently but hasn't hurt anyone."
— Vajra Safahr

Zelifarn is an inquisitive and friendly Bronze Dragon who lives in Deepwater Harbor. He moved into Waterdeep's harbor in mid 1492 DR, where he has since made his home. In mid 1493 DR, he asked Sariel Liadon and Nathxena Fey for help investigating a strange vessel in the harbor, and has since become close friends with the two - especially the former.

Like all bronze dragons, Zelifarn has the innate ability to project a bolt of lightning from his throat up to approximately sixty feet away. He can also exhale repulsion energy in a thirty-foot cone, repelling anything in front of him a significant distance without major injury. However, due to his young age of only a few decades, he has still not mastered the ability to shapeshift. On the other hand, thanks to efforts from Sariel and Enna Liadon, Zelifarn has learned several spells.

Zelifarn was born on an island in the Sea of Swords, near the Moonshae Isles. While he was guarded by his parents for a few years, he was mostly left to his own devices to explore the seas and lands between the Moonshaes, Waterdeep, and Baldur's Gate. During this time as a wyrmling, he developed his curious and inquisitive personality.

In his teen years, he met an older bronze dragon by the name of Felgolos. Felgolos told Zelifarn much about the lands of Faerûn and beyond, further igniting the spark of curiosity within the younger dragon. He spent several years seeking out more metallic dragons, all the while avoiding the more dangerous chromatics.

In 1492 DR, Zelifarn was following a ship carrying some siege engines he was interested in. He remained hidden beneath it, following it for several days, until it docked at port. When he poked his head out of the water, he realised that he was in the middle of Deepwater Harbor. Zelifarn deduced that the Dragonward that protects Waterdeep did not extend into the harbour. Since right under the noses of the most protected city on the Sword Coast seemed like the perfect location for a lair, he scouted out a nice large cave, returned to his parents' lair, collected his things, bid them farewell, then moved into a lair of his own.

However, Zelifarn was not as stealthy as he seemed. Sailors in Waterdeep had alerted the authorities that they had spotted a dragon in the harbour, and these sightings were confirmed by sea elf traders and merfolk guards in Tharqualnaar. The Blackstaff, Vajra Safahr, summoned a group of adventurers to investigate the dragon. Zelifarn at the time was highly intrigued by a strange metal device on the bottom of some ships that had entered the city recently, and wasn't being as stealthy as he usually was. The adventurers were able to spot him and determine that he was no threat to the city. However, they refused his request to help him investigate the metal device.

Soon after, the ship and device left. During this time, Zelifarn primarily searched through shipwrecks in the harbour and beyond to expand his hoard. Due to him spending most of his time at the bottom of the sea, there were significantly fewer sightings of him. Almost a year after the ship with the metal device left, it returned. This time, Zelifarn actively sought to recruit someone to help him. He soon met Sariel Liadon and Nathxena Fey, who had been sent by the Blackstaff to once more check up on the dragon sightings. Sariel quickly befriended the dragon and swam down to near the bottom of Deepwater Harbor to investigate the device.

It turned out to be a stolen Lantanese submarine, the Scarlet Marpenoth, which was reportedly in the posession of the drow mercenary Jarlaxle. Satisfied with her help, Zelifarn gave Sariel a reward of a locked treasure chest from his hoard (that he had been unable to open without damaging. Instead of simply accepting the reward, Sariel offered to stay and talk with Zelifarn, answering any questions he had and sating his curiosity for a time. Within a few days, he had come to trust the half-elves, and permitted them entry to his lair. 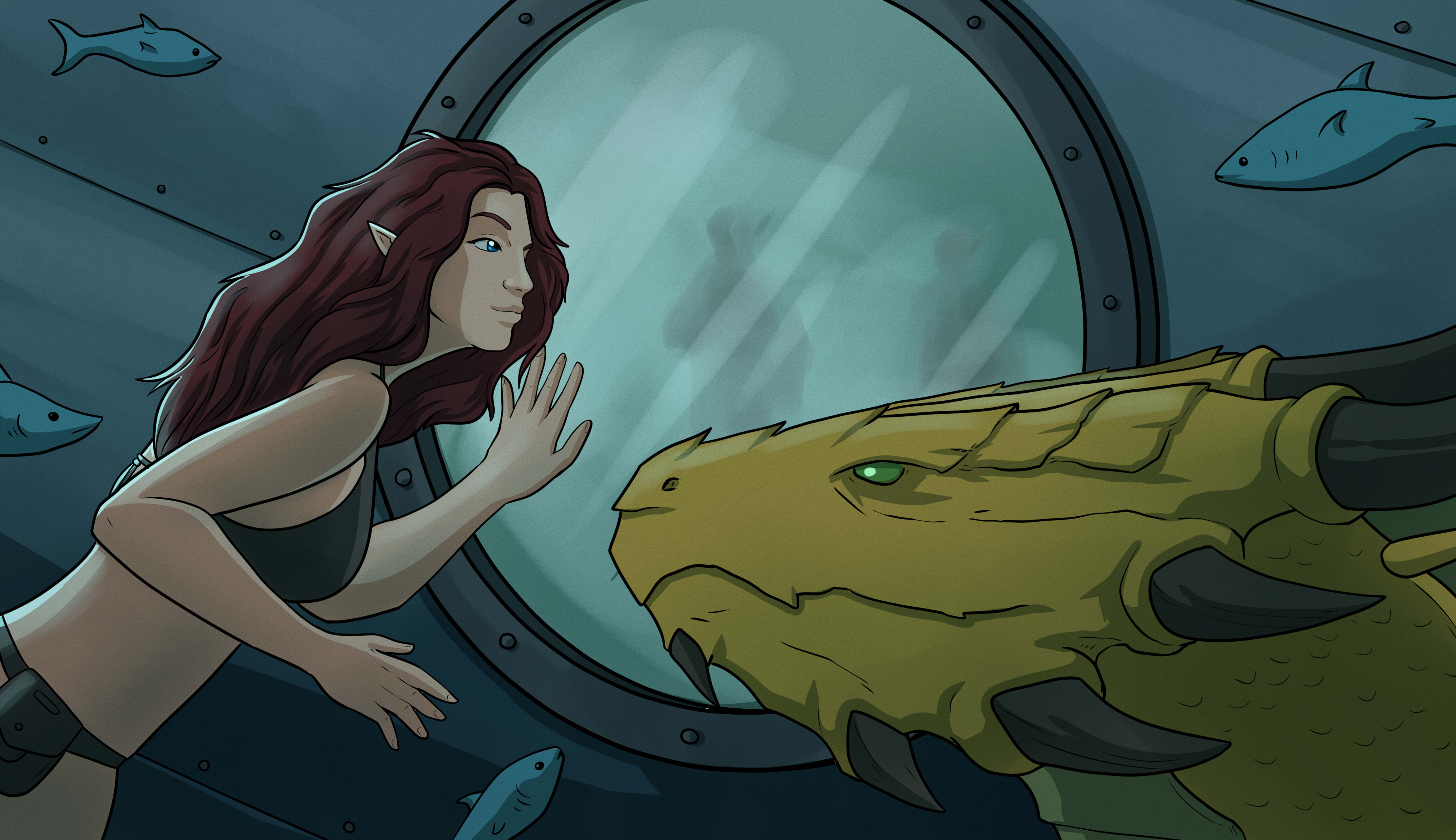 by SilkyNoire
Since then, Zelifarn and Sariel have become very close friends. When she formed the Arrowheads adventuring party, Sariel immediately invited Zelifarn to become an honourary member, which he accepted. Sariel has also vouched for Zelifarn to the Waterdeep city government, and requested he be permitted an exception to the Dragonward.

"Sariel, do you have any 'fashion tips' for me? I think I would look good in a cape."
— Zelifarn

Sariel and Zelifarn met in mid 1493 DR while the former and Nathxena Fey were investigating Deepwater Harbor at the request of the city government. Zelifarn had discovered a strange metallic vessel at the bottom of the harbour, and request their help in investigating. Sariel immediately assisted the bronze dragon, and the two have been friends ever since.

Since then, Sariel and Zelifarn have spent a significant amount of time getting to know one another and training for adventure. In early 1494, they and Nathxena set out to deal with a number of giant lords still plaguing the Sword Coast. When that was completed, Zelifarn was invited to join the Arrowheads as an honorary member upon its founding.

While Zelifarn is still learning the intricacies of humanoid communication, Sariel has already adopted a nickname for her new friend: "Zee" or "Big Zee".

Sariel and Zelifarn love nothing more than adventuring. Sariel is light and small enough to fit on Zelifarn's back as he flies or swims, and the two of them regularly set out to battle evil-doers and acquire treasure. Sariel also accompanies Zelifarn whenever he visits the underwater communities of Deepwater Harbor, even if her lung capacity limits how long she can stay at once.

Nathxena Fey is Sariel's girlfriend and an acquaintance of Zelifarn, thanks to her assistance investigating the vessel at the bottom of Waterdeep's harbour. Nathxena has also joined the duo on a quest to rid the Sword Coast of a number of dangerous giant lords. Since the formation of the Arrowheads, they have come to regard Zelifarn as a close ally and friend.

Emilia and Zelifarn were introduced to each other by their mutual acquaintance, Sariel Liadon. They quickly bonded over their mutual love of poetry, but were hampered by the fact that Zelifarn's lair is difficult to access at the bottom of Deepwater Harbor. For some time, Emilia was only able to travel there with Sariel's aid. Eventually, she tried travelling there on her own, but drowned in the process. Zelifarn was able to resucitate her, and she started a conversation like nothing ever happened. Even though Emilia can't quite make it to Zelifarn's lair on her own, she gets close enough to alert the bronze dragon that she'll shortly need resucitation. 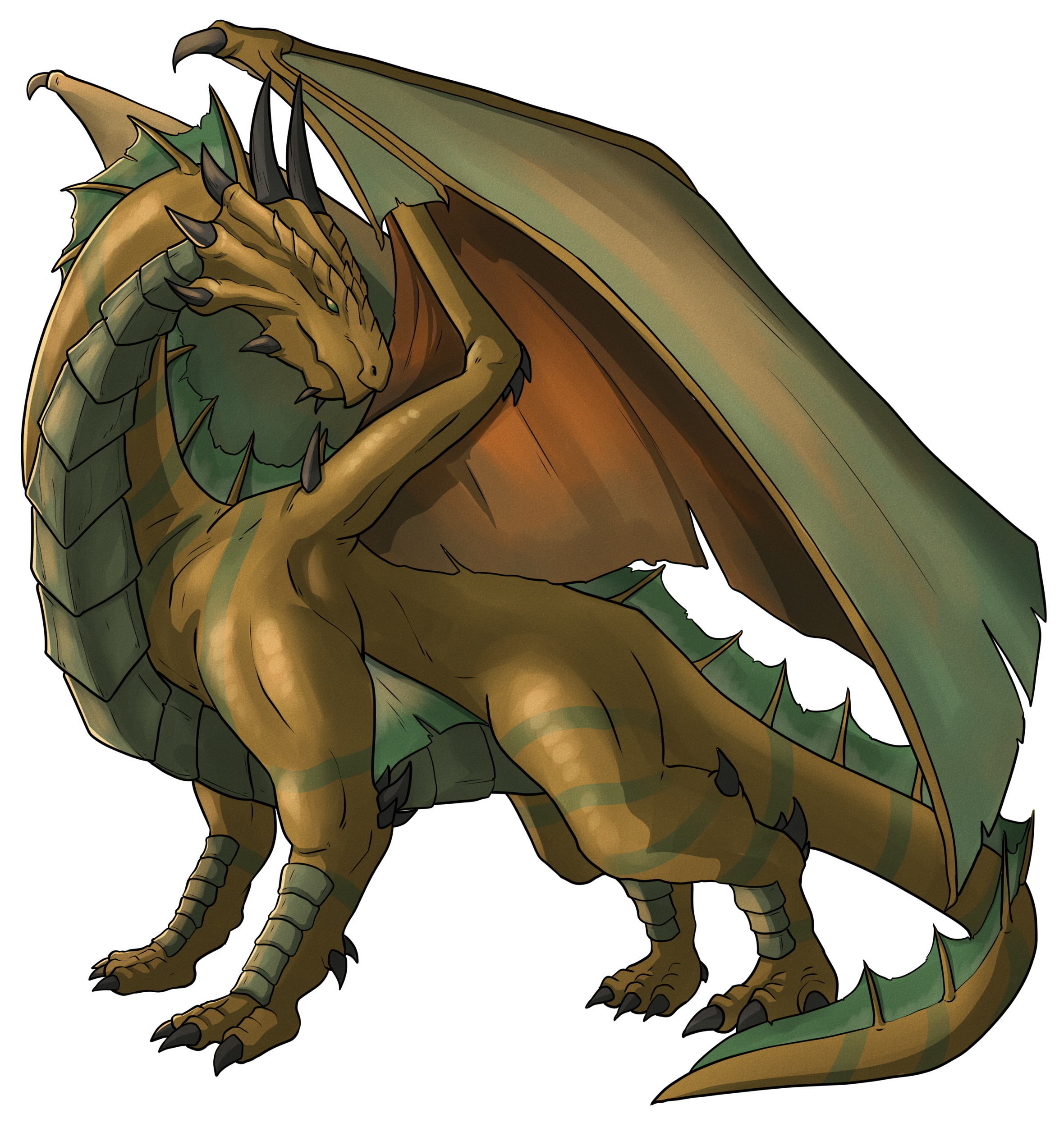 Zelifarn is a young bronze dragon who lives in Deepwater Harbor. Friendly towards strangers, he is also curious and inquisitive. Recently, he has become close friends with Sariel Liadon, acting as her mount and partner.

In combat, Zelifarn opens with his Lightning Breath, using his mobility to hit as many enemies as possible. While waiting for his breath to recharge, he attacks with his bite and claws from the skies. He tries to avoid being on the ground, staying out of range of melee enemies. His primary targets are those who can threaten him while flying, such as archers and mages.

"You should always find out as much as you can about everything before making a decision."

"I love treasure! It should be in my hoard."

"I'm too trusting of humanoids. They're so small and cute!"