Enna Liadon is a female half-elf bladesinger and member of the Arrowheads. Unwanted by her eladrin father, she was adopted by the Shiere Knight Elama Liadon shortly after birth. She has since trained to become a wizard and bladesinger, and left for the material plane to find adventure.

Enna was born in the Feywild to a human mother and eladrin father. She wasn't wanted by her father, who modified her mother's memory and returned her to the material plane, minus the years she had spent in the Feywild. While thinking out loud about how to hide his indiscretions from the Summer Court, he was overheard by Elama Liadon, who had been feeling guilty for months over leaving her daughter to grow up in Baldur's Gate instead of with her. Thinking quickly, Elama offered to adopt the young Enna and raise her as her own, never speaking a word of her true father to anyone.

As Enna grew up, she did so in the courtly intrigues of the Seelie fey and the Summer Court. She learned from a young age that the right word can be more powerful than a blade, doubly so if it casts a spell. Elama trained Enna in swordplay, and was surprised by her natural talent. While it took some convincing, Elama managed to convince a wisened eladrin bladesinger to tutor the young half-elf.

At the age of twenty, Enna decided she wanted to explore the material plane, where she believed adventure, fame, and riches awaited. She didn't have the best start, nearly getting run over by a horse not five minutes after leaving the fey crossing, but soon made her way to Waterdeep. There, she responded to an offer by a merchant looking to hire adventurers to go to Chult on an expedition.

That expedition turned out to be finding and destroying the Soulmonger in order to stop the Death Curse, which was spreading across southern Faerûn. Enna and her party traveled to Chult, where they spent one and a half months searching the jungle for the lost city of Omu. They eventually found it, and braved the Tomb of the Nine Gods to reach its bottom. There, they discovered the arch-lich Acererak and his unborn god - an atropal. With the aid of the trickster gods of Omu, they defeated the lich and destroyed the Soulmonger.

Following the events in Chult, Enna returned to the Sword Coast in order to further her knowledge of the Material Plane. At some point prior to 1494 DR, Enna unknowingly met the biological daughter of her adoptive mother - Sariel Liadon. The two became friends, but since neither mentioned their surname, they didn't realise they were adoptive sisters. It wasn't until both of them visited Senaliesse together that they realised their relation. Later, in 1494 DR, Enna was invited by Sariel to join the Arrowheads, an offer the bladesinger accepted.

As a wizard first and foremost, Enna is gifted in The Art and the study of magical theory. She knows a great deal about spells, even if she can't cast all of them. Her bladesinger training sets her apart from other wizards - she is adept at swordplay with a shortsword, very flexible, nimble, and skilled at acrobatics, and an excellent dancer. Enna is capable of planning well, coming up detailed and insightful solutions to difficult problems. Her brutal honesty is surprisingly effective when it comes to her persuasiveness. Enna is also skilled at stealth, and has trained herself to pick up on tiny details others miss when investigating.

While highly intelligent and charismatic, Enna isn't the wisest or the most perceptive of adventurers. She lacks in common sense, especially when outside of the Feywild. Although she is good at planning, she often fails to follow plans - even her own, if she sees an opportunity for a short term benefit (or even just something fun to try). Her small size and light frame mean that she lacks in physical strength, often struggling to move large pieces of furniture. Enna's brutal honesty doesn't always work, especially when she hasn't read the room properly - not an uncommon occurance with her poor common sense.

Enna's favourite colours are the oranges and browns of autumn. She enjoys the thrill of adventure and combat, loving to show off her prowess to her companions and enemies. During her downtime, she fills her time with experimentation - both magical and nonmagical. While she is a wizard, she has a strong fondness for the natural sciences. Unlike many people, Enna finds her home of the Feywild more comforting than the Material Plane.

Enna dislikes idleness, especially on her part. She constantly strives to fill her day with something useful to do. She also has a dislike for going to taverns, unless the tavern in question is The Bronze Dragon - which she loves. Much like her sister Sariel, Enna refuses to wear pants as much as she can, preferring short skirts and thigh-high stockings or boots. Finally, Enna has a strong dislike of honesty and dishonest people.

Sariel and Enna bumped into each other in mid 1493 DR when the former complimented the latter's outfit. They began talking, and soon realised they were both adventurers. They agreed to keep in touch, but both somehow managed to avoid saying their surname. It wouldn't be until a month later, during the Autumn Equinox, that they ventured into the Feywild together and learned from their mother that they were adopted sisters.

The two continued to keep in touch and visit the Feywild together, and go on the occasional adventure. About a year later, Sariel invited Enna to join the newly-founded Arrowheads adventuring group. Enna accepted immediately.

Enna occasionally refers to Sariel as 'Sis', but otherwise doesn't use nicknames. Sariel refers to Enna as 'En', especially when they're around Emilia Leveva, who Sariel calls 'Em'. Sariel also sometimes refers to her sister as 'Sis'.

Enna and Sariel are very similar, though Enna is slightly taller and larger. They share the Liadon family's dexterity, endurance, and charisma, even though Enna is not a Liadon by blood. The sisters also share a strong distaste for pants, preferring short skirts and thigh-high stockings or boots to pants. The two enjoy spending time together in taverns, where Sariel can draw most of the attention away from Enna. Enna's dislike of deception softens when around Sariel, and the two occasionally engage in pranks or thieving together.

Due to her specialty as a bladesinger, Enna teaches Sariel in the arts of swordplay, magic, and dance. In return, Sariel teaches Enna stealth, charm, and fey magic.

Enna and Valna were introduced to each other by Sariel Liadon when Enna joined the Arrowheads. During their subsequent adventures, they have become somewhat close, and very loyal to each other.

Enna and Valna are both students of magic, and although Valna casts druidic magic, she is an expert on arcane theory. The two often have debates and discussions about the nature of magic and the planes. They also spar regularly, as both are accomplished swordswomen. Valna (with Sariel's help) has attempted to teach Enna about archery, to little success. This is due to Enna vastly preferring cantrips and spells to arrows. 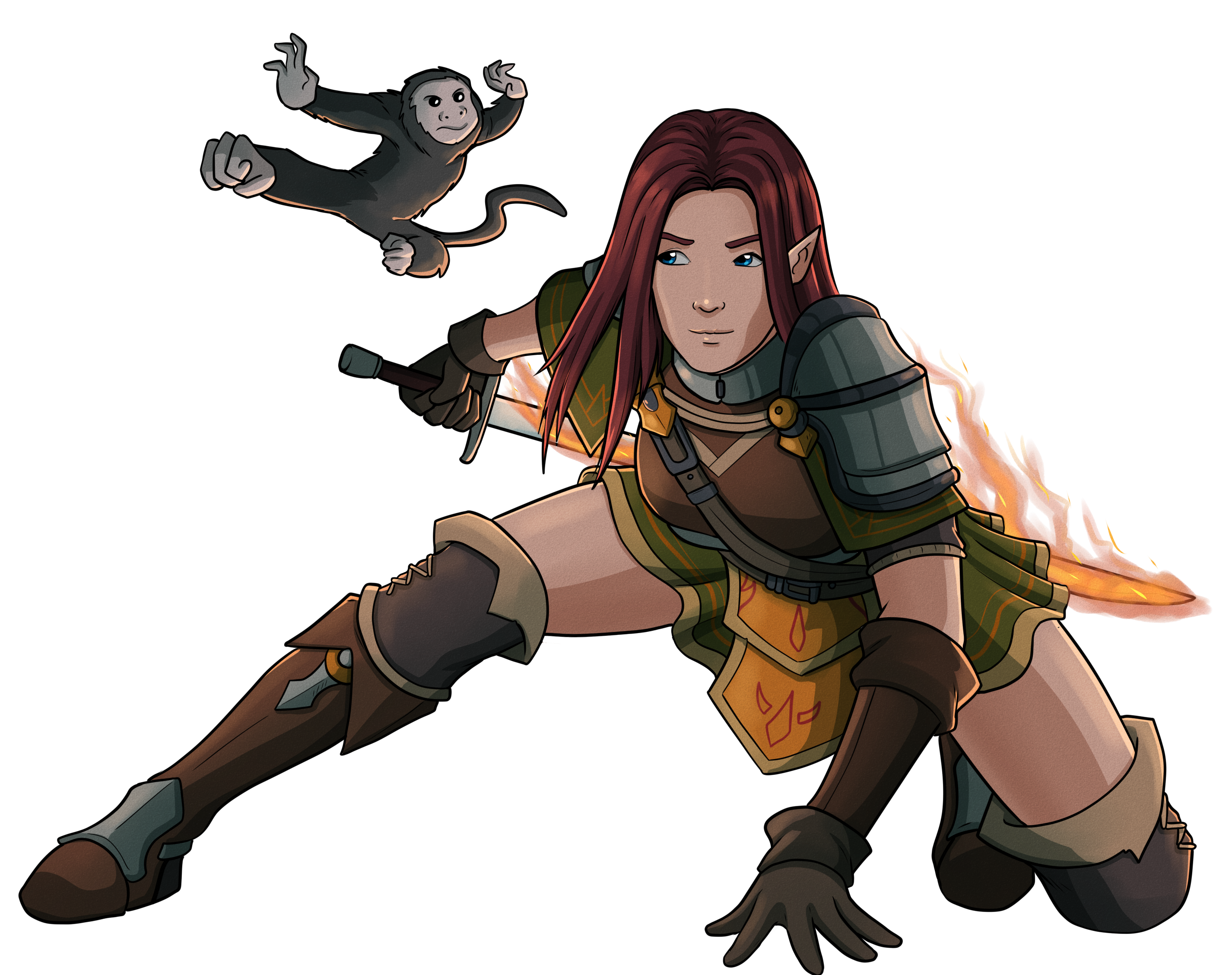 Bladesong (4/day). As a bonus action, Enna can invoke elven magic and begin a Bladesong, which lasts for 1 minute. It ends early if she is incapacitated or dons medium or heavy armour or a shield, or she uses two hands to make a melee attack with a weapon. She may dismiss the Bladesong at any time. While the Bladesong is active, she gains the following benefits:

Song of Defense. Enna redirects her magic to absorb damage. When she takes damage, she can expend one spell slot and reduce the damage she takes by an amount equal to five times the spell slot's level. 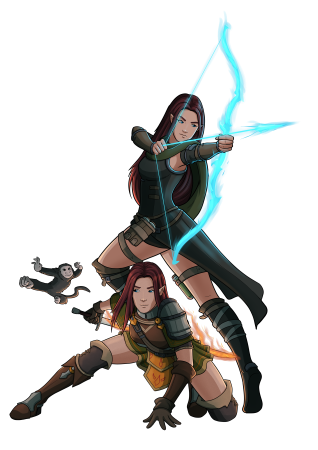