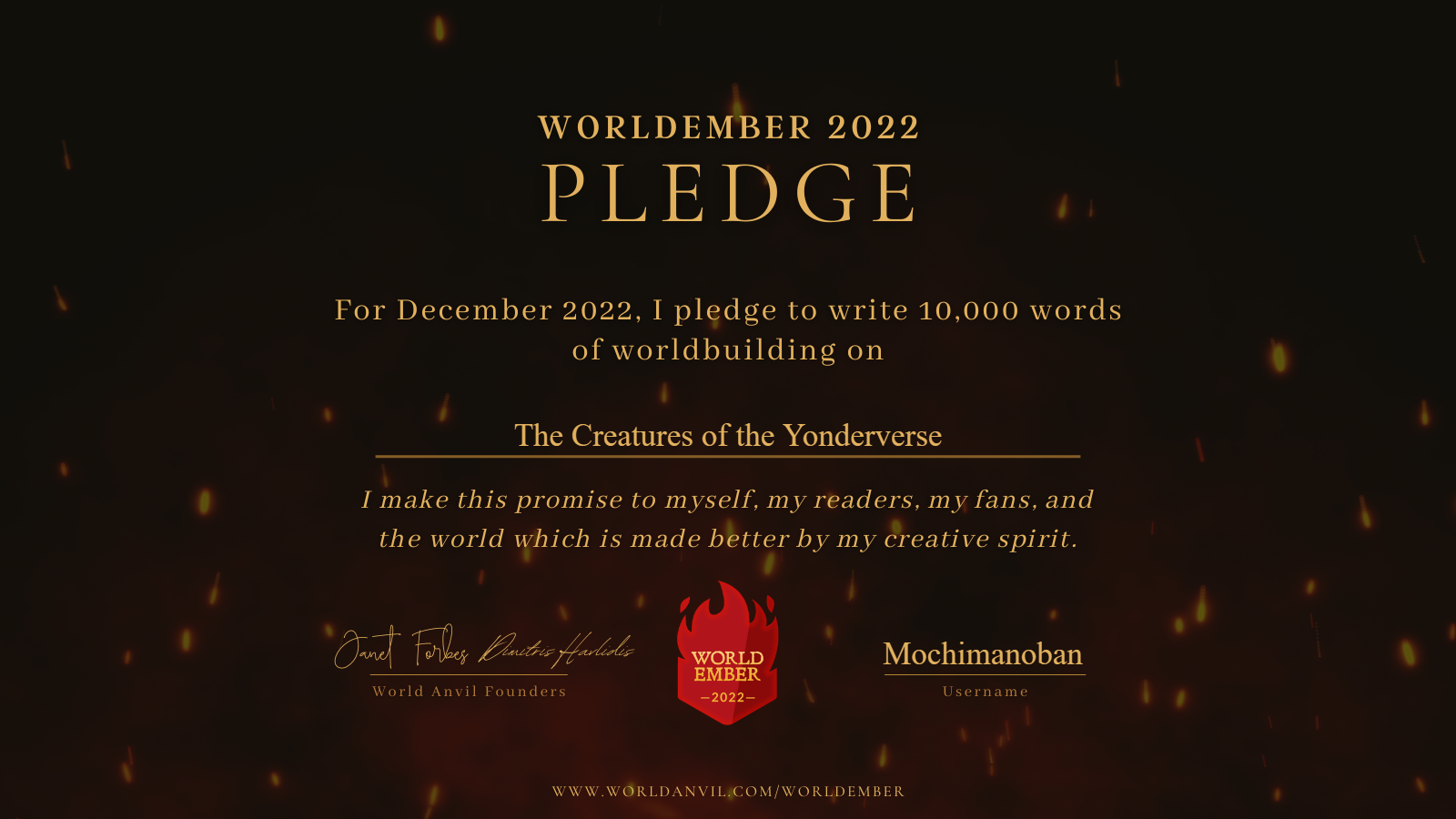 If you have more than one world setting, which one is the most important to you right now? Why?

Which area of that world setting will allow you to achieve your goals (Continuing your novel/campaign, or starting a new one?).

I will be focusing on the entirety of my setting, and it doesn't need to be said that I have a large setting. While writing about my species I will also be expanding other parts of my world, by making references to new locations, peoples, etc., that will all get articles after December.

How will it help you achieve those goals?

If I limited my writing to a smaller portion of my world then I'd be limiting how many species I can write. As well, having the entire Yonderverse to write in means I expand on the entire world, which is always nice.

Fun fact: If you think the list of species that need articles is long, wait until you find out I have over a hundred more species with articles! I have 400 named species in the Yonderverse, 233 of which in need of an article. It's safe to say I enjoy writing species!
(I am aiming for a thousand species in the Yonderverse, which might take a while)

Since I'm writing about the various species, the scope of my writing for WorldEmber is simply my entire setting. I probably will be focusing on different locations for a few days, trying to write about a bunch of species found there and then move on, because writing in a smaller area for a bit keeps me motivated, and is how I'm writing species in the COTY.

The themes will also change throughout the different articles I'll write. Different planets have very different themes: Osao and Cilvarth are two planets with a brighter and bubblier theme, while I have other planets like Nalmaria and Exio with a more horror theme. The species that live on these planets correspond to these themes, and if I'm writing about species from all of these planets (which I hopefully will), there will be no set theme.

My world is quite bright and colourful, with some areas that are a darker, more grim mood. I hope to write articles fitting all different moods during WorldEmber.

A planet in the Kurhira Solar System. Home to a species of sapient slimes.

A planet in the Kurhira Solar System. The people on the planet are fascinated by tea plants and everything they can make with them.

A planet in the Kurhira Solar System. Nalmaria is regarded as the most dangerous planet in the solar system, thanks to the species of giant spiders that exist worldwide.

A planet in the Ueran System. Exio lacks a core, and is instead just a sphere of water.

I am always inspired by everything around me to create species! I work with animals irl and animals have always been a big part of my life, so it's no surprise that I take a lot of my inspiration from real creatures. I also take a lot of inspiration from creatures in film, games, anything really. Two of my favourite game series are Slime Rancher and Subnautica - two completely different games, but both are set on an alien planet with a whole host of unique species.

Sometimes not even species inspire me to create species. Different colourful patterns I see, or cool plants and sceneries, all inspire me to design new species. I especially love looking at landscapes, as I like to imagine what kind of creatures might live there.

Dreams inspire me too. If I close my eyes, I can picture new species and then I'll scribble them down as fast as possible before I forget them. If I wake up in the morning after dreaming about animals, I'll make a note of them and then develop them later. A slight issue with that, I have tons of random species drawings scattered around my house and I don't know where they came from.

I love categories. The Yonderverse is very organised, categories galore. In fact, I have over 450 categories in the world. Each solar system has its own category, with each planet having its own category, which included an atlas and encyclopedia category. Inside these are every article you'd expect, that takes place on said planet. Things get a bit trickier when articles relate to several planets, but somehow I always find a way.

I'm not too fond of tags, as I find them to be a pain when I'm searching for an article. I am warming up to them though, and a few days prior to the Week 3 Prep being released, I did actually start adding tags to some of my articles. I plan on having at least 2 tags on each article - the template I used, and what planet the article is based on. I'm hoping to add tags to all of my articles before the Week 4 Prep is released, but considering I have over 600 articles that might take a while.

I've been making several tweaks over the past few months to my world, which aren't too noticeable but remind me that CSS isn't as scary as I think it is. I don't plan on making major changes to the CSS of the Yonderverse, especially not before WorldEmber, however I am currently in the slow process of reworking all of my articles and updating them to the new layout I have designed. This new layout uses the scrollable sidebar, with a "related articles" section at the bottom of the sidebar, and the vignette is the only other place where my writing goes, inside special containers I have made.

Here is an example of an article with this new layout >

The second largest city on Cilvarth.

And here is an example of an article before the layout >

A planet in the Kurhira Solar System. A harvesting planet, it is shared between other planets such as Karkhala.

As you can see, the older articles look more lacking. And yes, I purposely chose one of my largest articles in the new layout to make you think I write lots, because I don't. :)

I don't have many animals with art that need writing, because I lost my pen just a few months after getting it, and most of the art I made already have articles to accompany them. Here are some species that I'll be writing about during WorldEmber! 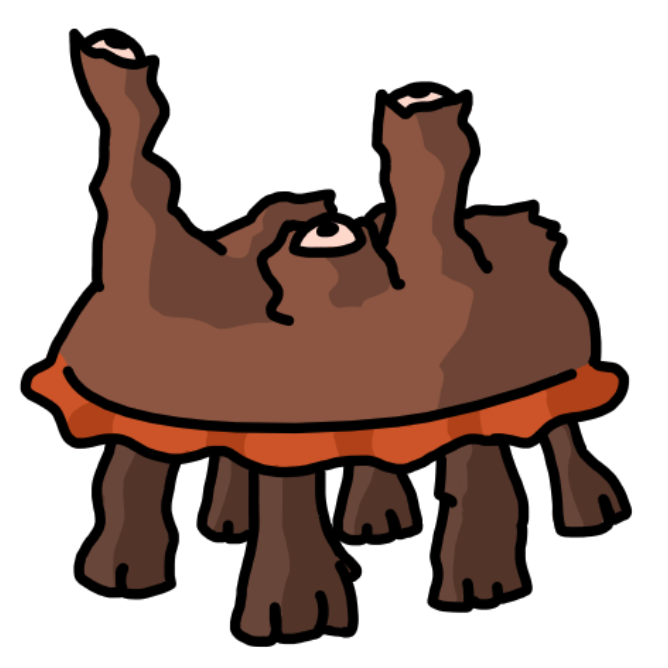 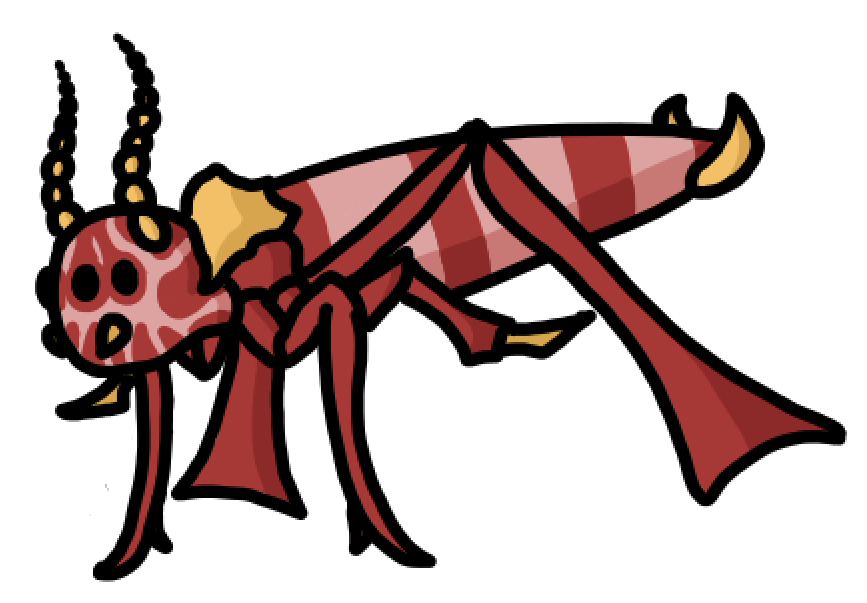 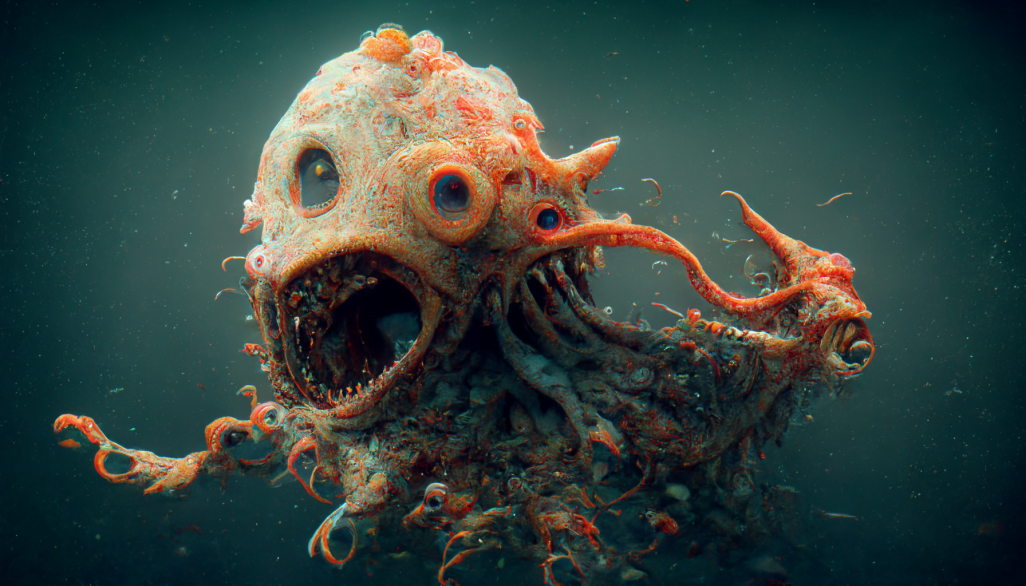 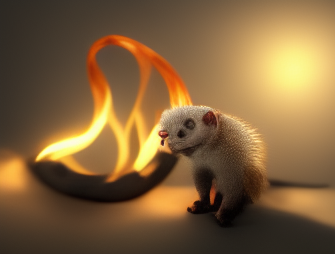 SO MANY SPECIES! Best of luck, Mochi, I hope you have a great time writing them!

Thank you so much! I am really looking forward to it and I'll make sure not to burn out xD

I want your axebat to be like swordsparrows in my world.

Are they giant flying mammals with axe-shaped heads? Because that's basically an axebat xD but also I need to know more about swordsparrows!

.....I ended up writing about things other than species about 5 days in xD as well, I wrote a lot of species I designed on the spot, rather than ticking them off the list D:

That's okay if plans change, sounds like you've had lots of fun!