GHG Session 9: We Have Scarier Things Than Ghosts to Worry About

Month 8, Week 4, Year 918
Ordering a couple rooms at the Sandbox tavern, two-thirds of the party waited for a meeting with Jezebeth Rahal while Windred and Zan'kiri hunted for rats outside. When Jezebeth finally made an appearance, the first thing she did was ask everybody for an autograph to add to her book of heroes. Argus noticed some notable figures like Adam Divisav and Kipp Vala had already signed, so he reluctantly added his name while Bubbles and the others sized her up. Her cagey answers left the party asking for more details on her knowledge of the area, but surely somebody who bought desserts for Bubbles could be trusted?   By the night's end Jezebeth had told the party all about the uptick in hauntings and bad weather around Ardin. She seemed skeptical of Argus' theory that the Sunken God was involved, but she told the group about an abandoned Elflands keep south of town where a valuable chalice could be found to protect the party from undead attacks. There were several other locations in the Treeleaf Union with a large number of hauntings, but the party agreed to collect the chalice before dealing with any of the other sites.   For practice Jezebeth led the group around Ardin that night to deal with some local specters. With a crash course in the undead from Zan'kiri the party fought off a trio spirits not far from downtown. One of them tossed Argus through a building and another sent out waves of necrotic energy that left Phaedra and Zan'kiri weak and exhausted. But by the fight's end all the group's spellcasters teamed up to deliver one devastating wave of magic energy that all but vaporized the poor spirits.   Back at the Sandbox Phaedra and Ys gave a middling performance for the barflies still awake, and Argus talked about Old Draconic lore with Jezebeth and promised to explore her library one day. The party had a busy day planned in town tomorrow, and after that the haunted marshes of Ardin laid in wait. 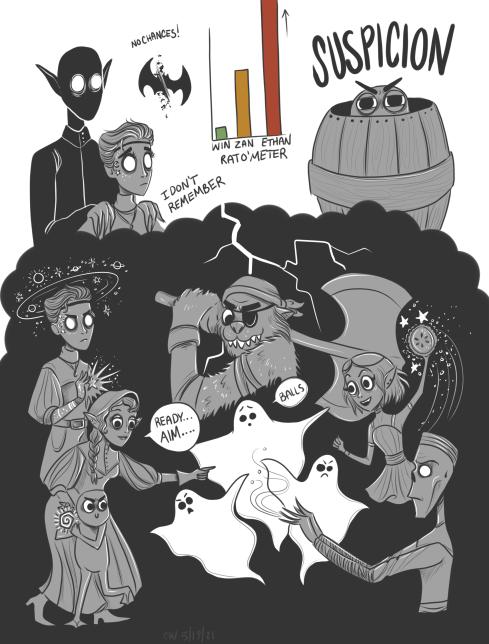