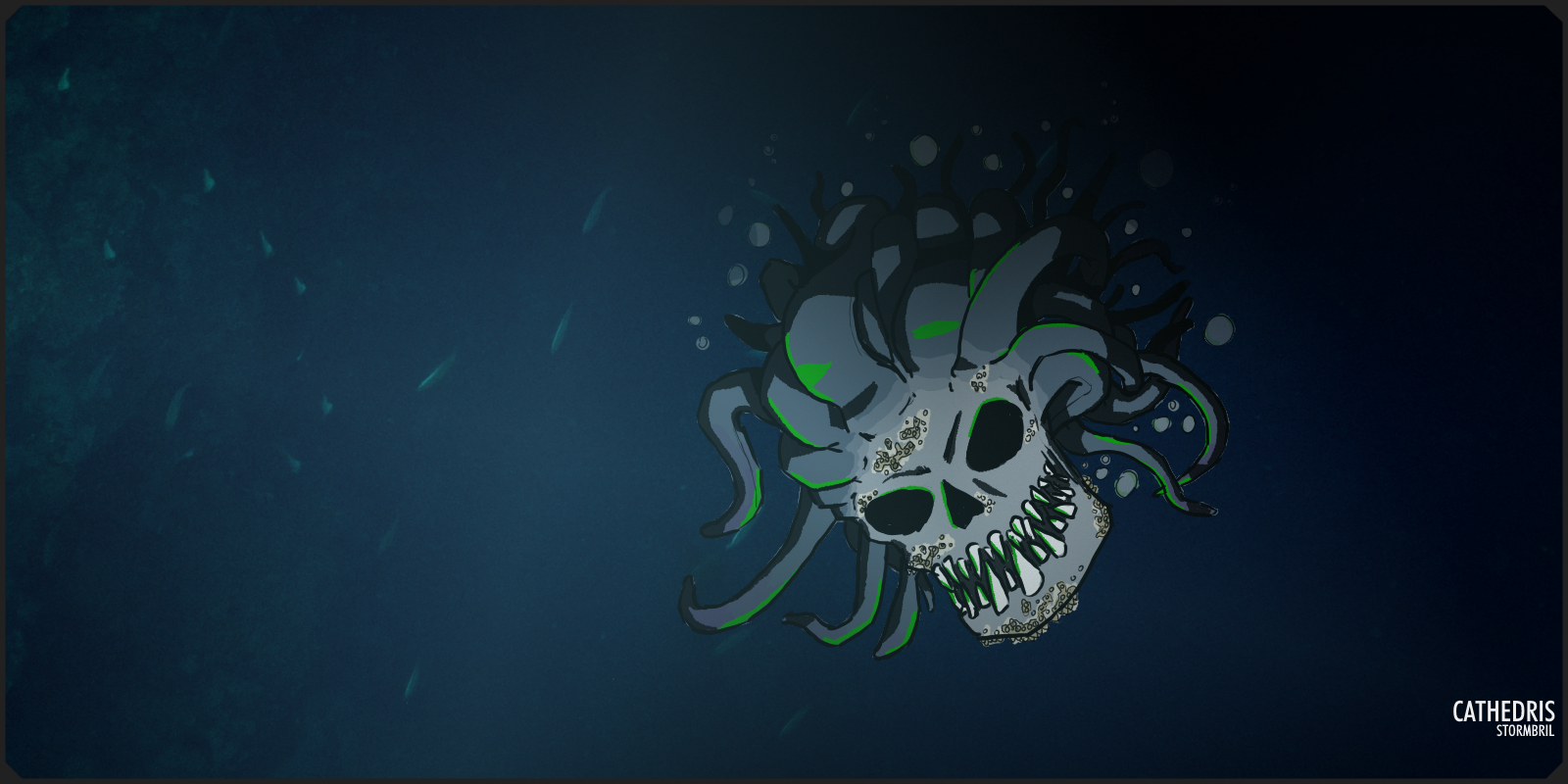 Her abandoned skull smiles at you from the deep

Captain, don't make me get back on that ship. I know you didn't see what me n' the rest of the crew did, but you gotta believe us -- it was huge, writhing, horrifing... and it smiled at us.
— First Mate in Fear

As far as most ocean biologists, and even most sailors, know, The Teneran Deep is an area entirely void of life. That section of ocean's propensity to open wide and suck down whatever used to be floating above has scared away anything that wishes to remain living. That is, almost anything, if a few sailors' tales are to be believed.   Some who have skirted the edges of the Deep, or even dared cross it, have come away from the experience with harrowing tales of a nightmarish beast -- a massive Rendling, comprised almost entirely of the remains of Miyu's long-ago severed head.

No single sailor has managed to lay eyes on the beast for long enough to verify its existance, or even give a firm description of it. Accounts vary from person to person, some swearing the head was nearly 100m across, while others reporting that it came in at a size roughly half that.

All witness do agree that the beast takes the form of a head, however. Common across all sightings is the fact that it appears to be a massive, dessicated skull, with tentacles writhing in place of hair.
While reports vary in the number of them visible, most seem to indicate that the teeth are numerous, and take on the appearance of long and thin curved needles. Some have said that the teeth were gnashing together, almost in a mocking grin, as the head writhed through the sea.

That's it, I'm buying land and startin a farm. Won't find me out on the water ever again, no way, nu uh.
— A Sailor's conviction

Beasts born of blood and nightmares; when Ichor gets in or on animals, they mutate into horrible monsters. Even worse are Rendlings born of old, discarded parts of God-husks -- known as Deific Rendlings, these beasts are mythical, incredibly dangerous, and nigh impossible to kill.

Enough eye-witness reports have come in that the Legion has opened up an official investigation into whether or not Miyu's Head actually is a Deific Rendling prowling The Teneran Deep. The process has been moving slow so far, and the Legion is yet to release any information confirming nor denying the existance of the beast.   Still, the Legion's silence is enough proof for many undecided people to begin believing in the monster's presence.

If the Legion ain't talking, it means they're hiding somethin, or they're up to no good. Mark my words, that beast is real.
— A Sailor's warning

A graceful combat art of patience, deflection, and opportune strikes. Its poses are studied from the swaying movements of the God-husk, Miyu.

Answering: "a plant or animal that lives in an inhospitable region"
Visit Stormbril's Competition Page Check all other answers to this prompt Competition Homepage

i like the 'if they dont talk it's real' reinforcing the general belief of it's existence. Quite the spooky thing especially on non-land where us humans aren't comfortable on. And i like the 'im quitting' quote haha. gave me interest to read more so it's a good article !   Happy summercamp !

Thank you, PBE! :D And yeah, you can always trust any organization in power to keep secrets.

I like that the Legion are taking these reports seriously. But given how the Teneran Deep is likely to swallow up any investigators, I can see why it takes them so long to get answers. I also like that the believers take the absence of these answers as proof that they're right - heh, of course people would do that. ^^ Great work!

Thank you very much! :D   Between you and me, the Legion are probably up to some terrible experimentation with whatever they're finding in this investigation...

I agree with that last sailor. I'm not going out on the water ever again if this thing is real. Horrible job, really, an absolutely terrifying article :)

Land: Solid, doesn't have ocean terrors from below, and far less likely to swallow you whole at any moment   Yup, that's a positive for me too! xD   Thank you <3 :D

Very horrific for the head to become a rendling instead of a husk... Do rendlings need to eat or are they just aggressive for the fun of it?   I also loved the "if they dont talk it's real" bit :D Does only taking blood directly for the god husk work for creating catalurgists? Or would it works if taken from a rendling too? Because it seems that the head of a god itself would be rather full of blood... I'd want to do some experiments too if I were them :p

They do appear to need to consume things, though their biology is not fully understood. If it's just for energy, or if it to give them matter to grow larger with, it's unsure!   Some have tried taking blood from regular Rendlings, and it's resulted in a horrific tainted kind of Ichor that did not work out nicely for all those involved. Some Deific Rendlings, the ones made from actual old parts of gods, have shown to have less corrupt, but still unsuitable Ichor within -- although testing has shown some interesting qualities.   So yeah, the Legion is thinking that an actual skull of a God-husk as a Rendling would be incredibly useful to capture and experiment with :D

Always up to something! :O

I'm sure it was obvious for a reason but ima just say "I knew it." I knew there would be a god husk involved here and of course, you delivered. Not something I'd like come face to face with. I'd start a farm to.

Muahahaha >:D It just seemed too perfect not to!