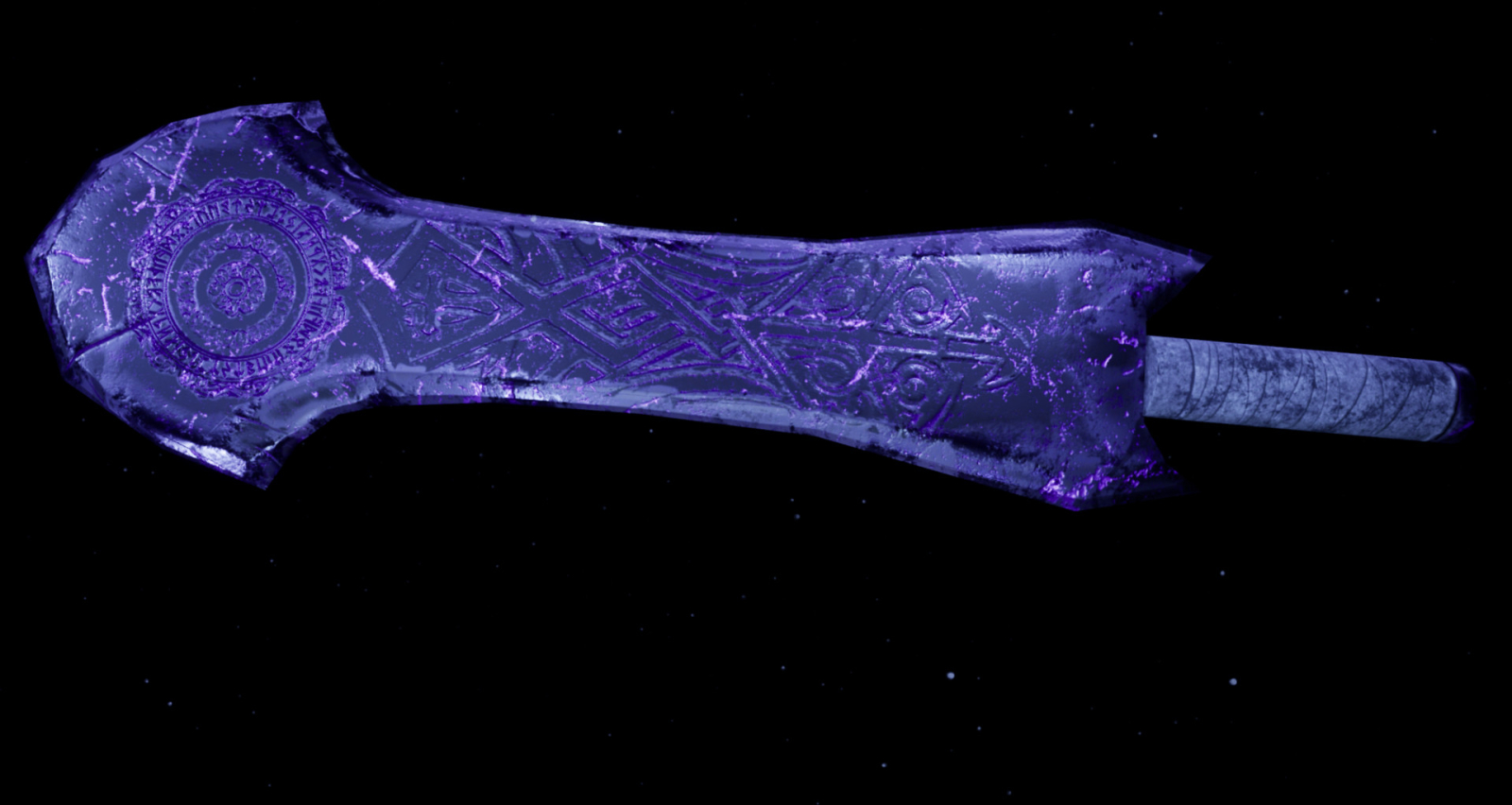 It is a greatly elongated blade with a heavy hammer head. It is also very thick. Too thick to cut anything; so it draws blood by bashing its victim like a mace.

Its deep purple depictions in art and stories propagates the tale that its made from obsidian. But the sword's fabled abilities is more allied to that of focus stones.
— metal worker of mist men descent

What gives the weapon its designation are the tumors of grey clusters that sprout from its glassy surface.

Every time blood splatters against it, tiny flakes of iron would emerge from the veneer. When it becomes drenched in the blood of enemies; the flakes turn to crusty orbs, then elongate into threatening spikes.
— retelling the exploits of the sword as a combat weapon

Every turn of the sword transforms it into something just a little more terrifying. It sounds like it would eventually become unwieldy. And it would; if not for the times it sheds its stakes so the blade is never not exposed to the fight.

There can be no doubt that the ancient glass forgers could have made an obsidian broad sword if they wished. Even with the additional attachments. The contention comes with the sword's purported properties.

This is just one more story on the transformative principles of blood. There's the blood gold mine in Tenula and the iron scythe of Hearts. We know for sure that half of these things exist, but what they all have in common is that they originate from Mist.
— culturalist and expert on the history of Mist

Seeing has how no ocumtitian has ever created an object, before or since, like the vampire sword; it is assumed by everyone not from Ocumtit that it was procured by some unknown outsider means.

The mountain mist men are famed for their medicine and focus stones. And while the blade is often described as being 'glass', it could also fit the description of a very large focus stone. Especially, when a stone's transmutative properties are taken into account; a Tetlachihuiani may just as well say:

a stone like that would appear to turn blood, or some component of blood, to iron
— a Tetlachihuiani's thoughts on the fabled blade

While this doesn't make it any less frightening, it does dispel the enchanted grandeur ocumtitians normally place on it.

It's not entirely clear how it made its way into the hands of the Pointed Chiefs. Ocumtitian nobles maintain that they themselves made it; as a part of ethnic pride.

Beyond its powers, the vampire sword also defies conventional sword designs. Whereas a normal maquahuitl is of a permanent or semi-permanent spine with disposable blade shards jutting out the sides, the legendary sword is entirely a long lasting blade.   The otherness of the sword made it distinct to its wielder's allies and enemies.

Its reputation was the first thing to strike the enemy. Fear of being drained of blood; and that blood being later turned against friends.
— Teek folklorist on the Gardener/Ocumtitian relations

Pointed Chiefs are chosen by "the strength of their arm". So it was a culturally shattering moment when it was never retrieved at the end of an inconclusive battle. The body of Cuācōatl, its last wielder was found with the sword nowhere near. The next chief panickly sought to replace it with no one noticing, but the damage was done.

A rare instance of truth beating out fiction.

Greatblade of the Naaru by Tom Bruck
Years after the blade's lost, it became a fashionable trend for nobles and generals to carry recreations of their lost sigil onto the battlefield, as a means to inspire and intimidate and distinguish ones battle-group to serve as a banner.   These have often taken the form of a large piece of obsidian banded in iron, but not always taking the shape as the legend is described. It ought to have been embarrassing with the frequency of which these mimicking blades would shatter in combat. Which is further proof that the original was not infact made of glass.

The grand explosions of glass that came from the failures of the replicated glass swords, nonetheless inspired an art form of alternative material weapons in the general shape of the vampire. These were of such expense that, naturally, only the rich could afford them. 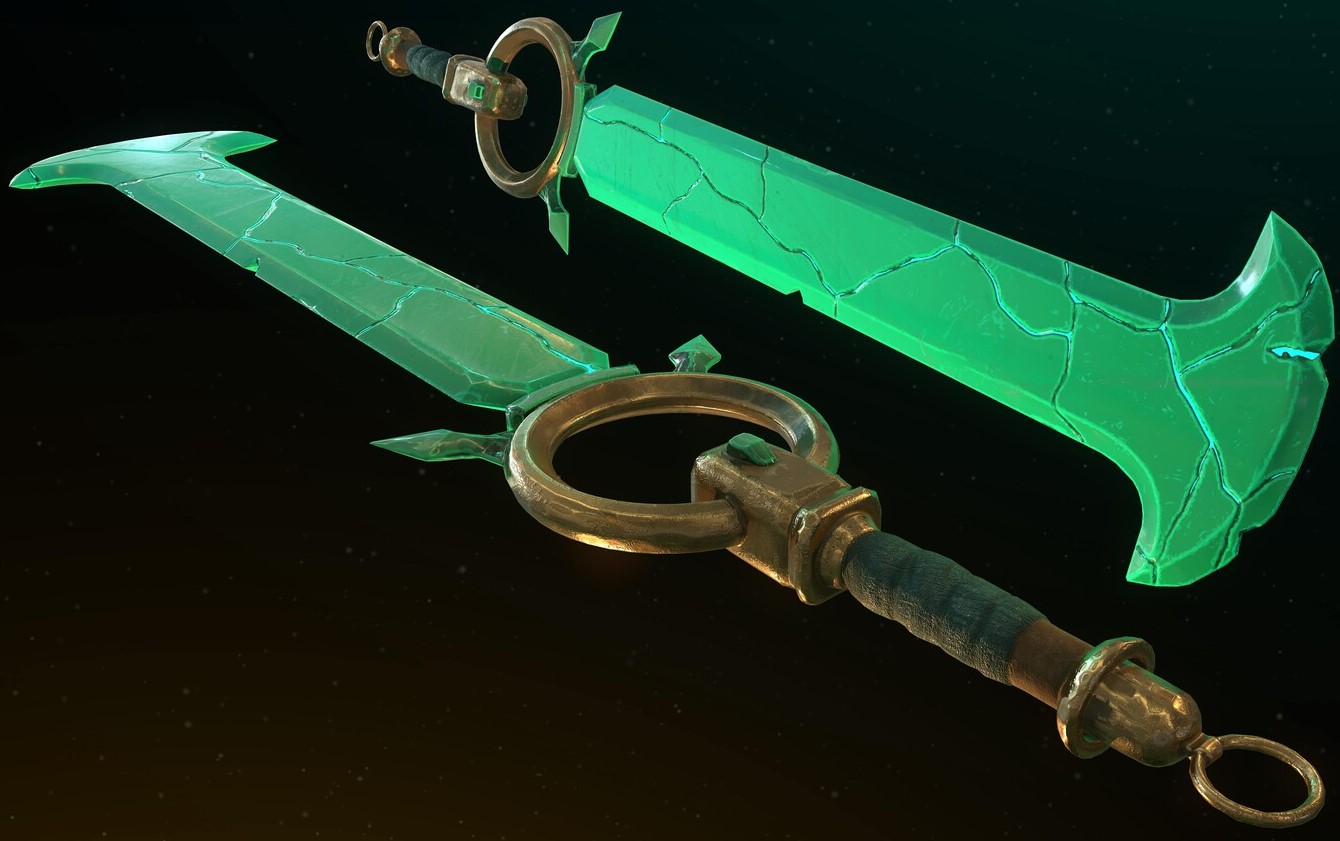 Jade, for its monetary and cultural value across many tribes, is the most sought after and most expense to commission.

Fume Ultra Greatsword by James Bolton
Short metal knifes of copper or iron are nothing new to the valley. But stretching it to the length of the sword makes for a heavy and cumbersome piece where agility is key.

Though, once in a while, some poor man with the mass to carry one would distinguish himself.   Their equipment is always easily dented and blunted and can be warped many times over in the step of making it.
— thoughts of Cuat'tallel

Answering: "Write about a myth or legend relating to a famous, long-lost item."
Visit hughpierre's Competition Page Check all other answers to this prompt Competition Homepage