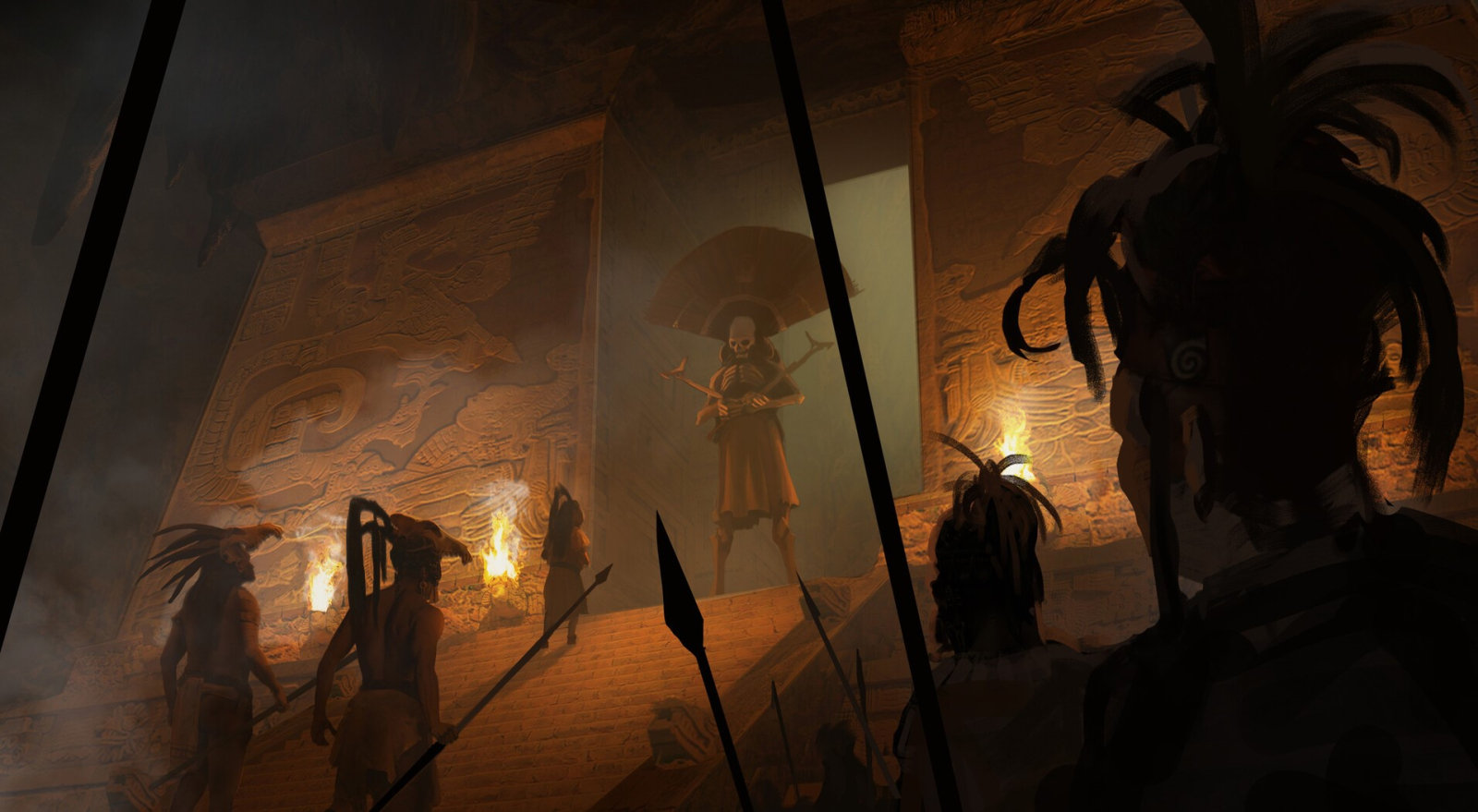 Prisoner of the Moon

It is important to face repercussions or ones' actions. However, Sangsalgu is a place where being sacrificed to the gods is both a punishment and an honour. For example, being publicly drunk at an inappropriate time of day would unquestionably haul someone to a holding cell under a temple to be later sacrificed.

Priests prowl the streets at dusk for families' wayward children possessing unruly hair, oddly shaped noses, everted navels, conspicuous birthmarks or some other arbitrary factor as reasoning to take them away.

However, there are crimes that are so culturally egregious that the perpetrator is deemed unsuitable and unworthy for sacrifice. There are very few who earn a spot within the moon tome, where such people are sent. Prisoners experience a great deal of alienation, whether or not they have the same background or cultural experiences as the priests and guards who deposited them there.

The player character has been arrested for some misdeed (perceived or not) and been thrown into an ill lit dungeon that is known to occasionally flood to the ceiling and no obvious way out.

The reason for this scenario is left to the GM's discretion. But some reason could be as:

The player character was put here to prevent them from interfering with some time sensitive scheme being acted against them or friendly NPC.

The player character broke some sacred rule of the city and has now been sentenced.

The character(s) can face exsanguination should they find the secret vault containing a cursed hoard of gold dust that climb to the roof. Touching any of the gold will siphon blood through their pores and kill them painfully.   A hint to this is shown via a shredded corpse collapsed atop small personal pile.   There are also several large pieces of art that are purposefully drapped over the piles in a stepped fashion.

Using the condition roll table, water conditions can range from warm to near boiling that may just harm their feet or be a warm bath.

Depending on how long the character has been trapped, they risk a weakening of their immune system and increased susceptibility to plagues outside.   Roll Constitution upon existing

Depending on the background/genealogy of the character, they may be susceptible to an allergic reaction to the prison's walls should they touch them at any point.   Should they successfully escape, its symptoms would follow them thereafter.

There are three conceivable exits in the tome:
Main Entrance
Existing through the same hallway the prisoner had entered and would likely encounter more guards.
Drainage System
Escaping through man-sized gutters carries the risk swimming through filth or drowning at the bends and traps in the sewer design.
Hidden Treasury
Reaching the top of the roof leads the player to a secret room behind the emperor's throne.

The water is the visible breath of the city
— Water Warden

Waterflow through the corner drains is occasionally reversed into the Moon Tome which gives the impression of the dungeons slowly being filled with water faster than it is. The water responsible for flooding the room comes from the floor gratings that follow the circular rim and not the corners.

Water mice are children employed to scrub the sewers and clear obstructions in the waterways beneath the city. A few will occasionally appear behind the stone drains to ridicule the prisoner(s) in a childish manner, but they can also be convinced to deliver useful items depending on social dynamics.

Retired eagle warriors feel that after decades of service, they have been demoted from servicing generals as part of a great army to securing a little-used dungeon for a civilian water manager.

A ring-shaped path that circles the central rock and from where the eight cells are attached. There are thirty small floor gratings, separate from the corner drains, arrayed at regular intervals on the rim from where the volcanically heated water emerges.

The Heart Spring that forces water through the city's water channels, and the very cells in the base, is also naturally boiling. Over the course of days, the water level rises ever higher which leads those left inside to climb to higher shelves at night and endure the suffocating steam until day break when the water recedes.

Depending on the roll, great heat can permeate through by the walls to warm the air or water.

Depending on the roll, steam would emerge to displace the breathable air which at best makes the prisoner uncomfortable, or at worst force heat air through their nose.

Depending on the roll, the water level can rise to the ceiling and totally submerge in the dungeon.

This scenario has very little combat opportunities. And few chances to talk or apply specialist skills. The aim is for players to think critically and explore the surrounding environment with few opportunities to interact with NPCs.

There is an uncoloured piece of art impressed upon the 7th cell's stone wall that is suspected to have been drawn by long ago by the speaker Yaretzal's queen's imprisoned lover.   It is normally invisible in the dark but, after hearing the story, water mice would seek into the normally vacant prison to show each other.

Roll Conditions for Round

Roll Health for Round

Answering: "Plot Special Category"
Visit hughpierre's Competition Page Check all other answers to this prompt Competition Homepage
In response to the prompt Create an article about a clever conflict you plan to introduce to your Main Character or your Player Characters. Explain why the plot is perfect to mess with their heads!

Thanks for the feedback.   I was not confident in my map making abilities, so I thought I would experiment with the columns and quote blocks to fashion a rough layout of the dungeon instead.   I was also hesitant to expressly state how the threats could be subverted without risking away the answer. Though I'm not sure how important that would be given that players may find unique solutions all their own and I would not want to stifle them.